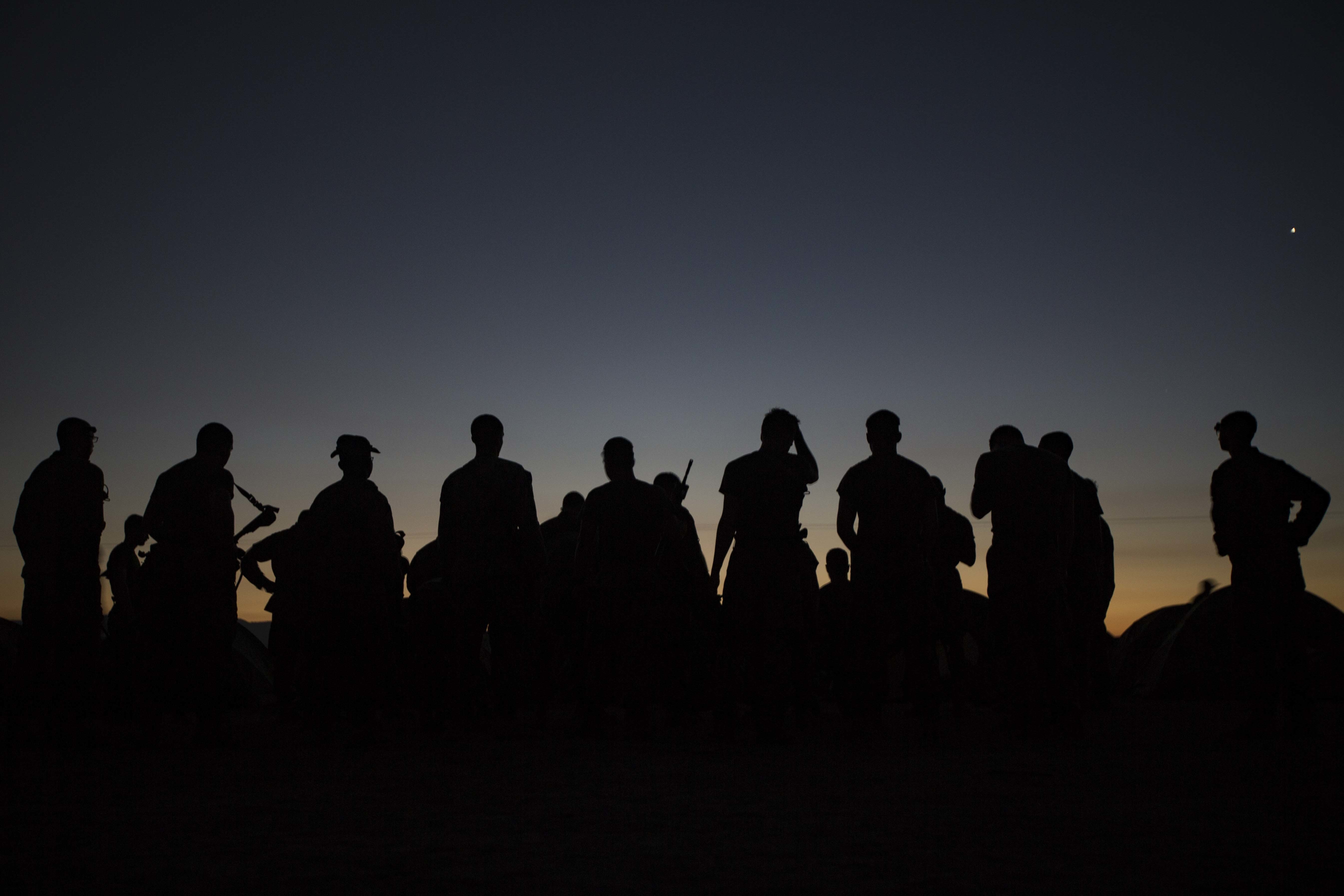 CAPITOL HILL – The next commandant may need to reduce the size of the Marine Corps and focus on a smaller number of priority missions, to ensure that the service can stay ready to meet its requirements under the National Defense Strategy in a resource-constrained budget.

Lt. Gen. David Berger testified before the Senate Armed Services Committee today ahead of a SASC vote on his nomination to serve as the 38th commandant of the Marine Corps. In his written testimony, he laid out his view on some tough choices the service needs to make to balance the readiness of the force, modernization of vehicles and weapons to win in a high-end fight and personnel costs.

“Among the most significant challenges I will face as the Commandant if confirmed will be to sustain readiness at high levels for our operating forces while concurrently modernizing the force – under constrained resource limits,” Berger wrote in response to policy questions from the committee.
“We will need to conduct a deliberate redesign of the force to meet the needs of the future operating environment. We will also need to divest of our legacy equipment and legacy programs and also consider potential end strength reductions in order to invest in equipment modernization and necessary training upgrades.”

With last year’s National Defense Strategy guiding Berger’s assessment, the general wrote that “the Marine Corps today is not sized, structured, and resourced” to perform all the tasks the NDS requires. He did not indicate how much the Marine Corps could shrink by but rather noted that a force design effort would be needed to guide the Marine Corps to optimize its size and makeup for the future operating environment. 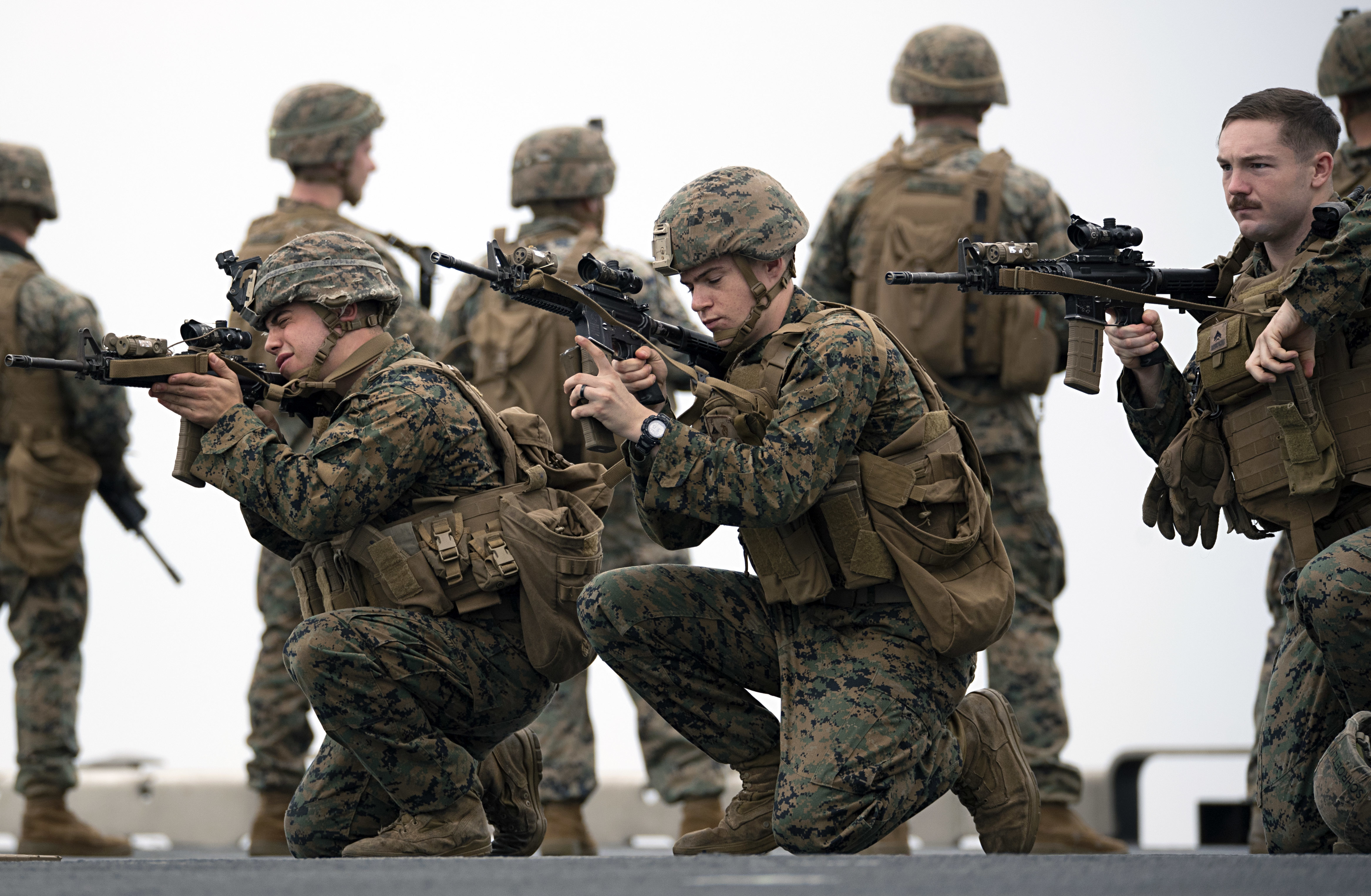 That growth trend could reverse, though, if hard choices have to be made to keep the Marine Corps within its budget constraints.

“The NDS focuses heavily on modernization, and modernization comes with a significant price tag. If confirmed, I will work with Congress to communicate the investments the Marine Corps is making and the purpose of those investments,” Berger wrote. The service is currently buying F-35B Joint Strike Fighters and CH-53K heavy-lift helicopters in its aviation portfolio and the Amphibious Combat Vehicle (ACV) and Joint Light Tactical Vehicle (JLTV) in its ground portfolio, among others.

“The NDS forces us to establish strategic priorities and make difficult choices – which will mean doing less in certain areas so we can do more in others,” he wrote, adding that Global Force Management tasks and operation plan requirements would guide the right-sizing of the force that could meet those requirements while maintaining a deployment-to-dwell ratio that is closer to the ideal one-to-three ratio than today’s one-to-two ratio, which he calls “unsustainable in the long term.”

Though Berger never states in the document what areas the Marines will do less in, he does highlight what he considers to be the service’s bread and butter. 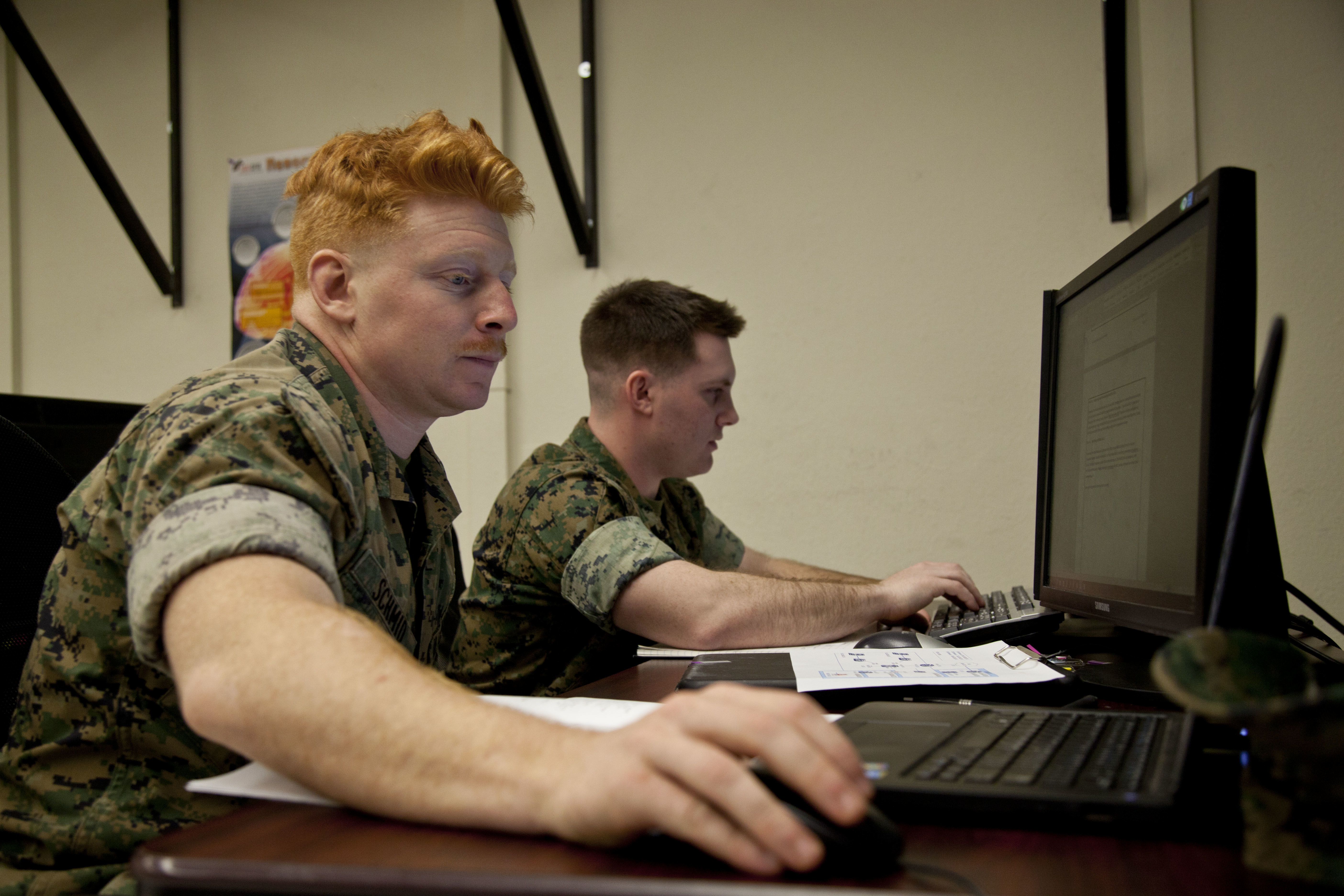 “Based on our assessment of the future operating environment, we have deliberately prioritized mission areas where we anticipate a gap between our current warfighting capabilities and the capabilities we will need to retain overmatch against a peer competitor. We are the nation’s crisis response force, which requires capable and ready amphibious warfighting platforms and a family of modern connectors. Our expeditionary warfare system must be networked, lethal, resilient, and must enable quicker movement to new technologies and capabilities faster than our adversaries. Protected mobility to enhance maneuver ashore remains one of our top ground warfighting capability investment priorities,” he wrote.
“The Marine Corps’ highest Ground Combat and Tactical Vehicle modernization priority is replacing the legacy Amphibious Assault Vehicle (AAV) with the Amphibious Combat Vehicle (ACV). The second highest priority for combat and tactical vehicle modernization remains the replacement of the legacy high mobility, multi-purpose, wheeled vehicle (HMMWV) fleet with the Joint Light Tactical Vehicle (JLTV). The Armored Reconnaissance Vehicle will not only replace our aging Light Armored Vehicles, but will effectively serve as our ground ‘quarterback’ platform using manned-unmanned teaming of ground and aerial platforms.” 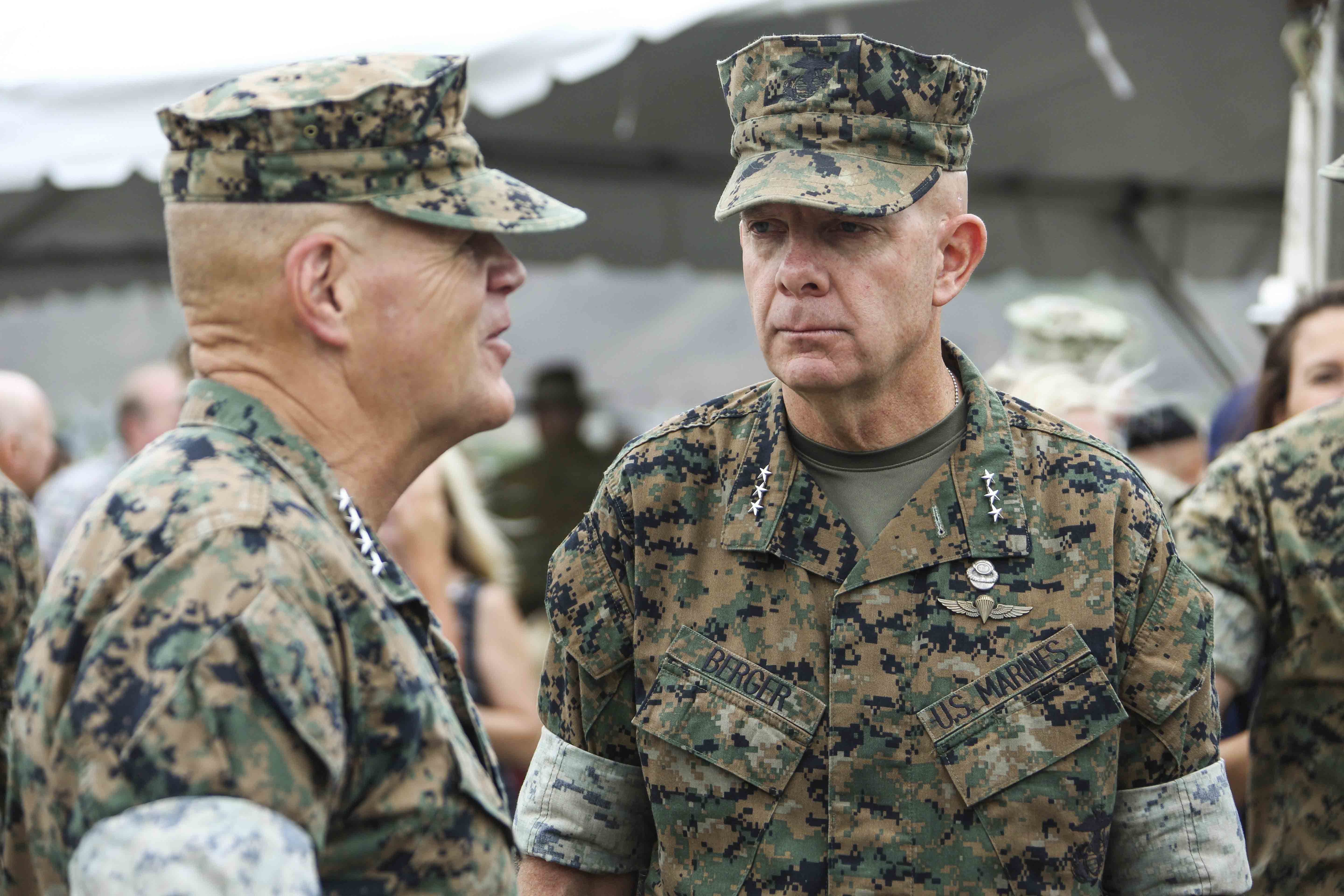 To supplement the investments in new platforms, Berger writes that the Marine Corps also needs to modernize in several areas to succeed in a high-end fight: command and control in a degraded environment, long-range precision fires, information warfare, air defense, protected mobility and expeditionary logistics. The service has already begun tackling all these technology areas to some degree and will have to continue to invest in them in the years to come.

Out of the Marine Corps’ control, though, is Navy investment in the amphibious ships that bring Marines to the fight. Berger noted that not enough amphib ships are ready and available for training, which limits the sea services’ ability to come together and train for a naval fight. The Marine Corps has made clear it needs at least 38 amphib ships – a dozen amphibious assault ships (LHD-1 and LHA-6) and 26 Flight I and Flight II San Antonio-class amphibious transport docks (LPD-17). Though the Navy remains in support of this goal, its FY 2020 budget request sacrificed spending on an LPD to buy another submarine, which was deemed a more urgent warfighter need.

Berger called for major upgrades to the amphibious ships to support future warfighting with high-end aircraft like the F-35B.

“Our endstate is that all amphibious ships have the capability to downlink and share F-35 data. The Navy has already installed on several amphibious ships the new capstone Ship Self Defense System (SSDS), which brings the Cooperative Engagement Capability (CEC) and Link-16 to the platform. Five Landing Helicopter Docks (LHDs) are scheduled for similar upgrades over the next five years. This system provides a critical combat capability which will integrate with F-35s over Link-16,” he wrote.
“We have fielded a system on select amphibious ships that enables post-flight data from the F-35 to be disseminated to warfighters and analysts at a lower classification level. We have also begun to install Marine Corps Common Aviation Command and Control System (CAC2S) on amphibious ships. This is a new capability being used by USMC tactical air defense controllers and air control electronics operators. CAC2S enables aircraft to become a forward sensor for the command elements embarked on Marine Expeditionary Units/Amphibious Ready Groups (MEUs/ARGs), providing greater situational awareness and faster decision making.” 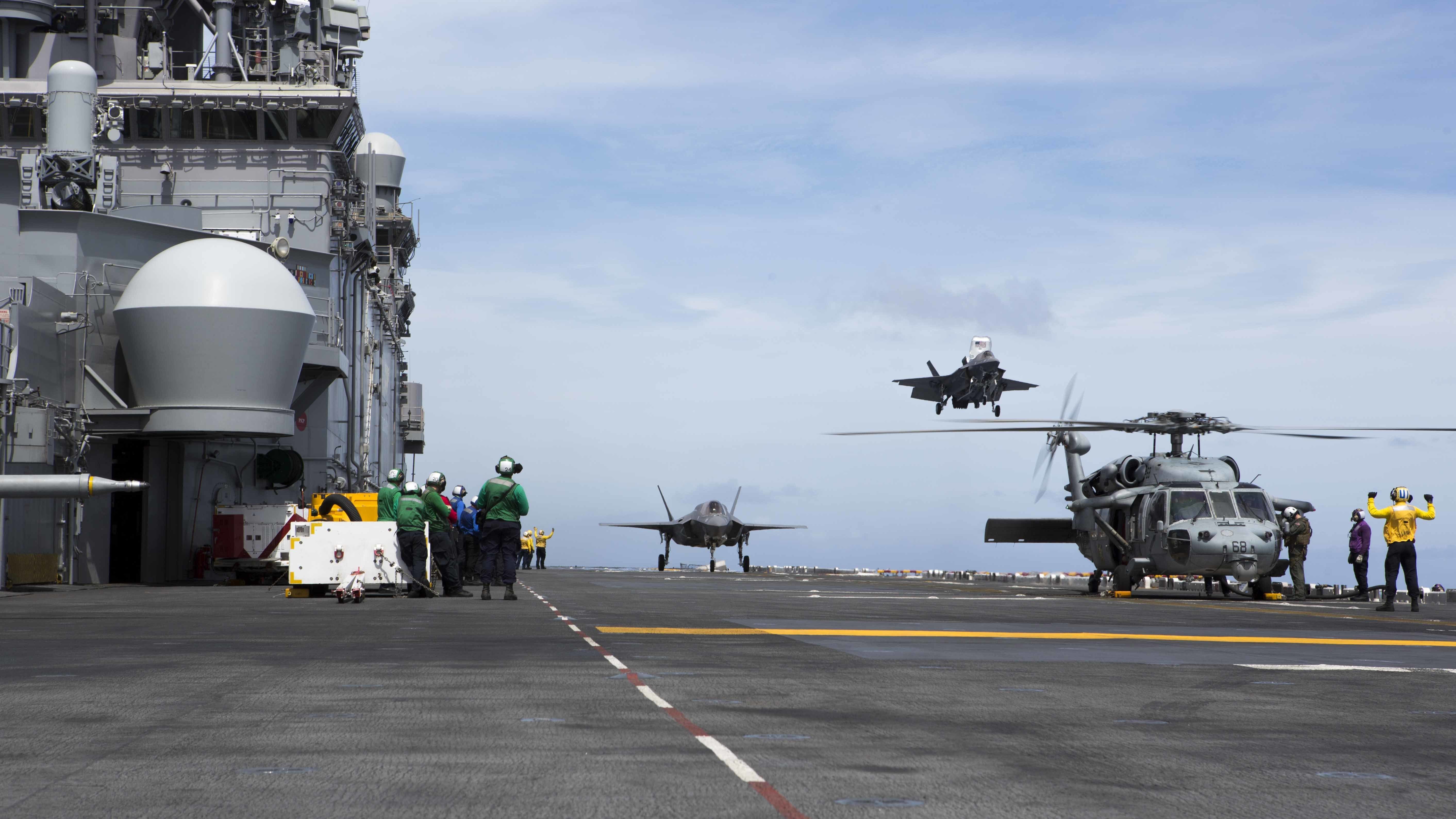 The Navy, for its part, also faces difficult decisions as it balances readiness and modernization, but it has made clear it is a growing service to man a growing fleet.

The naval fleet will grow by 66 ships between now and 2034, and a new force structure assessment taking place this year could further increase the planned fleet size. Still, whereas the Marine Corps’ smaller budget and vast modernization needs are forcing Berger to consider downsizing, the Navy’s attempt to balance readiness and modernization includes an assumption that the service is on a steep growth path.

“Maintaining the right balance between readiness, capacity, and lethality is crucial to providing options to decision-makers. Near-term readiness will be paramount to ensuring our deployed and deploying forces are prepared for any challenges they may encounter,” Moran wrote in his policy answers.
“Still, we must field the future fleet, the ships, aircraft, and systems with the technology necessary to maintain the edge on our adversaries in a rapidly evolving world. If confirmed, I intend to make strategy-driven, data-informed decisions in balancing the near-term capacity with future capability requirements.”