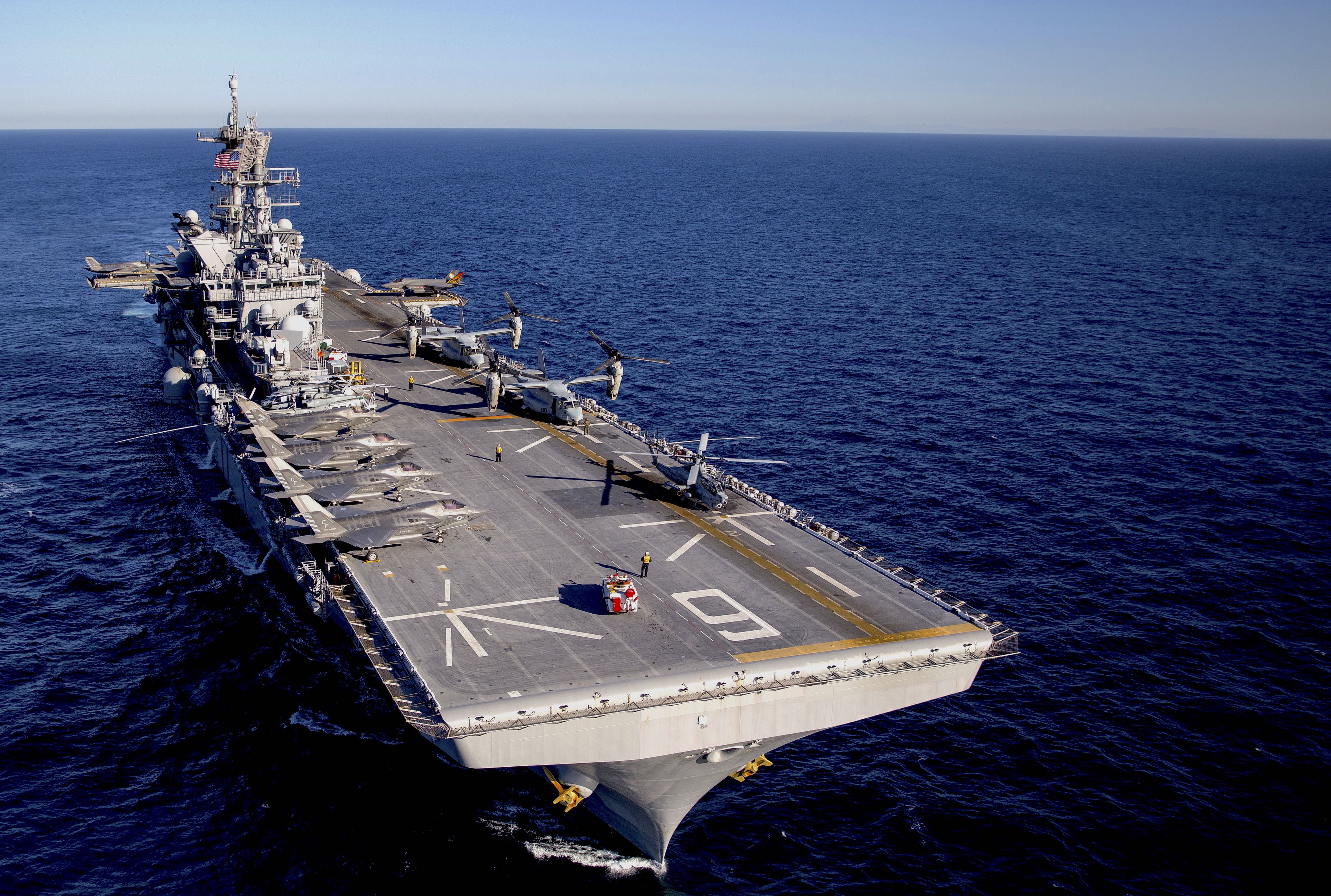 An early look indicates America’s larger flight deck may make up for the ship’s lack of a well deck, 31st MEU Commanding Officer Col. Robert Brodie said this week – but partly because the 31st MEU emphasizes light, maneuverable gear and does not operate tanks in its ground force.

Brodie, speaking to the Potomac Institute for Policy Studies on April 23, said the new ship will still accommodate the full complement of people and gear the MEU wants to bring with it to sea but that leadership will have to be a bit imaginative to work through what those operations look like without a well deck on the amphibious assault ship. The current big-deck the MEU uses, USS Wasp (LHD-1), has room for three landing craft air cushions (LCACs) or two landing craft utilities (LCUs), and swapping Wasp for America next year will take away that ability to move people, vehicles and supplies ashore by surface connector.

“What that means for us is that we will have the America-class ship that is coming out, and that does not have a well deck. So we’re right now not ready to talk about what that means, but we’re thinking through conceptually how we’re going to configure our force to be able to maintain our crisis response capabilities out there,” Brodie said.

31st MEU was the first to go to sea with the new F-35B Joint Strike Fighter, which is larger than the AV-8B Harrier it replaces. While the MEU is looking at how to integrate the new plane into its operating concepts, it’s also looking at more basic things like “working through deck space issues, so I’m right now kind of building some knowledge base with the Navy in how to spot aircraft.”

As a result of trying to learn how to launch and recover, move around and maintain the larger aircraft on the flight deck, Brodie said he only brought 10 MV-22B Ospreys with him on the last float instead of the usual 12 to allow more space as the Navy-Marine team learned how to best handle the F-35B. 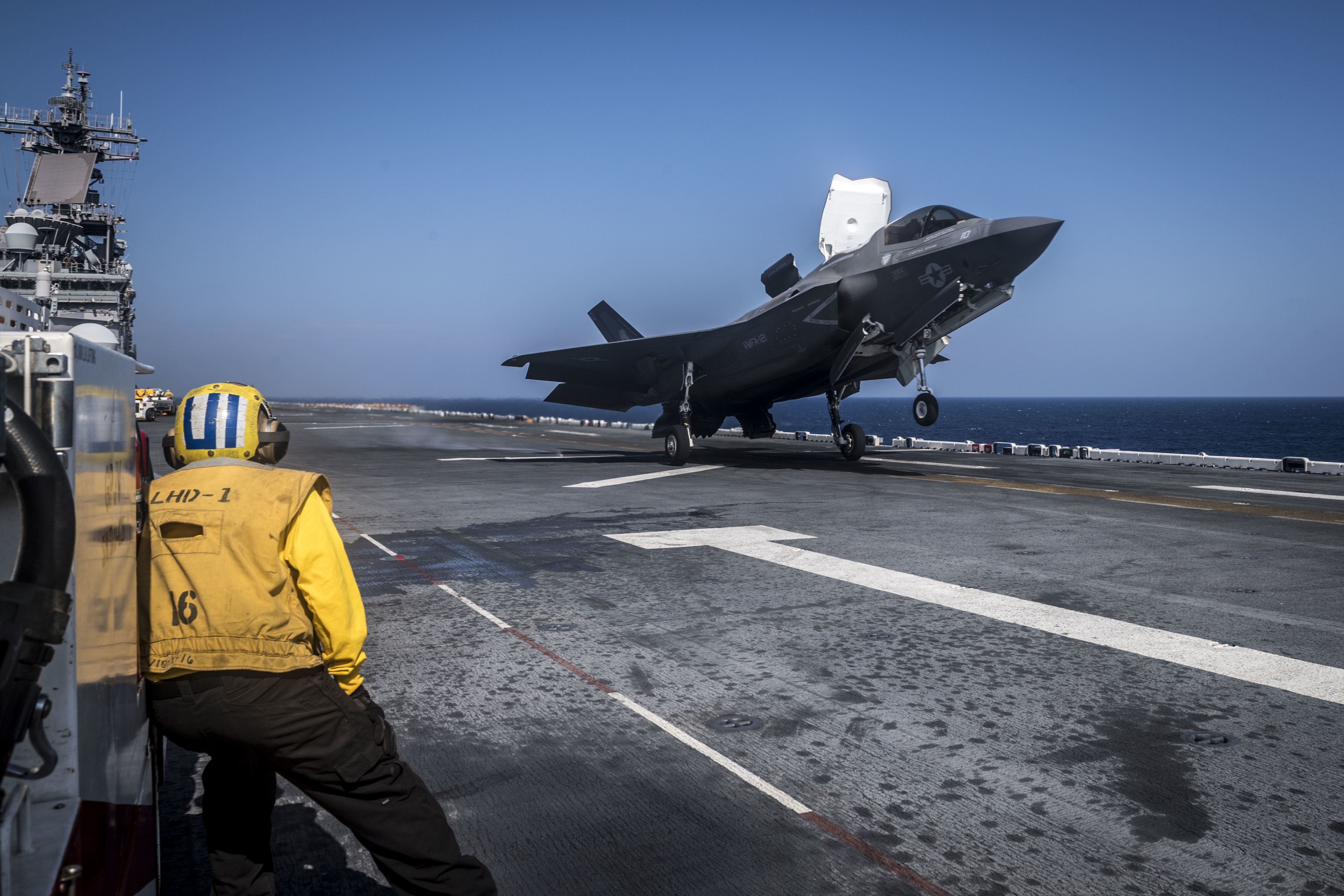 An F-35B Lightning II aircraft attached to the F-35B detachment of the “Flying Tigers” of Marine Medium Tiltrotor Squadron (VMM) 262 (Reinforced) takes off from the flight deck of the amphibious assault ship USS Wasp (LHD 1) during flight operations on Feb. 3, 2019, in the Philippine Sea. US Navy photo.

With Wasp, “we’re going with two less assault support aircraft. The America-class ship is a bigger flight deck, it will facilitate the full 12, complement of 12 Ospreys and four [CH-53E heavy-lift helicopters], so I’m comfortable with where the lift is going to be for the ground combat element without that well deck but those aircraft to complement it.”

Though that change will necessitate revisiting operational plans, the additional Ospreys will be important to support F-35B operations: the Osprey will be the primary mover of spare F-35 engines to and from ships, being the only aircraft with both the carrying capacity and the range to support this mission in many cases.

Though the additional Ospreys in lieu of LCACs and LCUs will work well for 31st MEU, it may prove a little more challenging for a MEU operating aboard fellow America-class ship Tripoli (LHA-7), which will commission later this year. If a U.S.-based MEU wanted to bring its tanks, it would have to load them all onto the smaller amphibious transport dock rather than the amphibious assault ship, since the tanks have to be transported ashore via surface connector.