ARLINGTON, Virginia – The F-35B Joint Strike Fighter is not only changing the way Marine forces conduct their missions, it is also changing the way the amphibious navy can do its work in the absence of an aircraft carrier, leaders from the 13th Marine Expeditionary Unit and Essex Amphibious Ready Group said.

The Essex ARG and 13th MEU were the first to deploy from the United States with the F-35B, and they operated in the Pacific and Middle East from mid-July until their March 1 return home to San Diego. The deployment not only generated lessons learned on how to operate and sustain the F-35B jets as part of the Marine unit and in support of its objectives ashore, but also how to use the new jet to support blue-water Navy missions at sea, 13th MEU Commanding Officer Col. Chandler Nelms and Amphibious Squadron 1 Operations Officer Lt. Cmdr. David Mahoney told the Potomac Institute for Policy Studies on April 12.

“We’re definitely changing the way amphibs are employed, especially on the blue side – we’re no longer just the trucks that carry Marines that we used to be,” Mahoney said. “There was no carrier in 5th Fleet, for example, so a lot of the CSG-like duties we started taking over just because we had to.” 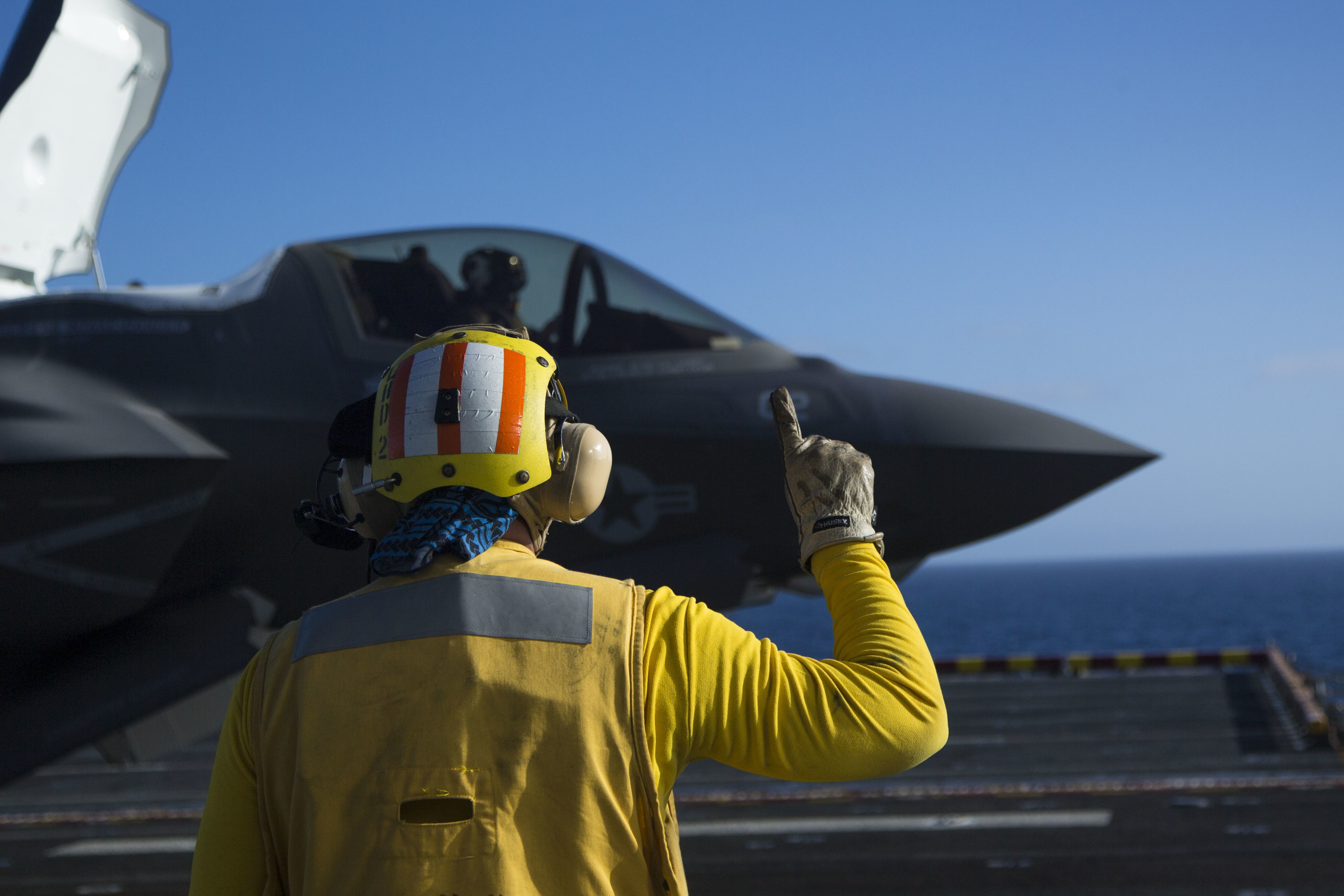 Though Mahoney made clear the ARG/MEU team could never replace a carrier air wing, he said “the ARG is now becoming almost like a mini CSG, where as part of the warfare concept we were executing many of those duties that would normally reserve to a CVN. There was no CVN except for the last couple of weeks while we were in theater (in 5th Fleet), so we were doing that traditional role on USS Essex (LHD-2) and working with other ships too. The ARG/MEU team is definitely in high demand to fill those roles as the Navy is spreading out further and further around the globe,” he said, noting that the deployed aircraft carrier, USS Harry S. Truman (CVN-75) was at the time focused on operations in Europe and north of the Arctic Circle rather than deploying to the Middle East as many had expected it would.

“We are being treated as a CSG in a lot of respects: you can see that layered defense, so we were always bringing in destroyers to help work with us – East and West Coast, wherever they came from, they were integrating with the team,” the operations officer continued.
“It’s not just the two or three amphibs that we had; we were bringing in destroyers, we worked with Europeans and their ships – this is what has to happen as the carriers are being sometimes sent elsewhere because the needs are rising elsewhere.” 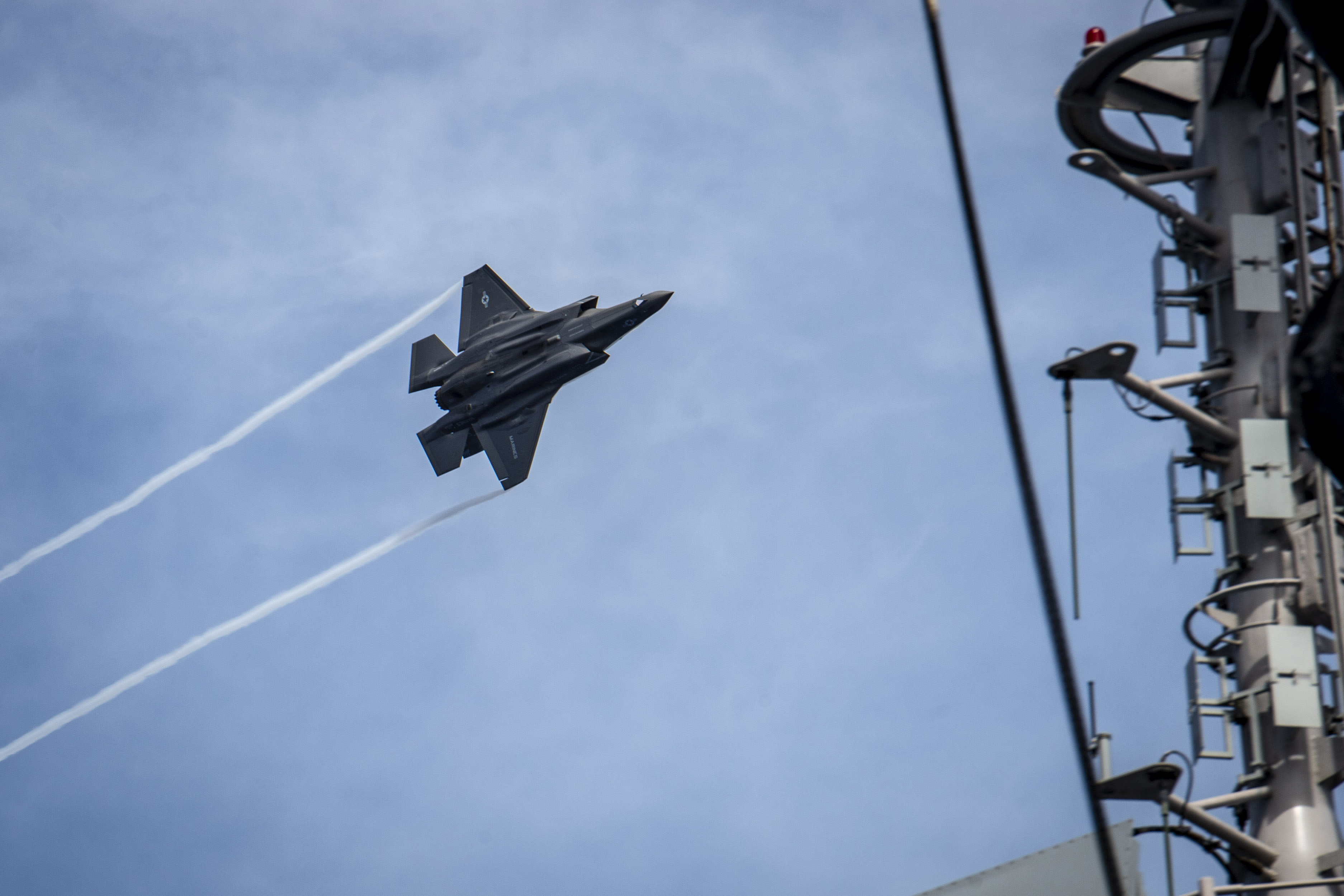 Amphibious assault ship Essex, dock landing ship USS Rushmore (LSD-47) and sometimes amphibious transport dock USS Anchorage (LPD-23) – which was for a while operating on its own in the Mediterranean Sea – were able to coordinate with nearby destroyers and the F-35Bs of Marine Fighter Attack Squadron (VMFA) 211 to maintain air control and situational awareness in a way that an ARG/MEU couldn’t have done previously with the legacy AV-8B Harrier strike airplanes.

“The aircraft we had before was predominantly a close-air support weapon, so for any type of air threat we were relying either on the naval surface force ship or we were relying on purple (joint) air to provide that top cover for anti-air warfare,” Nelms said.
“We now have an all-mission-capable aircraft that’s also capable of stealth operations and has fantastic sensors at the disposal of the MEU commander when I’m doing ship-to-shore operations or ashore operations, but also at the disposal of the commodore as he seeks to maintain maritime and air superiority. So the difference is vast, we’re still working through how we tie all that in and affecting our [tactics, techniques and procedures]. What we do have to remember is we only have a small number (of jets), right, so … we have limitations on an amphibious ship that’s unlike a carrier. So we don’t have the number of aircraft and we don’t have the flight window of a carrier – we can’t do 24-hour operations, we don’t have 60 aircraft on the flight deck, we have a much smaller number. But when applied, when you want that capability, it’s there. And we can do very high-end things for limited durations in our tasking, whether it’s in the maritime environment or the littoral environment ship-to-shore.”

Mahoney said the Navy side is still figuring out what the presence of the F-35B means for blue-water missions, but the Essex ARG had a chance to start working on that ahead of the deployment during a Surface Warfare Advanced Tactical Training event. SWATTs for amphibious ships focus on all mission areas – including anti-surface warfare and anti-submarine warfare – and the Essex ARG was able to embark VMFA-211 for the training event to practice using those airplanes as part of “strictly blue training” in those mission sets, Mahoney said.

“This really gave us an opportunity to start flexing that option that the 35 brings in the maritime domain,” he said, calling the F-35B a “much more advanced fighter than we ever had with the Harrier. As we’re learning through what we can do, the sky’s really the limit as we learn the potential. We’ve just got to keep coming up with new ideas on how to employ this aircraft because it’s a significant improvement on what we used to have.”

Though the Navy still has much left to learn, Mahoney said he’s sure the presence of the F-35B in an ARG/MEU will change the way the group is tasked by fleet commanders going forward.

“It definitely starts changing the thinking status. A lot of times amphibs are the guys who just haul Marines, kick them out, and if they need help they need to bring in some other offensive or defensive capability; whereas this is one of the first times we can really have that option to just reach out and touch somebody, whether that’s supporting the colonel and the Marines ashore or as we fight to get into the fight if that’s ever called upon – the F-35 gives us that option to get there because we may not have control of the seas and that’s definitely an option, “Mahoney said.
“We’re not a carrier air wing, of course, but who knows where the carrier’s going to be, and this definitely gives us a much stronger option than we had in the past. We’ve already started changing the mindset of how we employ an ARG, and an LHD specifically, because the 35 gives us a lot more options than we had.” 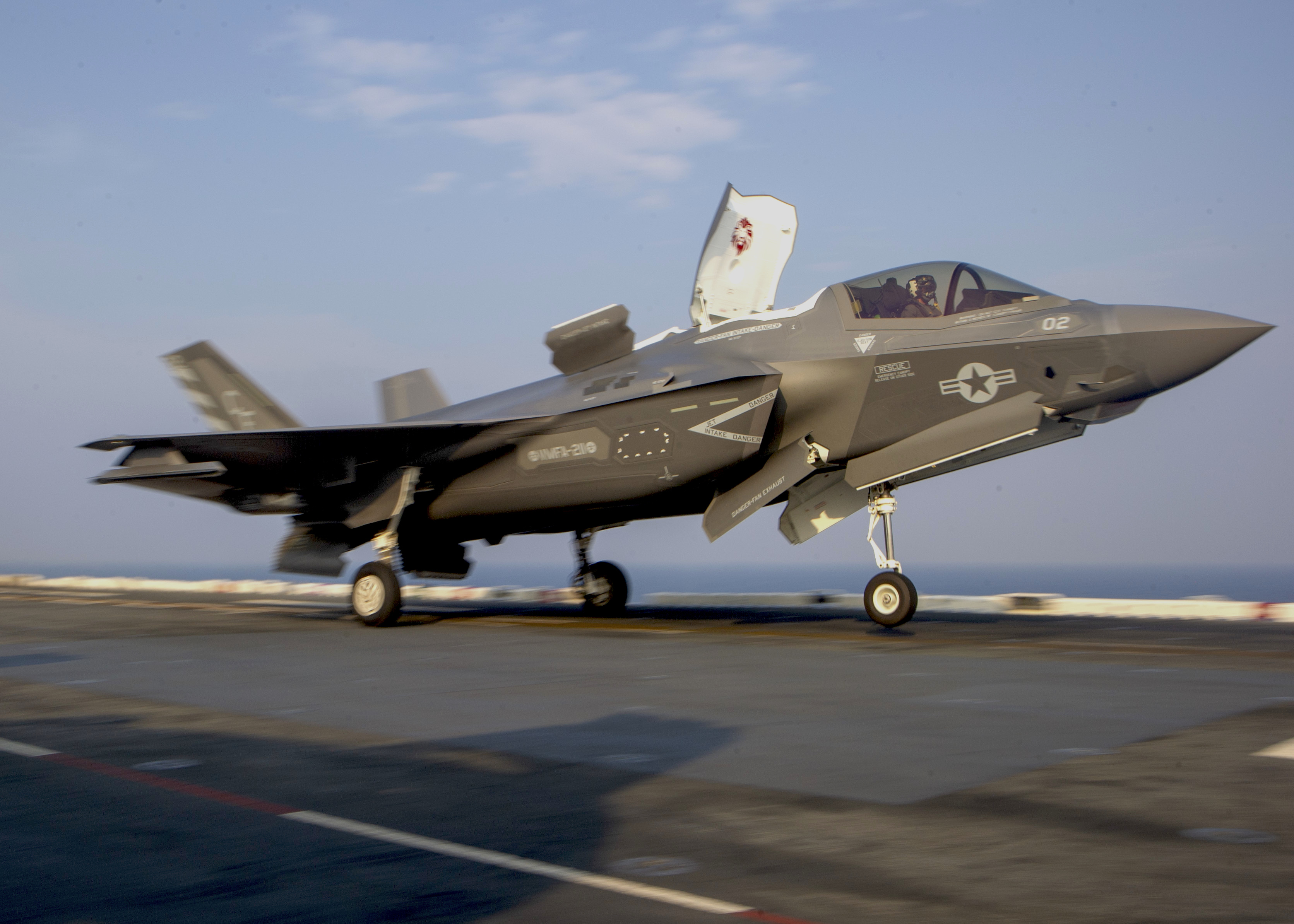 Nelms and Mahoney said the deployment was notable for many other reasons. The deployment was extended by a month, keeping the sailors and Marines out for 234 days. They had a packed schedule on the transit through the Pacific, working with many partners big and small. The ARG/MEU parked in the Arabian Sea for two weeks to conduct strikes in Afghanistan – the first-ever combat strikes by the F-35 – and then spent more than 50 days flying more than 100 combat sorties over Syria, for a total of more than 1,200 combat hours in support of Operation Inherent Resolve alone. Anchorage sailed as far as Rota, Spain – an unusual location for a West Coast ship to end up, Nelms and Mahoney said. Both the Navy and Marines brought 3D printers to begin learning lessons about printing small plastic parts at sea, as a first step forwards eventually being able to print more complex metal parts. And the aircraft maintained an average readiness rate of 70 percent, with the F-35Bs maintaining a 75-percent readiness rate.