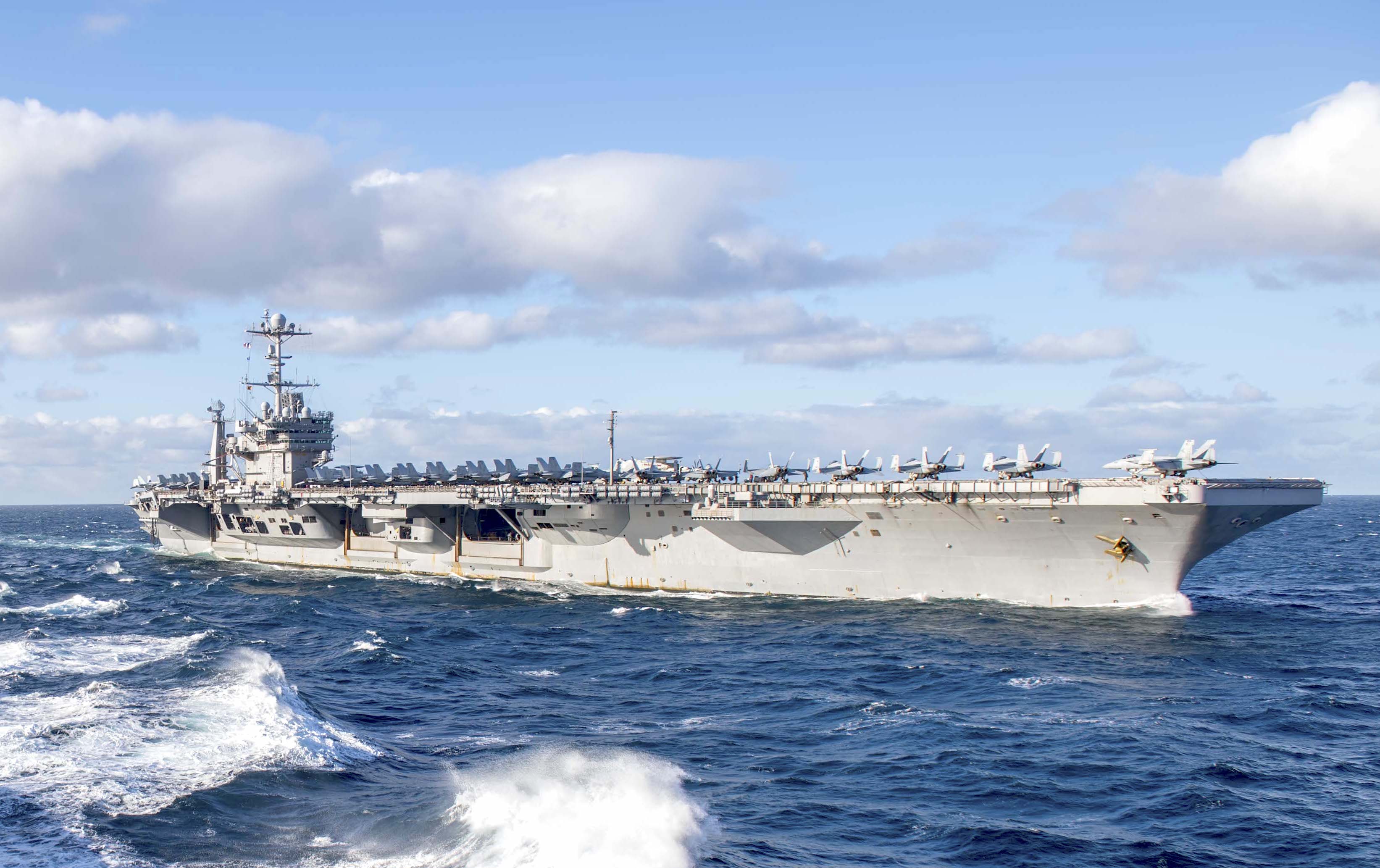 This post has been updated to include comments from a second March 26 hearing, which took place in the HASC seapower and projection forces subcommittee.

The Defense Department’s first crack at convincing the House Armed Services Committee to retire an aircraft carrier early to support the development of future weapons systems and unmanned platforms was not well received.

Acting Secretary of Defense Patrick Shanahan and Chairman of the Joint Chiefs of Staff Marine Corps Gen. Joseph Dunford reiterated their pitch for not refueling USS Harry S. Truman (CVN-75) – it will fund the development of future capabilities, it will boost employment for industry when combined with an investment in two new Ford-class aircraft carriers, and it is reversible if an upcoming Navy Force Structure Assessment concludes the service needs more aircraft carriers.

First, Rep. Rob Wittman (R-Va.), the former chairman and current ranking member of the seapower subcommittee, questioned the decision during his time in the full committee hearing.

Shanahan told him, “I think it’s a strategic choice we need to make. This was a difficult choice; we spent a year making this decision. And under no certain terms, aircraft carriers are vital now and vital into the future. The Truman decision was made in concert with the two-carrier buy. We looked at how to increase lethality – there isn’t a drawdown of capacity until the mid-2020s, so it’s not like this is an irreversible decision, but we took the savings to invest in the future force

“And all of this was very mindful of the industrial base,” Shanahan continued.
“The other consideration here was how do we invest in the supply chain, and there was actually growth in employment. We can change these decisions, but I think as the Navy updates its 355-ship strategy and looks at its force structure … let’s see what they come back with.”

Still, Wittman focused on the current and near-term ability for the Navy to meet combatant commanders’ needs for aircraft carriers abroad. The Navy had previously pushed to be able to provide two carriers constantly on station – typically one in the Middle East and one in the Pacific – with three more able to surge forward if needed. In the past year or so, the Navy has backed away from that type of commitment and is instead focused on its Dynamic Force Employment model that stresses flexibility and agility of the force rather than its ability to predictably stay present in the Middle East, for example. Though the Navy’s goal is to have 12 aircraft carriers and it is legally obligated to maintain a fleet of at least 11, retiring Truman would lead to the service having just nine aircraft carriers for several years, according to the recent long-range shipbuilding plan released last week.

“Does nine allow us to generate two continuously on station and three in surge?” Wittman asked.

“It would be difficult to do that,” Dunford replied.

Wittman pointed out the Navy’s inability to meet combatant commanders’ requirements for aircraft carriers, which he said provide the service an ability to project strength and power around the globe.

Dunford stressed that the Truman decision could be reversed, but he noted why the Pentagon would rather invest money in new technologies instead of refueling a 25-year-old ship.

“An important assumption is that the money that was saved by not refueling the Truman would be used to develop new ways of conducting maritime strike. So when we look at the carrier, we’re looking at it from a maritime strike capability. And a more diverse way of providing maritime strike is among the initiatives inside the department.”

If it became clear that those systems’ development were delayed, or that they could not provide the warfighting capability the Pentagon expects, Dunford said, “then we’ll have to go back to the secretary and have a conversation about the reversibility of the decision, because new programs combined with the programs of record today won’t meet our aggregate maritime strike capability by the mid-20s.”

Wittman noted as his time expired that the Navy is still in very early testing with unmanned systems such as the Sea Hunter unmanned surface vehicle experimental effort.

“I’m all for those unmanned systems, but it’s a big leap where we’re only with Sea Hunter in its initial trials, saying we’re going to completely replace that carrier that has that presence without having a bridge to those (future) systems,” the congressman said.

Seapower and projection forces subcommittee chairman Rep. Joe Courtney (D-Conn.) was called on next at the hearing and slammed the decision to risk throwing off the Truman refueling effort – planning and advance procurement for which have to take place on a certain schedule – to save a small sum of money in Fiscal Year 2020 alone.

“It just seems to me really premature for the Department to come forward with a decommissioning or mothballing of the Truman when we still don’t even really know what the revised Force Structure Assessment looks like,” Courtney said.
“We’ve already got about $500 million in sunk costs for the reactors, which according to the Navy are going to be, quote, put on a shelf. … So the savings that you’re projecting in the 2020 budget itself, it’s $17 million for this year. … We’re dealing with a decision that’s premature in terms of the sequence of the Navy’s updated Force Structure Assessment, we have $500 million in sunk costs that are already out the door, and we’re going to save $17 million with this request in the 2020 budget. Again, that really doesn’t add up to a very good business case in terms of the very tough decision that we’re going to have to make.”

Courtney concluded by saying the proposal from the Pentagon “is just going to be a very tough sell over at the seapower committee.”

When the subcommittee hearing began a few hours later, Wittman resumed his line of questioning with Navy leadership. Noting the nine-carrier force laid out in the shipbuilding plan, he said the decision to retire Truman early “seems to be running counter to what our combatant commanders say, what the force structure assessment says we need. With the lethality and capability that platform provides to us, why would then we retire Truman 25 years early in relation to the demands we see around us and with our adversaries building carriers at a brisk pace?”

Navy acquisition chief James Geurts responded that the money saved in FY 2020 wasn’t significant but that “it does impact the out-year budgets, where we’re looking to transform the Navy and integrate some of the newer capabilities into the Navy of the future.”

Vice Adm. Bill Merz, deputy chief of naval operations for warfare systems (OPNAV N9), conceded that “the Truman decision was not a warfighting decision, it was more of an investment decision. We know, the signals are clear, we have to move on to alternate investments, distributed lethality, cost-imposing measures” such as unmanned systems, long-range weapons and enablers such as command and control and logistics for distributed forces.

Merz added that the Navy could have waited another year to refine its vision of what unmanned platforms and other new systems it needed before changing its spending patterns, but he said the service needed to start moving in the right direction even if the specifics weren’t hashed out yet.

“The way we have structured this, the investments we are going after, we will continue to study it, we will continue to experiment with it. We elected to make this bold decision early – every year counts; we could have waited, we decided we didn’t want to lose that year to figure out which direction we want to go with these alternate investments. So this is about distributed lethality to complement the force, not to replace the force,” Merz said.

Still, despite the Navy’s testimony, HASC seapower members were not all convinced. Rep. Elaine Luria (D-Va.), a retired Navy commander and surface warfare officer whose district includes Naval Station Norfolk, reminded the Navy leaders that congressional mandates to maintain at least 11 aircraft carriers and 10 air wings in the mid-2020s remain in place, and she added that any budget request should start with those mandates as a minimum.

“It seems as though you’re coming to Congress and this could be some sort of shell game where you request to not fund the Truman but you’re looking for unmanned surface vessels,” she said.
“I don’t think the president’s going to turn to the secretary of defense and say, ‘where are my unmanned surface vessels’ when a conflict breaks out in the world; they’re going to turn and ask, ‘where are my aircraft carriers?’”