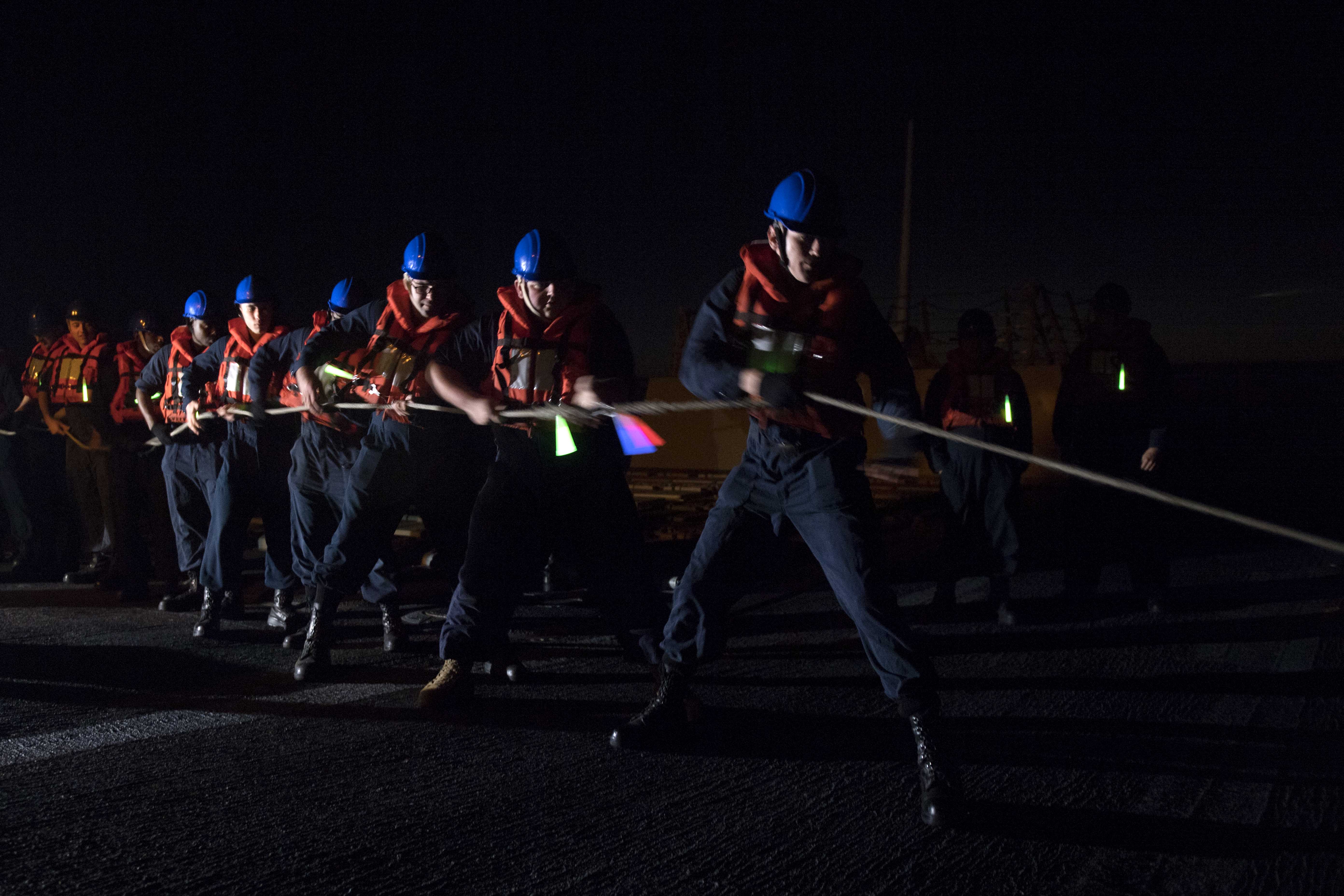 This post has been updated to include an additional statement from U.S. Pacific Fleet.

CAPITOL HILL – The Navy’s Pacific and Atlantic fleet commanders have increased their ability to understand surface ship readiness at the individual ship level and have shown their willingness to cancel or delay deployments if a ship has not proven it can safely conduct that mission, the two fleet commanders told lawmakers today.

U.S. Fleet Forces Command commander Adm. Christopher Grady and U.S. Pacific Fleet commander Adm. John Aquilino told the House Armed Services readiness and seapower and projection forces subcommittees today that they are being forced to take some risk in the maintenance phase due to not having enough sailors to fill all at-sea billets, but they are remaining firm that ships will not deploy without the right personnel onboard and the right training and material readiness proven during training and certification events.

“I can tell you that we in the Atlantic Fleet – and I think I speak for all the fleet commanders – we do not ask a ship or direct a ship to go on mission if they are not certified to do the job. I have made sure that that is the case, and indeed there have been several occasions where I have said, that ship is not ready, we’ll need more time,” Grady said early in the hearing.
“We know what the requirement is, and if they’re not ready, they’re not going.”

The two admirals faced questions about these practices because, after fatal collisions involving USS Fitzgerald (DDG-62) in June 2017 and USS John S. McCain (DDG-56) in August 2017, it became apparent that many of the Forward Deployed Naval Force Japan ships operating in U.S. 7th Fleet had been conducting missions with many – or in the case of Fitzgerald, all – of their warfare certifications expired. In a September 2017 hearing, the late Sen. John McCain said “the McCain had expired training certifications in six out of the 10 key warfare mission areas. The Fitzgerald had expired certifications in all 10 mission areas.” In that same hearing, Chief of Naval Operations Adm. John Richardson admitted that lapsed certifications were “pervasive” in 7th Fleet.

Aquilino, who took command of PACFLEET in May 2018, said at today’s hearing that, while previous leadership in the region waived the certifications to keep up with heavy operational demands from the combatant commander, “there are no more waivers unless granted by me, so any waiver or request to operate in a manner that doesn’t meet the identified standards are my decision alone. … To date, I have granted no waivers.”

Both Aquilino and Grady walked the subcommittees through their process of understanding readiness in their fleets, including their decision process when they’ve determined a ship isn’t ready for the tasking it was assigned. Readiness standards were determined and codified by Fleet Forces, in conjunction with PACFLEET, and then each fleet commander is responsible for adhering to those readiness standards as they generate deployable forces in their parts of the world. 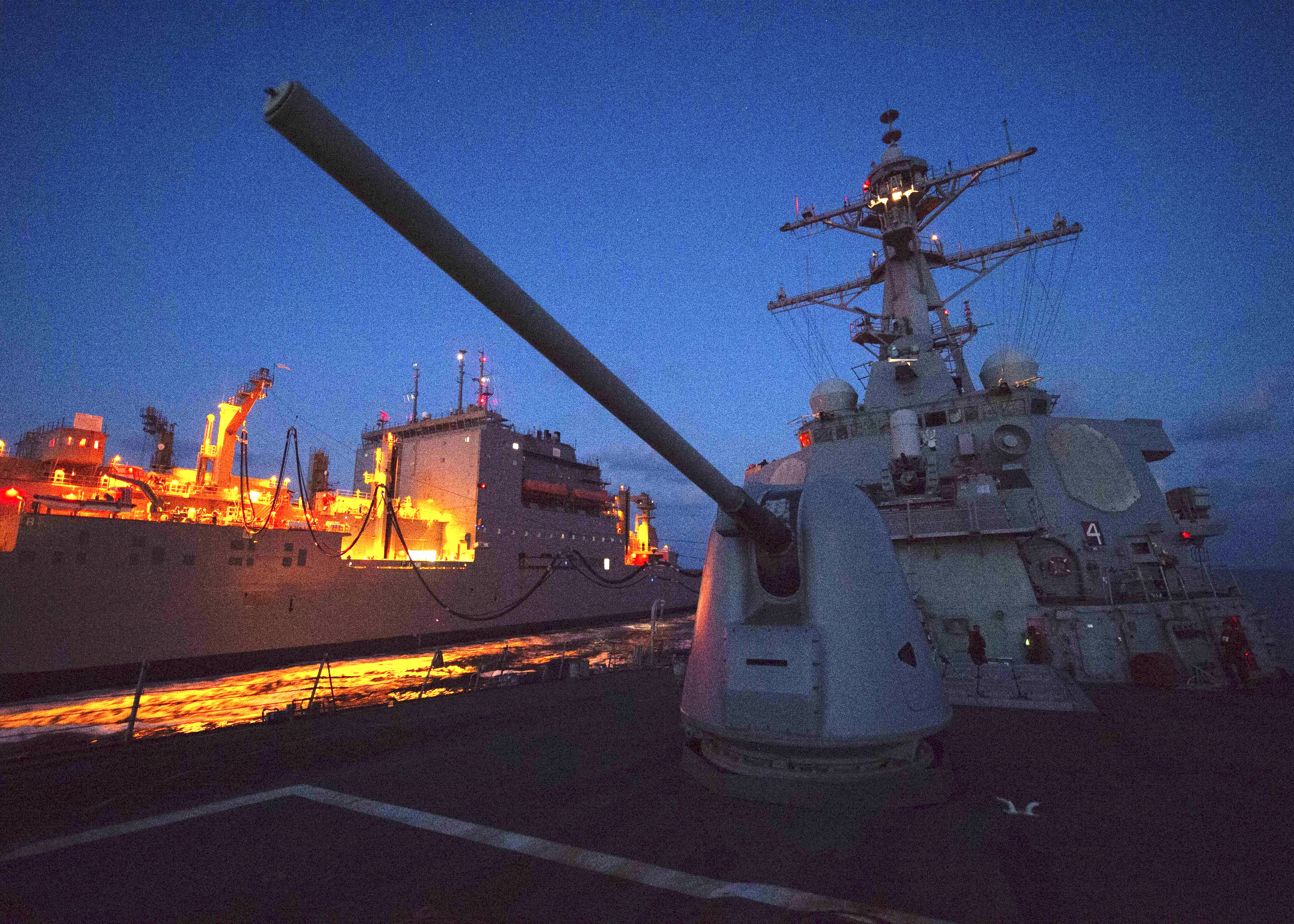 USS Arleigh Burke (DDG-51) transits alongside the Lewis and Clark-class dry cargo and ammunition ship USNS Medgar Evers (T-AKE-13) during a replenishment-at-sea in the Mediterranean Sea on Nov. 12, 2018. US Navy Photo

“As part of my normal operations each day and week, I am briefed three days a week on the exact readiness of the force that’s deployed. And if there are manning issues, training issues or equipment issues on that need to be fixed,” then those problems are either addressed immediately or the ship is not allowed to conduct the mission for which it is deemed to be not ready, Aquilino said during the hearing.
“Once a week I talk to every one of my commanders, we talk about the longer-term view of the readiness of the force as well as upcoming deployers to make sure they’re on track. And then once a week in an additional meeting I talk about those ships in maintenance to make sure that the ones getting ready to go in and the ones that are in are progressing as we need them to progress.

“Now if any of those indications show me that I have a problem coming up, or one immediately identified that we were not aware of, I have a voice to the combatant commander, and when I determine that ship is either not manned/trained/equipped, not safe, uncertified, number one I would terminate their ops, and then have that conversation with the combatant commander,” Aquilino continued.

Grady said he had a similar process in the Atlantic fleet, and added that he also gauges readiness through various new reporting requirements.

“We take a look at each ship in every strike group before they transition [from the basic phase of pre-deployment training to integrated phase and then to the advanced phase] to make sure that they are ready to do that,” Grady explained.
“And back down to the CO (commanding officer) level, one of the things that I think will go a long way to codifying and institutionalizing that beyond [Aquilino and Grady] is the requirement for COs to issue a 90-day letter to their type commander after they take command. This is a direct feedback to their type commander on the condition of their ship, the man, the train, the equip, all the way across all the pillars of readiness, and that has been a very powerful voice for the commanding officer.”

Grady said that adding in new “touch points” with lower-level commanders increased his awareness of fleet readiness, and in turn increased trust between the fleet commanders and the combatant commanders so that when Grady or Aquilino say they cannot deploy a ship, the COCOM trusts that that’s in the Navy’s best interest.

Grady told the subcommittees he had one instance where a ship wasn’t ready, and “in my case it was either replace it with another one that was ready or they’re going to come three weeks late because I need to finish the training.” Without elaborating on the ship or the mission, he said he postponed the deployment by three weeks and considered it “a great success” in ensuring readiness.

Aquilino said he too had pushed back against U.S. Indo-Pacific Command requirements when the Navy fleet was not ready to support the missions it was assigned. 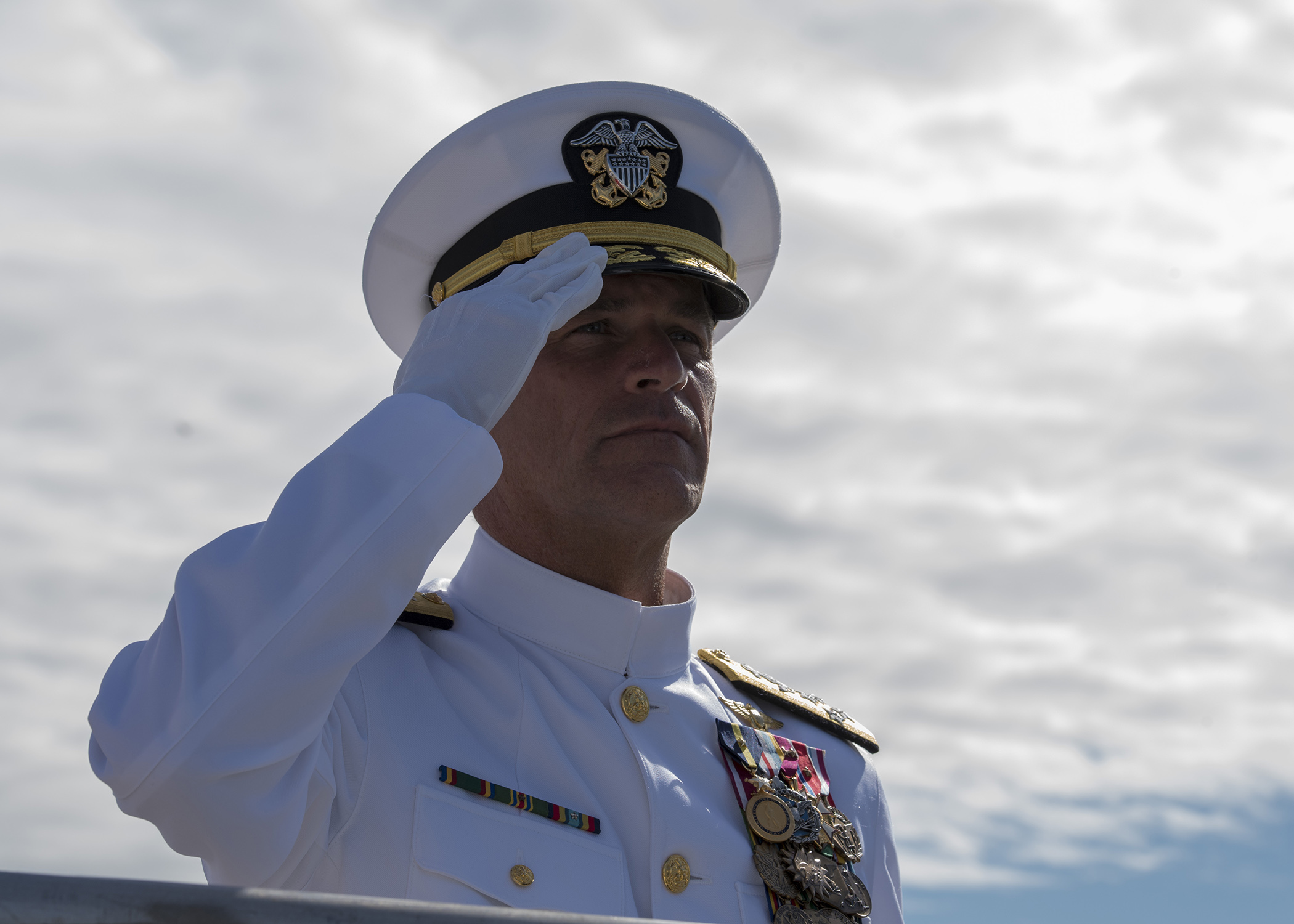 “I also have terminated two deployments for units that were not assessed to have the appropriate level of training to deploy and execute their missions. Additionally, I took an entire strike group – again, with the approval of [INDOPACOM Commander Adm. Phil] Davidson, the combatant commander, because we meet his responsibilities – we have reduced their requirement to remain ready longer in order to free up manning concerns and posture those forces to be able to be ready for the next cycle of employment, give them the rest of the time they need to ensure that they’re ready,” Aquilino said.

Asked later for more specifics, he added that one of the canceled deployments was a surface ship headed to the Rim of the Pacific 2018 exercise, and the other was a ship headed to support the Oceania Maritime Security Initiative deployment that helps small island nations combat maritime crime and enforce fisheries laws in conjunction with U.S. Coast Guard law enforcement detachments (LEDETs). The carrier strike group’s “surge phase” within the Optimized Fleet Response Plan (OFRP) was cut short to free up personnel and resources, which meant “we took risk with regard to surge forces that, if crisis were to have broken out, they would have needed additional training before they could have gone, that’s the risk.”

Following the hearing, PACFLEET spokesman Lt. Cmdr. Tim Gorman told USNI News that “in 2018, underway tasking for USS Momsen (DDG 92) and USS John P. Murtha (LPD 26) were cancelled by Adm. Aquilino, after consultation with and concurrence of U.S. Pacific Command, because he was not satisfied that either met the standard of readiness required to complete the tasking effectively and safely. Momsen was originally scheduled for a routine Oceania Maritime Security Initiative (OMSI) patrol, and John P. Murtha was scheduled to participate in the Rim of the Pacific exercise.”

Aquilino praised Davidson’s handling of over-subscription of the surface forces in the Pacific region, noting that Davidson also removed a tasking from Aquilino’s plate in an effort to ease the burden on the surface force – though if the threat were to grow that tasking would be resumed, Aquilino said.

“By him reducing some of the operational demands in the Pacific, to me that’s a pretty strong example of someone who understood the concerns when the report was written and doing his part to ensure that it doesn’t happen again as well,” Aquilino said, referencing that Davidson oversaw the Navy’s Comprehensive Review of Surface Force Incidents and its many readiness-related recommendations in his previous job as Fleet Forces commander from 2014 through 2018.

Aquilino and Grady also said during the hearing that a new Ready for Sea assessment had been stood up to ensure that, even if ships are taking risk by not being properly manned during the maintenance phase of OFRP, the fleet commander knows how many personnel are on a ship before it leaves the pier for basic phase training and what risk is presented by any empty billets. The fleets have also created a minimum training requirements matrix so that, if a ship was to be tasked with a mission in the midst of its pre-deployment workup period – a scenario most likely in 7th Fleet – the Navy has a way of tracking what that ship is manned and trained to do and therefore which missions it could accept or which the ship would have to say no to.

“That’s new, and that’s an important addition to our surface force readiness manual and how we think about the minimum training requirements for the ship,” Grady said.