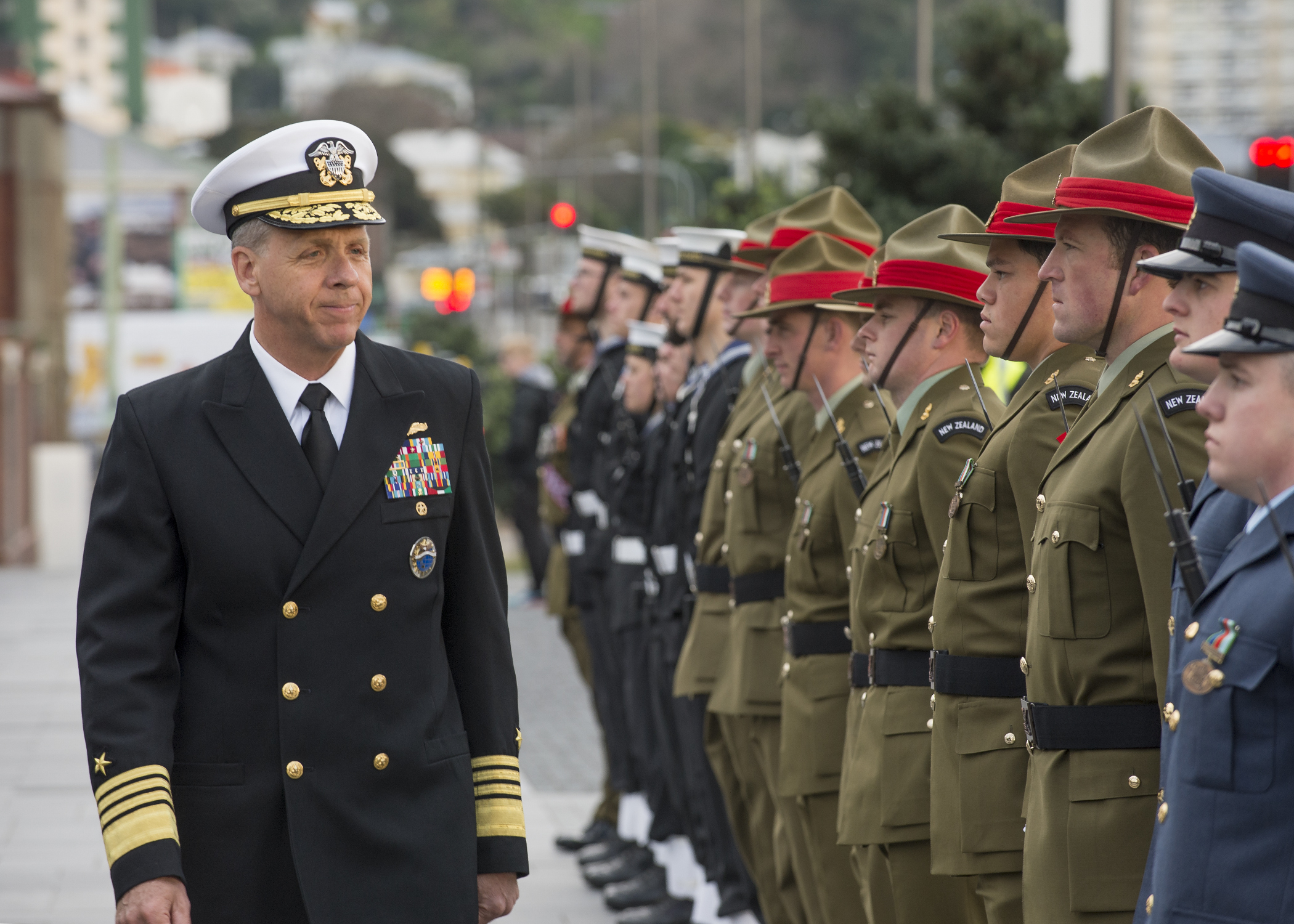 Adm. Phil Davidson participates in an honors ceremony at the Pukeahu National War Memorial Park in New Zealand in August 2018. US Navy Photo

The head of U.S. Indo-Pacific Command is defending the Navy’s effort to reform its surface fleet after a tense exchange with a senator in a posture hearing earlier this month.

“I am satisfied by the progress the Navy has made on the recommendations. I will be watching the 2020 budget progress closely, as there are important investments, specifically in training facilities, that I would like to see in this year’s budget. I look forward to your support of this effort,” Davidson wrote.
“We are also seeing progress with the units operationally assigned to U.S. Indo-Pacific Command. I have reduced some mission requirements for U.S. Pacific Fleet to ensure the remediation of ship maintenance and training shortfalls for our Forward Deployed Naval Forces in Japan. I am tracking the efforts by U.S. Pacific Fleet leadership to bring wholeness back to Seventh Fleet units for this critical part of the world.”

Davidson, who at the time of the two collisions served as commander of U.S. Fleet Forces Command, led one of two reviews into the systemic causes of the collisions that generated 111 recommendations for the Navy to improve surface training, manning and maintenance to lower the chances of avoidable collisions in the future. Of the recommendations, 92 have been started, and longer-term goals are “on track,” he wrote in the letter obtained by USNI News.

However, aside from the status of the recommendations, he did not elaborate on specific numbers in terms of ship readiness or how the U.S. Pacific Fleet is keeping up with staffing surface ship with right number of sailors with the right specialties they need to operate – so-called fit/fill metrics.

On Feb. 12, King told Davidson during an INDO-PACOM posture hearing before the Senate Armed Service Committee that he was dissatisfied with the information provided to senators and committee staff.

“I want real numbers. I don’t want general ‘We’re working on staffing’ or ‘We’re working on more training,’ because these were avoidable tragedies. I would like to see specific responses from the Navy. Not promises and not good feelings,” he said.

Those numbers were not provided in the letter Davidson sent as a follow-up.

A spokesman for King told USNI News staff members were still reviewing the letter and did not have a comment as of Monday afternoon. King also visited the Pentagon last week to receive an updated briefing from senior Navy leaders on the progress of the reforms, two defense officials familiar with the visit told USNI News on Monday.

The letter from Davidson followed an exchange at the same hearing in which King asked the admiral if he had read a ProPublica report that outlined years of institutional neglect in the surface force that led up to the two fatal collisions.

“These two collisions were tragedies, there’s no doubt. All the senior leadership of the Navy feel an immense accountability,” Davidson said at the hearing. “The fact of the matter is 280-odd ships weren’t having collisions.”

“Airplanes are landing all over America, and just because they aren’t crashing doesn’t mean they don’t need high-level maintenance. To tell me that isn’t very convincing,” King responded.

The letter comes ahead of a planned year-one report from the Readiness Reform and Oversight Council (RROC) led by Under Secretary of the Navy Thomas Modly and the Vice Chief of Naval Operations Adm. Bill Moran. Additionally, the heads of U.S. Pacific Fleet and U.S. Fleet Forces Command are scheduled to testify Tuesday morning before the House Armed Services seapower and projection forces subcommittee on the status of surface navy reforms at the fleet level.

The following is the complete text of the Feb. 21 letter to King.

I write this letter to respond to your request for information during the Senate Armed Service Committee posture hearing for U.S. Indo-Pacific Command and U.S. Forces Korea on 12 February, 2019, and provide additional information on the steps the Navy has taken to improve our approach to readiness, especially Surface Force readiness, following the collisions in the Western Pacific in 2017. I am grateful both for your interest in this matter and for the consistent support of the Senate Armed Service Committee as we execute the improvement plan. As Navy leadership has made clear, these were avoidable tragedies. We will never forget those who were lost. We best honor these fallen Sailors by maintaining a clear focus on the mission to improve the performance of all our ships.

Following the collisions, the Vice Chief of Naval Operations (VCNO) tasked me as Commander,
U.S. Fleet Forces Command to conduct a tactical and operational level Comprehensive Review (CR) of these incidents, and others, and to make recommendations for improvements. The focus areas specified by the VCNO included: individual training; unit level training and operational performance; certification of operational and mission standards; operational employment and risk management; material readiness; and the practical utility of current navigation equipment and combat systems.

Additionally, the Secretary of the Navy conducted a separate and independent Strategic Readiness Review (SRR). The SRR focused beyond the parameters given in the CR to more fully examine the systemic conditions that might exist in the Navy over the last 30 years.

For the CR, I compiled a diverse team of thirty-four subject matter experts from the ranks of E-5 to 0-10 with representatives from all military services and warfare communities, as well as civilian experts. I had six senior mentors that included retired flag and general officers from the Army, Navy, and U.S. Marine Corps. This mentorship team also included the President of the Maryland Pilots Association and an MIT senior professor.

The team traveled extensively throughout the Navy to include San Diego, Japan, Hawaii, Washington D.C., Norfolk, Newport, Great Lakes, Illinois and elsewhere. It included visits to fleet concentration areas, training commands, maintenance facilities, headquarters, and ships. We also conducted visits with industry, and included reviews of other investigations and lessons learned from both the Challenger and Columbia space shuttle incidents.

As a result of our analysis, the team produced a 170-page report with 58 recommendations focused on improving five areas: fundamentals, teamwork, operational safety, assessments, and culture across the Navy. The CR team determined that improvements for our people, in our technology and training, and in our processes – all of the areas in the VCNO’s tasking – were necessary. As a result, the Navy is making changes as an institution, from the individual and unit level on up through the type commanders, the fleet commanders, the Naval Sea Systems Command, and the senior levels of the Navy, to ensure we are developing a safer and more effective surface force.

The Readiness Reform and Oversight Council (RROC), which is co-chaired by the Under Secretary of the Navy and the VCNO, was established to implement the recommendations and reforms laid out in the SRR and CR, as well as the compiled recommendations from GAO and other reports. The RROC provides the continuity and authority to see reforms and recommendations through to effective completion, and makes periodic reports to the Secretary of the Navy, Chief of Naval Operations, and Congress. VCNO is about to release his first annual report on status of the reform efforts and progress made in each of the compiled recommendations.

Currently, out of the 117 total recommendations that were submitted, six were redundant and combined for 111 trackable actions. Of these, 91 (or 82%) are complete as of 4 February, 2018. The rest are longer-term .actions that are on track. VCNO has routinely met with staffers at their request and at least quarterly with interested media to remain transparent on progress and lessons learned. Additionally, on 26 February 2019, the Navy’s Pacific Fleet and US Fleet Forces Commanders are scheduled for a readiness hearing with the HASC to discuss how these recommendations have been implemented and the net effect they are having on training and readiness of their respective fleets.

As I stated in testimony, I am satisfied by the progress the Navy has made on the recommendations. I will be watching the 2020 budget progress closely, as there are important investments, specifically in training facilities, that I would like to see in this year’s budget. I look forward to your support of this effort.

We are also seeing progress with the units operationally assigned to U.S. Indo-Pacific Command. I have reduced some mission requirements for U.S. Pacific Fleet to ensure the remediation of ship maintenance and training shortfalls for our Forward Deployed Naval Forces in Japan. I am tracking the efforts by U.S. Pacific Fleet leadership to bring wholeness back to Seventh Fleet units for this critical part of the world.

While many of the recommended changes in the CR and SRR will take time to validate fully, the Navy is pursuing the improvements that will not only help prevent the conditions that caused the collisions in the Western Pacific, but will raise the level of performance for all ships in the surface force.

As the Navy incorporates the recommendations of the CR and SRR, our Sailors continue to be deployed around the world conducting important and dangerous missions in defense of our nation and our interests. I thank you for your continued support and service on the Senate Armed Services.