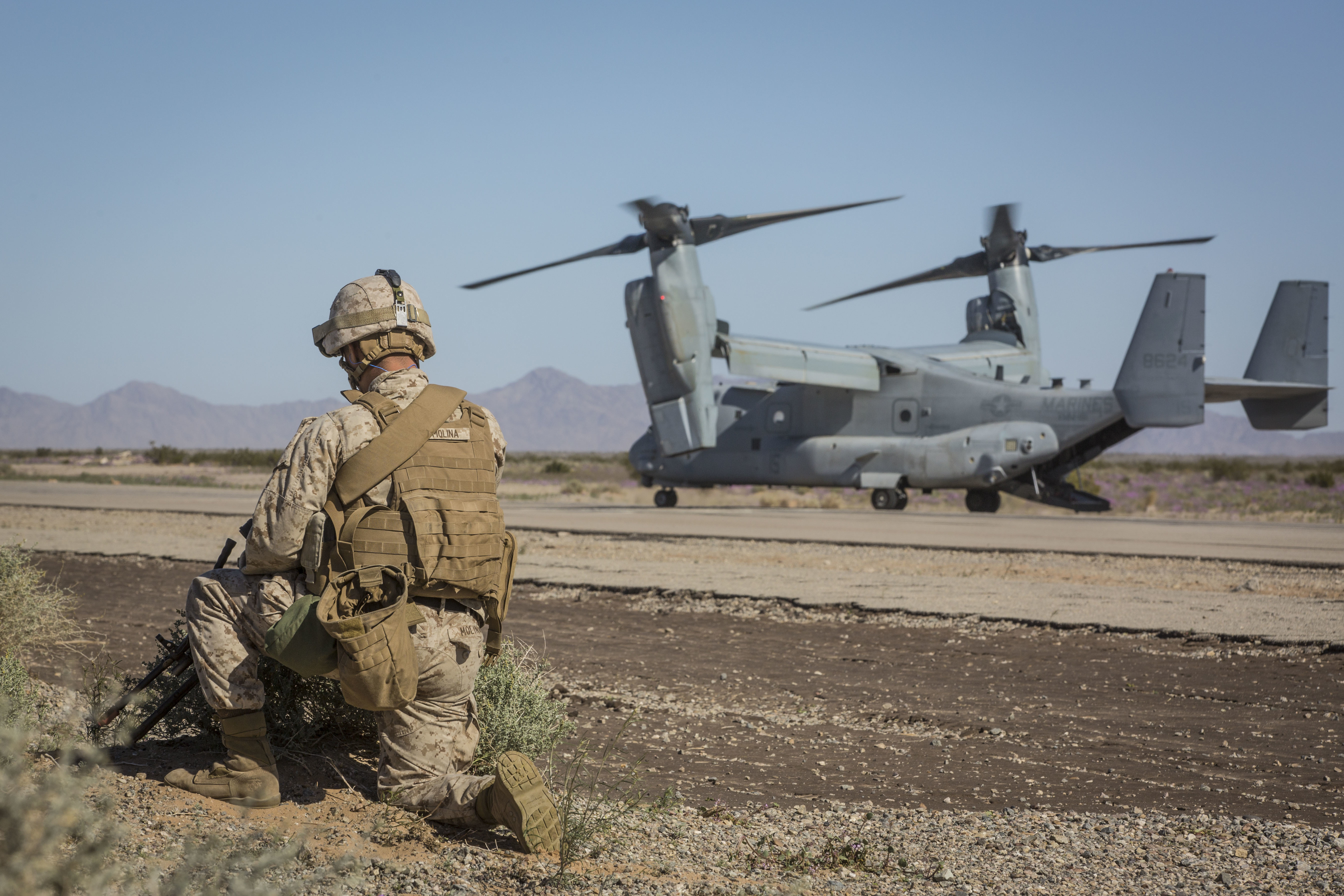 SAN DIEGO, Calif. – Technology and weapons upgrades to the MV-22 Osprey tiltrotor will give Marines a better edge in the networked battlespace, a combat pilot said last week.

“The Osprey’s mission revolves around one thing… the Marine on the ground. The purpose of the Osprey is to deliver troops, supplies and their equipment to an austere landing zone so they can conduct their mission,” said Capt. Mike “Drago” Miersma, who briefed the MV-22 capabilities at the WEST 2019 conference hosted by the U.S. Naval Institute and AFCEA.

“The success of the Osprey relies on industry and the military working together to make this aircraft better and to make it an essential part” of the Marine air-ground task force, added Miersma, who serves as the flight leadership standardization evaluator for 3rd Marine Aircraft Wing at Marine Corps Air Station Miramar in San Diego. 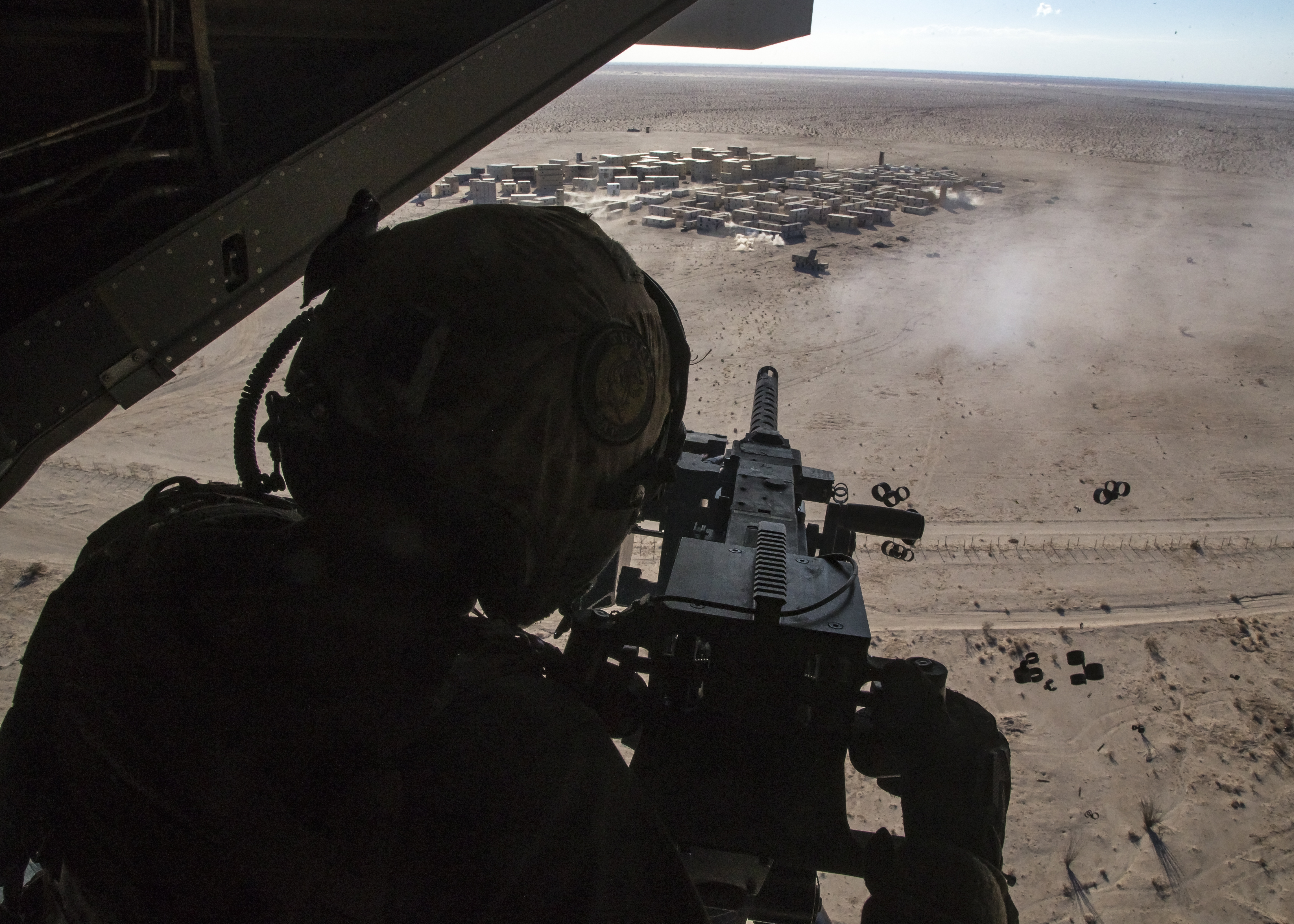 U.S. Marine Corps Cpl. Harrison Haymaker, a crew chief assigned to Marine Aviation Weapons and Tactics Squadron One (MAWTS-1), fires a GAU-21 .50-caliber machine gun out the back of an MV-22B Osprey aircraft during a tail gunnery certification in support of Weapons and Tactics Instructor (WTI) course in Yuma, Ariz., on Sept. 29, 2018. US Navy Photo

The Marine Corps has fielded about 90 percent of its planned 360-aircraft buy, and the MV-22 program is slated to reach Full Operational Capability in 2020. Last summer, Marine Medium Tiltrotor Squadron 262 stood up at Miramar. The final Osprey unit to stand up will be VMM-212 at MCAS New River, N.C., sometime this year, he said.

The Marine Corps’ Ospreys first saw combat in 2007 with VMM-263’s deployment to Iraq and since have continuously deployed. The aircraft continues to evolve, with ongoing updates and retrofits to replace obsolete tech, improve survivability and expand mission capabilities.

For example, the MV-22 Osprey often operates in areas with austere landing zones, with low-visibility requiring crews to rely on instrumentation to land. Existing flight control software enables an automated approach to “put the aircraft in a hover at 30 feet,” Miersma said. But “the one drawback… is it is slower than a pilot. The system cannot fly the aircraft as fast as a trained pilot can.”

In a hostile landing zone, “it’s extremely important,” noted Miersma, a veteran of three deployments. “The extended time in the landing environment is just more time we are exposed to hostile fire on the ground.”

Reducing that time in the LZ is critical. Last year, while flying with the Marine Corps’ test squadron, Miersma saw some flight-control software changes to improve the Osprey’s stability and increase speed approaching an LZ. He said the capability improvement “is the result of collaboration between us and industry, coming together to make this system more stable and easier to fly and teach.”

But even when the Osprey slows its speed when transitioning to land, it’s vulnerable to enemy fire, especially when without gunship escorts providing close-air support. On one deployment, Miersma flew an Osprey with a 7.62mm “mini-gun” affixed to the aircraft’s belly and operated by the crew chief. It was a modified version of BAE Systems’ Remote Guardian System, first installed on some V-22s a decade ago. Such guns would give the Osprey a forward-firing capability, in addition to any ramp-mounted machine gun.

The Marine Corps continues to weigh its options for expanded defensive capabilities. The mini-gun “adds weight to the aircraft and reduces the number of troops’ seats,” he said, and its unguided rounds are no match for the firepower from close-air support aircraft against enemy threats. 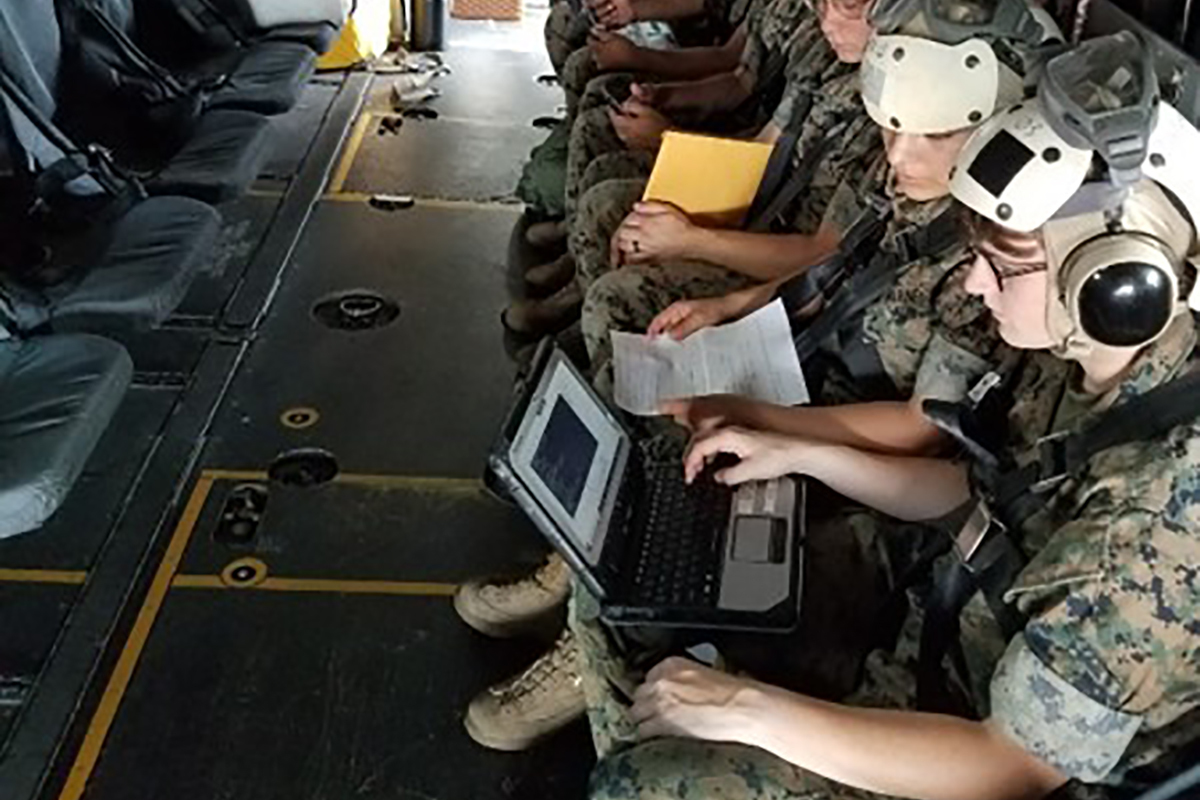 The MV-22’s ability to fly 900 miles with full, internal tanks – that’s three times the 200- to 300-mile range of helicopters – and its aerial refueling capability stretch the Osprey’s range and reach, “limited only by maintenance and crew day,” Miersma said. But long missions mean “longer amount of time that the grunts in the back sit back there, and they are devoid of information for what’s actually happening on the ground.”

“In some cases, the mission or the objective area or the whole point of them going there may have changed by the time we actually get to the objective area,” he added. Pilots often will update via radio or SATCOM, relaying information via the internal communications system to the platoon commander but not to each individual Marine in the back.

That might soon change. Some capabilities using high-power waveform enable a platoon “to move data from SATCOM into the back of the aircraft” using one of the Osprey’s two SATCOM antennas, Miersma said. With a standard military radio and SATCOM capability with the rear antenna, “we pull data down from a SATCOM network” using Adaptive Networking Wide-band Waveform (ANW2) and creating a small network that platoon Marines can use to distribute data using their MAGTABs, or Marine Air-Ground Tablets.

But slow data transfer rate and lower resolutions limit the information Marines can push or pull, he noted, and “as we are flying, somebody has to manually input that data into a system and transfer it, which would require heads-down time in the back of the aircraft to actually get that data uploaded and distributed.”

To help mission planning, the Marine Corps is equipping Ospreys with NOTM-Airborne Increment II, a “Networking on the Move” system that adds SATCOM antennas and a radome over the rear hatch. It’s essentially a secure version of in-flight Wi-Fi on commercial airlines. “We can launch the aircraft, with little to no information, proceed somewhere in general and then in flight conduct flight planning and figure out where we’re going to land,” Miersma said. “So that reduces the amount of time we are on the ground, having to gather the information in order to make the launch.” 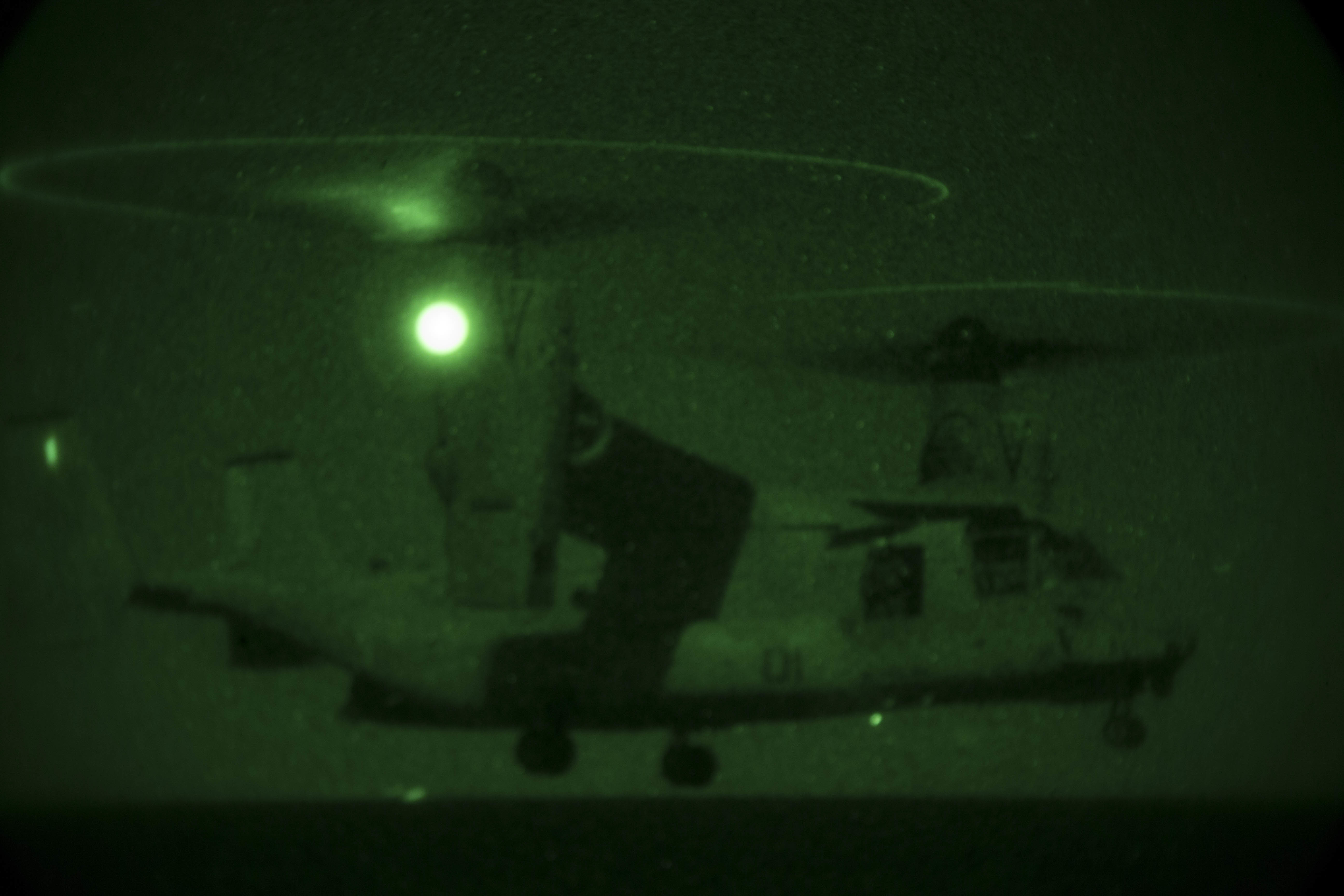 Another promising digital interoperability technology is the MAGTF Agile Network Gateway Link (MANGL), which will link four main networks to transmit data from the aircraft’s sensors, Miersma said. But “we don’t have a way to take information from one network and transfer it to a different type of network,” he said. A software reprogrammable payload would gather that data, translate it and push it over the networks for aircrew and Marines. Automated is the goal, “so instead of having people sucked into their apps and looking at their screens in the back of the aircraft, the goal is to have the sensors pull that information automatically and push it as required to the people that need it the most,” he said. “It would be automatically uploaded to tablets while they’re in flight.

“A Marine in the back could be staring at a MAGTAB looking at an objective area he is going to prior to him ever arriving,” Miersma explained. “It’s creating a situational awareness so when a Marine steps off the aircraft, he has an idea of where he’s going, and he knows immediately how to execute once the wheels hit the deck.”

But tech advancements run up against an old challenge: Weight. “As we develop these systems and we add them to the aircraft, like any other system on the plane, that takes up weight, and it takes away from the capability to carry other things, namely fuel or equipment and troops in the back,” Miersma said. “So a balance is really necessary, I think, when we are designing these systems and putting them on the aircraft to make sure they are giving us a benefit that outweighs that cost of weight.”