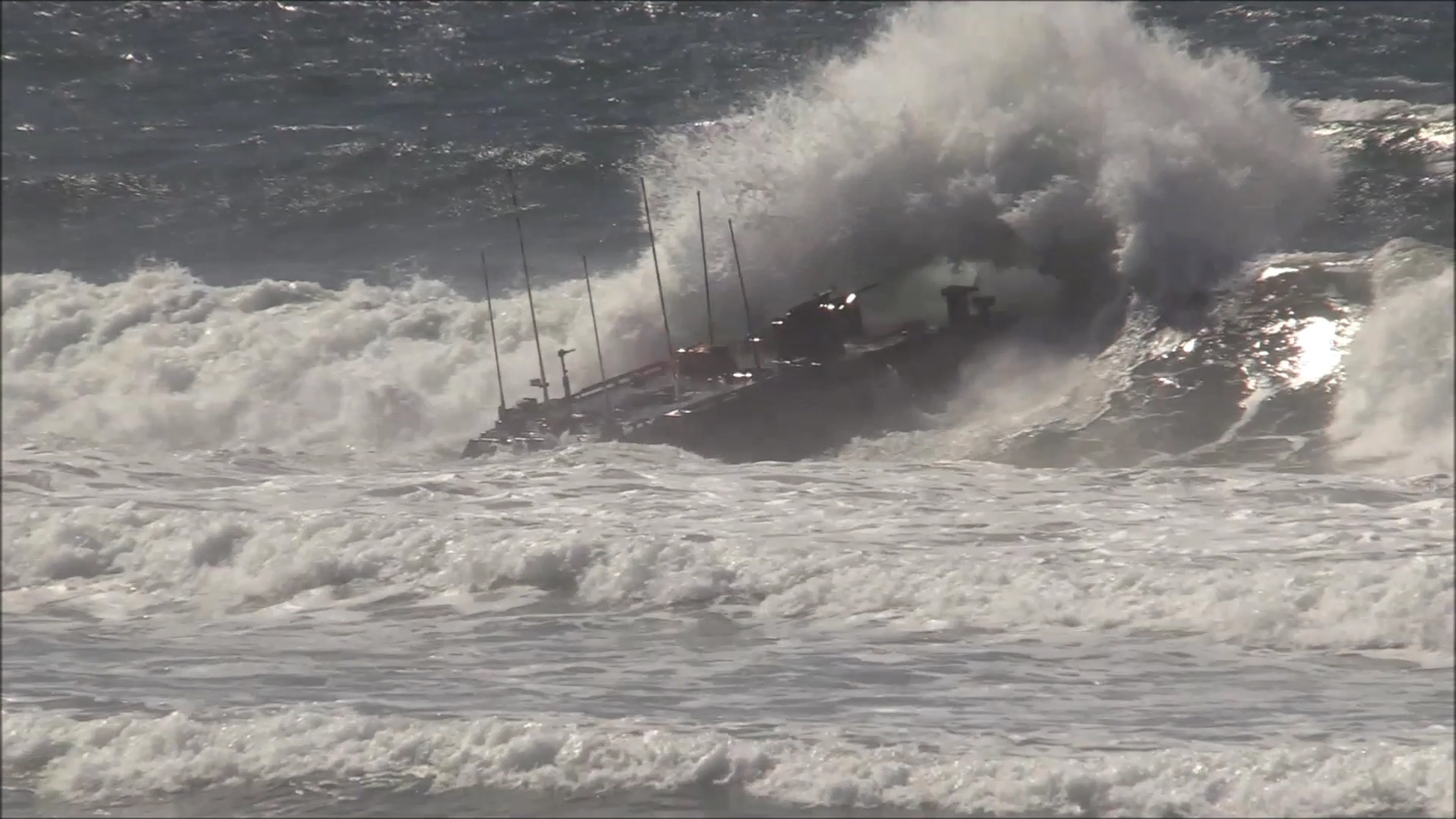 Program Executive Officer Land Systems put the Amphibious Combat Vehicle 1.1 through high surf testing in December 2018 at Vandenberg Air Force Base, California. The vehicle successfully navigated through waves measuring over six feet in height, meeting the ACV 1.2 anticipated requirements, and enabling the Marine Corps to combine the program into a singular ACV family of vehicles. US Marine Corps photo.

SAN DIEGO, Calif. – The Marine Corps has put the Amphibious Combat Vehicle through its paces in the eight months since the service selected BAE Systems to build the new wheeled vehicles, using the original 16 ACVs to conduct high surf testing and cold weather/cold water testing around the country.

The vehicle has performed so well in these tests that the service is officially ditching the original plan to gradually insert the full ship-to-shore swim capability – that robust in-water performance was not required in the original ACV 1.1 and would instead be introduced in a later 1.2 increment – and has instead certified that these first vehicles can perform all ship-to-shore missions without assistance from a connector.

BAE Systems is expected to deliver the first vehicles to the Marine Corps in late May or early June, after winning the program in June and being awarded a second Lot 2 contract in December. Even as the York, Pa., production line is churning, the Marines haven’t wasted any time learning more about the vehicles or beginning to train Marines how to operate them, Col. Kirk Mullins, ACV product manager, told USNI News.

A team of ACV operators from BAE Systems and the Marines’ new equipment training team have been working together to continue reliability growth testing with the 16 vehicles produced under BAE’s engineering and manufacturing development (EMD) contract, Mullins said, with part of that testing designed to determine whether the vehicle could meet all ACV 1.2 requirements and allow the Marines to collapse the two-part program development into a single increment.

“As a part of the 1.1 effort, it was to test the vehicle to the 1.2 requirements, which really centered around a more robust swim capability in the ocean,” Mullins said. The vehicle had already proven it could swim 12 miles in the ocean and be launched and recovered from an amphibious transport dock (LPD-17) during testing done before BAE Systems won a downselect against SAIC. Among the final requirements was a high-surf test that required six-foot significant breaker height waves – which the Marines struggled to get at Camp Pendleton, so they brought the vehicles to Vandenberg Air Force Base about 250 miles up the coast of California. The vehicles performed well in the testing, allowing Mullins to declare that all ACV 1.2 criteria were met and the ACV could be collapsed into a single increment. 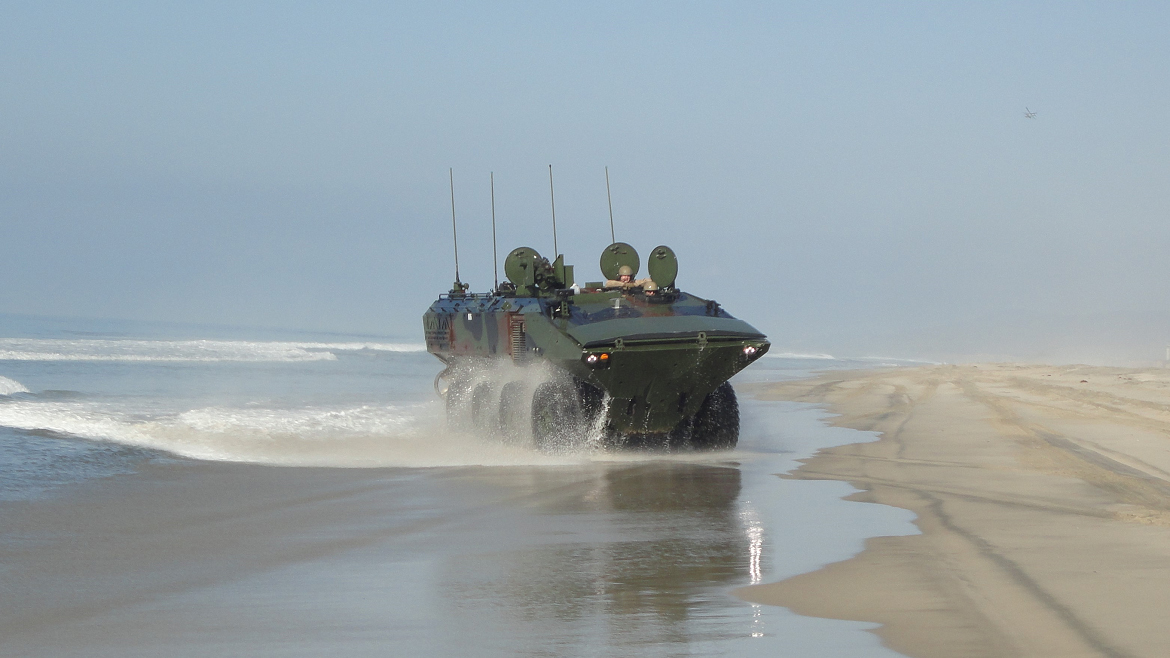 To further make the most of this time, the Marines took the EMD vehicles up to Alaska for cold weather testing earlier this year, and this week vehicles were set to conduct cold water testing in Cape May, N.J., pending sufficiently frigid water conditions, Mullins said.

The next flurry of activity will start this spring, when the first low-rate production vehicles will deliver. The first four vehicles will go to full-up system live-fire testing at Aberdeen Proving Ground in Maryland “to prove that the production variant, the vehicle that comes off the production line, will meet the requirements that we demonstrated during the EMD phase,” Mullins said.

The remainder of the Lot 1 vehicles will begin a logistics demonstration that validates the maintainability and sustainability of the ACVs. BAE Systems’ team will teach the Marines’ new equipment training team how to maintain the vehicles, and that group of Marines will conduct the logistics demonstration, a reliability qualification test and a production qualification test. They will then train the operational Marines that are ultimately selection to participate in the initial operational test and evaluation, Mullins said, adding that the operational unit wouldn’t be selected until later this year. IOT&E won’t take place until about March 2020, but there is much work to be done in the meantime, between the new equipment training team learning to operate and sustain the vehicles, conducting various qualifications and then teaching Marine units to do the same. 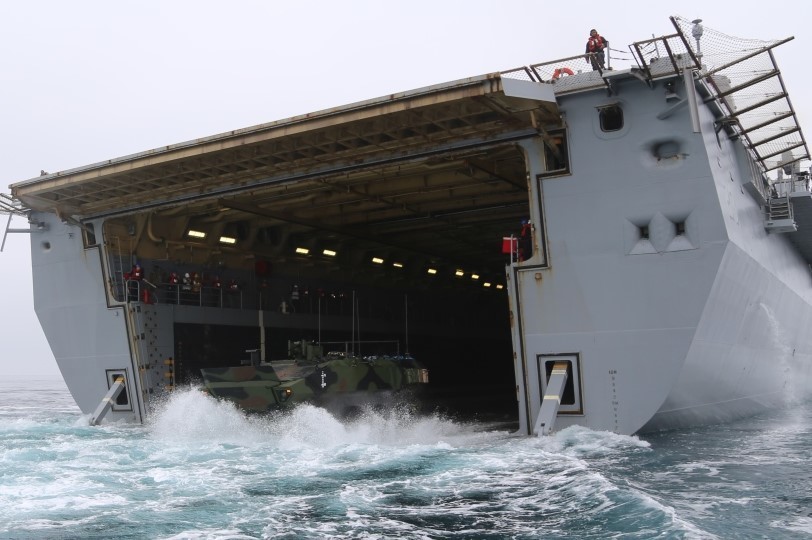 Mullins praised the relationship between the Marine Corps and BAE Systems teams, noting that not only is the training and testing going well but also that lessons learned during this process are being fed back into the vehicle design and the production line. Staff Sgt. Kevin Wheeler, the lead instructor on the new equipment training team, told USNI News during the WEST 2019 conference last week that a handful of changes were identified during the evaluation leading up to the contract award to BAE Systems, mostly related to “situational awareness for the drivers and for the vehicle commanders.”

“As a section leader – and that’s what I did during operational assessment – you’re controlling six of these on the battlefield, so that’s a huge footprint on the battlefield. So if we can make the drivers more aware of where they’re at and the other vehicle commanders aware of where they’re at. So it came down to situational awareness and safety,” he said.

Wheeler said his new equipment training team is taking on tasks big and small to ensure the Marines get the best possible vehicle delivered – including a recent test with various ropes to see which kind was best for towing with the ACV.

Wheeler said the Marines have had the legacy AAVs since the Vietnam war, and though they were used in the initial invasion of Iraq in 2003 and 2004, by 2006 local commanders didn’t want them anymore because they couldn’t keep Marines safe in the face of roadside bombs.

“I don’t want to say they benched us, but said, hey, let’s find a different way,” Wheeler said.
“This vehicle brings us back to the forefront – as far as the AAV community, we are relevant again to make sure that our name is heard and we can get the Marines to the fight and bring the fight to the enemy.”

The Marine Corps plans to buy 204 vehicles in the original personnel variant, and a full-rate production decision for these is expected in the third quarter of Fiscal Year 2020. The service is also in the design phase for the first of three mission-specific variants – the command and control variant will come first, followed by a recovery vehicle and a 30mm gun variant. The first command and control vehicles could be fielded as soon as 2024.