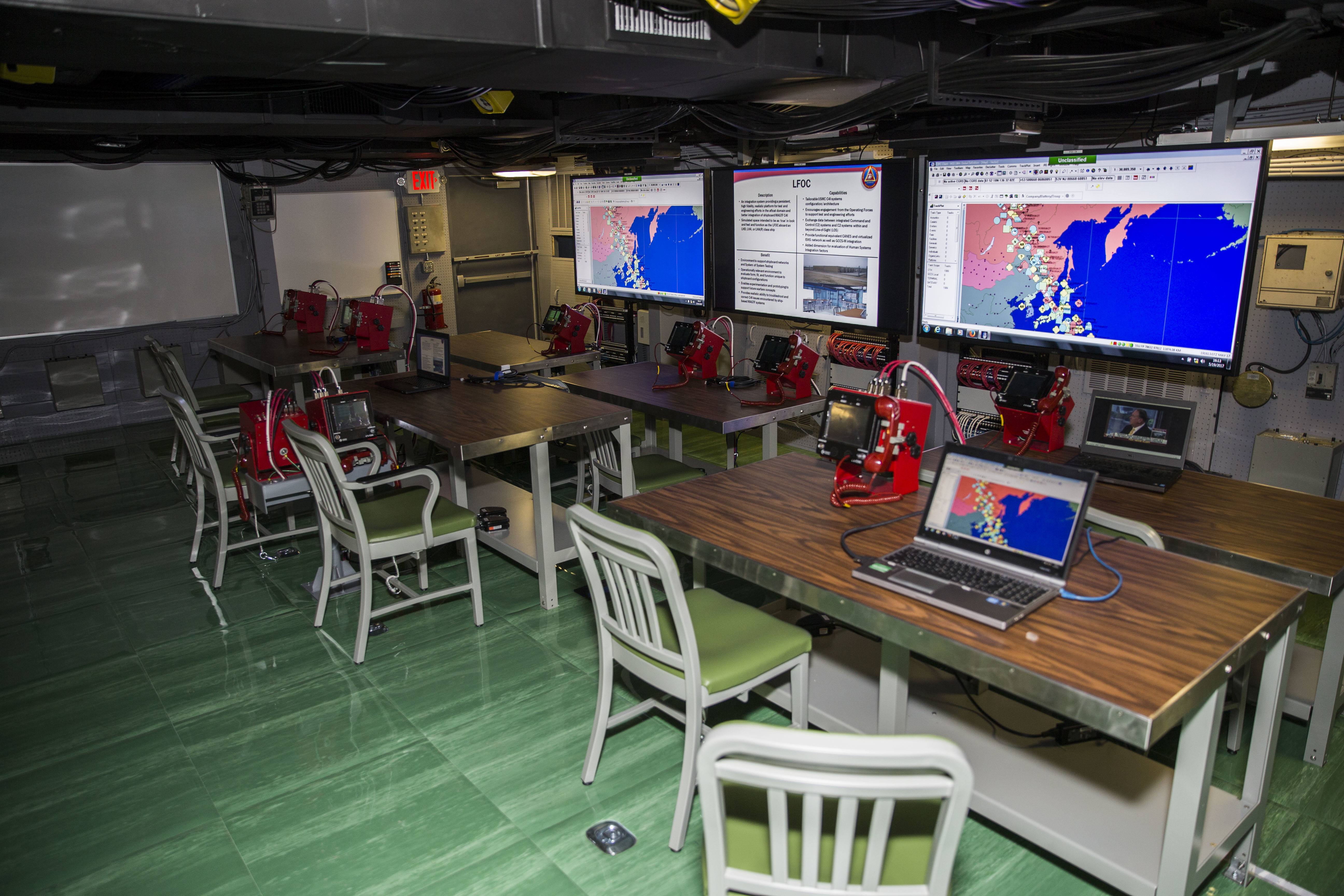 SAN DIEGO, Calif. – The Marines are expanding its shore-based, sea control test lab to help ensure sea-going Marines’ command and control systems will work once they get aboard ship.

The Marine Corps Tactical Systems Support Activity established the Landing Force Operations Center lab at Camp Pendleton, Calif. last year to help integrate Marines’ command, control, communications, computers and intelligence systems into shipboard systems. The idea behind the new lab was to resolve any problems that crop up well before the landing force embarks the ship. Each big-deck amphib has an LFOC, a designated space where the embarked Marine air-ground task force – Marine expeditionary unit or other configured force – can plan, coordinate and execute amphibious missions at sea and ashore.

Nicknamed USS MCTSSA, the lab has realistic spaces, with the same radios, consoles and other systems Marines use when at sea. Now, MCTSSA wants to provide realistic command-and-control spaces for other tasks, including fire control, intelligence and logistics. 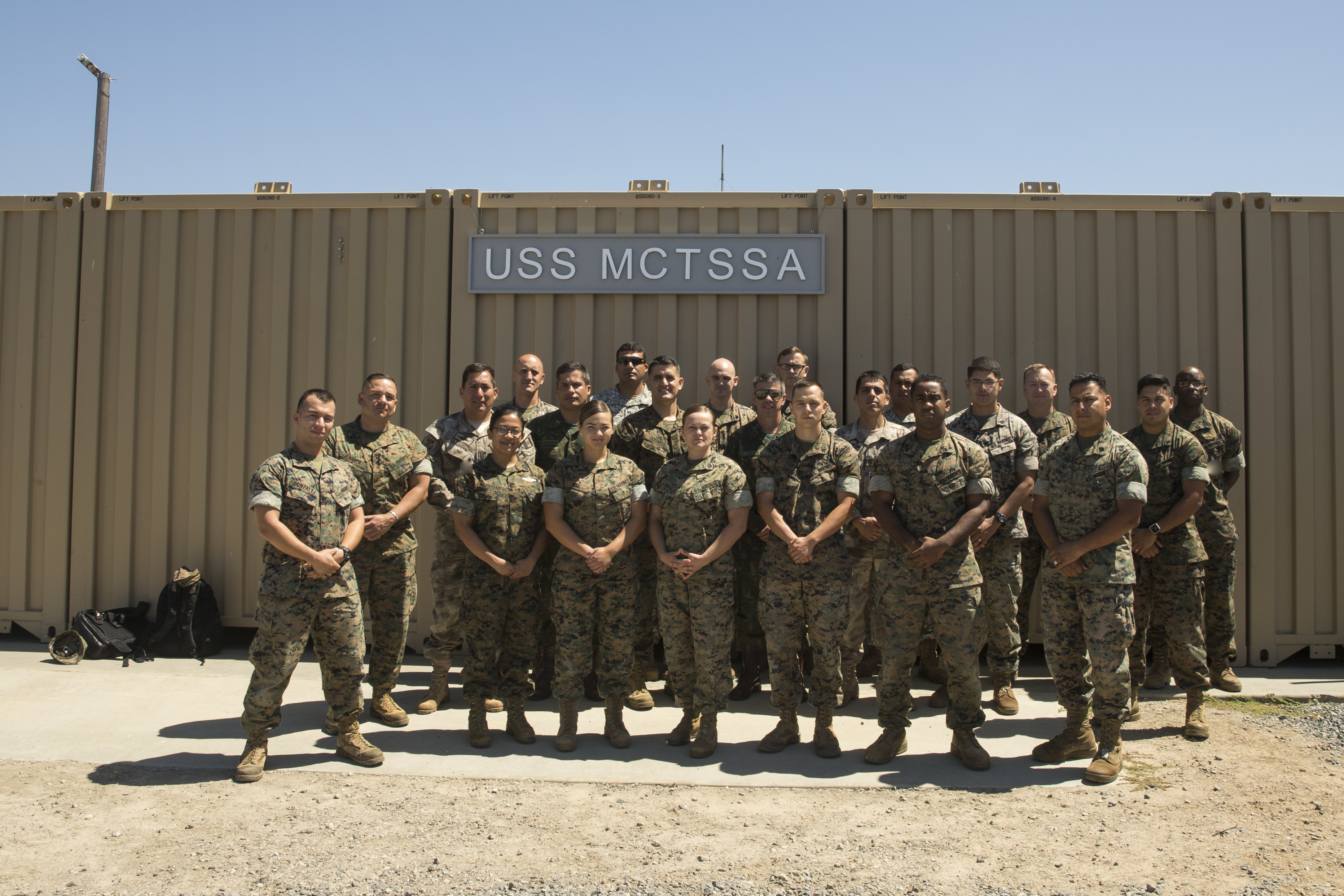 US Marines and foreign military leaders pose for a group photo at the end of PANAMAX 2017 on Marine Corps Base Camp Pendleton, California on Aug. 16, 2017. US Marine Corps Photo

“We need to build this environment with all the Marine spaces that are used (afloat),” Maj. Paxton Miller, MCTSSA’s naval systems integration officer, said Thursday during a briefing at WEST 2019 conference hosted by U.S. Naval Institute and AFCEA.

The lab as added a functioning Supporting Arms Coordination Center, or SACC, Miller said, “and we’ve got space set aside for a JIC, or Joint Intelligence Center, and TacLog (Tactical Logistics Group).”

As it expands, the lab will provide more realistic, immersive training and testing environments for Marine Corps units, working with MCTSSA’s engineers and technical experts, to prepare to operate their C4I systems aboard ship.

“We want to provide early detection and resolution,” Miller said, adding, “if we can identify some of those potential issues well in advance… conducting tests in our afloat lab, we could fix those problems before a Marine ever identifies them on ship.” MCTSSA also developed ship-specific configuration guides to integrate Marines’ C4I systems aboard each big-deck amphib, he said.

Initially established for testing and engineering work, the lab also is playing a role in a new series of systems’ integration checks that MCTSSA developed last year.

The SOT, or System-to-System Operability Test, is designed “to help integrate MEUs before they execute their PTP, or predeployment training program,” Miller said. MEU systems are put through various mission scenarios, such as Call For Fire or Close Air Support, during three phases in the workup cycle.

For the first phase, SOT-1, MCTSSA works with the MEU’s S-6 communications shop, and once the MEU knows their amphib assignments and possible missions, MCTSSA develops test strips as a baseline using the LFOC Afloat lab “to reduce risk” before testing pierside. The second phase, SOT-2, is done pierside to verify and “identify those problems well in advance before the unit gets onboard and correct those problems prior to their embarkation,” he said.

MEU resources are used during the third phase, SOT-3, rather than MCTSSA equipment, since “ultimately that’s not the gear that’s going to be going afloat and deploying on ship,” Miller said. “We want to use the embarked systems that the MEU is going to use and with their operators.” Testing scenarios are the same as done in SOT-2.

SOT “is a full, multi-phase process that reduces a lot of risk and fixes a lot of what we think are issues… Marines are going to face whenever they go out and deploy,” Miller said.

The hands-on training and testing the technical experts provide to ARG/MEU sailors and Marines is paying off, several officials said. “We have had few C4I issues early on,” Cmdr. Matthew Hoekstra, deputy chief of operations for San Diego-based Expeditionary Strike 3, told a Friday audience during a WEST panel discussion on Navy-USMC operations. “The IT Marines’ ability to set up the network has gotten better.”

Col. Clay Tipton, a former 11th MEU commander and 13th MEU operations officer, said the benefits of “the early-and-after approach in setting up the networks aboard ship” also helps build experience for the Marines tasked with maintaining the critical IT systems. “It takes a lot of hard work,” Tipton said, adding, “the systems continue to become more complex,” especially in connecting networks and systems across an ARG/MEU’s three different ship platforms.

In September, the Camp Pendleton-based 11th MEU was among the first units to go through the SOT process as the unit prepared for a scheduled overseas deployment with amphibious assault ship USS Boxer (LHD-4). Most recently, MCTSSA finished a SOT with Japan-based 31st MEU and amphibious assault ship USS Wasp (LHD-1), and previously worked with East Coast-based USS Iwo Jima(LHD-7). “We’ve grown to the point where we can conduct this cycle for each deploying MEU,” Miller said.