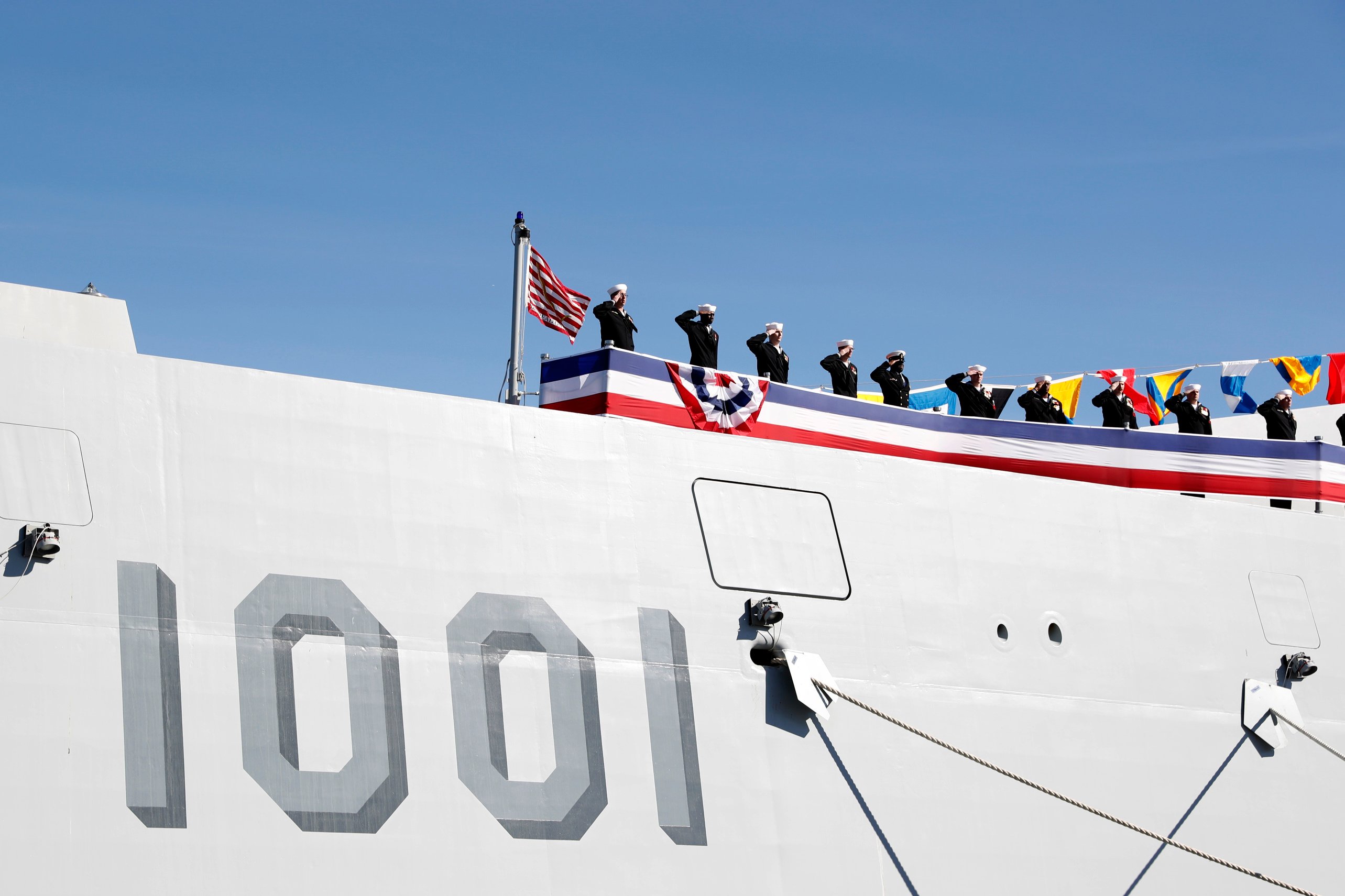 The crew of the Navy’s newest Zumwalt-class destroyer, USS Michael Monsoor (DDG-1001), brings the ship to life during its commissioning ceremony on Jan. 26, 2019. US Navy Photo

The Navy commissioned its newest warship, a sleek, high-tech destroyer bearing the name of a fallen Navy SEAL who gave his life to save others when their team came under attack during fighting in Iraq.

USS Michael Monsoor (DDG-1001), the second Zumwalt-class destroyer to be commissioned into the fleet, is named for Special Warfare Operator 2nd Class Michael Anthony “Mikey” Monsoor. The ship is homeported at Naval Base San Diego, Calif. In honoring Monsoor, the ship’s command set the first watch team as all second-class petty officers.

Monsoor, a Long Beach, Calif., native, joined the Navy in March 2001 and later graduated with Basic Underwater Demolition/SEAL Class 250 in September 2004. Two years later, Monsoor and his platoon with SEAL Team 3 deployed to the embattled Iraqi city of Ramadi.

On Sept. 29, 2006, Monsoor manned a sniper-hide position on a roof when an enemy hand grenade hit his chest and bounced onto the floor. He yelled “grenade” to alert his teammates but realized they couldn’t escape so he threw himself on the grenade before it detonated, killing him. He was 25. His sacrifice earned him the Medal of Honor, the nation’s highest award for combat heroism.

“Michael Monsoor’s story is a testament of what’s best about the American spirit,” said Adm. Bill Moran, the Navy vice chief of operations. “He has gifted us with a legacy of selfless sacrifice, teamwork, devotion, love, bravery and, most of all, love of country and his fellow soldiers, airmen, SEALs and Marines.”

Fueled by Monsoor’s spirit, the ship and crew are “ready to answer the nation’s call anywhere and anytime she’s asked,” Moran said during the ceremony, which the Navy recorded and streamed live online.

Sally Monsoor, Monsoor’s mother and the ship’s sponsor, thanked the crowd and military, including SEALs. Then she gave the order for the crew to honor her son’s legacy: “Man our ship and bring her to life.” 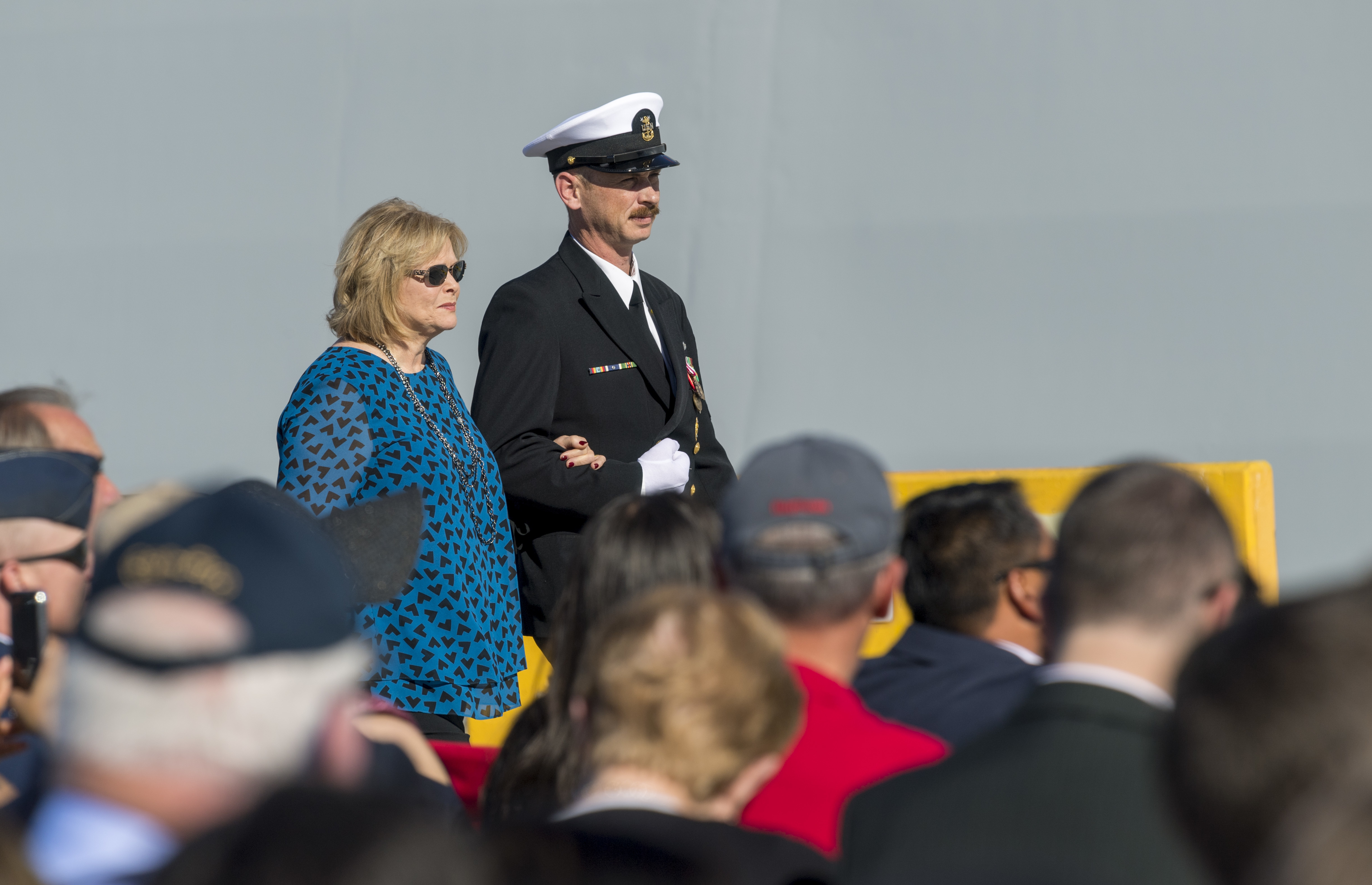 Sally Monsoor, mother of Michael Monsoor and the ship’s sponsor, is escorted on stage during the commissioning ceremony for the guided-missile destroyer USS Michael Monsoor (DDG-1001) on Jan. 26, 2019. US Navy Photo

Joining the ship’s crew running to board the Michael Monsoor up a pair of ladders were a number of Monsoor’s former teammates as the Navy Region Southwest Band played “Anchors Aweigh.”

“When you man the rails today and you man your first watch stations at (general quarters), you bring this ship to life in the spirit and legacy of Michael Monsoor with toughness, courage and love, and you will be the defenders. You will defend. Stay in the Fight,” said Vice Adm. Timothy Szymanski, deputy commander of U.S. Special Operations Command and a veteran SEAL.

The ship’s angled silhouette is unusual along the waterfront’s gray hulls. The nearly 16,000-ton Michael Monsoor was built by General Dynamics Bath Iron Works in Bath, Maine. The ship is 610 feet in length, has a beam of 87 feet, and a navigational draft of 27 feet. General Dynamics delivered the ship to the Navy in April 2018.

Rep. Scott Peters (D-Calif.), a House Armed Services Committee member, reflected on the significance of a piece of Monsoor’s legacy, a well-worn camouflage cap displayed in a glass case in the ship’s quarterdeck. “’You never quit.’Those are the words Michael Monsoor wrote with permanent marker inside the camouflage hat he wore throughout his BUDS training at the Naval Special Warfare Training Center here at Coronado,” Peters said. 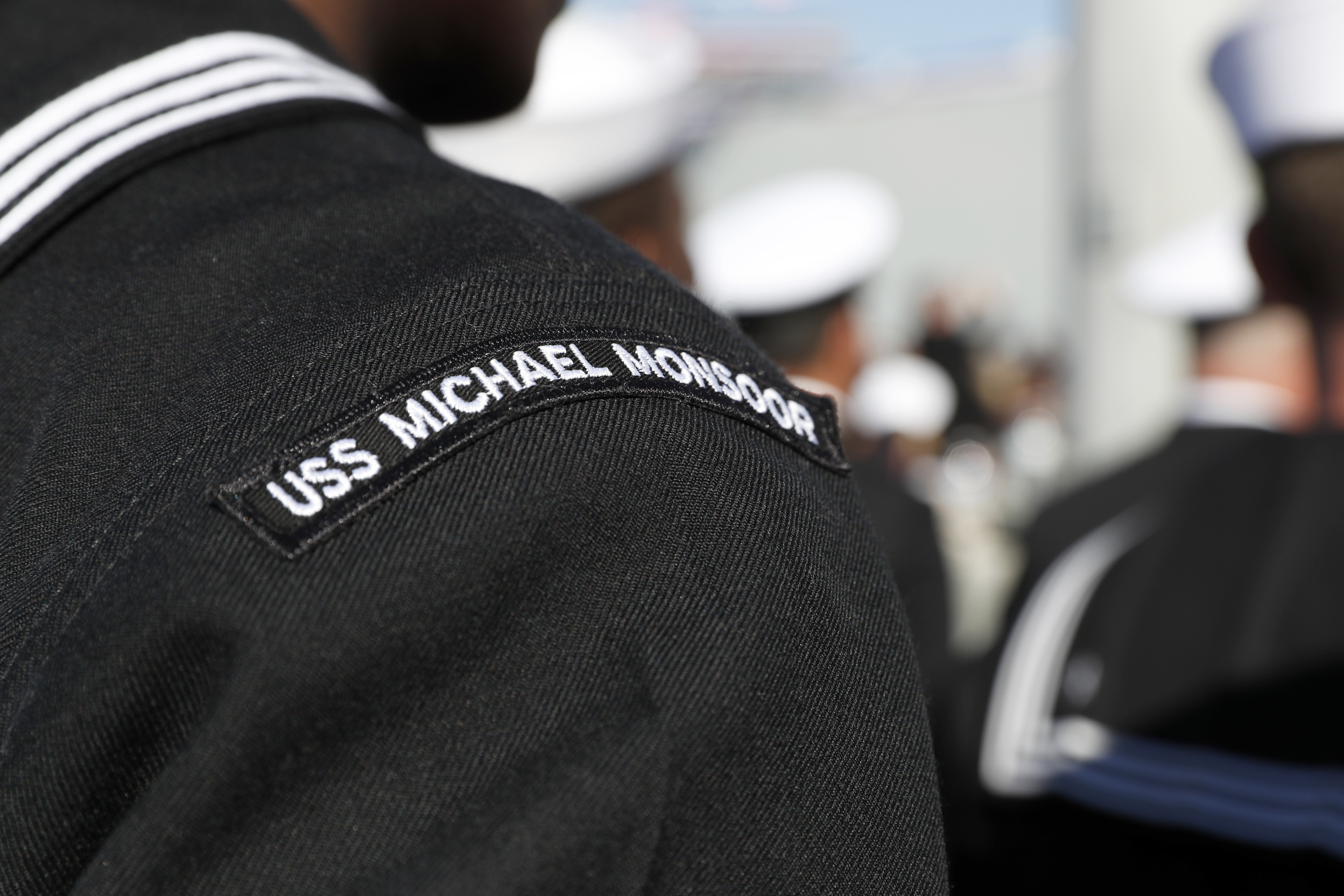 Sailors stand in formation during the commissioning ceremony of USS Michael Monsoor (DDG-1001) on Jan. 26, 2019. US Navy Photo

“The letters are faded from time and wear but their significance and how Michael applied them to his life are as vivid and meaningful today as they were that day when he wrote them many years ago as his reminder to persevere,” he said. “The words – ‘You never quit’ – are also brandished prominently throughout the ship as if Michael himself is offering encouragement to every man and woman who sets sail upon her.”

Army Maj. Gen. Ronald P. “Ron” Clark spoke about “Mikey” and about the Battle of Ramadi, a joint fight with units operating with Navy SEALs including the 1st Battalion, 506th Infantry Regiment, 101st Airborne Division, which he commanded at the time.

“Our band of brothers was brought together during a fight against a tough and violent enemy,” Clark said, noting how those combat experiences sealed bonds that transcended any differences among task force members. “In fact, we referred to SEAL Team 3 as Army SEALs, and still do,” Clark noted, drawing chuckles among the crowd peppered with current and veteran SEALs. 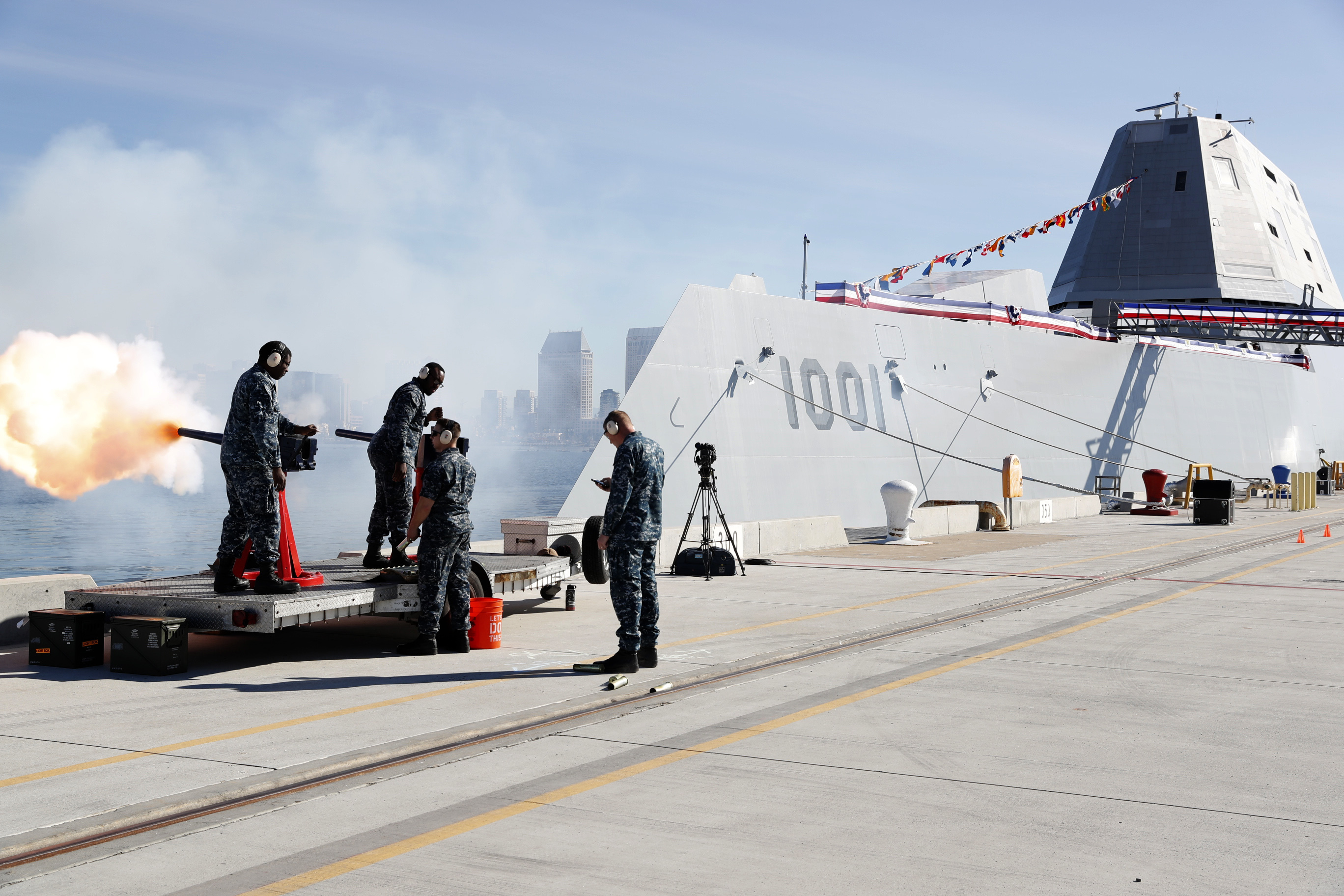 Sailors from Naval Base Coronado Security Department perform a 19-gun salute during the commissioning ceremony of USS Michael Monsoor (DDG-1001). on Jan 26, 2019. US Navy Photo

Capt. Scott M. Smith, Michael Monsoor’s commanding officer, praised the work of the ship’s 143-member crew and the impact of their namesakes.

“In all of the descriptions of Michael, a consistent theme emerges: He was a good dude. He was good. He affected the lives of those who served alongside him and through his example, he continues to affect history and will as long as this ship sails,” Smith told the crowd. “This is what we give you today, the good ship Michael Monsoor.”

“I think if Mikey saw the ship, he’d be like, ‘That’s too much. That’s not for me. I’m just laid back,’” said Chief Warrant Officer Benjamin Oleson, a SEAL who served with Monsoor in Ramadi, according to the Navy News story. “But I think it’s truly an honor that the Navy did this, especially the type of destroyer that it is… (with) its cutting-edge, advanced technology. I think, with Mikey in the platoon, always at the front, leading the way, the way the ship is designed, it’s going to be leading the way in the future.”