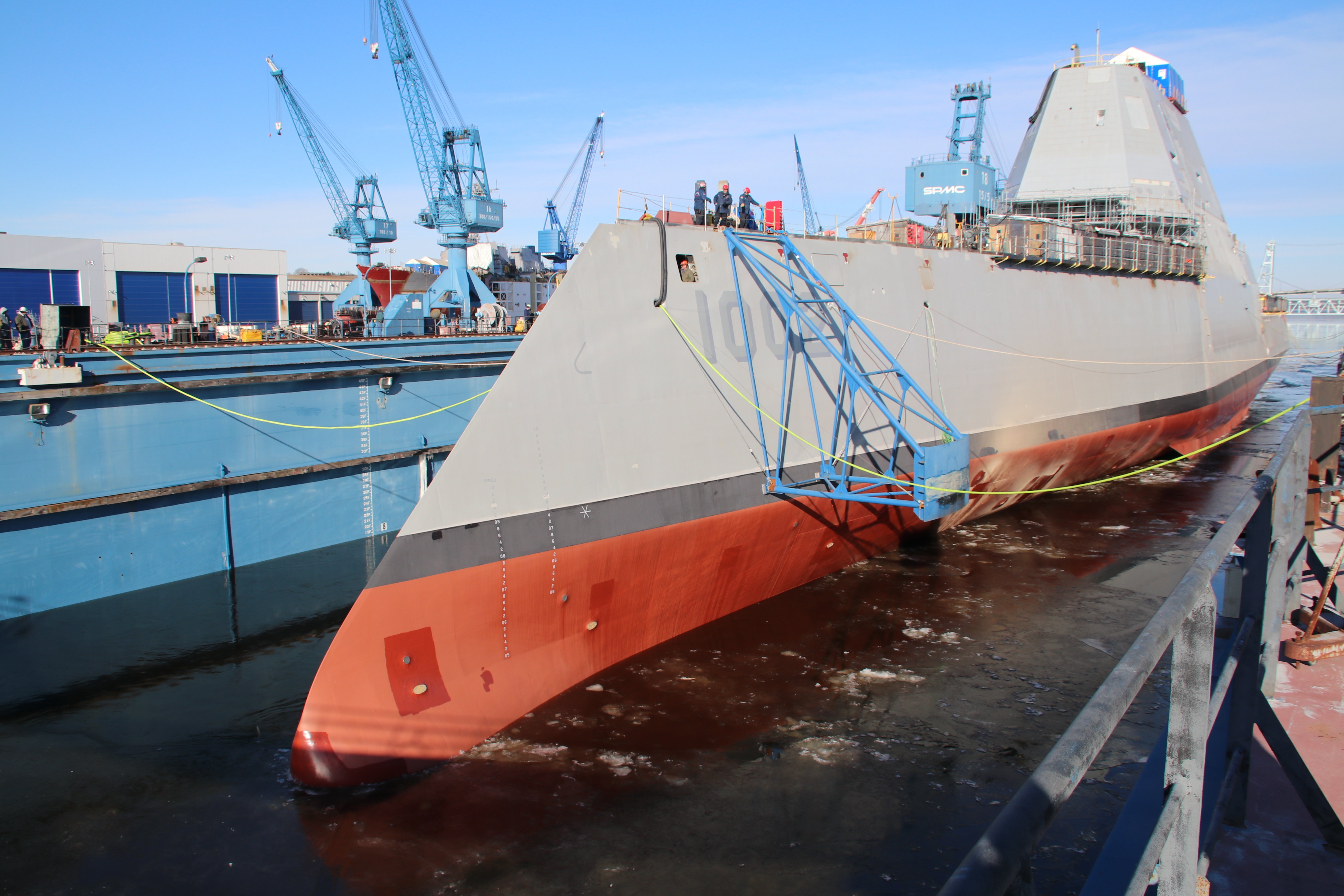 Guided-missile destroyer Lyndon B. Johnson (DDG-1002) is made ready before flooding of the dry dock at General Dynamic-Bath Iron Works shipyard. US Navy Photo

ARLINGTON, Va. – The Navy is still looking at a variety of options to arm the dormant 155mm Advanced Gun Systems aboard the Zumwalt-class of guided-missile destroyers, the service’s DDG-1000 program manager said on Wednesday.

The rounds Naval Sea Systems Command is studying for the BAE-built AGS include the hyper velocity projectile built for the electromagnetic railgun that’s also being tested with the Navy’s standard 5-inch gun, Capt. Kevin Smith said during a presentation at the Surface Navy Association Symposium.

Smith did not specify the other types of ammunition NAVSEA was studying, however, the Navy had previously considered the guided Raytheon Excalibur 155mm guided artillery round that has been fielded by the Army and Marines but abandoned the plan.

In 2017, USNI News reported that the Zumwalts would be retooled from their original focus of supporting troops ashore from the littorals into a blue water, surface strike combatant that will field Standard Missile 6s and a maritime strike version of the Tomahawk land-attack missile

The three Zumwalts are designed around two major AGS installations ahead of the deckhouse and the ammunition magazines underneath the deck of the destroyer.

The AGS was designed to field the Lockheed Martin Long Range Land Attack Projectile (LRLAP) rounds that were custom-designed for the system. The service’s planned buy of the 2,000 rocket-assisted guided projectiles was abandoned when the cost of each round rose to about $1 million.

“The surface Navy is really excited about this capability,” Smith said. “But yeah, there’s nothing being pursued per se except for testing, and still watching industry.”

Apart from AGS, the Navy is continuing to test the combat system for first-in-class Zumwalt ahead of a planned 2020 initial operational capability, Smith said.

Part of that work includes tests of the ship’s combat system aboard the Navy’s Self Defense Test Ship (SDTS), the former USS Paul Foster. The Zumwalts field a Raytheon combat system that is unique to the class. As part of the testing, the SDTS will fire a certain number of missiles using the Raytheon combat system. In parallel, the Navy is testing the AN/SPY-3 radar at an installation at Wallops Island test facility.

“A lot of good work here, and we’re looking forward to collecting some good data from the live ordinance events,” Smith said.