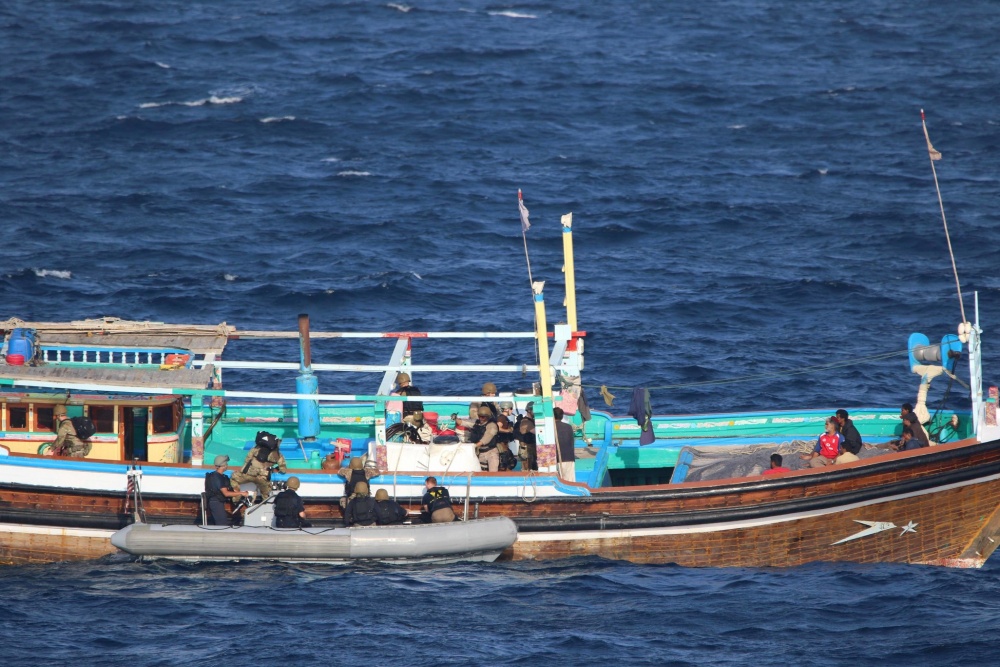 Members of the guided-missile destroyer USS Chung-Hoon’s (DDG-93) visit, board, search and seizure team (VBSS) board a stateless dhow that was transporting 11,000 pounds of illicit drugs in the international waters of the Gulf of Aden, Dec. 27, 2018.

More than 5.5 tons of hashish were seized by the crew of Arleigh Burke-class guided-missile destroyer USS Chung-Hoon (DDG-93) while patrolling the Gulf of Aden.

Chung-Hoon is one of several ships conducting security patrols along suspected maritime smuggling routes in the U.S. 5th Fleet area of operations. The patrols are to interdict clandestine shipments heading into Yemen and Somalia, according to the Navy.

“It’s critical in an effort to curb the ongoing shipments of illicit weapons and narcotics,” Cmdr. Brent Jackson, the commanding officer of Chung-Hoon, said in a statement. “I am grateful that Chung-Hoon was able to play a small part in an ongoing effort to deter and limit these illicit shipments of contraband.”

The U.S. Navy coordinates such interdictions with several partner nations as part of a task force patrolling the region to stop the flow of illicit weapons and narcotics. By restricting the flow of illegal drugs, the Navy and task force partner nations cut off an important source of funding for terrorist organizations operating in the region. In 2017, the partnership seized 19.17 tons of narcotics, according to the task force.

In 2016, the Navy seized a shipment of weapons bound for Houthi rebel fighters in Yemen. A boarding team from Cyclone-class patrol craft USS Sirocco (PC-6) seized 1,500 AK-47s automatic rifles, 200 RPG launchers and 21 .50-caliber machine guns in the hold of an unflagged stateless vessel in the Persian Gulf. The weapons were believed to have been shipped from Iran, according to the Navy.