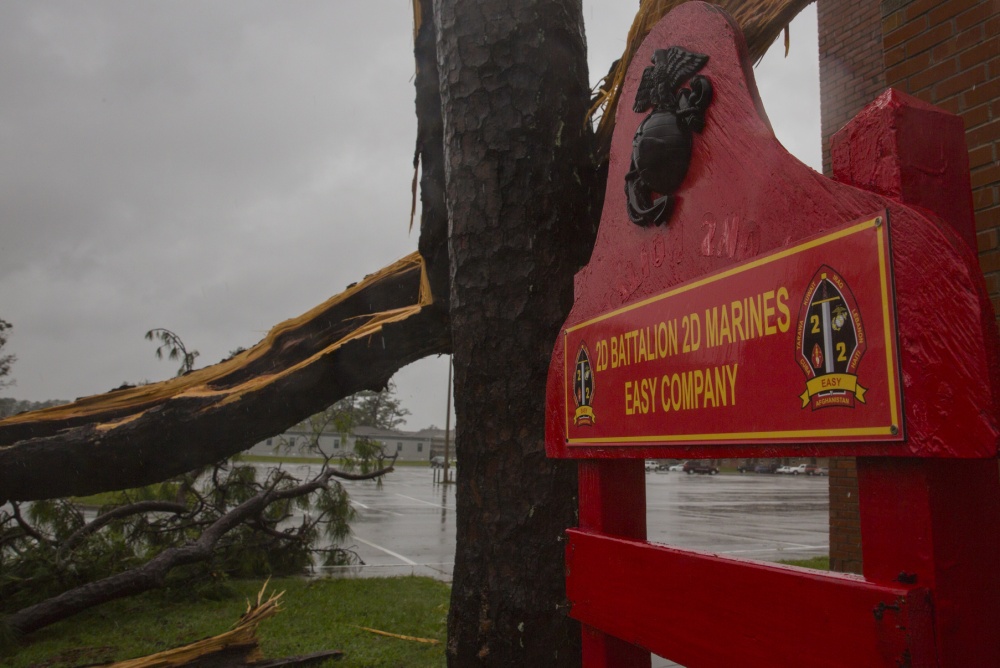 The Marine Corps is looking at a hefty construction cost to repair or replace hundreds of buildings at Marine Corps Base Camp Lejeune damaged during Hurricane Florence.

After evaluating storm damage, about 31 Military Construction (MILCON) projects on the base – not including base housing – a significant number were found to be either so damaged or so old it would be more cost-efficient to replace them, Marine Corps Commandant Gen. Robert Neller said during a Wednesday hearing of the Senate Armed Services subcommittees on seapower and readiness and management support. The rebuilding cost is estimated to be between $3.6 billion and $3.7 billion.

“The storm was very slow moving,” Neller said. “There was a lot of wind, but it sat on top of the base and rained for two or three days.”

Jacksonville, N.C., home to Camp Lejeune, recorded 25.28 inches of rain by September 17, two days after Florence made landfall in nearby Wrightsville Beach, N.C., according to the National Weather Service.

Many of the Camp Lejeune buildings are old and suffered roof damage, Neller explained. With the long rainstorm, water seeped in, causing mold and internal structural problems. Buildings could be repaired, but the age of the buildings increases the likelihood that similar damage could occur during another major storm, he said.

Concern about future storm damage was raised by Secretary of the Navy Richard V. Spencer, who joined Neller at Wednesday’s hearing. When asked about climate change, Spencer said the Navy and Marine Corps both have major force concentration centers along the coast, putting their personnel and facilities at higher risk of experiencing extreme weather.

Spencer said the Navy has bases “exposed to what we’ve seen now with 100-year storms that come every two or three years. We’re going to have to start addressing this.”

Meanwhile, Neller said the pace of housing repairs is not as fast as everyone would like, but progress is being made to repair housing. Damage to base housing was so extensive at Camp Lejeune and Marine Corps Air Station Cherry Point that both communities are not accepting new arrivals.

Atlantic Marine Corps Communities, which manages both those housing communities, reported 70 percent of the 6,182 housing units were damaged by Hurricane Florence. As of November 29, more than 565 roofs had been either repaired or replaced, more than 1,100 home exteriors have been fixed, and 190 homes had their interiors repaired, according to Atlantic Marine Corps Communities.