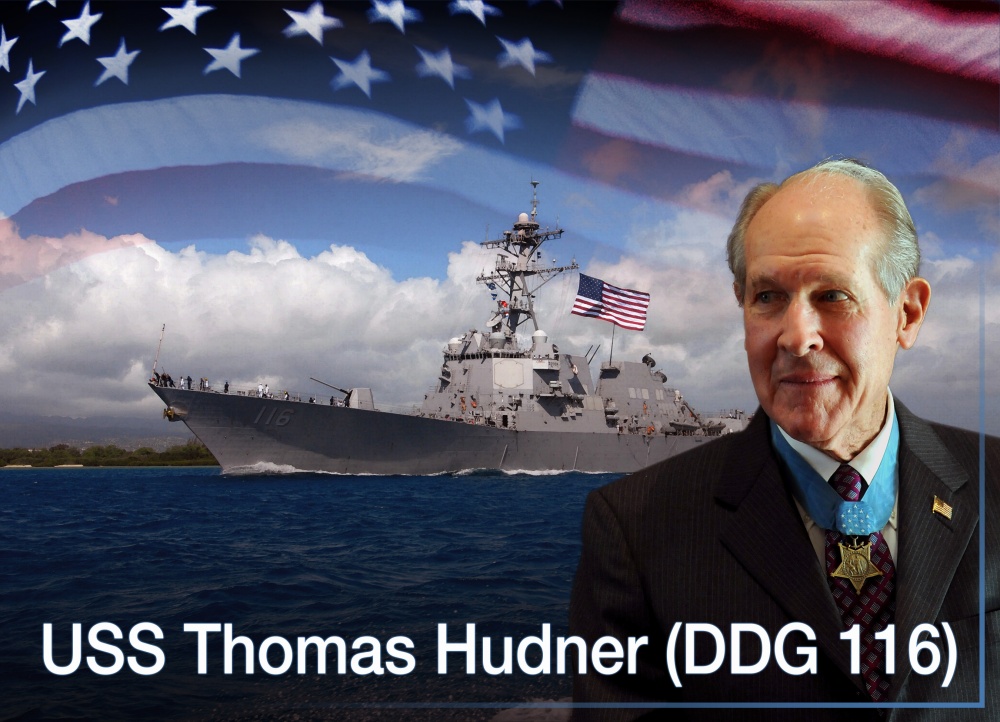 An artist rendering of the next Arleigh Burke-class guided-missile destroyer USS Thomas Hudner (DDG 116). The ship is named after Thomas Hudner, a Medal of Honor recipient and retired Naval aviator. US Navy illustration

The Navy’s newest Arleigh Burke-class guided-missile destroyer, Thomas Hudner (DDG-116) is scheduled to be commissioned Saturday morning in a ceremony in Boston.

Hudner will become the 66th Arleigh Burke-class destroyer to join the fleet and will be homeported at the Naval Station Mayport, Fla. Hudner, built by General Dynamics Bath Iron Works (BIW), in Bath, Maine. The Navy restarted the DDG-51 line in 2008 with the award of four ships split between BIW and Huntington Ingalls Industries.

Hudner’s namesake, Capt. Thomas Hudner was a native of Fall River, Mass., and a 1946 graduate of the U.S. Naval Academy. As a Naval aviator, Hudner was awarded the Medal of Honor for his actions during the Korean War trying to save his downed wingman near the Chosin Reservoir, according to the Navy.

On Dec. 4, 1950, then Lt. j.g. Hudner, his wingman Ens. Jesse L. Brown and three other pilots were flying an armed reconnaissance mission over North Korea’s Chosin Reservoir to attack North Korean and Chinese troops threatening U.S. forces, according to a description of events on the U.S. Naval Institute Naval History Blog.

Brown’s F4U-4 Corsair was hit by anti-aircraft fire and crash landed. Hudner, seeing Brown was alive but unable to escape his downed fighter, decided to crash land his plane to help Brown until a rescue helicopter could arrive. Ultimately, Hudner and crew members of a rescue helicopter were unable to save Brown, as told by the Naval History Blog.

Hudner’s Medal of Honor was the first awarded for actions in Korea. He passed away Nov. 13, 2017, age of 93, and was buried at Arlington National Cemetery.

“The commissioning of USS Thomas Hudner continues a spirit of faithful service that Thomas Hudner embodied throughout his life, and his legacy will live on in those who serve aboard this ship,” Secretary of the Navy Richard V. Spencer said in a statement. “USS Thomas Hudner is a testament to what the service and teamwork of all of our people – civilian, contractor and military – can accomplish together, from the start of the acquisition process to the delivery to the start of the first watch.”