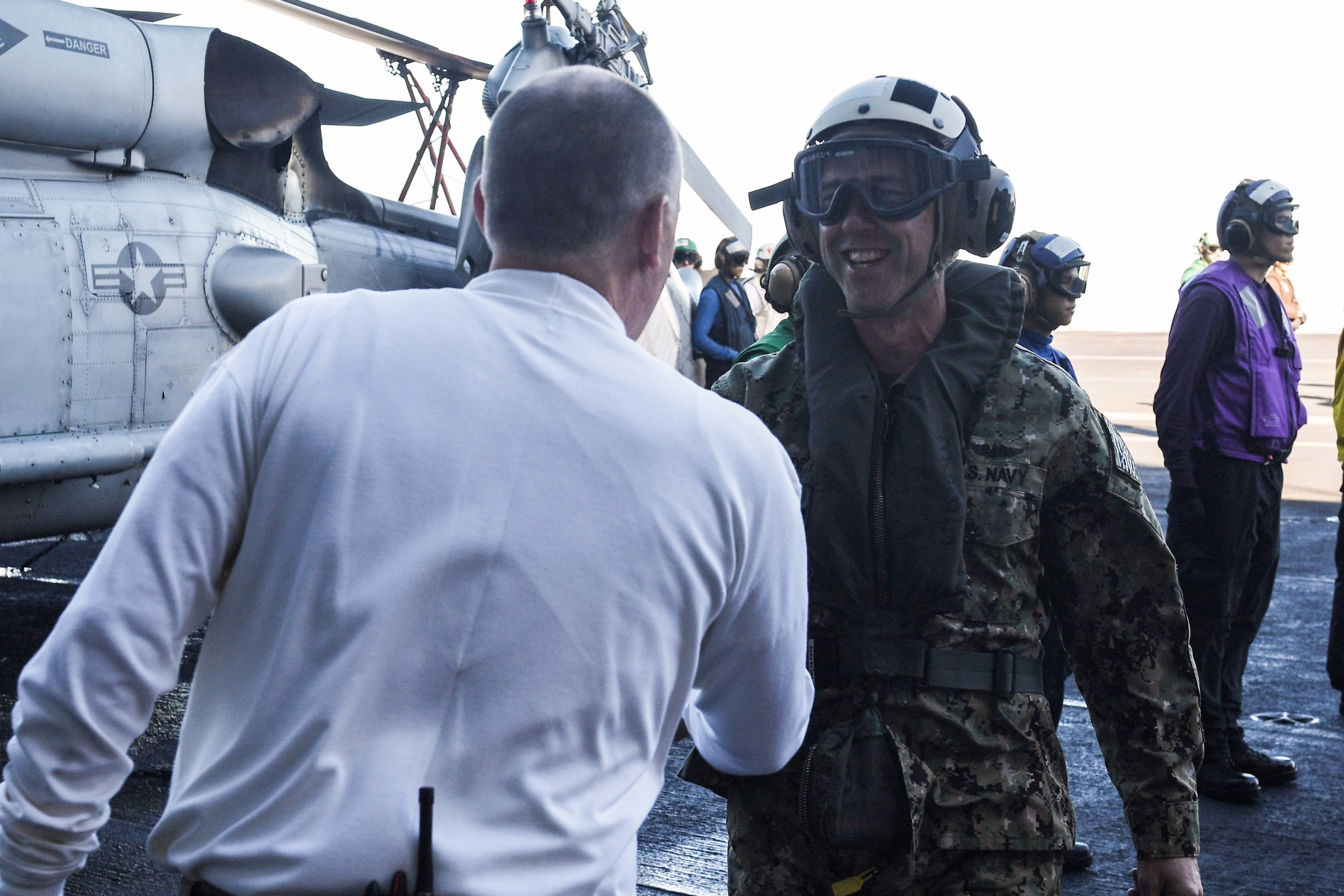 The chief of naval operations and the Harry S. Truman Carrier Strike Group leadership said their first deployment under the dynamic force employment (DFE) model sharpened their proficiency in high-end warfare more than expected, the leaders said during a media call while aboard USS Harry S. Truman (CVN-75) for Thanksgiving.

The Truman CSG is nearing the end of its scheduled “deployment phase” and will return home to maintain its readiness in the “sustainment phase,” under the Optimized Fleet Response Plan. Asked how the first DFE deployment had gone, CNO Adm. John Richardson said “magnificently.”

“We laid out some very challenging goals for ourselves in terms of this dynamic deployment. I would say that the Navy by nature is predisposed to being dynamic and moving around. It is very good to kind of get back into that game a little bit,” he said, noting the Truman strike group had performed a wide range of mission sets in a much more diverse set of environments than a typical East Coast carrier deployment, which would cut through the Mediterranean to launch air strikes on Middle East targets from either U.S. 6th Fleet or U.S. 5th Fleet waters.

“I talked about this dynamic force employment with some of my predecessors, and they looked at me like, well what else have you been doing? This is what we do in the Navy,” he said during the call.
“So we don’t have to go too far back to sort of recapture what it means to be moving around the world as a strike group or an individual deployer and really kind of making everybody guess, hey where’s this team going to show up next? What are they going to bring to us next?” 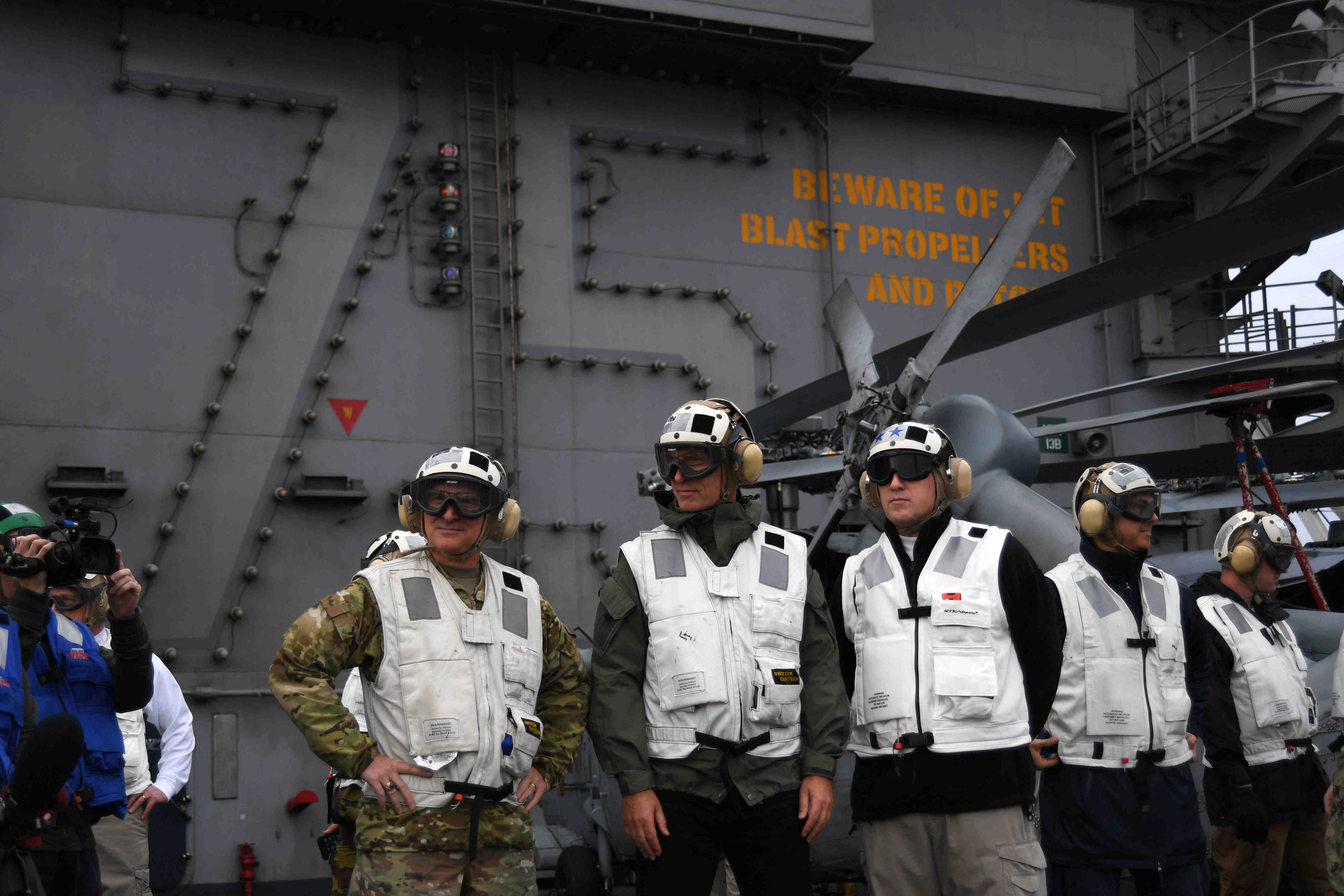 Reflecting on how DFE forced the Navy to think a little differently about this carrier strike group deployment, Richardson said Truman’s foray into the Arctic Circle for two months was a “back to the future” event that forced the Navy to research how the service operated and sustained ships in the high north during the Cold War era.

Capt. Nick Dienna, Truman’s commanding officer, said during the call that one example of that involved “an old Navy Arctic operations publication, and within that publication there was a list of the snow and ice removal equipment each ship should be equipped with. And number-one on that list was 48 baseball bats. So we outfitted ourselves with 48 Louisville Sluggers and some additional equipment. And I bring this up to sort of demonstrate that, while operating in some of the areas that we did were beyond some of our personal experience, the body of knowledge and the experience base in the U.S. Navy still exists, and it’s a matter of recapturing lessons learned and continuing to learn rapidly and relevantly.”

The unexpected locations the carrier strike group visited were part of the DFE’s stated goal of creating operational unpredictability. Truman Strike Group Commander Rear Adm. Gene Black said during the call that that led to the CSG spending more time with NATO allies than usual, which ultimately allowed for more high-end training.

“We’ve gotten the opportunity to cover most of the Med and on up into the North Atlantic and operate in partnership with the Moroccans, the Italians, the French, the Brits, the Canadians, the Norwegians, and the Portuguese. We got to partner with our own Air Force doing some very high-end training with the air wing. So to me the opportunities are amazing,” Black said.
“We did the French Air Defense Week in partnership with the French, got up to the French ranges, operated with some of their ships. Operated with the U.K. for Flag Officer Sea Training, FOST. The opportunity … is an operator’s dream. You show up and you get to do things with NATO partners and allies that we haven’t been able to do to this high-end to the same extent. So it’s an absolute thrill.”

That high-end training had a particular eye towards anti-submarine warfare (ASW). Black acknowledged his strike group had done more ASW training with partners and with U.S. Navy P-8A Poseidons stationed in Europe than a typical strike group would do, and he said that emphasis started with the group’s predeployment training.

“We were so well prepared for the high-end ASW fight in our COMPTUEX. It was the best ASW training I’ve seen in my career – and I’ve been around long enough to remember when it was the centerpiece in the late ‘80s, and now it’s back and it’s more demanding than it was then. We were ready for whatever came at us, and we did get to use some of those tools” during the deployment.

Richardson called ASW a “team sport,” both within the Navy – where P-8s, surface ships and attack submarines all contribute to the mission – as well as between the U.S. and its partners and allies.

“Nothing brings the team together like a challenge like that, and they’ve really done an excellent job rising to that challenge,” he said. 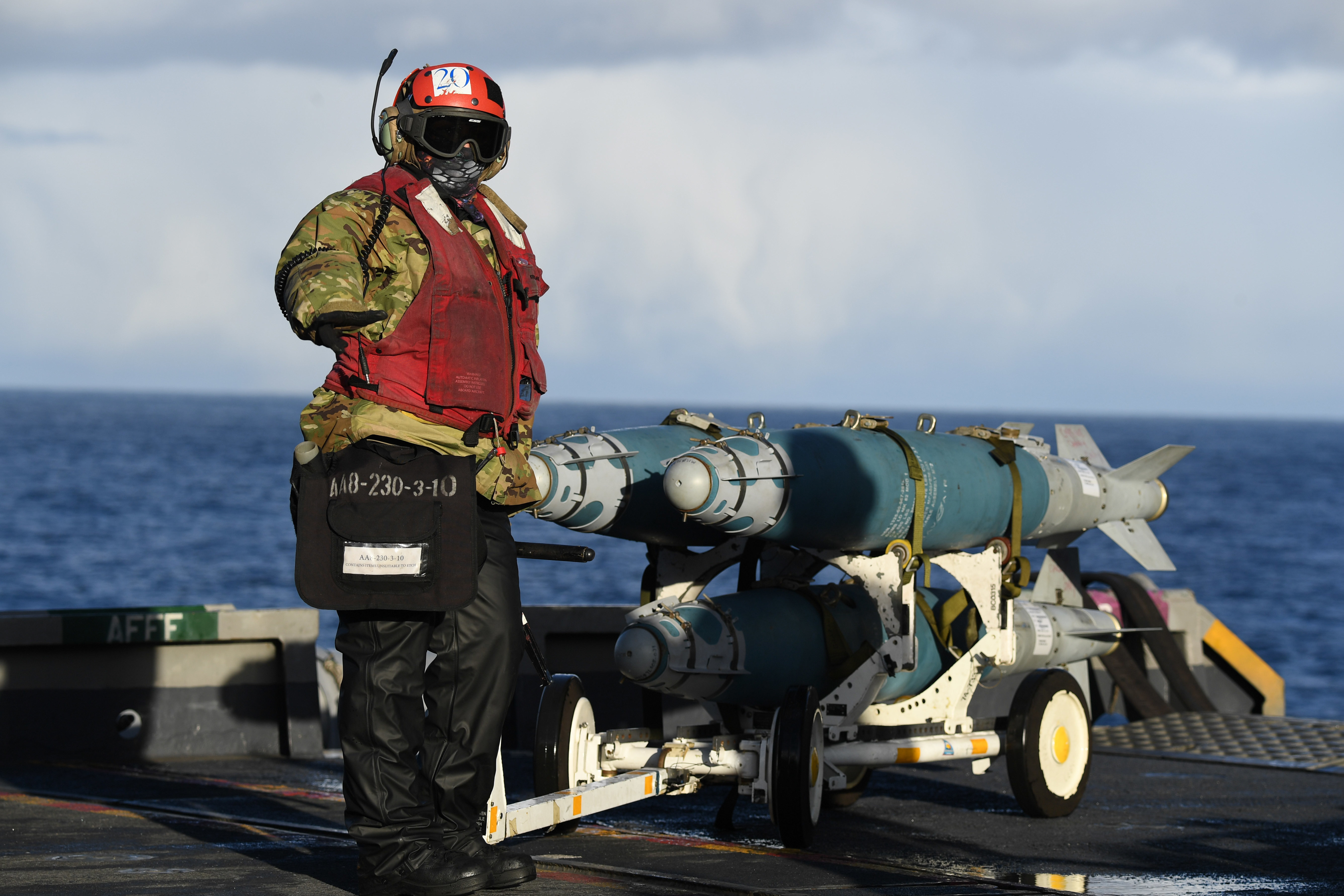 After leaving Naval Station Norfolk in April and returning in late July for a working port visit, the Truman CSG should be returning home later this year for the end of its official deployment phase. Whereas in July “we came back in working uniform and we got to work, this time we’re going to have the whole homecoming with Santa Claus and the band and the radio station, and all the good stuff that comes with that,” Black said.

Once Truman enters the sustainment phase, the strike group’s job will be to fix up the ships as needed and keep their skills sharp as the surge force, in case the Navy’s application of dynamic force employment requires them to head overseas again.

Black said the working port visit “was pretty remarkable in that we got an excellent material reset and were back out, but there’s a number of bigger jobs that have got to get done when we get back, and then we’ll be right back to it ready to deploy. We’ll do some sustainment-type exercises, some other things, but we will maintain our ability to deploy whenever CNO calls me and tells me to go.”

Dienna noted that dynamic force employment inherently requires a hefty investment from the Navy to create and sustain strike groups that can conduct any mission at any location to keep potential adversaries on their heels.

“I can tell you we are in phenomenal shape as we look to that sustainment phase. We’ve had both execution and training opportunities beyond what I think any of us anticipated. From a material standpoint, we’re doing phenomenally and we have some opportunities in the sustainment phase not simply to sustain our readiness if we’d be required to subsequently serve, but to even improve on the baseline where we’re at right now and focus on more high-end capability,” Dienna said. 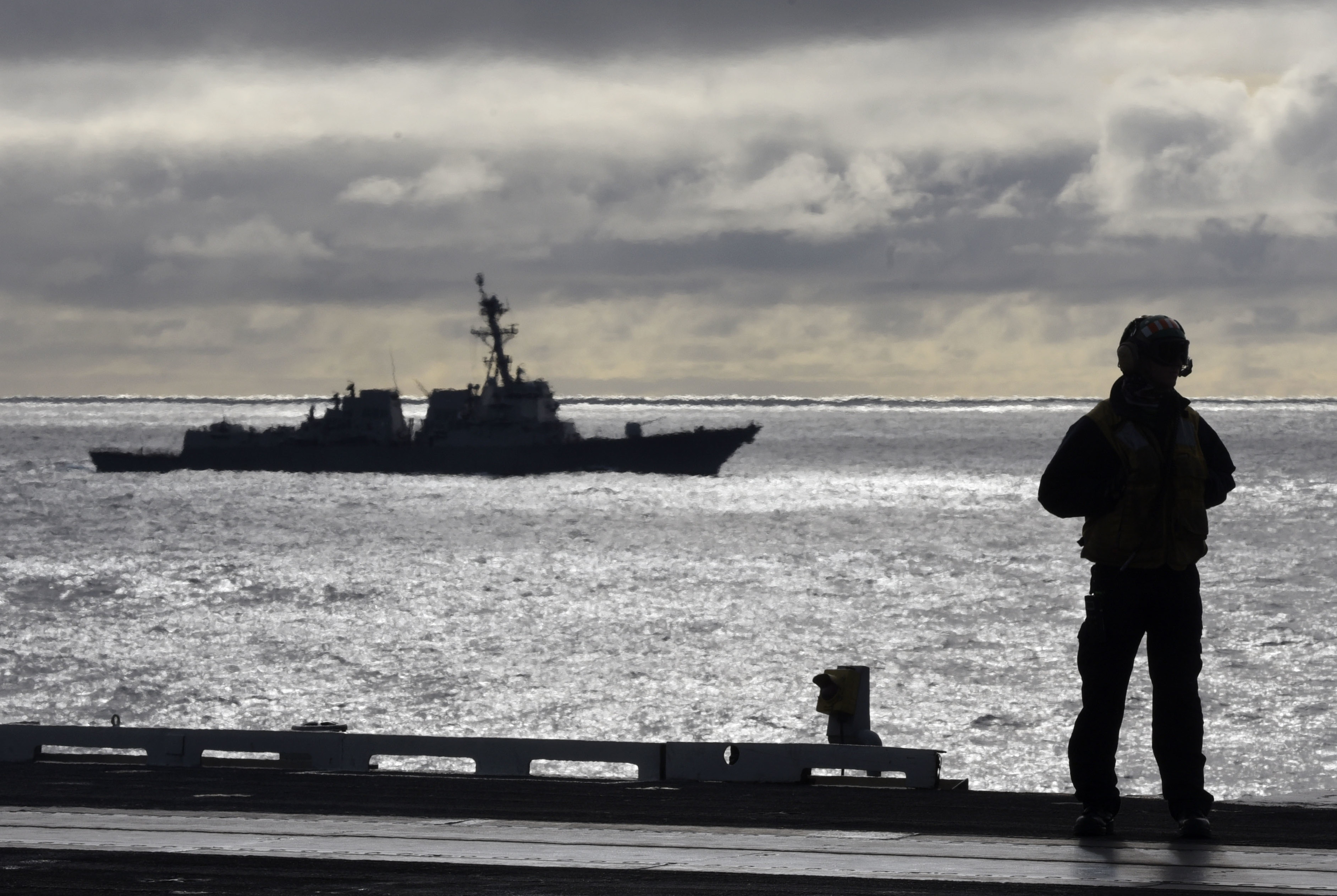 A sailor stands on the flight deck during flight operations aboard the Nimitz-class aircraft carrier USS Harry S. Truman (CVN-75) in the North Atlantic on Sept. 18, 2018. US Navy Photo

Richardson acknowledged Dienna’s point and said “we’ve got to commit at my level to making sure that the sustainment phase is properly resourced, that the strike group and each of the ships and the sailors have what they need in terms of materiel and funding, fuel, everything they need to maintain that level of readiness through the sustainment phase. So we’ll do that.”

Master Chief Petty Officer of the Navy Russell Smith added during the call that the Navy was committed to keeping the strike group fully manned during the sustainment phase in case the group were to deploy again.

Richardson concluded by saying “this is a higher level of demand for the entire Navy – we’re upping our game.” He said he was pushing the fleet to operate at the high end of warfare – “much more sophisticated technologically, operationally, really across the entire spectrum of maritime operations and warfighting.”

He praised sailors for rising to the occasion and “being more creative, coming up with solutions that we never would have thought of to pretty vexing problems. Morale is up. Retention is up.”