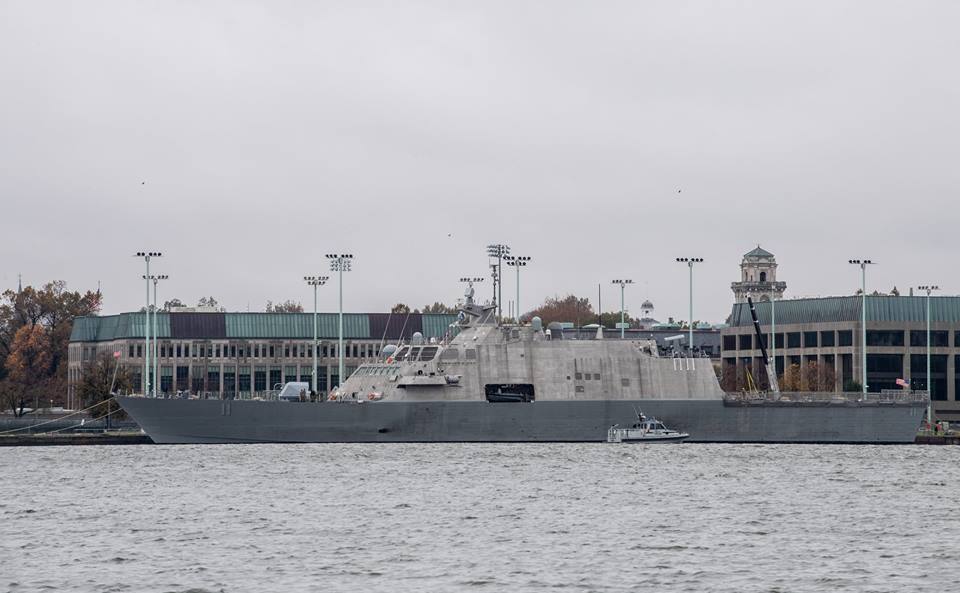 The future USS Sioux City (LCS -11) is moored at U.S. Naval Academy for a commissioning scheduled for Saturday, the first such ceremony held for a warship on the Severn River.

For shipbuilder Lockheed Martin, the commissioning provides a ready example of how production line improvements at the Fincantieri Marinette Marine facility in Marinette, Wisc., are paying off.

“LCS-11 was the first ship to get through the modernized yard,” Joe DePietro, Lockheed Martin’s vice president of Small Combatants and Ship Systems said during a media briefing this week. “We laid two keels this year, and delivered two ships, and will launch two ships this year, so we really hit our stride.”

Sioux City is the 13th littoral combat ship to enter the fleet and is the sixth Freedom-class variant. In August, Lockheed Martin also delivered the 14th LCS, the future USS Wichita (LCS-13). Both ships are expected to be homeported in Jacksonville, Fla.

One of the hallmarks of the LCS program is the relatively small crew size. Sioux City will start with a crew of about 70 officers and enlisted personnel, but the ship has berthing for up to 98 sailors, DePietro said. The purpose of adding crew accommodations was to allow Navy personnel to take care of more maintenance while underway.

The ship sends more than 80,000 signals to about 10,000 sensors, all with the goal of helping the smaller crews better manage the parts or components requiring replacement, DePietro said.

“Let’s not just do maintenance for the sake of maintenance,” DePeitro said. “Let’s understand the condition of the system to drive us to do that maintenance.”

Other examples of automation include being able to control the ship’s speed from a single console, instead of having to call to engineering to adjust speed. The LCS combat systems combine some functions to accommodate combat control teams of 5 to 8 sailors. On a destroyer or cruiser, DePietro said teams of 20 or more sailors typically run the combat systems. Cutting crew sizes, he explained, is one of the critical factors to cutting the cost of operating the LCS program.

“At the end of the day, the LCS is still getting delivered and delivered at a cost that’s under the Congressionally mandated cost cap that was set,” DePietro said.