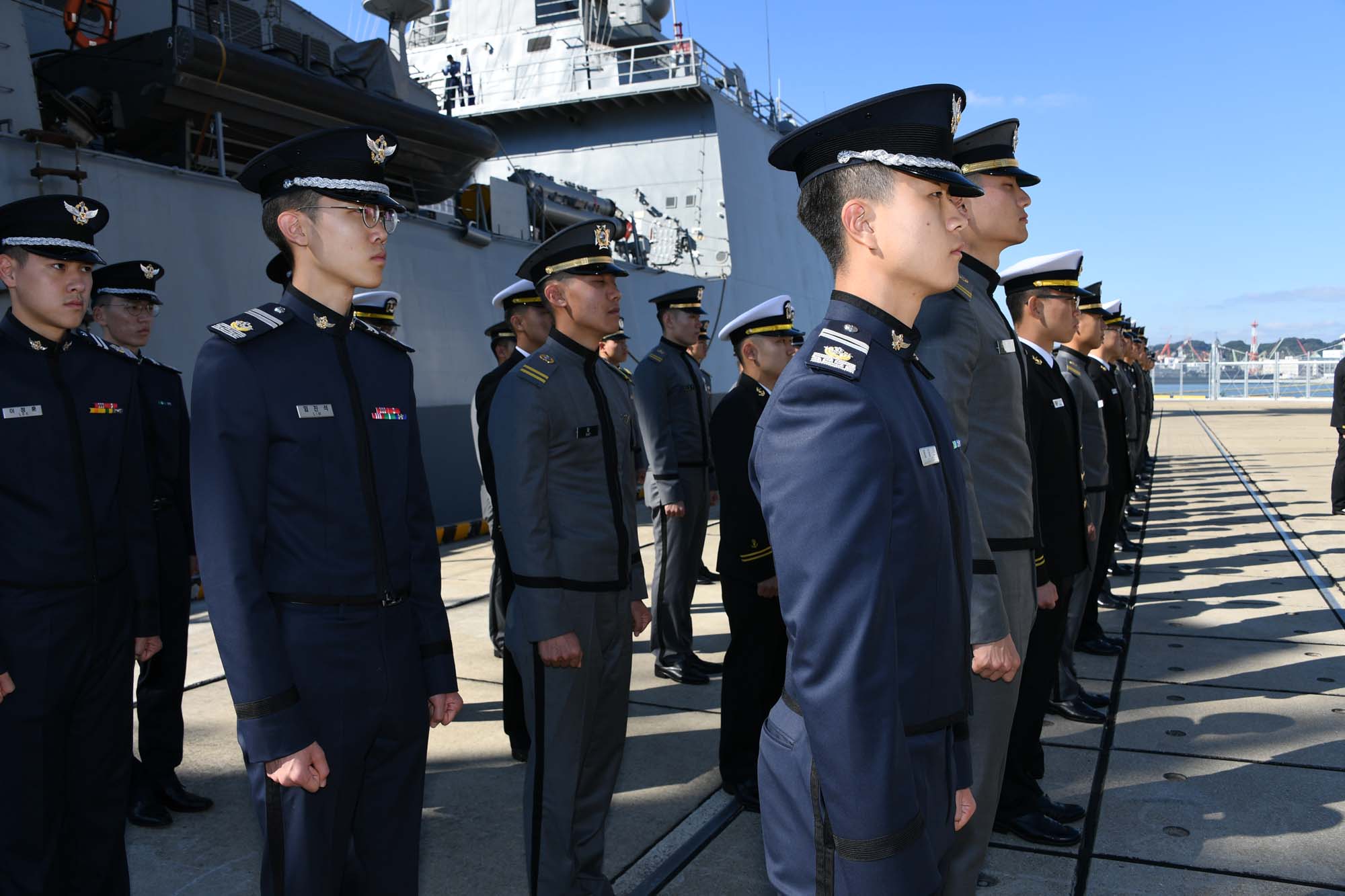 Midshipmen and cadets from the Republic of Korea Navy, Army and Air Force academies during a visit to Commander Fleet Activities Sasebo. JMSDF Photo

This post has been updated to correct the type of ships the Korean Navy sent and to include additional information from the U.S. Navy.

Three Korean warships and about 600 cadets from the Republic of Korea Navy are in Sasebo, Japan, for an important port visit between the two Pacific navies.

This is the first time in more than a decade that a Korean ship has pulled into port in Sasebo, according to a U.S. Navy news release.

The visit, which runs through Thursday, includes a welcoming ceremony, an overview of the JMSDF to the ROK cadets, a courtesy call between ROKN Cruise Training Task Group commander Rear Adm. Lee Sung-Ryol and Commandant of Region District Sasebo Vice Adm. Satoshi Kikuchi, tours of Japan’s ground and air self defense forces, and an exchange between the ROK cadets and the JMSDF midshipmen, according to Cmdr. Masa Yokoyama, a spokesman for the Japan Maritime Staff Office.

“For Japan, ROK is the most important neighboring country, which shares strategic interests, and is extremely vital to Japan in geopolitical terms,” he told USNI News.
“In addition, the two countries share many strategic interests as allies of the U.S. Therefore, even if difficult issues occasionally arise, close collaboration between the two countries on the security front has enormous significance for the peace and stability of the Asia-Pacific Ocean.” 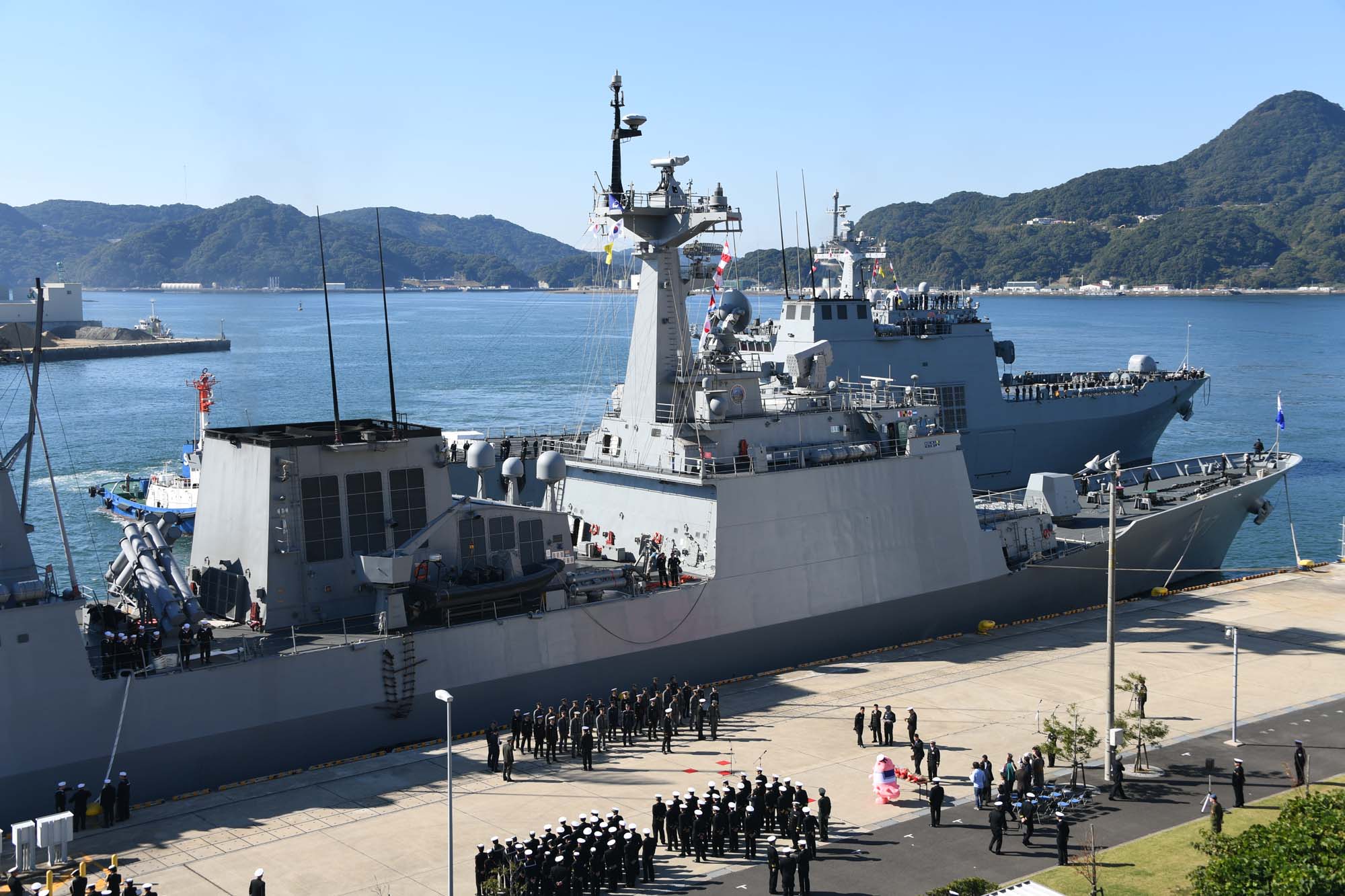 “Both Japan and ROK confront wide-ranging and complex security challenges including not only the nuclear and missile issue of North Korea, but also maritime security,” he continued.
“In order for two countries to deal effectively with such security challenges, it’s important to carry out not just exchanges for increasing mutual understanding and trust-building but also more broad-ranging and concrete defense cooperation.”

The Korean sailors will also visit amphibious assault ship USS Wasp (LHD-1) and American personnel forward-deployed to Sasebo. Rear Adm. Brad Cooper, commander of the amphibious force in U.S. 7th Fleet, said in a statement that “it is always wonderful to spend time with our great friends from the Korean Navy and the Japanese Maritime Self Defense Force (JMSDF). This is a special visit by the Korean Navy here to Sasebo and we are thankful to join with shipmates from both countries during the visit. We are also honored to host Korean cadets on USS WASP as part of their visit here and look forward to serving alongside the bright young men and women serving in the militaries of both nations for many years to come.”

Nick Szechenyi, a senior fellow at the Center for Strategic and International Studies and deputy director of the Japan Chair there, told USNI News that the visit itself – and the inclusion of students from both Korea and Japan – is a positive sign that the two nations are serious about strengthening their defense relationship.

Szechenyi said there are historical tensions and territorial disputes between the two, but both acknowledge on a strategic level that they need to cooperate on defense issues such as the nuclear threat from North Korea and uncertainties about China’s intentions in the region.

“A prominent theme in Japan-South Korea relations is the development of a future-oriented relationship,” he said, noting that in the last ASEAN ministers meeting, a bilateral talk between the two countries’ defense ministers led to an acknowledgment of the value of additional port visits and naval cooperation.

In having hundreds of students from both countries coming together, “this type of exchange, looking towards the future, is an important step” for Korean-Japanese ties, Szechenyi said.

From the U.S. perspective, he said the trilateral relationship is “critical to maintaining peace and stability in the region,” but he noted that every triangle is dependent on two-sided connections as well, and seeing a strong Korean-Japanese relationship benefits the U.S. Issues like interoperability of systems and information-sharing are happening at a trilateral level but also at bilateral levels between the U.S., Japan and Korea and need to continue to ensure a strong defense alliance in the Pacific, he noted.