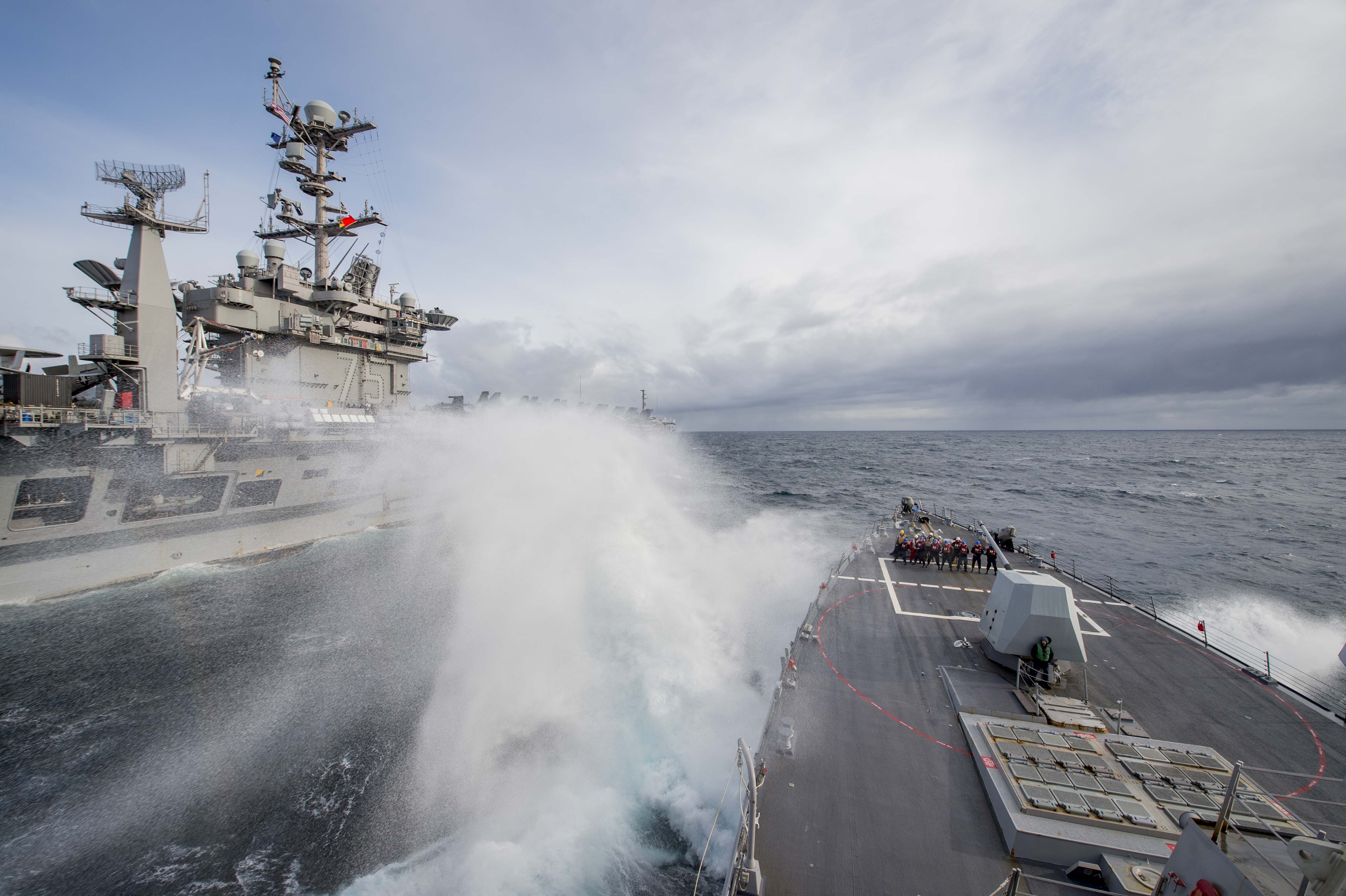 Operating in the Arctic didn’t stop the Harry S. Truman Carrier Strike Group from conducting flight operations or surface and undersea warfare missions, but it did force leadership to focus on the logistics that kept those ships running.

Though the aircraft carrier was well suited to handle the heavy seas of the North Atlantic and Norwegian Sea, the cruiser and destroyers escorting USS Harry S. Truman (CVN-75) were limited in their ability to operate in extreme conditions, and the logistics ships that bring fuel and dry cargo were even more limited, according to strike group commander Rear Adm. Gene Black, who spoke to USNI News today from aboard Truman.

“Essentially it was a question of which weather windows could support us getting alongside the logistics ships. Because of the distances, they were covering, sometimes the two to three days of decent weather wouldn’t allow them to come up. But we had planned for that,” he said, and the carrier brought extra supplies with it in case there were longer-than-usual gaps between resupplies at sea. Black said the strike group had a few good underway replenishments and saw no operational impact from the challenges of getting the supply ships up to such high latitudes. 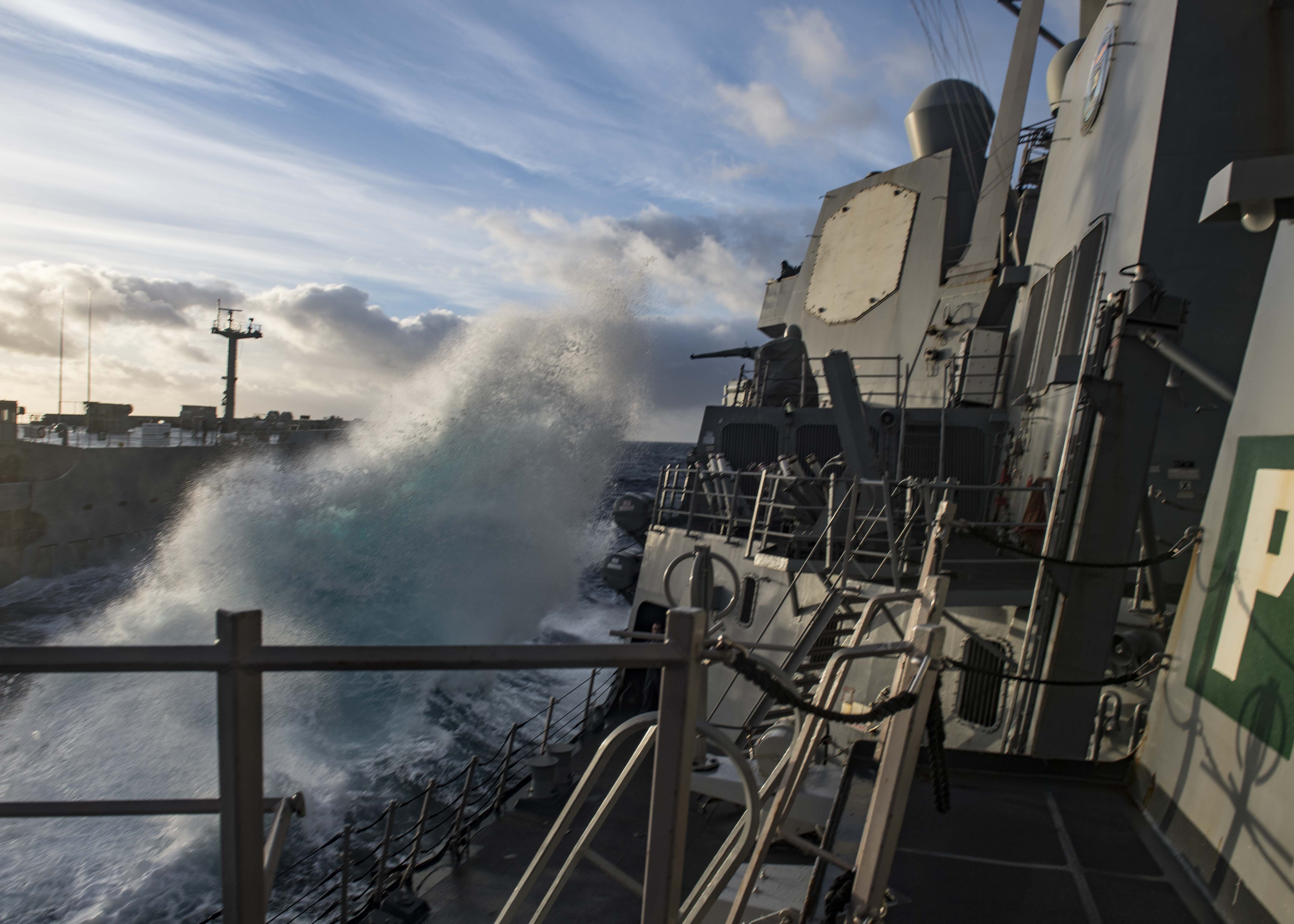 As a lesson learned he would pass along to the next strike group commander operating in that region – which hasn’t been done since the early 1990s – Black said, “you’ve got to be agile, and when you see a weather window, an opportunity to rendezvous to take fuel, you need to grab it.”

“You’ve got to know when it’s time to head for shelter or to get out of the way of a storm. We ended up leaving Trident Juncture a little bit earlier than we would have wanted to, but we had a storm with 30-foot-plus seas coming and that’s not a good day at sea for anybody,” he continued when asked about lessons learned.
“Start talking about secure-for-sea, and start talking about being prepared for the cold well in advance. The more you talk about it, the more folks go and check and double check, the less likely you are to have anything get thrown around by the heavy seas and something gets damaged or hurt, which is something we were quite well prepared for and I was very pleased with that.”

Black noted that he had to give careful consideration to the weather and “be very mindful of the size of the seas, because while the carrier can easily operate in bigger seas, we need to be careful of the cruiser and destroyers, that we don’t unintentionally beat them up – because the motion on them is obviously, being a fraction of the tonnage of the carrier, significantly greater.” 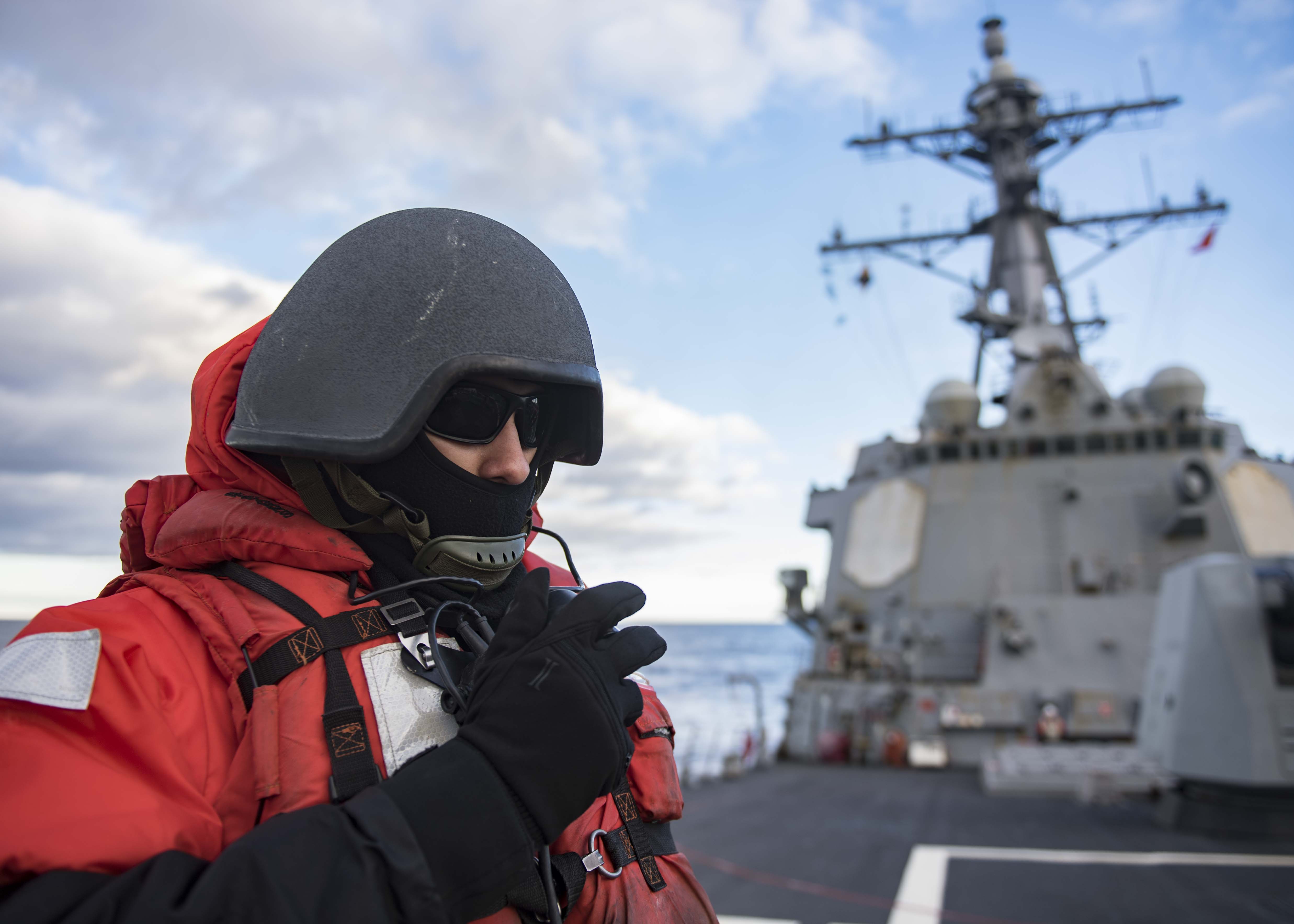 Fire Controlman 2nd Class Noah Diaz acts as a phone talker aboard the guided-missile destroyer USS Forrest Sherman (DDG 98) during an underway replenishment in the North Sea on Oct. 30, 2018. US Navy photo.

As far as personnel goes, though, he noted the operations in the Arctic Circle were more grueling on the carrier, whose flight deck personnel might be launching and recovering planes for 12 to 15 hours a day in icy conditions.

“Operating a carrier in more northern latitudes presents some obvious challenges. There were extremes of environmental conditions – higher sea states, higher wind conditions and significantly colder temperatures than we had nominally operated in and trained on over the last really three decades or so,” Truman commanding officer Capt. Nick Dienna told USNI News in the same interview.
“We spent a lot of time planning for it, we spent a significant amount of time procuring specific gear, and also specific capacity and things like lubricants for much of our equipment (to optimize them for the cold weather). But at the end of the day, carrier operations are carrier operations, flight operations are flight operations, and while certainly in those environmental extremes we need to be cognizant of potential impacts and we need to be a little bit more methodical, quite frankly this ship was built to operate in those environments, and we operated here regularly in the mid- to late-80s and into the 90s. In many ways it was simply regaining our proficiency in those environments and then learning as we go, and I’m incredibly proud of the efforts of our sailors operating on a day-to-day basis in what I would argue is perhaps the most unforgiving environment that we operate in as an aircraft carrier.” 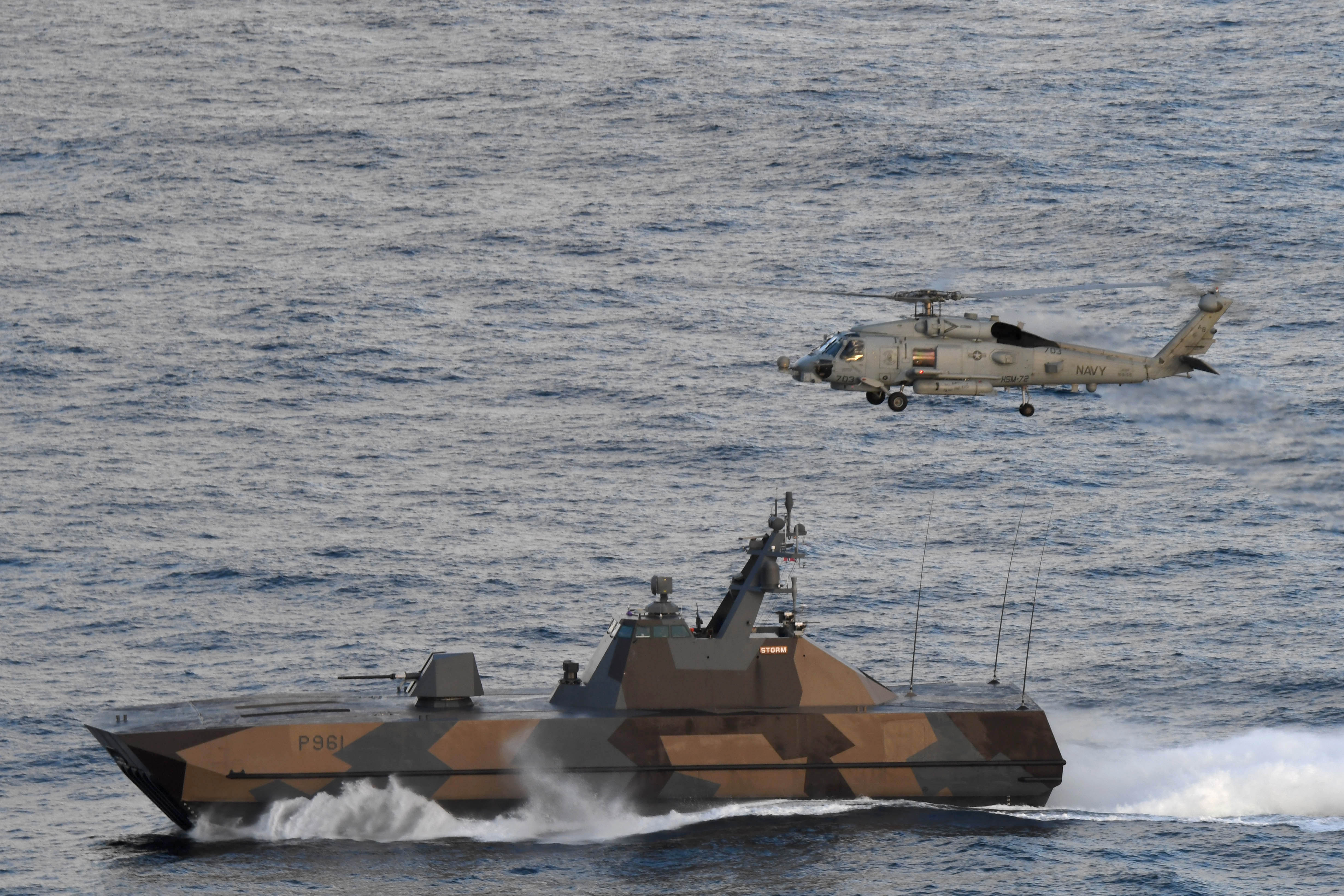 The Harry S. Truman Carrier Strike Group sailed into the Arctic Circle on Oct. 19 and spent about two weeks operating there – conducting flight operations on its own before joining with Norwegian military forces in the Vestfjorden region and then participating in Trident Juncture 2018, the largest NATO exercise in years.

“Our support to Trident Juncture reflects NATO’s foundation of partnerships, cooperation and preserving lasting peace, and provided our strike group an invaluable opportunity to work closely with our NATO allies and partners – to learn from them on their home turf, or home waters, enhance our capabilities and become stronger together as we work toward mutual goals,” Black said.
“Over the past several months, in every area we’ve operated, I have relied on the skills, the capabilities and the dedication of a team of teams within the strike group. Our presence here in the eastern Atlantic Ocean, and previously in the North Atlantic around Iceland, the North Sea, in the Norwegian Sea, and then north of the Arctic Circle, demonstrates to our allies and partners that we will uphold our commitments, regardless of the vastness or the unforgiving nature of the sea. The practices we refine and the lessons we learn from this historic deployment will benefit those who follow Truman for years to come.”

Both Dienna and Black said participating in Trident Juncture and operating in the Arctic Circle were rewarding experiences for them and their crew.

“I think the biggest thing for me was one day when we operated in the fjords in company with multiple Norwegian ships, conducted flight operations in that environment fully integrated with our Norwegian partners after only a couple of days of being up there. The seamless way that we were able to, primarily through the efforts of the Norwegians, to be able to conduct full-spectrum operations in probably the most challenging area I’ve ever operated in was simply extraordinary, and I know everybody onboard is taking a lot of pride in that effort,” Dienna said.

Black agreed, adding, “the Norwegians went out of their way to partner with us: we got access to their ranges, our helicopters operated with their SEALs, our small ships operated with theirs, one of their frigates joined my carrier strike group and operated with every bit of the intensity and professionalism of one of our ships. And it was an absolute highlight that we could show up, never having operated together, and come together and operate at the highest level and in one of the most demanding environments that we could face.”