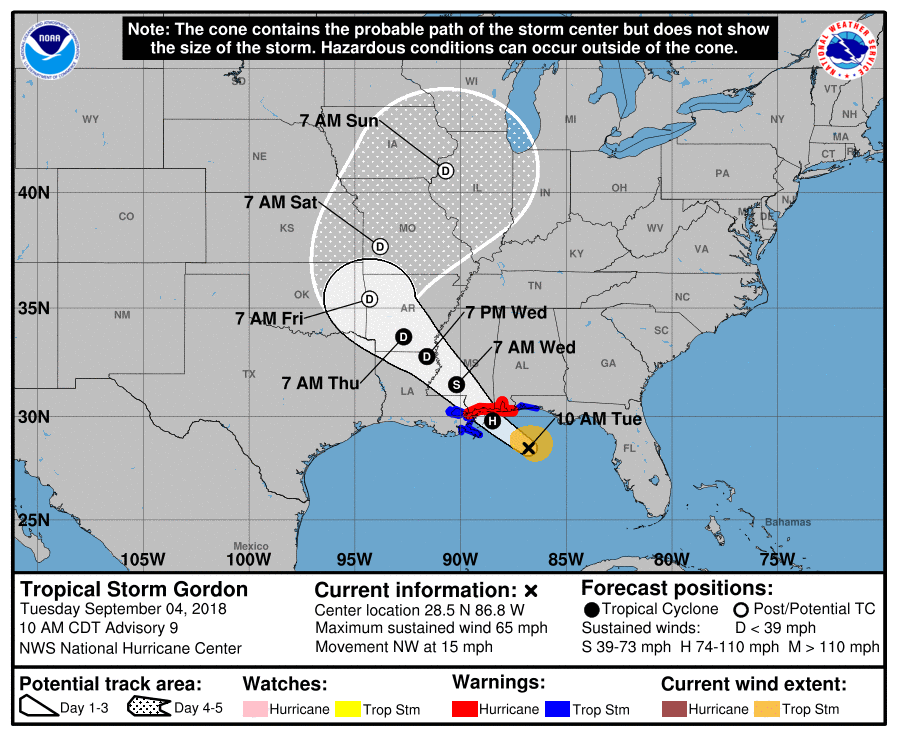 As Tropical Storm Gordon approached the north-central Gulf Coast over the Labor Day weekend, Navy commands and shipbuilders in the region are tracking the storm’s progress but do not expect major disruptions.

Local shipyards along the Alabama-Mississippi coast prepared for the oncoming storm by securing equipment and halting work for the day. The National Hurricane Center predicts Gordon will achieve hurricane strength before making landfall. To be classified as a hurricane, a storm must have sustained winds of at least 74 mph at its center. At 3 p.m., the hurricane center reported Gordon’s center had a sustained wind speed of 65 mph.

The Austal USA operation in Mobile, Ala., prepared for Gordon by securing its 164-acre facility, but did not require moving ships, a company spokesperson told USNI News. The Austal yard builds both the Independence-variant of the Littoral Combat Ship and the Expeditionary Fast Transport.

As of noon Tuesday, Naval Construction Battalion Center Gulfport, the home of Atlantic Fleet Seabees, was the closest Navy base to the expected storm track. The base started operating at Tropical Cyclone Condition of Readiness 3, which meant destructive winds were likely to hit the base within 48 hours, according to the base Facebook page.

Non-mission essential personnel were allowed to leave the base starting at 11 a.m. and various base operations including the RV park, commissary and exchange closed early, according to the base Facebook page.

As of Tuesday afternoon, the Navy did not plan to relocate aircraft, based on the latest predicted storm track, Bill Dougherty, spokesman for Navy Region Southeast, told USNI News.

During last year’s active hurricane season, units from Navy Region Southeast provided disaster assistance to Puerto Rico and the U.S. Virgin Islands, even as some of their own bases in Texas and Florida were in the storms’ path.

“We’re well practiced in the things we need to do after last year,” Dougherty said.