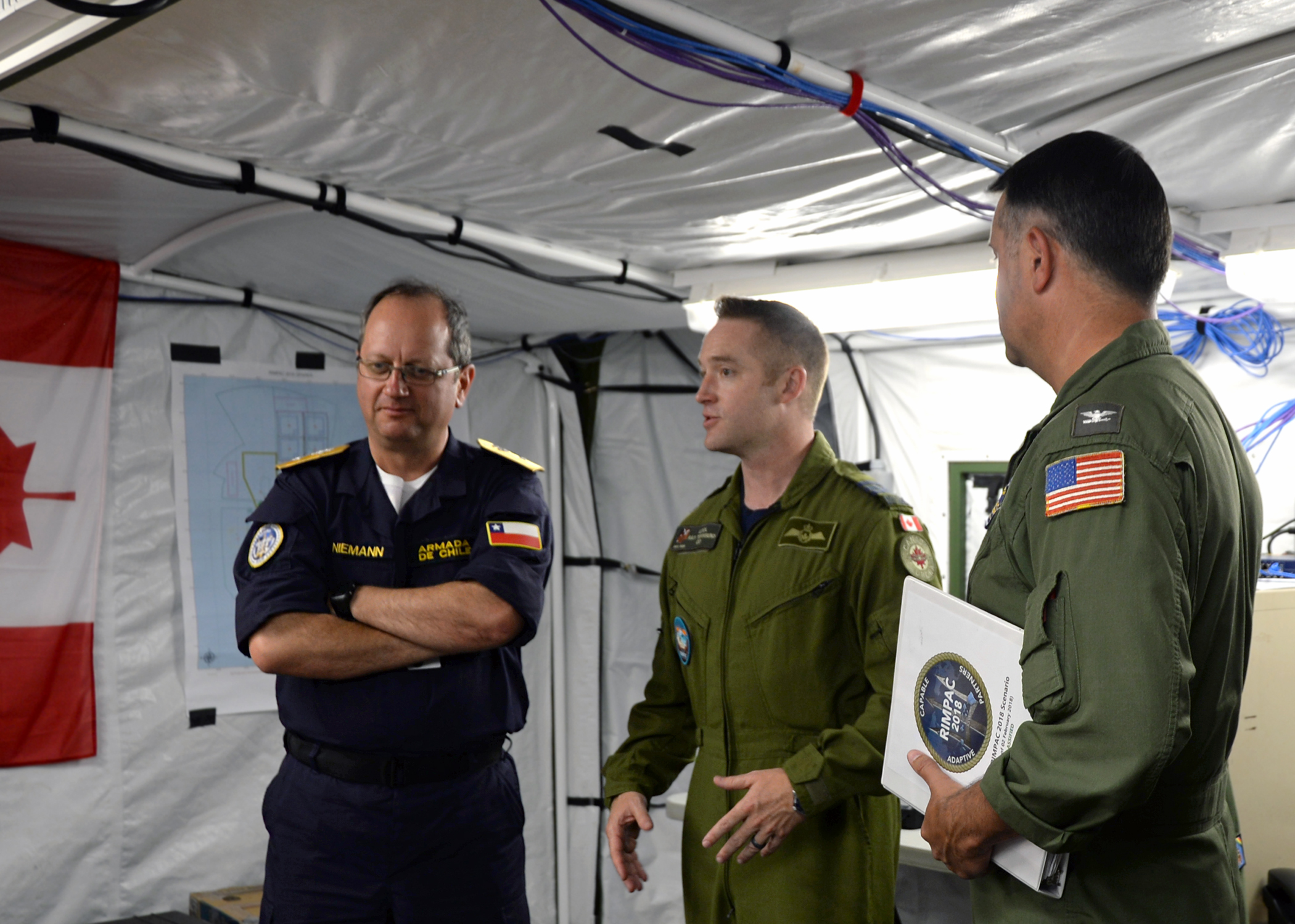 JOINT BASE PEARL HARBOR-HICKAM, HAWAII – Chile’s unlikely rise to leadership at the Rim of the Pacific biennial international exercise has allowed its naval officers to bring back an array of lessons learned to the Armada de Chile, which deals with a unique set of challenges.

Armada de Chile’s Commodore Pablo Niemann Figari served as the RIMPAC 2018 combined forces maritime component commander (CFMCC), marking the first time a component commander was selected from a non-founding member of RIMPAC: the United States, Canada and Australia. That Chile of all countries might be the first non-founding member to achieve this status is perhaps surprising – Chile is one of just two South American countries to send a ship to Hawaii for RIMPAC. But the Armada de Chile’s Cinderella story is one of perseverance, having now joined in for 12 of the 26 iterations of the exercise and beginning to take on staff and leadership roles since 2012. 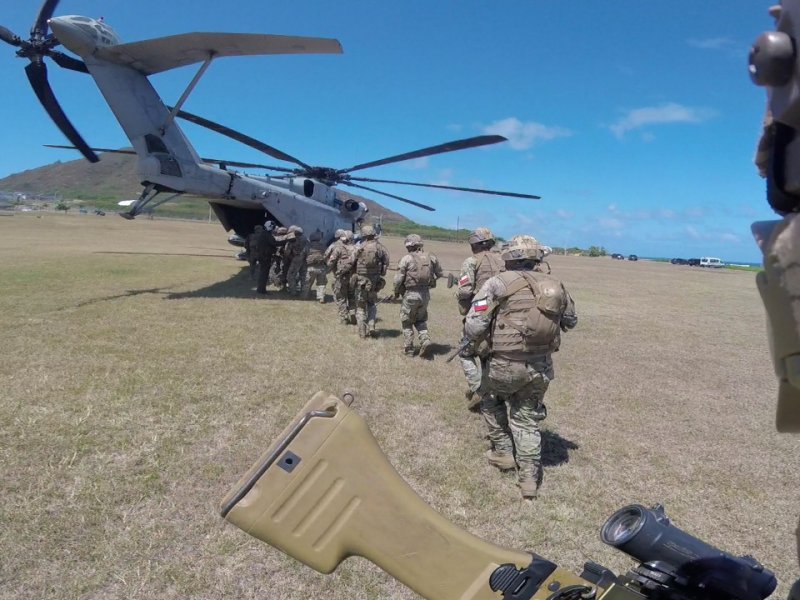 More than 300 Chilean sailors participated in the Rim of the Pacific 2018 exercise, and for the first time a squad of marines participated too to have a chance to work alongside and learn from U.S. Marines. Chilean Navy photo.

Niemann said Chile’s navy faces some unique challenges: the navy is small and the country’s coastline is incredibly long, distributing the force to cover all 4,000 miles of shoreline; the navy is relied upon to ensure maritime safety as well as to support the country’s economic development and prosperity; and few opportunities exist close by to participate in a major multilateral high-end exercise.

Niemann said he and his navy have jumped at the opportunity to take on larger roles at RIMPAC and learn all they can. The navy had previously sent a frigate, or sometimes a frigate and a submarine, to the exercise each time. Beginning in 2012, Chile also sent personnel to serve on the CFMCC staff – as sea combat commander in 2014, as deputy CFMCC in 2014 and 2016, and as CFMCC this year.

“RIMPAC is a very broad exercise in terms of the possibilities that it gives you to train actively at the unit level, to be part of a bigger group as a task group, and from another perspective at the operational level of war it gives you the opportunity to be part of a staff where you have to plan and execute the operational or the tactical activities which occur at sea,” he told USNI News in a July 20 interview.
“So with the ship we gain tactical experience in this great scenario and this great opportunity at sea, and ashore as part of the staff we get a lot of insights and experience in terms of planning and execution in a battle rhythm with a very big staff.” 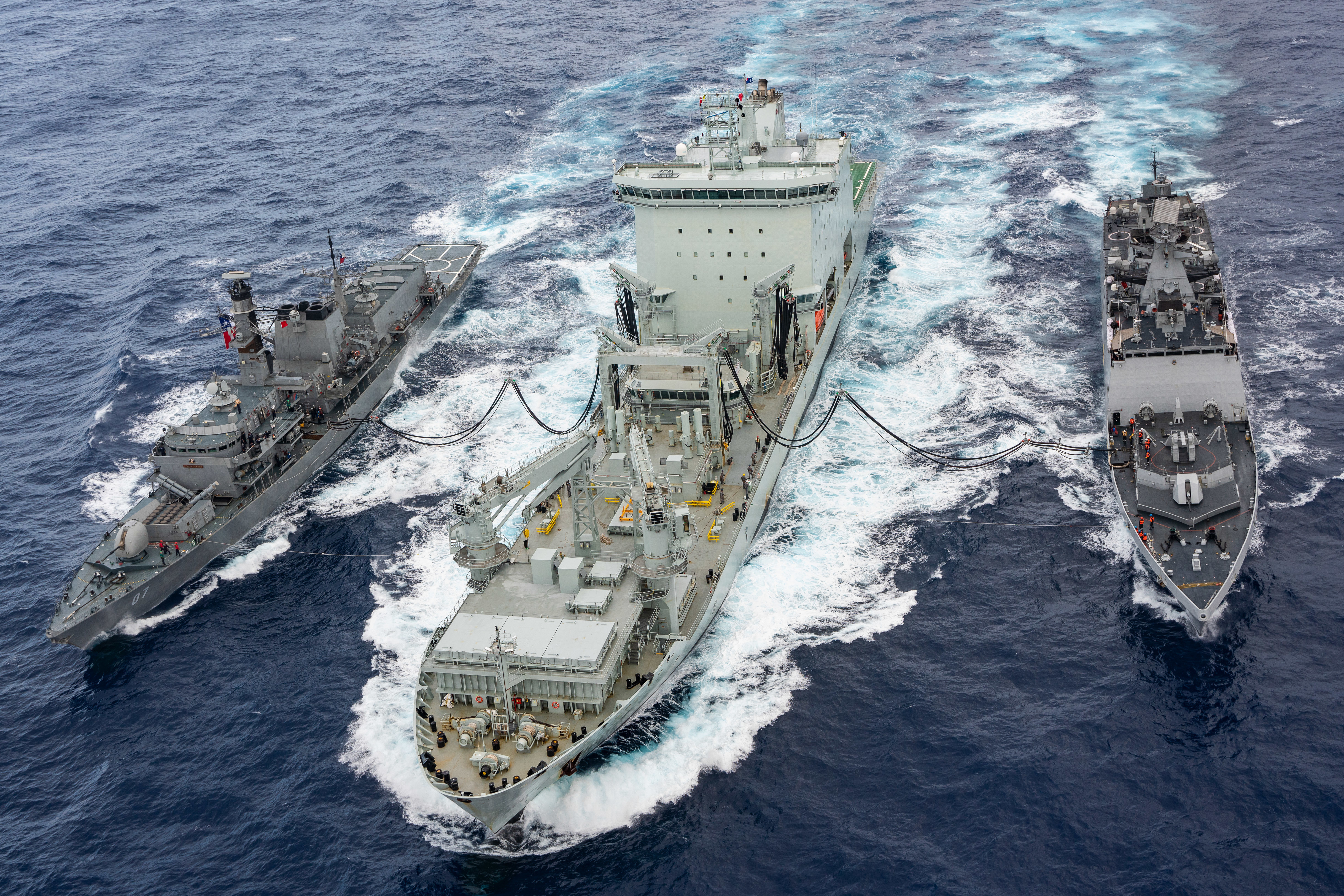 Personally, Niemann said he has enjoyed rising through the leadership and taking away something new from the exercise each time. His first time attending the exercise was in 2002, when he served as a principle warfare officer on a ship and said he learned a lot but from the more narrow ship-level perspective.

“My second participation was in 2004 as part of the staff of 3rd Fleet, I came over and participated in the staff, so I had another view of how things are run for the exercise in terms of planning and the execution from the exercise control point of view. In ‘16 I did the deputy job last RIMPAC, so that provided me a new view from a much broader perspective in terms of the whole exercise, from [humanitarian assistance/disaster relief] all the way through maritime security operations, mine countermeasures operations, and also the high-end of kinetic operations in case of a conflict. So it’s been a learning experience for me, my involvement in RIMPAC. And of course it has given me the possibility to bring that knowledge back to my country and to, I would say, generate some changes in terms of how we do things back home to our size and to our needs.”

One important example of a lesson learned at RIMPAC that has shaped Armada de Chile operations is the concept of a Maritime Operations Center (MOC). Though scaled to meet Chile’s needs, Niemann said he learned during RIMPAC that the MOC “works in a very good process or method, which is the cross-functionality of different key members of a staff in order to resolve problems, military problems, and bring them to execution in the operations. We didn’t have that; maybe three or four years ago we started implementing that system in our headquarters, so that’s a big change for our navy. It allows you to better design operations and better control them during the execution.”