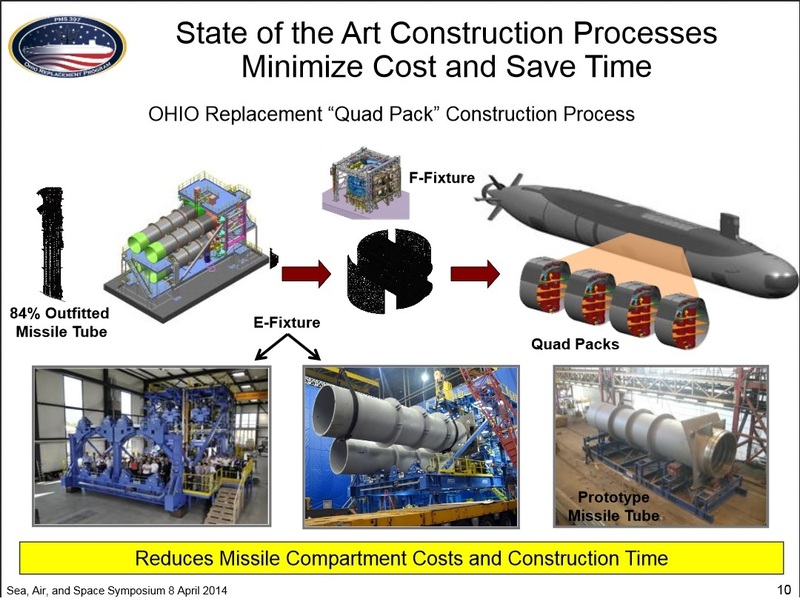 General Dynamics Electric Boat and the Navy are evaluating the potential of missile tube welding issues identified by a subcontractor to delay construction of the first Columbia-class submarines, the next block of Virginia-class submarines and for the British Dreadnought-class submarines.

An Electric Boat subcontractor — BWX Technologies — identified problems with welded components for missile tubes destined for the new submarines, Rex Geveden, BWX chief executive said on a Tuesday conference call with Wall Street analysts. BWX is one of three vendor making the missile tubes for the Common Missile Compartment. His team is working closely with the Navy and Electric Boat teams.

“In the welding process we normally inspect the welds periodically and make weld repairs and the inspection technique didn’t detect those issues, so there will be repair work that has to be done,” Geveden.

Lynchburg, Va. —based BWX has a long history providing propulsion and other components to the Navy. As a segment of Babcock & Wilcox Co., BWX made components for the Navy’s first nuclear-powered submarine USS Nautilus (SSN-571) and for the Nimitz-class carriers. In 2015, Babcock & Wilcox spun off its government contracting business to create BWX, according to the company’s history.

“The Navy purposely planned for early construction of the Common Missile Compartment including missile tubes and first article quad pack, to mitigate risks such as these, and construction start for Columbia remains on schedule in FY2021. The Navy is working closely with the UK to evaluate impacts to Dreadnought,” read the NAVSEA statement.

As for what the missile tube issue means for BWX’s, Geveden said it was too early to tell exactly what the rework would mean for its earnings, and the Navy’s next missile tube contract award was not scheduled to occur until early in 2019.

“We don’t see this having a material impact on this area of the business,” Geveden said.

BWX Technologies, Inc. (BWXT), a subcontractor to General Dynamics Electric Boat (GDEB), identified a welding issue on subcontracted missile tubes that have been delivered to GDEB for use in the U.S. Columbia and UK Dreadnought SSBN programs and payload tubes being manufactured for the Virginia-class SSN program.

The issue concerned non-destructive testing (NDT) affecting BWXT missile tubes and payload tubes. The Navy/GDEB team is working to bound the scope of the problem and engineering assessments are ongoing to assess and determine remediation for the identified issues. BWXT is one of three vendors providing missile tubes for the Columbia/Dreadnought programs and one of two vendors for the Virginia program. All BWXT welding requiring volumetric inspection has been halted until the investigation is complete. Initial reports indicate that the other vendors do not have the same issue, and they continue to produce missile and payload tubes.

Some of the affected BWXT missile tubes have been delivered to the builder’s yard and are in various stages of outfitting but have not been installed on any submarines. The Navy is closely overseeing GDEB’s efforts to define, scope, and mitigate any potential impact to the schedule of all programs. The Navy is working aggressively with the shipbuilder to mitigate any resulting schedule impacts associated with resolution of this issue, and working with the UK to ensure commitments made under the Polaris sales agreement are met.

The U.S. Navy and the submarine force have a long tradition of safety and quality and will take the time necessary to ensure Columbia, Virginia and components for the UK Dreadnought are constructed to the highest standards. Safety is central to the culture of our entire Navy submarine community, including designers, builders, maintainers, and operators. The SUBSAFE program infuses the submarine Navy with safety requirements of uniformity, clarity, focus, and accountability. The Navy purposely planned for early construction of the Common Missile Compartment including missile tubes and first article quad pack, to mitigate risks such as these, and construction start for Columbia remains on schedule in FY2021. The Navy is working closely with the UK to evaluate impacts to Dreadnought.

The Navy has not formally accepted delivery of the missile tubes, as they will ultimately be accepted prior to shipment to the UK or at USS Columbia delivery.

The Navy is assessing the potential impact to schedules for the Virginia-class submarines with the Virginia Payload Module (SSN 803 and future ships, beginning in Block V).

BWXT is under contract with GDEB for 26 missile tubes and three Virginia Payload Module (VPM) payload tubes, which are in various stages of completion.

Seven of the affected BWXT missile tubes have been delivered to the builder’s yard and are in various stages of outfitting prior to installing the tubes into the submarine hull. Other missile tubes in progress at BWXT (five total) are also in question. The Virginia Payload Tubes are in the manufacturing process at BWXT. The Navy and GDEB are currently in the process of determining next steps (further inspections, re-work/replacement, etc.).

Impacts to the delivery of missile tubes to the UK will be assessed upon completion of GDEB’s efforts to define and scope next steps.