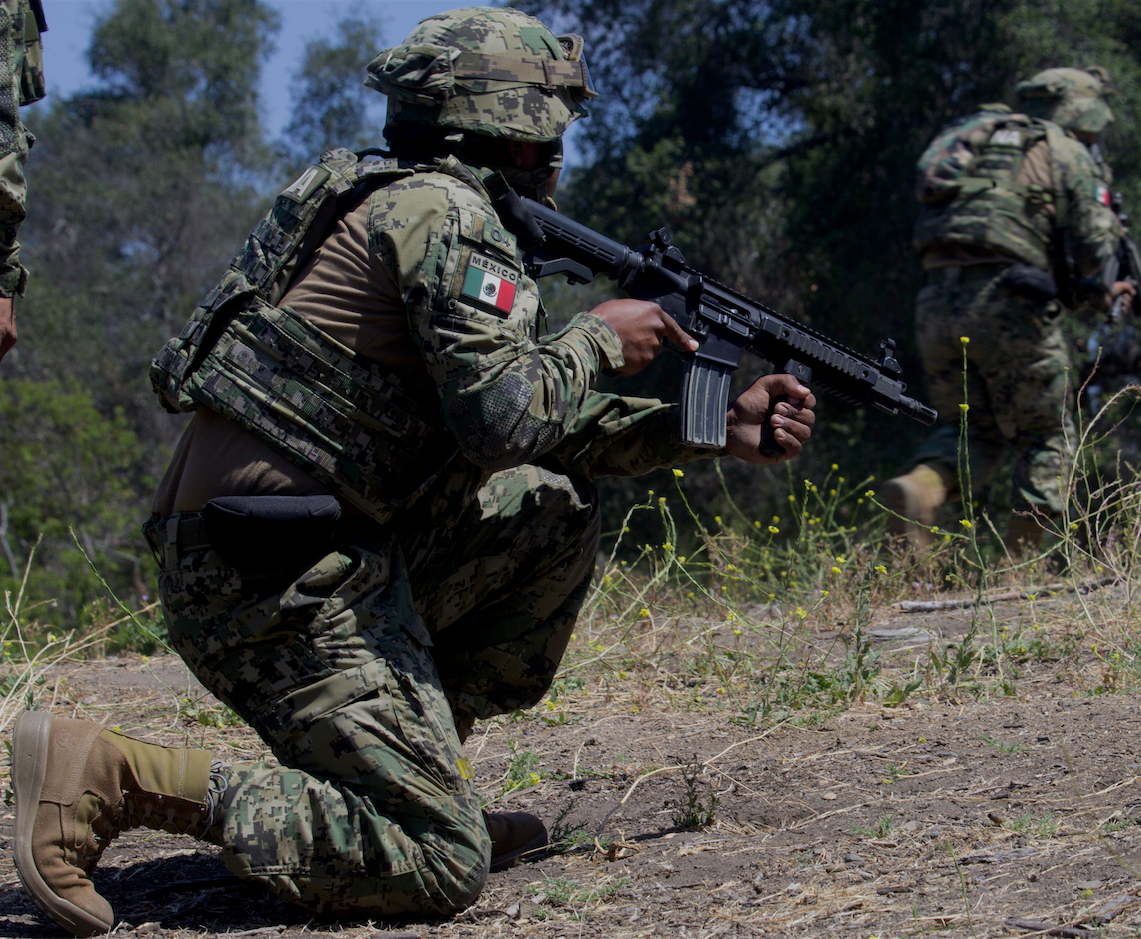 CAMP PENDLETON, Calif. – The squad of Mexican marines stepped deliberately through a narrow alley, their rifles scanning windows and roofs for any potential danger. The village seemed calm, with some local residents milling along the market street amid the occasional sounds of bleating goats.

But the blast from an improvised explosive device near the patrol broke the calm, and the Mexican force joined by several U.S. Marines for the security mission were soon under gunfire from unknown shooters in what looked like a coordinated attack.

The Mexican Marines, as well as an infantry force with the Royal Canadian Army, joined Marines with the 15th Marine Expeditionary Unit for a variety of interoperability and scenario-based training during the Southern California portion of RIMPAC 2018.

The IIT is a sprawling, urban operations training complex designed with several state-of-the-art simulations technologies, which with role players are meant to provide realistic environments for platoon and squad-sized units to sharpen tactical skills and small-unit decision-making.

In the scenario for RIMPAC, each of the dozen Mexican squads on a security patrol through a village would encounter a threat from an enemy or opposition force while conducting a humanitarian assistance or disaster response, or HADR, mission.

The squad, integrated with several U.S. Marines, performed a bit better against the local threat than a smaller team that had preceded it on a run through the scenario of a security patrol. That group of Mexican marines exposed themselves to the enemy shooter several times as they sought to identify the threat and set up defensive fires before reinforcements arrived. Throughout, and before leaving to evacuate a wounded marine, they shooed away a local elderly man wounded in the roadside blast.

Still, for Mexican marines tuned more to the counter-drug fight against violent, ruthless cartels right at home than HADR missions that tend more toward civilian care, the squads seemed to relish the immersive experience training alongside the U.S. Marines.

But they’d have to react to blasts from IEDs that can maim or kill them – and any innocent local civilians they’re supposed to help or protect – and from danger from shooters or snipers. “It’s all free-thinking. We don’t know what the marines are exactly going to do, so we’ve got to manipulate our scenarios to their actions,” Bert Thielen, the IIT site manager, said Monday during a media day session to observe the training. “So it’s kind of like a chess game.” 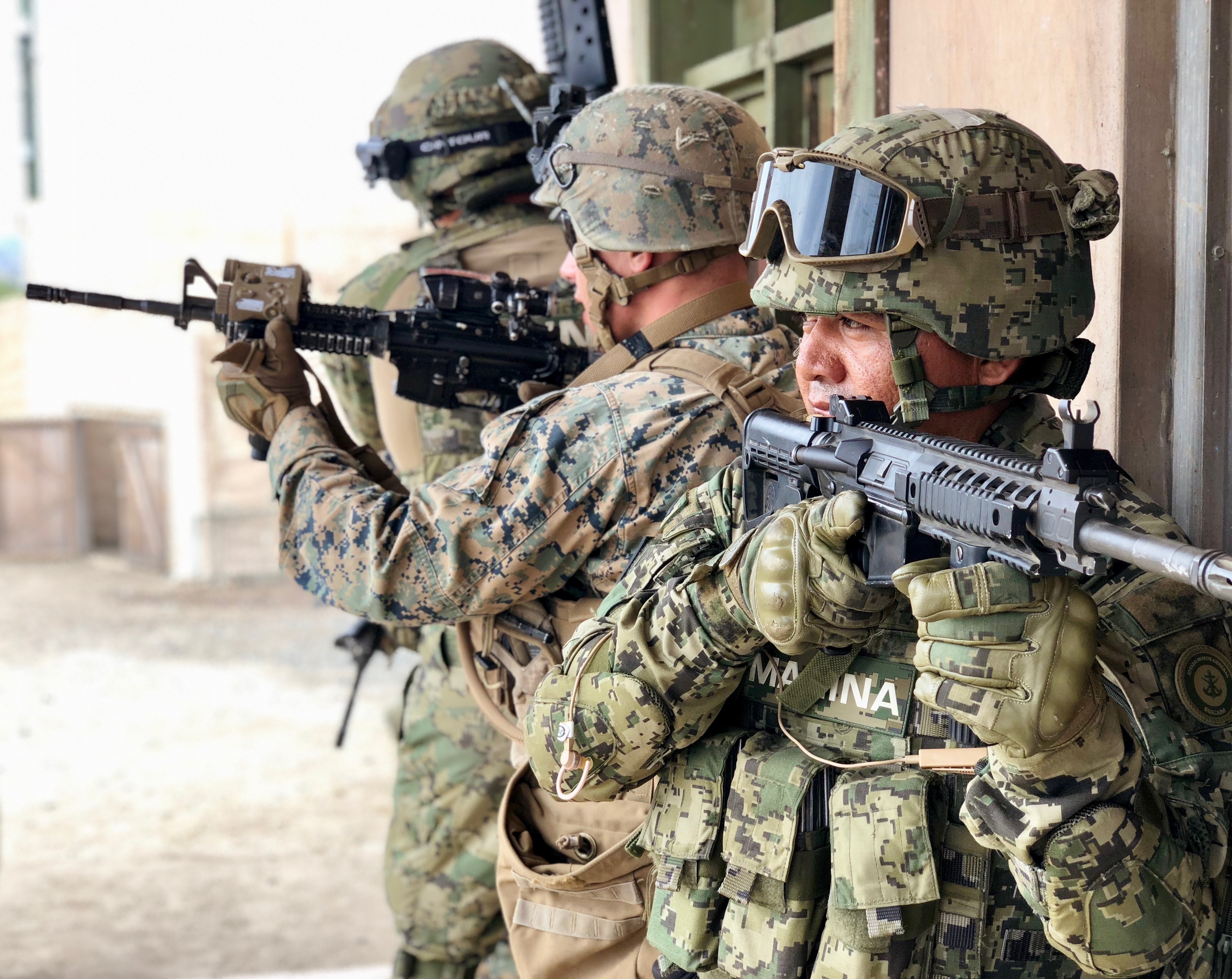 US Marines with 2nd Battalion, 1st Marine Regiment, and Mexican marines assigned to the Amphibious Marine Infantry Brigade stand security during an integrated squad exercise with as they navigate the infantry immersion trainer (IIT) during Rim of the Pacific (RIMPAC) exercise at Marine Corps Base Camp Pendleton, California on July 9, 2018. US Marine Corps Photo

It’s the first time the Mexican marines have experienced the IIT and dealt with such HADR scenarios they encountered at the IIT. How they performed, however, matters less than what they got out of it.

At the IIT, that comes through during a 20-minute after-action review, held at a nearby classroom where subject-matter-experts – most are former Marines and contractors – talk with squad leaders and trainers through the scenario. The AAR comes alive from video clips recorded during each unit running through one of the three training lanes at the outdoor range, digital imagery collected from several hundred cameras on buildings and poles across the IIT. (Each AAR is recorded, as well, which the training unit receives.)

Along with their U.S. counterparts, who included a couple of Spanish-speaking U.S. Marines helping translate, the Mexican marines sat or stood around an H-shaped table, their green camouflage uniforms bearing patches stating “MARINA” and images of anchors or tridents, denoting them as naval infantry who fall under the Mexican navy. They listened attentively as the site SME leads them through some highlights, aided with the clips, on some general tactics, techniques and procedures from defensive fire to medical aid. “Both you and I are going to address it to your squad things that we could have done better,” the SME told them. The contractor, Katmai Corp., asked not to use his name.

“What are some of the things you can address with the squads to make it better?” the SME asked the Mexican squad leader. The review goes a bit more abbreviated, in part due to the language gap and lag time with translations to Spanish and to English. “Completely different and very complicated,” the Mexican marine squad leader said when asked how the IIT compares with their training resources back home.

One video clip shows marines bunched up along a wall. “All it would take is one enemy machinegun starting to fire to take the whole stack out,” he said. “So it’s important to have that dispersion.” 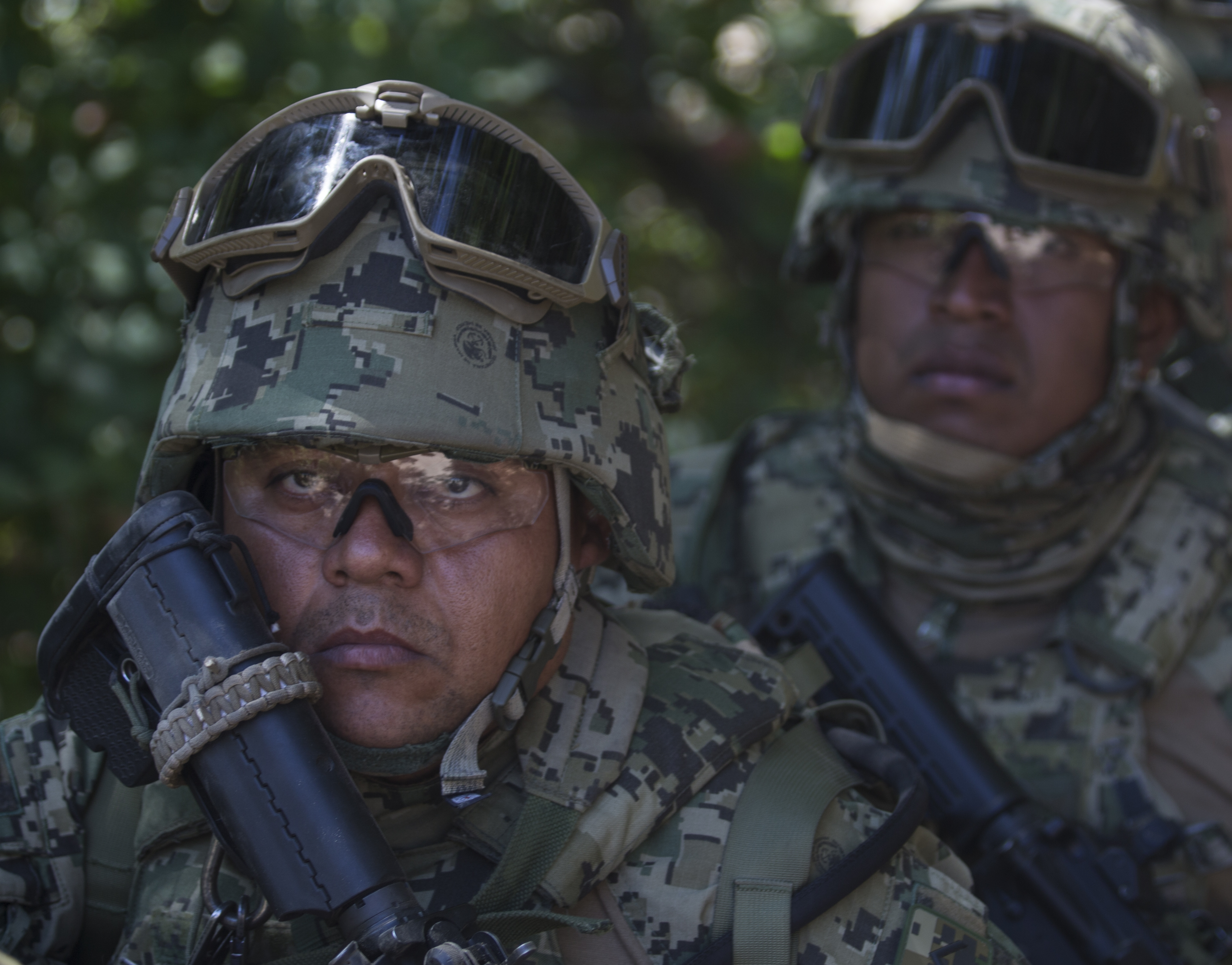 Mexican marines with the Amphibious Marine Infantry Brigade observe the layout and targets during a live-fire drill as part of Rim of the Pacific (RIMPAC) exercise at Marine Corps Base Camp Pendleton, Calif. on July 3, 2018. US Marine Corps

Responding to another question, the Mexican marine squad leader said the squad moved through a courtyard using the walls to hide their movements. “That was a great route selection, using this compound as cover and concealment and to mask your movement headed to the objected, so good job,” the SME told him.

The squad’s approach to the two-story building that housed the gunman included maneuvering through an exterior wall where another IED was hidden inside a stack of tires. A discussion ensured about confirming the existence of an IED, relaying the information to others and cordoning off the area. “How do you deal with the IED itself?” the SME asked. The Mexican marines don’t encounter IEDs as often as, say, Marines have had in places like Iraq or Afghanistan. But the squad’s report would be relayed to an explosive ordnance disposal unit that uses robotic devices to contain any blast.

The marines got kudos from the SME on the covering fire they provided for the four-man assault element that went into the house to take down the gunman, but he reminded them of the need to mitigate the potential risks of IEDs outside and the importance to observe both their immediate space and the area up to 25 meters away. Another clip showed the assault element choked up in a stairwell, which he reminded them left them vulnerable to attack.

The language barrier created some friction points throughout the lane training, with the men relegating to hand signals and broken Spanish to communicate at times, Cpl. Carey Oden, an infantryman with Fox Company’s weapons platoon, said after the AAR. “They train hard. We love to take what they can give us on what they’ve learned, and I know they have learned from us,” Oden said. “I expected them to come in with a professional attitude and learn as much as they could from us, and likewise us from them.”

That training started last month when Mexican marines joined Fox, 2/1 for field training that included interoperability and integrated training at the Kilo-2 combat town, another urban range complex at Camp Pendleton. “They don’t do a lot of security patrolling. They do more of the CQB (close-quarters battle) and they do a lot of raids with their mission sets,” said 2nd Lt. William Thompson, a platoon commander who served as the range safety officer. “Our Marines are pretty versed in patrolling” so they integrated into the Mexican marine squads for the IIT scenarios, “giving them some more firepower.”

“Essentially, we used the same [tatics, techniques and procedures] that they did,” Thompson said. “The Mexican squad had total control in that scenario.”

“They took their time in rehearsals,” he said, adding, “no one was trying to teach them how to do it in real time. It was more like, get the mission done.”

“Tact is a big one when working with each other,” Thompson said. “That’s one of the best parts about this, being able to share with each other best practices without being overly critical in how to do it, because they have a different area of operations and we have different mission sets at times.”

For RIMPAC SOCAL this year, the foreign forces are assigned as Task Force Mexico and Task Force Canada along with the 15th MEU, headed by Col. Jay M. Holtermann. Holtermann, a veteran CH-53 helicopter pilot, took command of the 15th MEU on June 21 after completing an assignment with U.S. Forces Korea.

Holtermann, who observed some of the training Monday, was asked about impact on the training and interoperability among the U.S., Mexico and Canada forces due to the ongoing divisive atmosphere over tariffs, immigration and international treaties. “I don’t think that any of us are going to allow what’s going on in the domestic political realm to interfere with our desire to learn from each other,” he said. 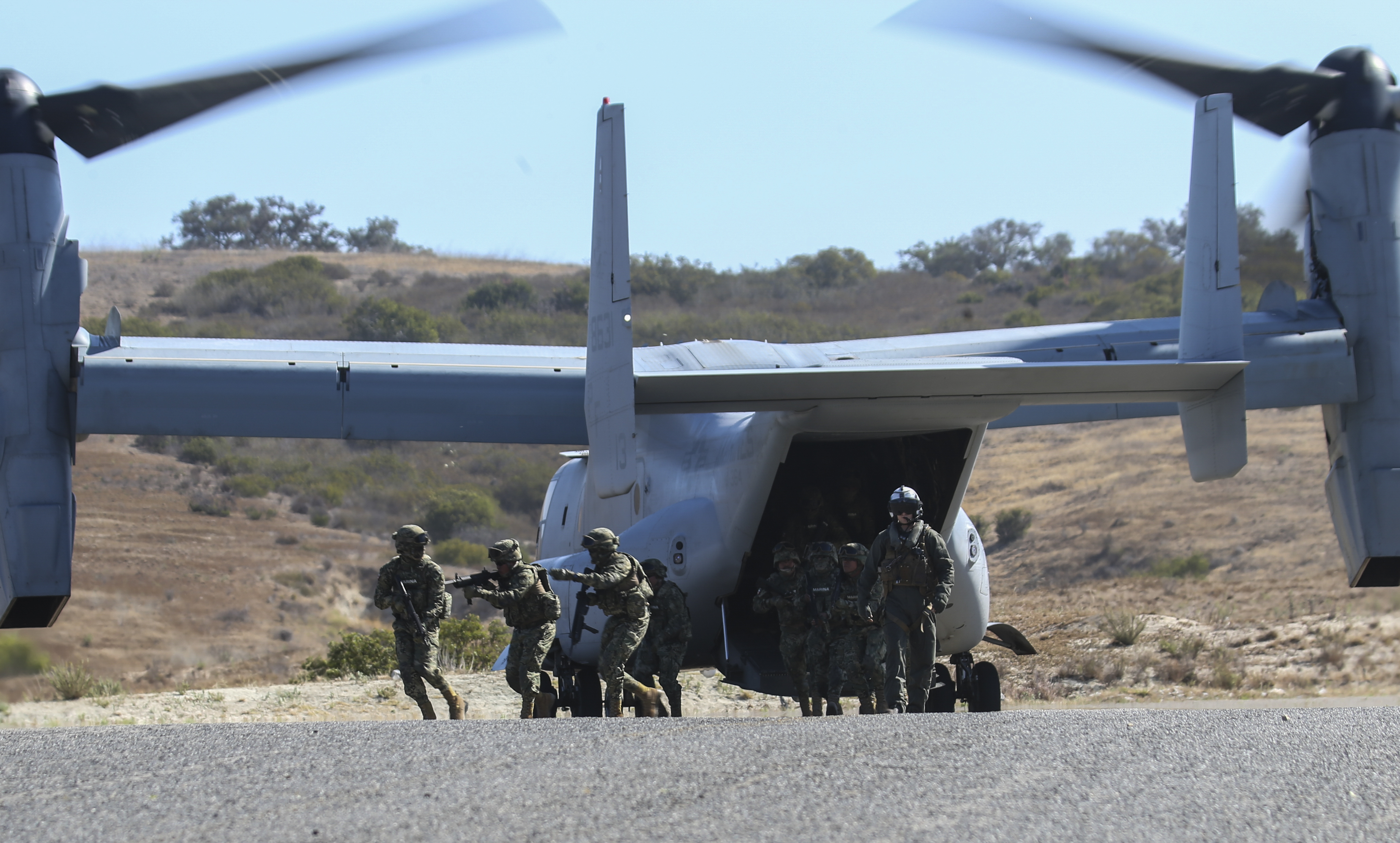 “Everywhere where I’ve toured, the relationships have been extremely strong,” he added. Social events and team-building are “a good way to get to know each other.”

“I think the partnerships have been very strong,” he said.

Along with the IIT urban training, the Mexican and Canadian forces joined Marines for amphibious operations with small boats and amphibious assault vehicles, helicopter operations with the MV-22 Osprey tiltrotor aircraft, and live-fire weapons training and maneuver at several ranges at Camp Pendleton. Task Force Mexico includes the infantry company and about a dozen military medical personnel and officers, with about 140 in all, a spokesman said.

Task Force Canada includes about 170 soldiers with 2nd Battalion, Royal 22e Régiment of the Royal Canadian army, a dismounted infantry unit based in Quebec. They are among more than 1,000 Canadian sailors, soldiers and aviators who are participating in RIMPAC 2018, according to Canada military. These include a team of Canadian explosive ordnance disposal technicians with the Royal Canadian Navy’s Fleet Diving Unit Pacific. The Victoria, British Columbia-based unit joined the U.S. Coast Guard’s Maritime Security Response Team-West from San Diego this year for integrated maritime interdiction operations off Southern California, according to the Navy.

Mexico and Canada are among the 25 nations participating in this year’s iteration of the multinational, biennial RIMPAC exercise held in Hawaii and in Southern California involving about 25,000 personnel, as well as 46 ships, five submarines and 200 aircraft, according to military officials. This year’s RIMPAC runs from June 27 to Aug. 2.