Between 2007 and 2018, the Navy spent $24 billion more than the $182 billion originally planned for shipbuilding, according to the Government Accountability Office’s recently released report, Navy Shipbuilding: Past Performance Provides Valuable Lessons for Future Investments.

However, the Navy’s pace of shipbuilding during the past decade barely kept pace with the rate of decommissioning ships. The Navy’s 283-ship fleet of today is a mere two hulls more than the 281-ships the Navy had at the end of 2006, and is 50 ships shy of the 330-ship fleet the Navy in 2007 predicted would be operating today, according to the report.

“Cost growth has contributed to the erosion of the Navy’s buying power with ship costs exceeding estimates by over $11 billion during this time frame. Additionally, the Navy’s shipbuilding programs have had years of construction delays and, even when the ships eventually reached the fleet, they often fell short of quality and performance expectations,” the report states. 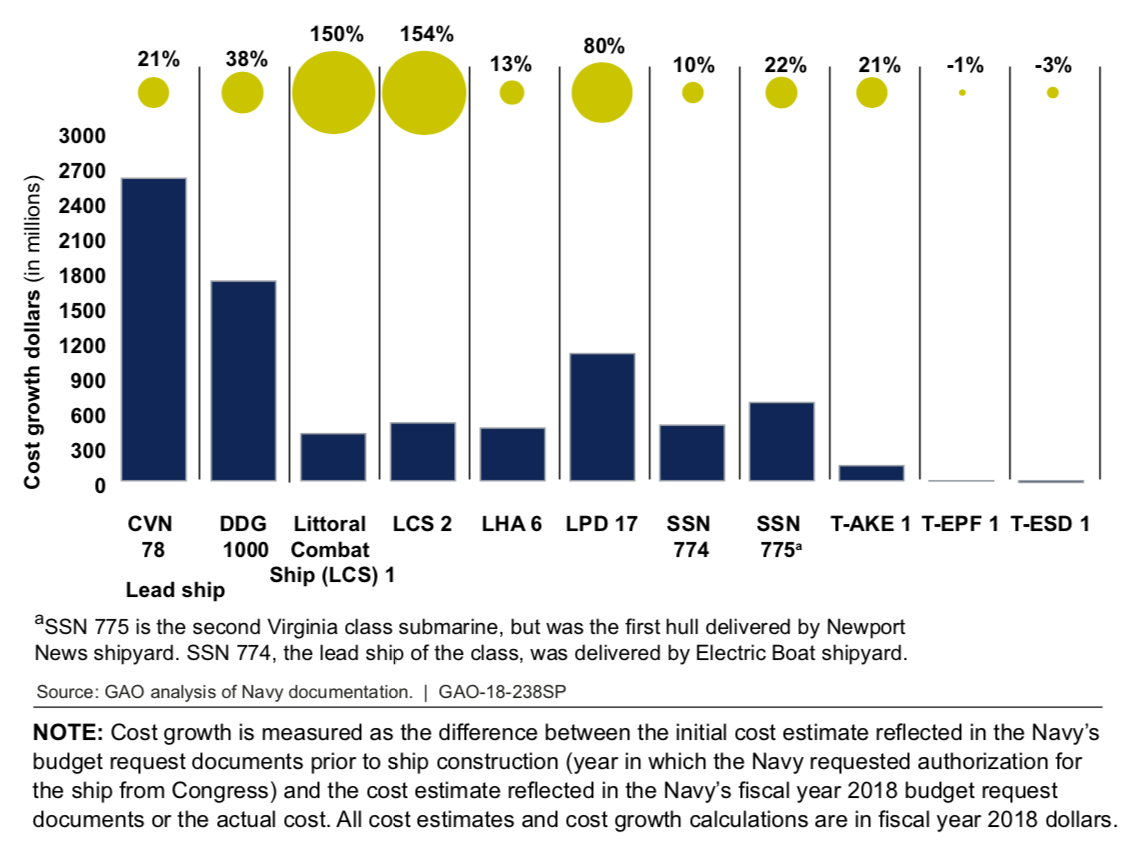 The GAO studied the outcomes of eight first-in-class ship designs and found all were provided to the fleet behind schedule, with four of these ships arriving more than two years late. USS Zumwalt (DDG-1000) was the tardiest, arriving six years behind schedule.

During the past decade, the GAO has issued 26 reports, identified shipbuilding best practices for the Navy to implement, testified before Congress on several occasions, and made 67 recommendations to help the Navy improve its shipbuilding programs. The Navy has implemented 29 of the 67 recommendations. As for the shipbuilding best practices identified by the GAO, in many cases the Navy has agreed with these GAO suggestions but has yet to implement the ideas, the report states. 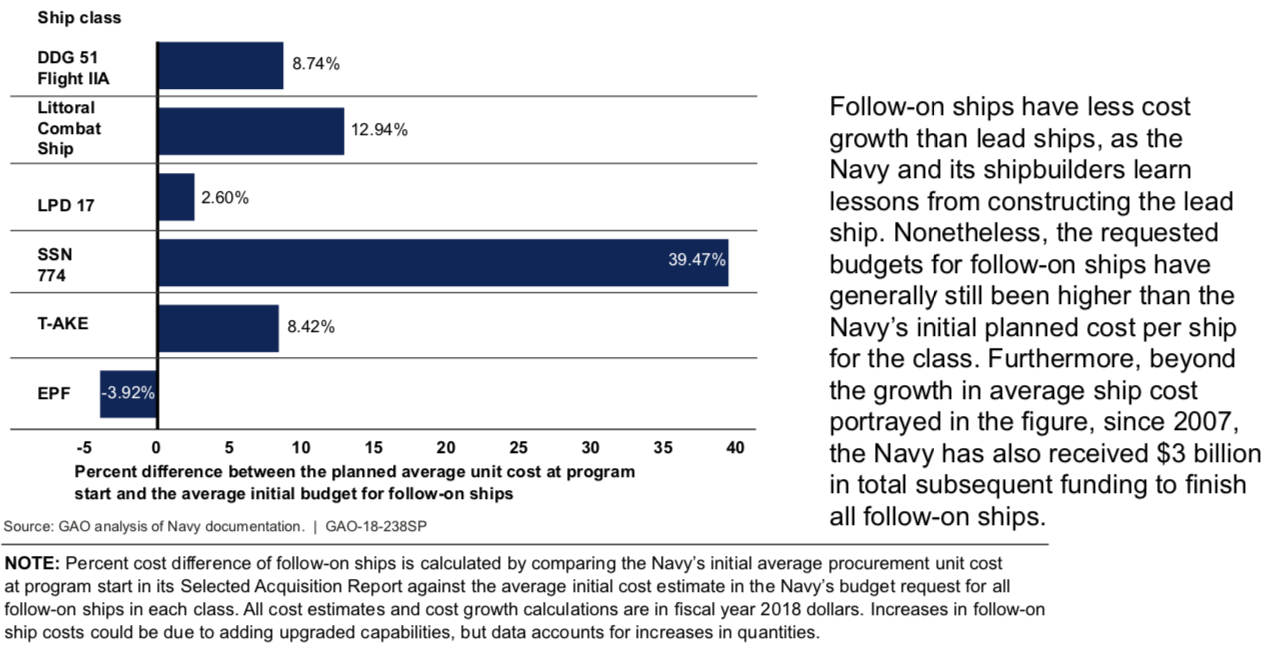 The GAO found the Navy’s anticipated cost-savings were often overly optimistic. Construction delays due to the Navy changing requirements caused costs to increase. The Navy practice of accepting delivery of ships with significant deficiencies also drove up costs because these ships required extensive work, and more money, before being deemed combat-ready.

In the case of the first-in-class USS Gerald R. Ford (CVN-78), the GAO report found the Navy’s original cost and schedule estimates did not fully account for the risks associated with building a first-in-class ship using new technology, nor did the Navy account for how long new technologies would take to install. The Navy even under-calculated the amount of labor needed to build the ship, estimating fewer labor hours than required for the last two Nimitz-class carriers, the GAO states. 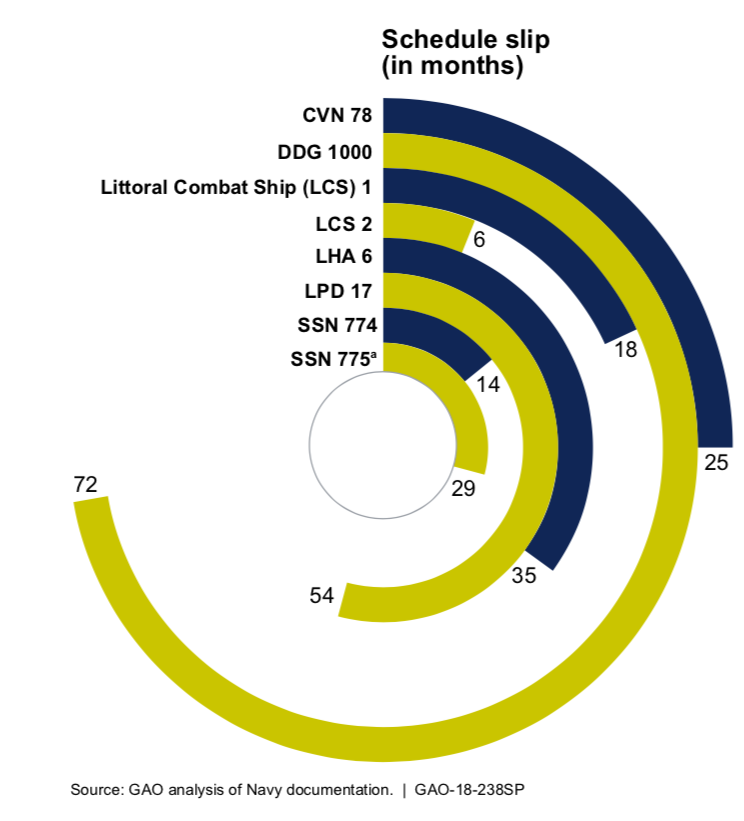 “The Navy took delivery of CVN-78 in May 2017, but the carrier will not be ready to deploy until 2022 as significant development, construction, and testing continues,” the GAO report states.

While cost-overruns are an expected part of building a first-in-class ship, the GAO report found follow-on ships in several classes also cost more than originally expected. In the case of Ford-class carriers, the GAO report states, “Costs for CVN-79 are likely to exceed the $11.4 billion estimate.”

A more disciplined approach to shipbuilding will help control costs in the future, the GAO report states. Suggestions include aligning achievable capabilities with available funding and allowing new technologies to mature before incorporating them into ship programs.

Despite all the recommendations, the GAO does not consider the Navy’s current shipbuilding plans to have changed much from the past.

“Though the Navy has started to make some improvements, its current approach to shipbuilding leaves it at risk of continually losing buying power and jeopardizes its ability to achieve its long-range shipbuilding goals,” the GAO report states.