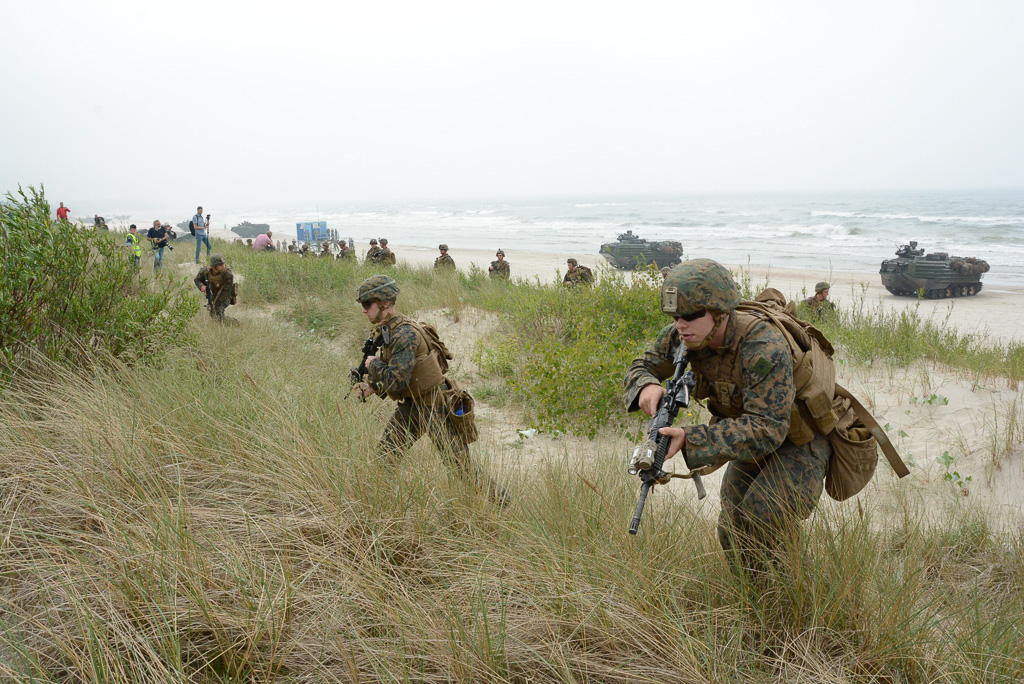 THE PENTAGON — The annual Baltic Operations exercise is underway for the 46th time, continuing last year’s priorities of increasing the integration of aircraft and ships and boosting the difficulty of the free-play phase that concludes the exercise.

Royal Navy Rear Adm. Guy Robinson, deputy commander of Naval Striking and Support Forces NATO, told reporters today in a media teleconference that this year’s iteration of BALTOPS would include two amphibious landings, mine detection and neutralization exercises, naval live-fire events and board and search operations on participating merchant ships. Twenty-two nations are participating, with 16 of them sending forces – about 5,000 personnel, 42 ships and a submarine, and more than 60 aircraft.

Robinson said the exercise was meant to develop skills in ongoing focus areas such as mine warfare; introduce new missions like joint personnel recovery; and continue the quest for better integration of air and maritime platforms so all partner nations in the region can share a common operational picture.

This continues last year’s emphasis on integration, when then-U.S. 6th Fleet Commander Adm. Chris Grady said “one of my strongest initiatives was to increase the level of air integration in the exercise. … The emphasis on air integration is really important to us. We know that we are never going to fight alone – it’s always going to be joint, it’s always going to be combined. Which is why on the combined side it’s a NATO exercise, and on the joint side we want to fight in all domains and practice that and practice that integration. That means air, sea and land.”

On the addition of joint personnel recovery, Robinson said the goal is to practice rescuing a downed pilot or a broken-down ship and preparing for potential casualties. The participating militaries will also build the doctrine and procedures that would allow them to cooperate in a rescue situation. As a reminder of the need for this skillset, BALTOPS leaders also conducted a flower-laying ceremony on June 2 ahead of the start of the exercise to commemorate U.S. airmen who went missing when their PB4Y-2 Privateer crashed into the Baltic Sea on April 8, 1950, after being shot down by Soviet fighter planes. The plane crashed into international waters near Latvia, and despite a search and rescue effort they were never recovered.

Robinson declined to discuss what types of equipment were being used for the mine warfare portion of the exercise but said events like BALTOPS are an opportunity to experiment with new capabilities. He said participating nations were encouraged to bring in new gear to test on a technical level and to begin to incorporate into doctrinal and tactical development. 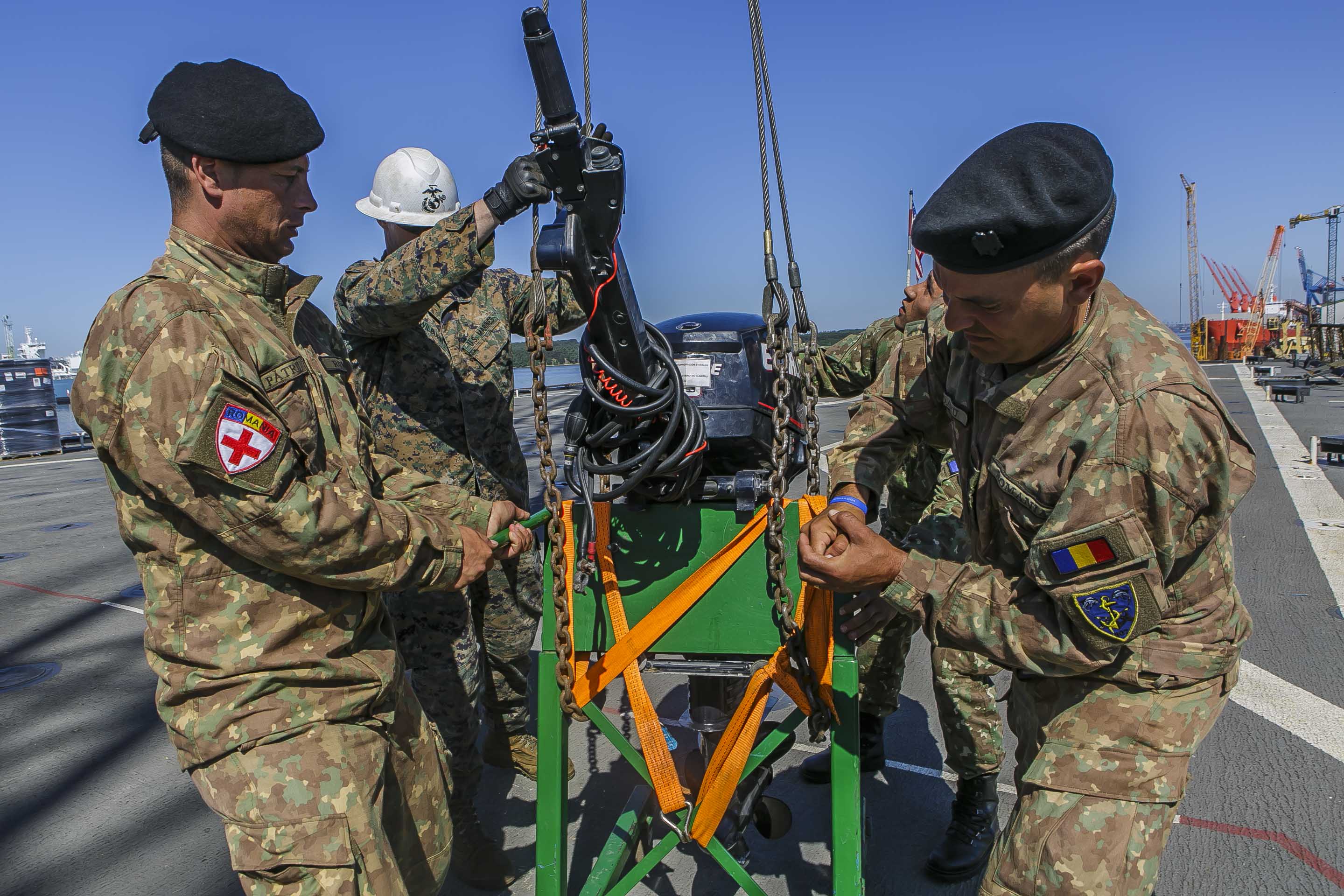 Last year, Grady said BALTOPS was evolving to become more realistic, in part through using a larger red force as the adversary in the free-play phase, an open-ended event that culminates the skills-based training earlier in BALTOPS. This year, Robinson said the free-play phase was further evolving to allow the red force more discretion in how it behaves to contest the blue force.

“We have a red task group and a blue task group who are given different missions to complete. Now often in exercises the people playing the red, or the bad guys, however you want to describe them, don’t get much attention – they get a script and they don’t get as much out of the exercise,” he said.
“This time we’ve taken a very different approach; we’ve given very clear orders to both task groups, we’ve empowered the task group commanders, we really encouraged them to take ownership of their task groups to develop them through the [skill-building] phase so then when we get into the free-play dynamic phase, we want them to use their initiative. They’ve both got objectives, which are clearly against each other, and they’ve got to use their cunning and their training they had in the exercise to work against each other and try to meet their objective. I think they get a lot from that, and it allows them more freedom, it allows them the ability to exercise their own command and not just the high-level command at [command ship USS Mount Whitney (LCC-20)] directing their every move.”

Franchetti said during the teleconference that there were some Russian ships operating nearby when BALTOPS kicked off from Klaipeda, Lithuania, on June 3, though she did not say how many or what types. She noted that Russia had participated in BALTOPS 19 times in the 46-year history of the exercise but that its invitation was rescinded in 2014 after the annexation of Crimea and aggression in Eastern Ukraine.

“We continue to operate here in international waters,” Franchetti said, and “we will expect to operate with non-participant navies and continue to operate safely and professionally with all the navies we encounter. We have been very transparent in planning BALTOPS operations, and we’ll continue to work out here at sea together and develop the capabilities we think we need to have to maintain a safe and stable Baltic region.”

The U.S. sent four ships: Mount Whitney, USS Oak Hill (LSD-51), USS Bainbridge (DDG-96) and USNS Carson City (T-EPF-7). U.S. aircraft include Air Force B-1 bombers that dropped mine-like targets for the mine warfare portion of the event, as well as EA-18G Growlers from the Harry S. Truman Carrier Strike Group – currently operating in the Adriatic Sea – that joined for a photo exercise.