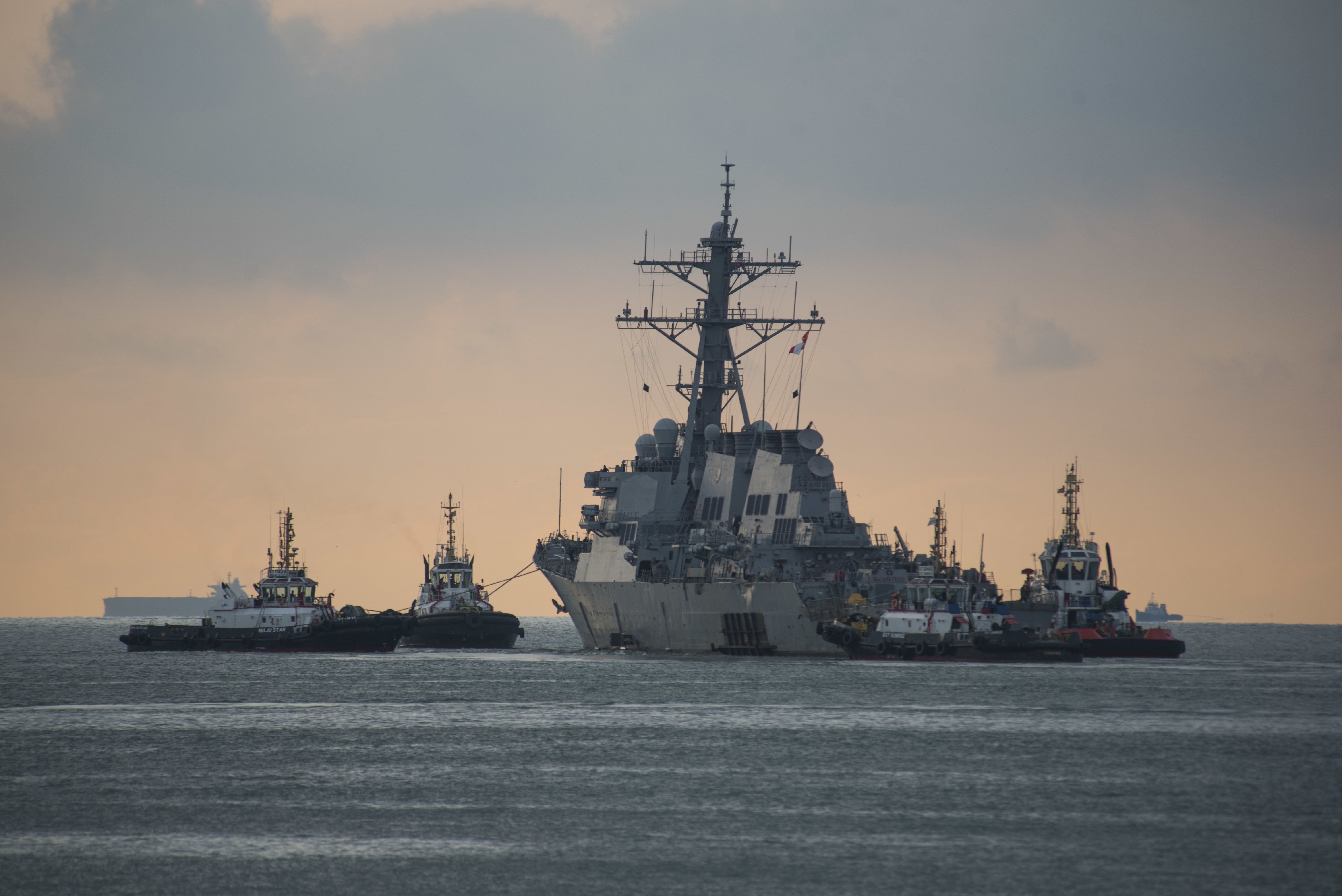 WASHINGTON NAVY YARD — A senior enlisted member of the guided-missile destroyer USS McCain (DDG-56) crew pleaded guilty to a single charge of dereliction of duty for his part leading up to a fatal August 2017 collision in a summary court-martial.

Chief Boatswain’s Mate Jeffery Butler, 40, admitted to a military judge on Thursday he had inadequately trained the sailors who manned the bridge during the collision between McCain and the merchant oiler Alnic MC. Butler, the senior enlisted sailor in charge of the deck division on McCain, was not on the bridge at the time of the collision. He was sentenced to a reduction in rank from E-7 to E-6 – Boatswain’s Mate First Class – by military judge Cmdr. William Weiland.

Butler had previously faced admiral’s mast shortly after the collision off the coast of Singapore that resulted in the death of ten sailors. At mast, Butler received a punitive letter of reprimand and was ordered to forfeit one-half month’s pay for one month.

As part of a plea agreement, Butler admitted to not properly training watchstanders on McCain’s touchscreen integrated bridge and navigation system. Failure to properly the operate the IBNS led to watchstanders on the bridge losing control of the ship and moving into the path of Alnic MC, the Navy said in a summary of its investigation into the collision.

During the transit in a heavily traveled shipping lane off Singapore early in the morning, ship commander Cmdr. Alfredo J. Sanchez ordered the responsibilities of steering the ship and maintaining the throttle to be split between to watch stations on the bridge – the helm control and the nearby lee helm.

“This unplanned shift caused confusion in the watch team, and inadvertently led to steering control transferring to the lee helm station without the knowledge of the watch team,” read a summary of the investigation released late last year.
“The CO had only ordered speed control shifted. Because he did not know that steering had been transferred to the lee helm, the Helmsman perceived a loss of steering.”

As the enlisted head of the deck department, it was Butler’s job to train the sailors standing watch how to use the system correctly. In addition to manning the helm, the deck division is responsible for tasks on a destroyer like anchoring, mooring, underway replenishment, small boat operations and working the flight deck.

Butler reported to McCain after serving aboard the amphibious warship USS Germantown (LSD-42), where he had won the sailor of the year award on the ship in 2014, according to former Germantown commander Cmdr. Gary Harrington, who testified on Butler’s behalf during the trial.

He was promoted to Chief on Germantown and reported for duty on McCain in April 2016. Around the same time, the IBNS system was installed on the bridge of the destroyer.

In testimony, Butler said the extent of the training he received in the use of the new navigation system was about an hour-long tutorial from a master helmsman familiar with the IBNS and then reliance on technical manuals. After the tutorial and reading the manuals, it was then his responsibility to teach younger sailors how to operate the system. He said it was difficult to find others nearby with experience on the system because McCain was the only ship at the time in U.S. 7th Fleet with IBNS.

“[It was] difficult to get training,” he said.
“We asked for the techs to come over, but they never showed.”

Regardless, Butler said he could have done more to better train his division.

“With time and more training, I could have stopped all that,” he said.

Since the collision, Butler has been still part of ship’s company, working as the destroyer was taken from Singapore on a heavy-lift transport and moved to a dry dock in Yokosuka.

“I’m still attached to the John S. McCain working every day since Singapore,” he said in a statement during the trial.
“I put the ship on the heavy lift, came home a week later, went to Admiral’s Mast, received punishment, got the ship off the heavy lift, brought her pier side, into dry dock, and then was told I was going to court-martial. Even through all that, I remain the Chief, still training and guiding sailors daily.”

He also addressed the families of the ten sailors who died in attendance.

“I met many of your sailors… I knew them on different levels,” he said.
“I am truly sorry for your losses. They were more than my shipmates – they were family to me.”

Tomorrow, former McCain commander Sanchez will face a special court-martial for his role in the incident on one count of dereliction of duty.

The trials are overseen by Adm. James Caldwell, director of Naval Reactors, who is the Consolidated Disposition Authority appointed to consider additional accountability actions for the fatal McCain and June 17 USS Fitzgerald (DDG-62) collisions.