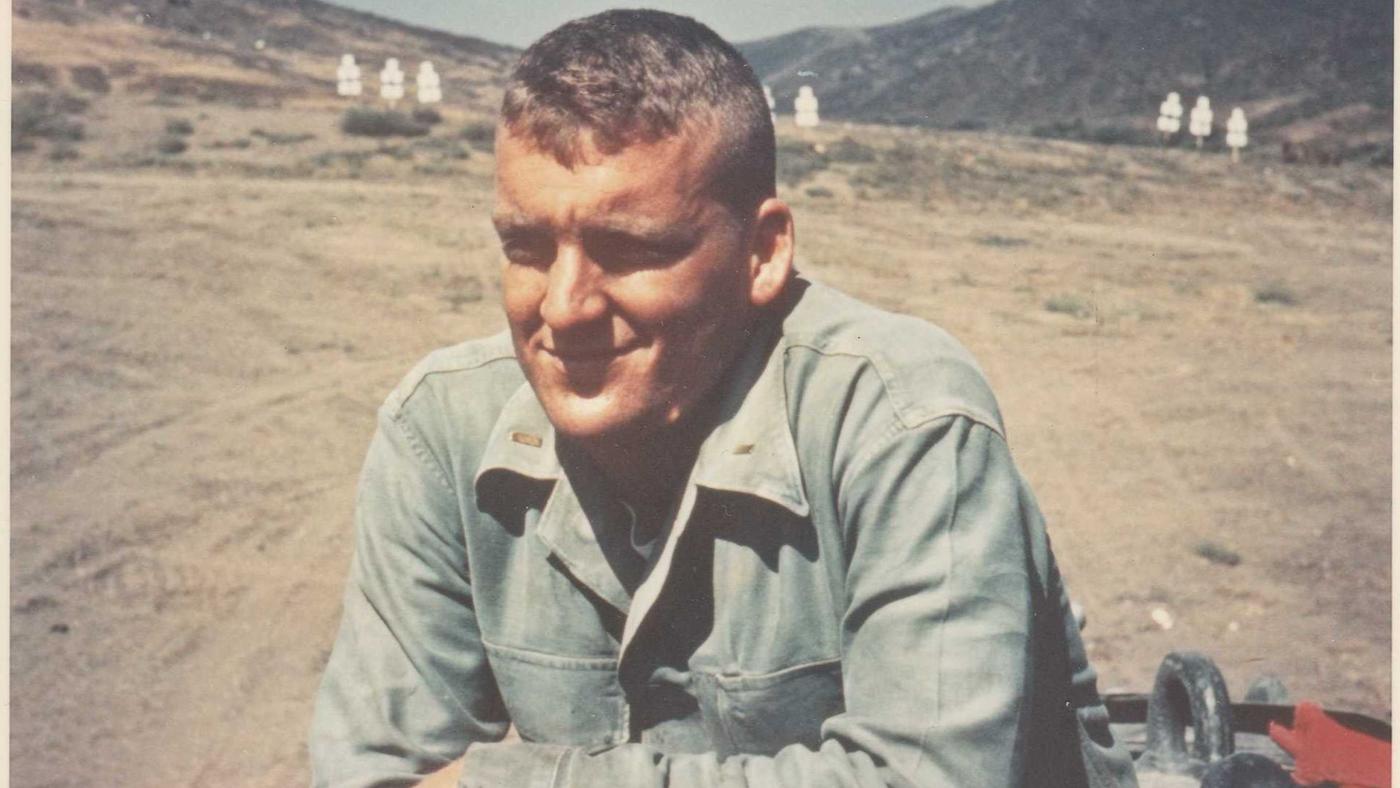 CAMP PENDLETON, Calif. – With a Marine down and several dozen heavily-armed enemy fighters approaching his location, 1st Lt. Philip H. Sauer grabbed his .45-cal pistol and ordered his other three men off the hill outside Khe Sanh.

Just a few hours earlier, the five-man artillery observer team had organized and set out to recon Hill 861 and potentially set up an observation post. But enemy bunkers and trenches teeming with North Vietnamese troops dotted the key, high terrain northwest of the Khe Sanh combat base.

When his point man was cut down by enemy fire, Sauer, used his own .45 pistol to provide covering fire as the Marines dove for cover and scrambled out of the kill zone.

Only one Marine survived that April 24, 1967, ambush, the first major fight with NVA in the area. It would mark the start of what became known as the “Hill Fights” during the siege of Khe Sanh the following year.

Sauer, along with two infantrymen and a radio operator, died on Hill 861 that morning. The final actions of Sauer, a 25-year-old from Coronado, Calif., went largely unheralded except for a mention in a Stars and Stripes article and a Marine Corps publication, U.S. Marines in Vietnam: Fighting the Northern Vietnamese, 1967, that drew from after-action reports filed by a company commander.

“That act of heroism – in the hills and jungles of Vietnam on this exact day, 51 years ago – is here today recognized,” retired Lt. Col. David Little, a Marine Vietnam combat veteran, told the crowd. “This recognition is a tribute to all Marines. Marines always remember. Marines are always faithful.”

It was Little’s curiosity, prompted by a 2015 comment by a newfound swimming pal, Tom Sauer, who mentioned a brother killed in battle in Vietnam. Little later dug into official records and Internet searches, found the surviving Marine and submitted a dossier with the help of Rep. Scott Peters (D-Calif.). In March, after Marine Corps and Navy reviews, Navy Secretary Richard V. Spencer approved awarding Sauer, posthumously, the Silver Star for “gallantry and intrepidity against the enemy.”

Sauer “stood his ground” against more than 30 enemy troops who were heavily armed with automatic weapons and grenades, Maj. Gen. Eric M. Smith, who commands the 1st Marine Division, said during a morning ceremony outside division headquarters.

“That’s what Marines do. Senior Marines taking care of junior Marines. Lt. Sauer was senior. It was his position and his responsibility to take care of the rest of that patrol, and he did that at the cost of his life,” he said.
“Lt. Sauer did what was right; that’s what we expect. He did it with unbelievable courage, armed with a pistol against 30-plus enemy with automatic weapons… Who does that? Phil Sauer did that.” 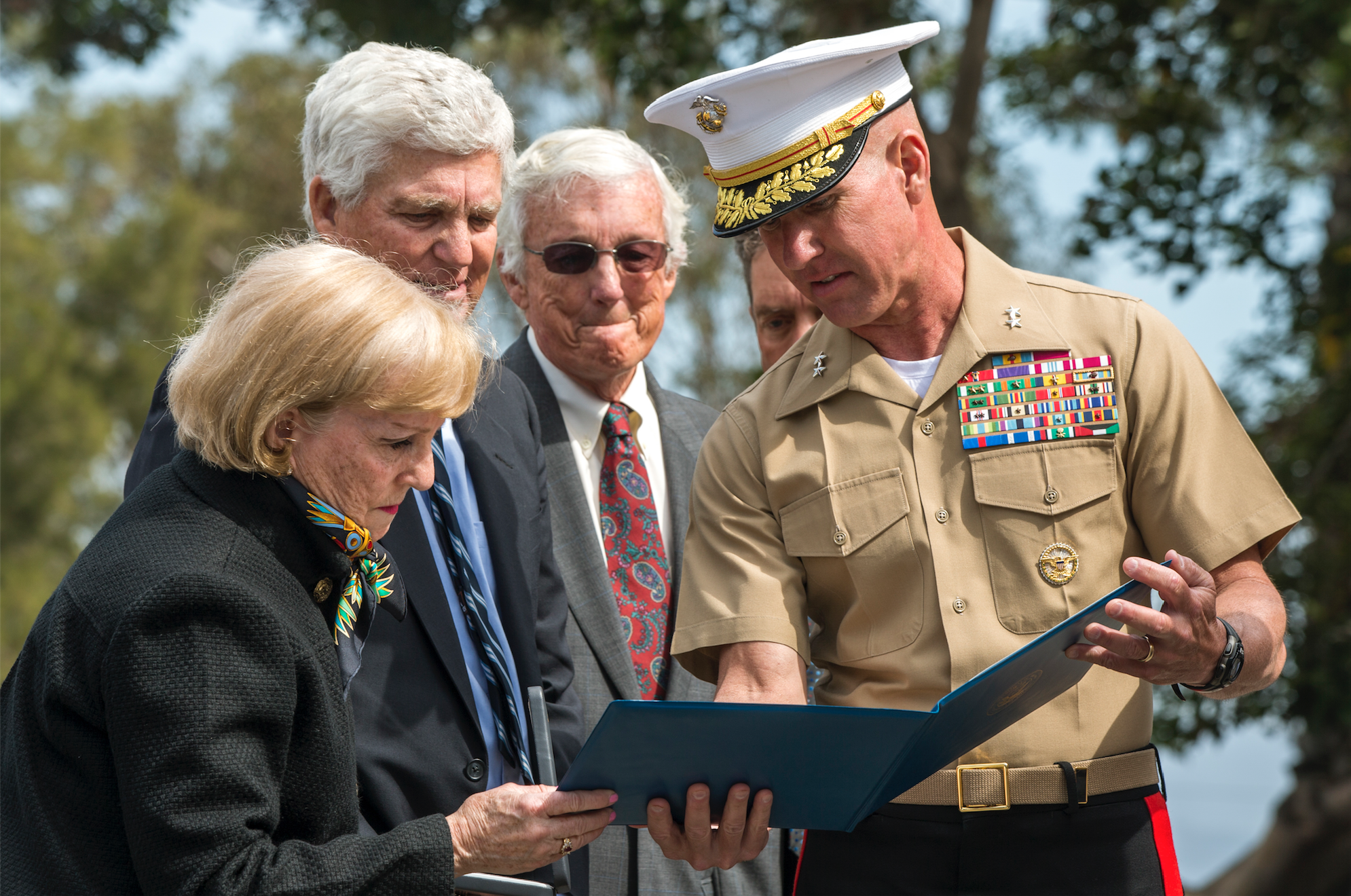 “It has been said of the Marines that you create bonds of camaraderie, of esprit de corps and standards of conduct so strong that you will let nothing stand in the way of accomplishing your mission. That was Phil,” Mary Schoelch, 72, of Shoreview, Minn., told the crowd.
“He epitomized the character of a great Marine. He loved his Marine Corps family. He took care of his men, and he lived and he died honoring your core values of honor, courage and commitment. We love and miss him.”

Smith presented the nation’s third highest award for combat heroism on Tuesday to Sauer’s sister and three brothers. “Lt. Phil Sauers gave his life so the other Marines might keep theirs,” he added.

From his front-row seat, Bill Marks looked on.

Marks, 72, is the sole survivor of the engagement. On that ill-fated day, he was a 21-year-old lance corporal and forward observer with Delta Battery, 2nd Battalion, 12th Marines, when he met Sauer for the first time that morning. Two riflemen from 1/9 joined them, along with Marks’ radio operator, PFC Bradley A. Nelson, a 19-year-old from Portland, Ore.

The mission to patrol on Hill 861 was unsettling, recalled Marks, today sporting a suit and thick, mostly gray hair. “It’s not going to be a good day,” he remembered thinking. But up they went, cutting through some bamboo as rain fell and cooled the air a bit. They were walking into an ambush.

When they reached the top of the hill and caught their breath, “all hell broke loose,” he said. It’s hard to explain, 30 guys shooting automatic weapons at you and throwing hand grenades at you.”

Marks could see the fallen Marine, the patrols’ point man, but “you couldn’t get up to him,” he said. He jumped into a nearby foxhole, about three feet deep, as grenades exploded nearby, and “I could see bullets whizzing by.”

Sauer looked over at him “and I said, ‘We’ve got to get out of here. We’ve got to get the control back,’” he said. “I’ll catch up with them,” he told the lieutenant. He fell back with the other grunt in the section as automatic and machine-gun fire cracked through the air. “I couldn’t hear his pistol anymore and figured, he’s not here,” he said of Sauer.

Continuing down the hill, Marks found his radio operator on the ground. “I looked at his face, and he was gone. It’s not a good day,” he said. Sliding down the rain-slicked hill, “they’re still shooting at us.”

“It was just overwhelming.” 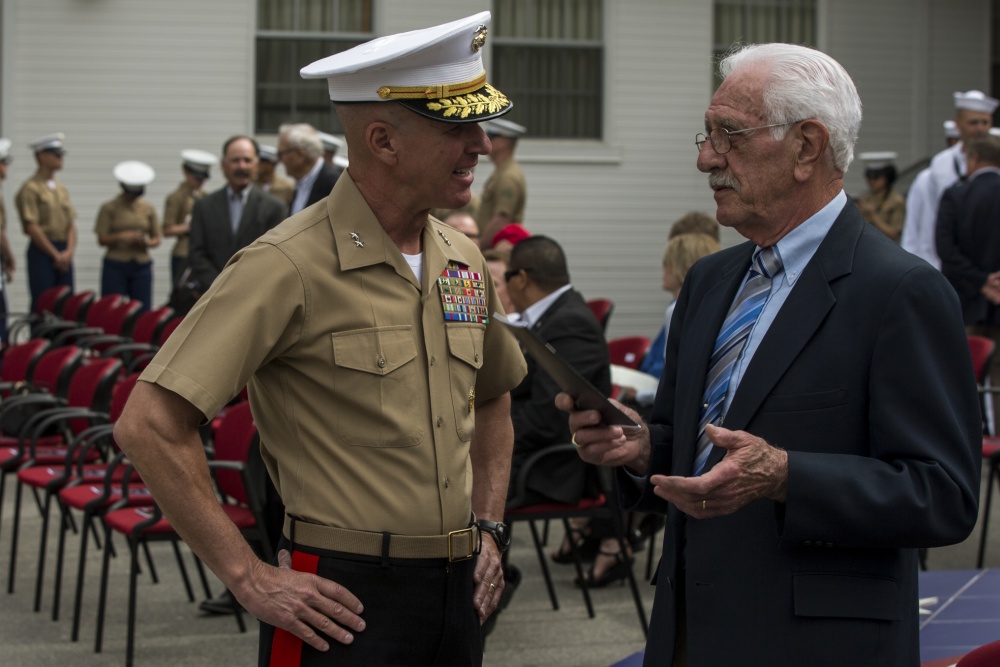 Returning to the base, Marks told his lieutenant about what happened. They launched fire missions against the entrenched NVA and Viet Cong forces on Hill 861, but front on his mind was the four Marines – Sauer, Nelson and the two infantrymen – still on the hill.

Marks completed his two-year enlistment and returned home. Married with two children and four grandchildren, he’s retired after a career working in the electric utility field. Sauer was “one of a kind,” he said, and “he must have realized that he wasn’t going to go any further. He was going to stand his ground and go down for the count there.”

Sauer’s four siblings, who had been separated by their parent’s divorce and subsequent moves, knew little about what happened to their brother on Hill 861. “There weren’t a lot of details about his death given to us as a family back in 1967,” Schoelch told USNI News. His body was recovered and he was buried at Fort Rosecrans National Cemetery in San Diego, near where their mother and stepfather, the late-Rear Adm. Walter C. Winn, resided in Coronado. About 10 years ago, they had combed the Internet and sought unclassified documentation, she said, but Little’s research and locating of Bill Marks helped provide a clearer picture of what happened.

Tom Sauer, 70, said he didn’t know until recently that his comment to David Little about losing his brother in Vietnam would lead to the Silver Star. Little told USNI News that he wanted to wait to see what the Navy decided before mentioning it to the family. 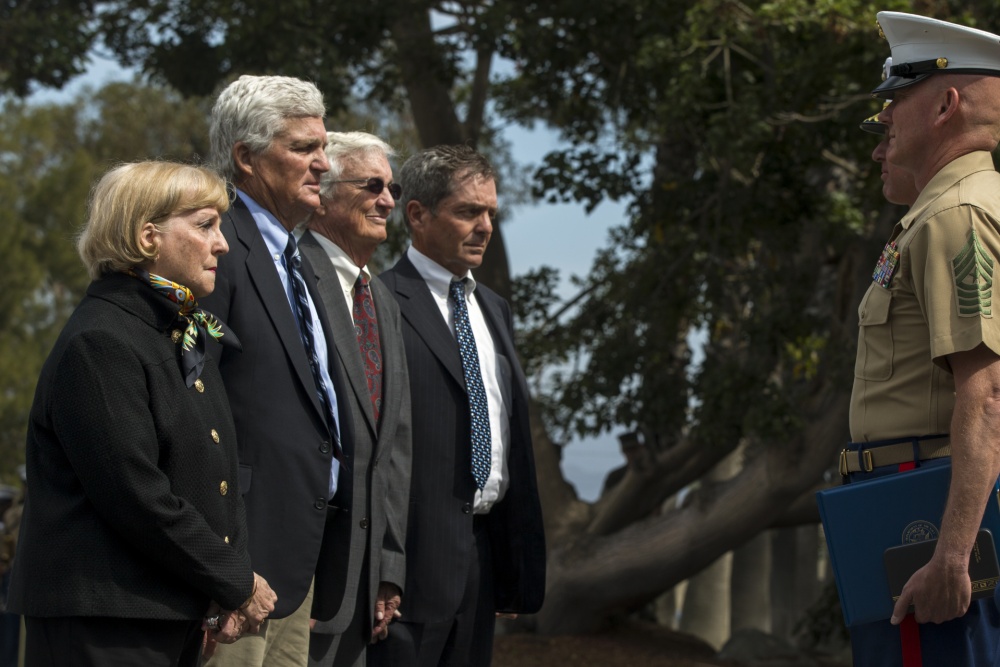 Tom Sauer said his brother was “a very humble guy” who might be uncomfortable with the mention and attention the ceremony provided, and he would have characterized his actions on Hill 861 as “just his job.”

Phil Sauer played football in high school and graduated from Westminster College in Missouri before getting commissioned into the Marine Corps. During his freshman year, one day he asked a good friend, Dennis Behan, for the Marine Corps Handbook.

“He really believed the cause there [in Vietnam] was right,” Tom Sauer said.
“He wanted to be a part of it. He really thought he would get to combat, and was gung-ho about it.”

Tom Sauer was a college student when he was pulled out of class and told his brother was missing in action. The family later learned his fate. “He wouldn’t have believed he was anyone special. It was just what any Marine would do in the same circumstances, just take care of his people.”

Behan already was a Marine, enlisting in 1961, and he gave him the booklet to read. “I could see how interested he was. He was so proud of me going into the Marine Corps,” he recalled. It was the last time Behan had seen Phil Sauer.

The 220-lb Sauer was smart and “just tough as nails. He wouldn’t take it from anybody,” said Behan, of Brookhaven, Minn. If he hadn’t gotten killed in Vietnam, “he would have made the Marine Corps his life.”