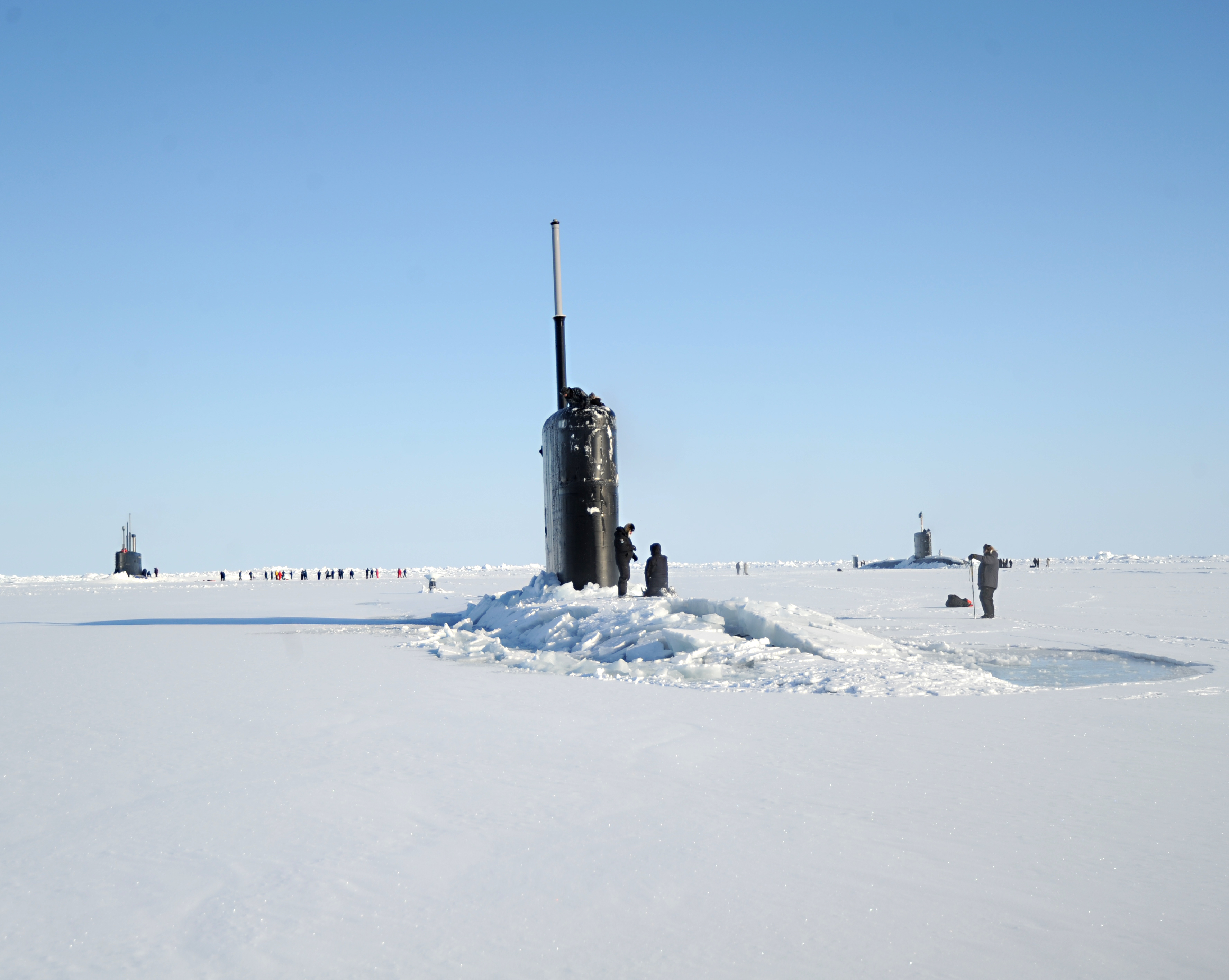 The Seawolf-class fast-attack submarine USS Connecticut (SSN 22), left, Los Angeles-class fast-attack submarine USS Hartford (SSN 768), center, and the Royal Navy hunter killer submarine, HMS Trenchant (S-91) surface through the ice during the multinational maritime Ice Exercise (ICEX) in the Arctic Circle on March 21, 2018. ICEX 2018 is a five-week exercise that allows the Navy to assess its operational readiness in the Arctic, increase experience in the region, advance understanding of the Arctic environment, and continue to develop relationships with other services, allies and partner organizations. US Navy photo

Navy Secretary Richard V. Spencer told the Senate Armed Services Committee that a Navy Arctic Strategy was set for release this summer, as a follow-up to the 2014 U.S. Navy Arctic Roadmap.

Spencer noted that Russia is paving 12,000-foot runways and building up a military presence in the Arctic in the name of “search and rescue,” he said while making air-quotes. The U.S. Navy, meanwhile, does not have ice-hardened ships and has minimal presence in the region, aside from the annual ICEX submarine event.

“We need to have presence up there,” he told lawmakers.

Spencer and Chief of Naval Operations Adm. John Richardson spoke to reporters after the hearing about the Arctic strategy document. Asked what triggered the decision to revise the 2014 document now, Richardson said “the Arctic triggered it” – and Spencer added, “the damn thing melted.”

“The Arctic ice caps are as small as they’ve been in my lifetime,” Richardson said.
“And that gives rise to strategic changes. Waterways that are open. The secretary mentioned the blue-water Arctic. Continental shelves that are exposed, and the resources on those shelves. So there are strategic issues that arise from that shrinking of the icecap. And then there’s this National Defense Strategy that’s changed our focus as well. So it’s really, from a number of perspectives, about time to do that again.”

The 2014 roadmap suggests that, “while the region is expected to remain a low threat security environment where nations resolve differences peacefully, the Navy will be prepared to prevent conflict and ensure national interests are protected.”

Since that time, however, Russian and Chinese naval activities in the region have grown, prompting conversations in the U.S. and Europe about what the future of Arctic operations might look like. The U.S. Coast Guard has even suggested that its icebreakers may do well to be armed with anti-ship cruise missiles.

The focus on operations north of the Arctic Circle are not limited to the surface navy. The Marine Corps has already committed to re-learning cold weather operations, Commandant of the Marine Corps Gen. Robert Neller said in the hearing, after the “skillsets, equipment and expertise atrophied” after the Cold War.

Neller told the senators that about 300 Marines are already training in Norway but that the service is awaiting approval from the country to bring a greater number of Marines in for cold-weather training with a military that is considered an expert. He also pointed to amphibious exercise Trident Juncture, scheduled for this fall, that will bring NATO navies and amphibious forces together to operate in a cold-weather environment. And third, Neller told Sen. Dan Sullivan, a Republican from Alaska, that the Alaskan air training ranges were useful both due to the frozen weather, the complex terrain and the sheer size – Eielson Air Force Base is about three times larger than Nellis AFB, the commandant said – and that, while some Marines already train at Eielson, he hoped to send more.

Ultimately, Neller said, not every Marine would receive cold-weather training, but he hoped that enough would cycle through cold-weather training venues so that, if called upon, enough expertise would be dispersed across the force to help units be effective in that climate.