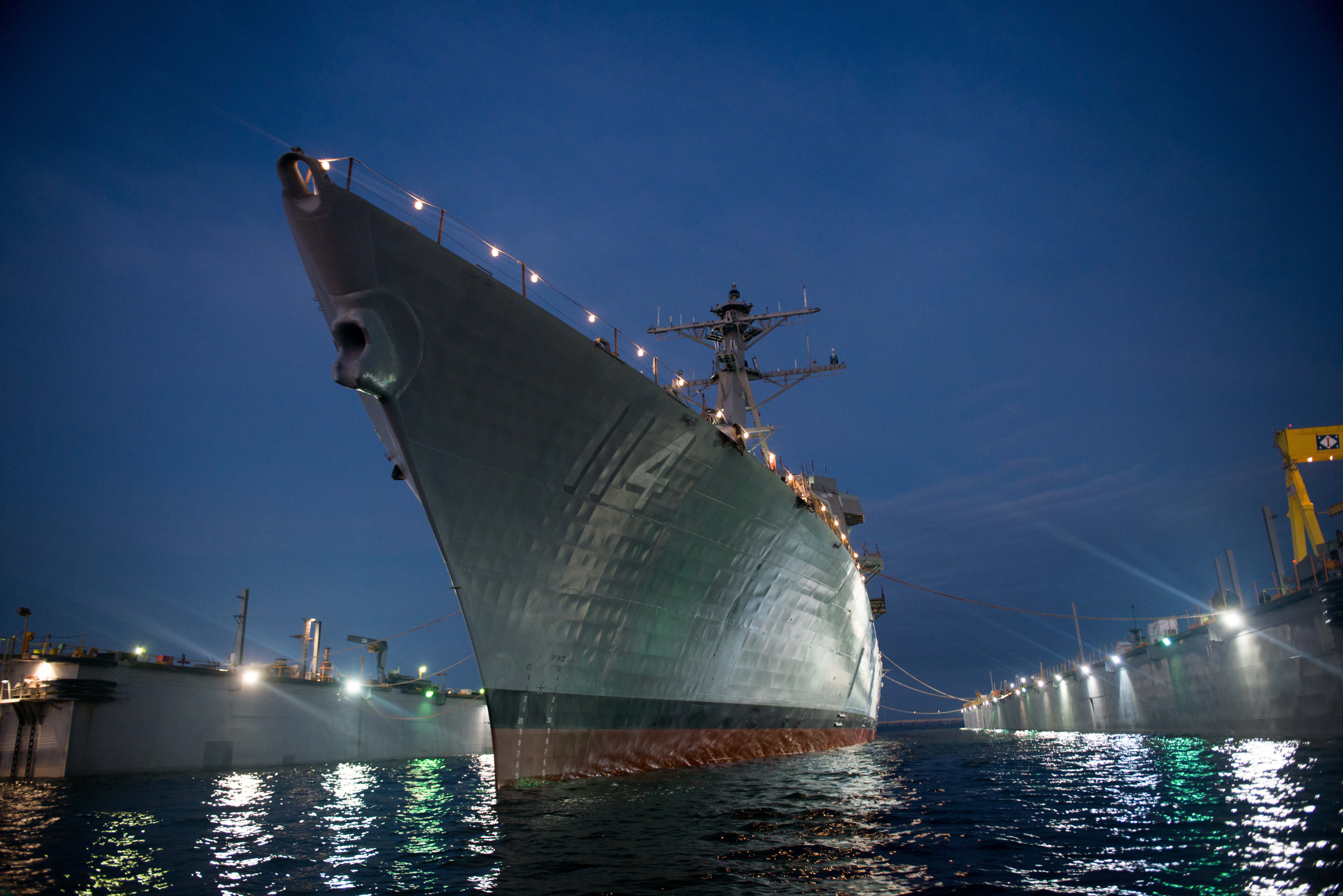 The new DDG-51s such as Ralph Johnson are being built with the Aegis Baseline 9 Integrated Air and Missile Defense system. These ships have increased computing power and radar upgrades that improve detection and reaction capabilities against modern air warfare and ballistic missile defense threats. The modified version of the Aegis Combat System creates a composite picture of the battle space by enabling ships such as Ralph Johnson to link radars with other ships and aircraft. The new destroyers will be able perform traditional air warfare missions and ballistic missile defense missions simultaneously.

“The future USS Ralph Johnson will become one of the most capable weapons in our nation’s arsenal,” Secretary of the Navy Richard V. Spencer said in a Navy news release.
“It will serve for decades to come as a fitting tribute to the heroic actions of Pfc. Ralph Johnson who, in the face of certain death, sacrificed his own life to save the life of a fellow Marine.”

Gen. Robert Neller, commandant of the Marine Corps, is scheduled to deliver the ceremony’s principal address. The ship honors Marine Corps Pfc. Ralph Henry Johnson, who posthumously received the Congressional Medal of Honor for his “conspicuous gallantry and intrepidity” during the Vietnam War, according to his citation.

The following is the text of Congressional Medal of Honor award for Pfc. Ralph Henry Johnson

The President of the United States in the name of the Congress takes pride in presenting the MEDAL OF HONOR posthumously to PRIVATE FIRST CLASS RALPH H. JOHNSON, UNITED STATES MARINE CORPS, for service as set forth in the following CITATION:

For conspicuous gallantry and intrepidity at the risk of his life above and beyond the call of duty while serving as a Reconnaissance Scout with Company A, First Reconnaissance Battalion, First Marine Division in action against the North Vietnamese Army and Viet Cong Forces in the Republic of Vietnam. In the early morning hours of 5 March 1968, during Operation ROCK, Private First Class Johnson was a member of a fifteen-man reconnaissance patrol manning an observation post on Hill 146 overlooking the Quan Duc Duc Valley deep in enemy controlled territory. They were attacked by a platoon-size hostile force employing automatic weapons, satchel charges and hand grenades. Suddenly, a hand grenade landed in the three-man fighting hole occupied by Private Johnson and two fellow marines. Realizing the inherent danger to his two comrades, he shouted a warning and unhesitatingly hurled himself Upon the explosive device. When the grenade exploded, Private Johnson absorbed the tremendous impact of the blast and was killed instantly. His prompt and heroic act saved the life of one Marine at the cost of his own and undoubtedly prevented the enemy from penetrating his sector of the patrol’s perimeter. Private Johnson’s courage, inspiring valor and selfless devotion to duty were in keeping with the highest traditions of the Marine Corps and the United States Naval Service. He gallantly gave his life for his country.