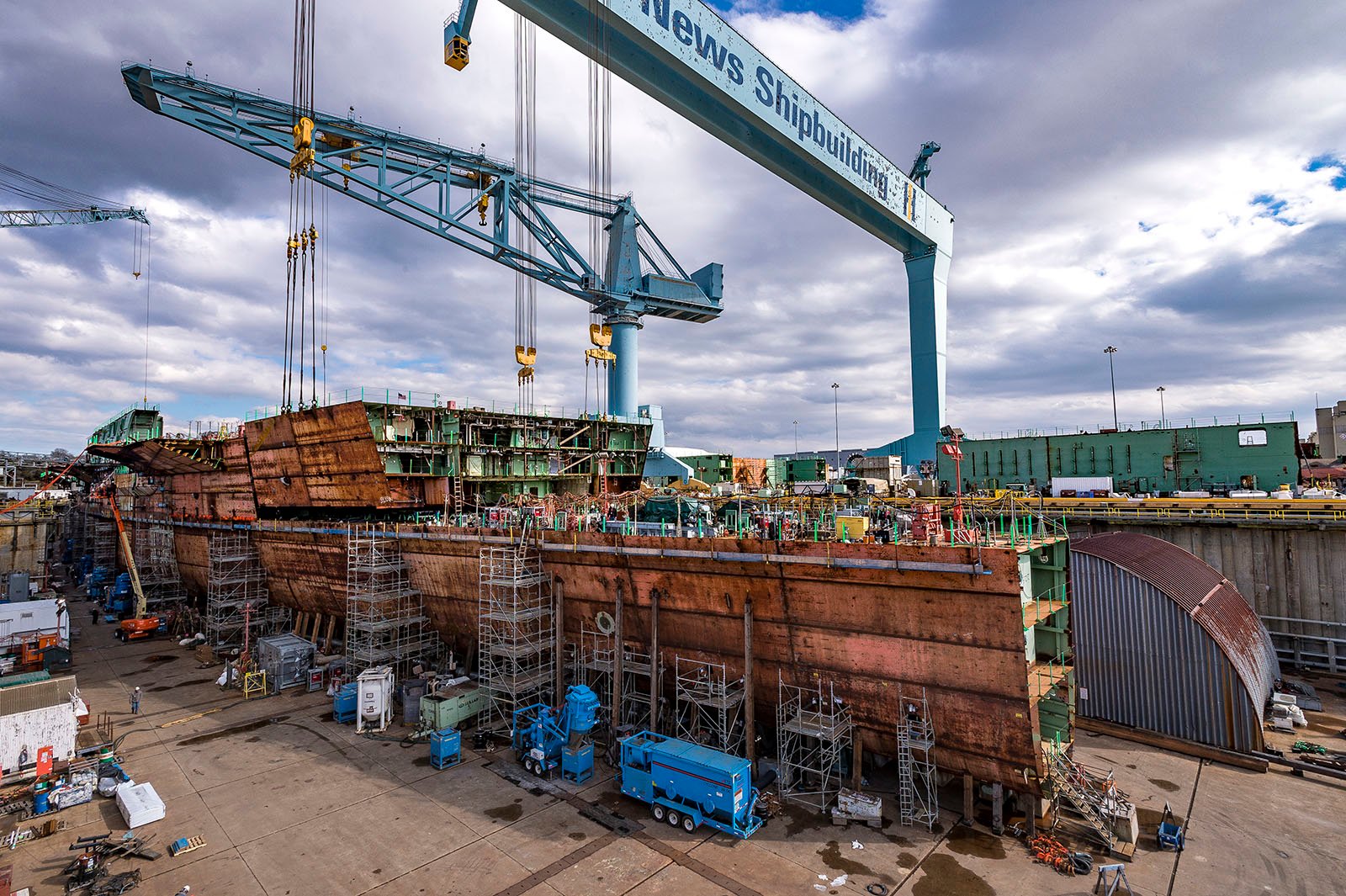 The galley deck is lowered into place on board the carrier John F. Kennedy (CVN79). Newport News Shipbuilding photo.

THE PENTAGON – The Navy today moved towards signing the first two-carrier contract since the Reagan Administration, asking builder Newport News Shipbuilding for additional data on the cost-savings potential for buying CVNs 80 and 81 together.

The service released a request for proposal to the company this afternoon, with the hopes of receiving the necessary cost and schedule predictions by late summer or early fall and potentially reaching a two-carrier agreement with Newport News Shipbuilding by the end of the calendar year.

Assistant Secretary of the Navy for Research, Development and Acquisition James Geurts told reporters today that it is still unclear what the final product would be after today’s RFP – whether it would be a construction contract for two aircraft carriers, or some other means of allowing for the Navy and its prime contractor to buy two ship-sets of materials at a time.

“If you’re building two of these, your return on investment and the sharing between the government and industry to drive towards affordability, I think, there’s a much better return on investment,” he said.
For example, “instead of buying one set of parts we buy two sets of parts.”

Geurts said the main goal is cost-reduction – though a reduction in man-hours it takes to build the yet-unnamed CVN-81 would likely be reduced as a byproduct of the two-carrier buy, and that ship could deliver as much as a year early, based on data the Navy already reviewed.

The Navy would need some additional authorities from Congress – chiefly, incremental funding authority for both aircraft carriers – which Geurts said could be worked out this spring and summer during the Fiscal Year 2019 National Defense Authorization Act negotiations and put in place by the end of the year, to align with a planned handshake agreement with Newport News Shipbuilding by the end of the year.

Though Geurts couldn’t say exactly how much the Navy might save in this shipbuilding strategy, he said there were “significant affordability opportunities … worth looking at.”

“I would surmise the industry partners are probably, when they work with suppliers, looking for option buys. So they’re likely looking at ways they can contract to order one with an option for a second set of kits,” Geurts said.
“And then, of course, we’re going to look at what are all the industry investment in terms of things they’re going to do to the shipyard, going to a more digital approach – all that will be occurring in parallel. So I see savings coming from multiple different areas: one will be reduction in labor, one will be more efficient suppliers that can build in a bulk quantity, and then third is we’ll have a very similar design for both so we can really improve the learning as we continue to build more carriers.”

Mike Petters, president of Huntington Ingalls Industries, the parent company of Newport News Shipbuilding, said in a statement today that “we believe the most effective way to reduce cost of aircraft carriers is to take a multi-ship purchase approach and build them every three to four years. Buying two ships at once stabilizes the Newport News Shipbuilding workforce and their national supplier base, allows us to buy materials in quantity, and phase work more efficiently. This action by the U.S. Navy allows us to work with them to better define and achieve the significant cost savings that will result from this approach.”

Rep. Rob Wittman (R-Va.), chairman of the House Armed Services seapower and projection forces subcommittee, said in a statement that “the RFP released by the Navy today is a great step towards strengthening the Fleet. A dual procurement allows the U.S. Navy to build to a fleet of 12 aircraft carriers more quickly as prescribed by the FY18 National Defense Authorization Act – which established that the Navy should maintain 355 ships, including 12 aircraft carriers. This dual buy would be beneficial to both the taxpayers and to our maritime industrial base, as it shows that Congress is committed to the thousands of workers who build and maintain aircraft carriers every day. Smart acquisition has the potential to save $2.5 billion. We need to give the Fleet the ships it needs to meet the challenges of today and prepare for the threats of tomorrow.”

The Navy has eyed a two-carrier buy for years now but has grappled with how to implement that, given that the service is buying carriers five years apart. Public talks about the logistics of buying CVNs 80 and 81 together began in earnest in the spring of 2016, but Geurts told the House Armed Services Committee earlier this month that cost analysis was still taking place.

Geurts told lawmakers that previous two-carrier buys in the Nimitz-class achieved about 10-percent savings, but he noted the Navy is already halfway through buying material for CVN-80 so there could be a smaller savings potential in the CVN-80/81 buy. Pressed for a numerical answer, Geurts suggested the Navy could save somewhere between $1 billion and $2.5 billion on the deal.

Naval Sea Systems Command commander Vice Adm. Tom Moore told USNI News in December that an 80/81 two-carrier buy wouldn’t help CVN-80, the future Enterprise, deliver any sooner, but it would allow CVN-81 to deliver faster and at a lower cost.

“The facts are pretty clear: when we’ve had a chance to do two-ship buys on the carrier side, with CVN-72 and 73 and then again with 74 and 75, in terms of the total cost performance of the ships and the number of man-hours it took to build those ships, within the Nimitz-class those four ships were built for the fewest man-hours and the lowest cost. So you’re clearly getting benefit out of that, but you have to balance it against the other competing needs of the budget,” Moore told USNI News in the December interview.

Importantly, those two two-carrier buys involved buying the carriers much closer together. In each block buy, the two carriers were centered about two and a half years apart, whereas CVN 80 and 81 are planned to be five years apart but could shift closer to four years apart.

Industry is also very interested in the idea of a two-carrier buy, as well as shortening the centers between carrier production.

“The closer the ships are – and there’s kind of a sweet spot at about three years; with the industrial base it’s probably more like three-and-a-half years to four years – but the closer the centers, the greater the labor efficiency because my workforce doesn’t have to build up to build one carrier and then go down and wait and go back up, build a second carrier and go down,” Newport News Shipbuilding President Jennifer Boykin told USNI News in October.
“We also have a tremendous amount of data from Nimitz class and also from submarines that if we buy bulk, if we go to the supply base and get two ship sets as opposed to one ship set, in aggregate that offers about a 10-percent opportunity to reduce cost on material.”

Boykin said today’s current carrier build rate of one every five years will never allow the Navy to reach its goal of having 12 carriers, “and worse than that, we run the risk of going below 10.” For both reasons – cost efficiency and reaching a 12-carrier fleet – Boykin said the company is strongly advocating building carriers every four years.

The Navy released a CVN 80/81 two-ship buy Request for Proposal (RFP) to Huntington Ingalls Industries – Newport News Shipbuilding (HII-NNS) to further define the cost savings achievable with a two ship buy. With lethality and affordability a top priority, the Navy has been working with HII-NNS over the last several months to estimate the total savings associated with procuring CVN 80/81 as a two-ship buy.

“In keeping with the National Defense Strategy, the Navy developed an acquisition strategy to combine the CVN 80 and CVN 81 procurements to better achieve the Department’s objectives of building a more lethal force with greater performance and affordability,” said James F. Geurts, Assistant Secretary of the Navy, Research Development and Acquisition. “This opportunity for a two-ship contract is dependent on significant savings that the shipbuilding industry and government must demonstrate. The Navy is requesting a proposal from HII-NNS in order to evaluate whether we can achieve significant savings.”

The two-ship buy is a contracting strategy the Navy has effectively used in the 1980s to procure NIMITZ-Class aircraft carriers and achieved significant acquisition cost savings compared to contracting for the ships individually. While the CVN 80/81 two-ship buy negotiations transpire, the Navy is pursuing contracting actions necessary to continue CVN 80 fabrication in Fiscal Year (FY) 2018 and preserve the current schedule. Navy plans to award the CVN 80 construction contract in early FY 2019 as a two-ship buy pending Congressional approval and achieving significant savings.