Speaking Thursday during his final State of the Coast Guard address, Zukunft said the icebreaker program is part of a funding pivot point, with a $11.6-billion funding request for Fiscal Year 2019 that will shape the Coast Guard for the next 40 years.

“We are building out the Coast Guard of tomorrow, and to do that we will need 5 percent annualized growth in operations and maintenance account and a $2-billion floor for acquisitions to continue to do so,” Zukunft said.
“It is a small ask, for the smallest armed service whose full appropriation is less than one line item on the appropriations of the other four armed services.”

While Zukunft pointed to several achievements during the past year, securing funding for a new heavy icebreaker represents a fundamental shift in how the Coast Guard advances U.S. policy in the Arctic and Antarctic regions.

“We are trusted in the Arctic to preserve our sovereignty over precious oil and minerals, to ensure access to opening shipping routes, and let’s not forget, to keep our border secure in a region with an emerging U.S. coastline and mounting Russian footprint,” Zukunft said.

Currently, the Coast Guard only has one heavy icebreaker, USCGC Polar Star (WAGB-10), which was commissioned in 1976 – shortly before Zukunft started his 41-year Coast Guard career after graduating from the U.S. Coast Guard Academy in 1977. 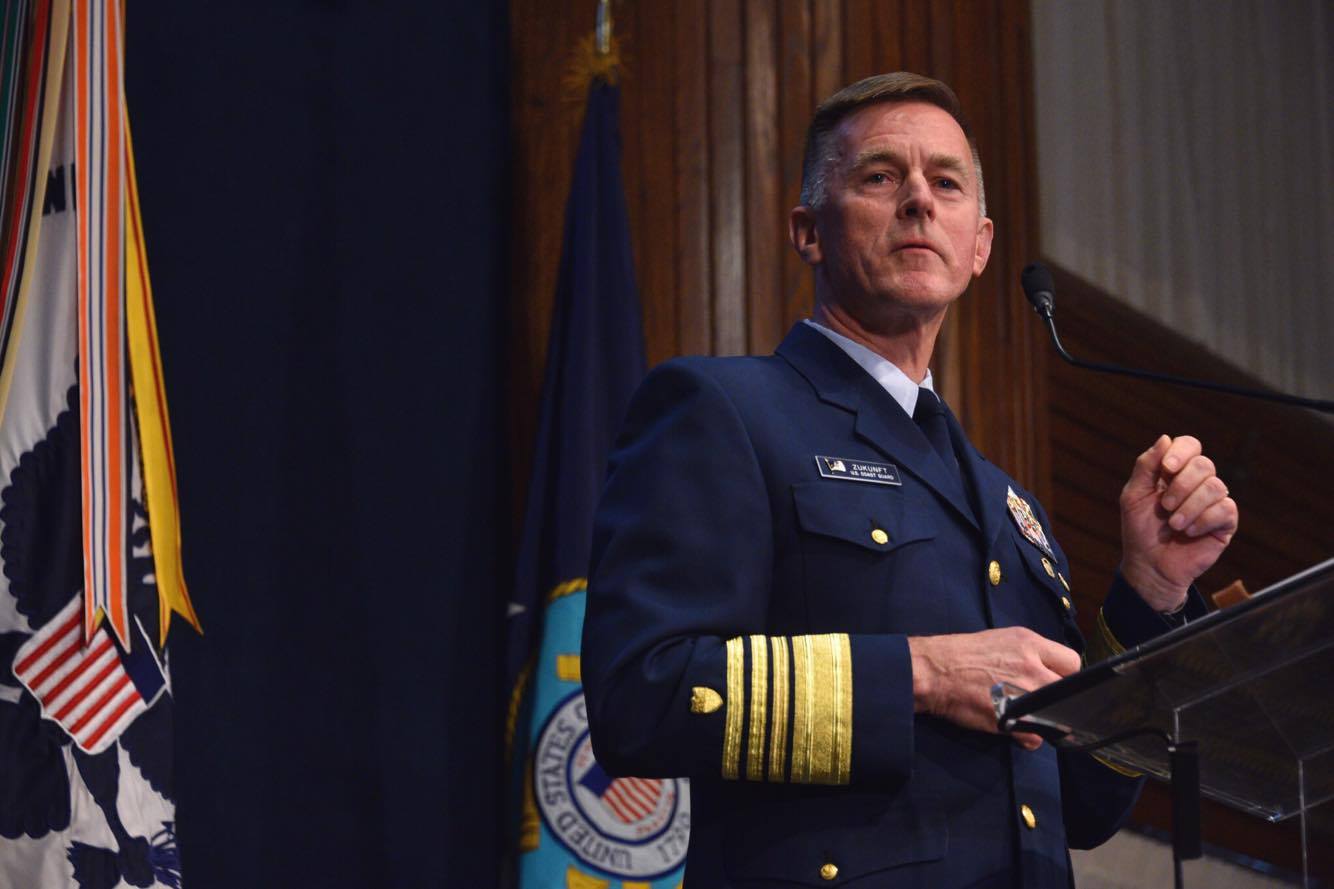 If Polar Star has a major system failure, Zukunft said, the U.S. does not have the capability to recover the vessel. The Coast Guard plans to build three heavy and three medium icebreakers, with the first heavy icebreaker joining the fleet by 2023.

“This isn’t just a request, but the funding is there to match,” Zukunft said.
“We’ve been working this for 20 years now, and we’re finally on the threshold of getting out of the starting blocks.”

Five builders are expected to submit proposals, based on the 1,700-page request the Coast Guard developed. Some of the ship’s design is intended to incorporate an open architecture design philosophy to ease the addition of future systems and capabilities.

The heavy icebreaker was the highlight of Zukunft’s address, but the project is really a high-profile example of the hard sell needed to push for increased Coast Guard funding.

“I directed my senior leaders to abandon the do-or-die suicide squeeze bunt stance when it comes to building our budget and approach the plate by swinging for the fences,” he said. “Seize the initiative.”

The FY 2019 budget request of $11.6 billion is a 7-percent increase from the $10.7 billion request a year earlier – and that FY 2018 budget request was only a mere $2-million bump from 2017. The increased funding, Zukunft said, puts the Coast Guard “on the cusp of making a major dent in our infrastructure backlog – a list that had swollen to over $1.6 billion worth of necessary projects; a sum that would have taken well over a decade to buy down based on past funding levels.” 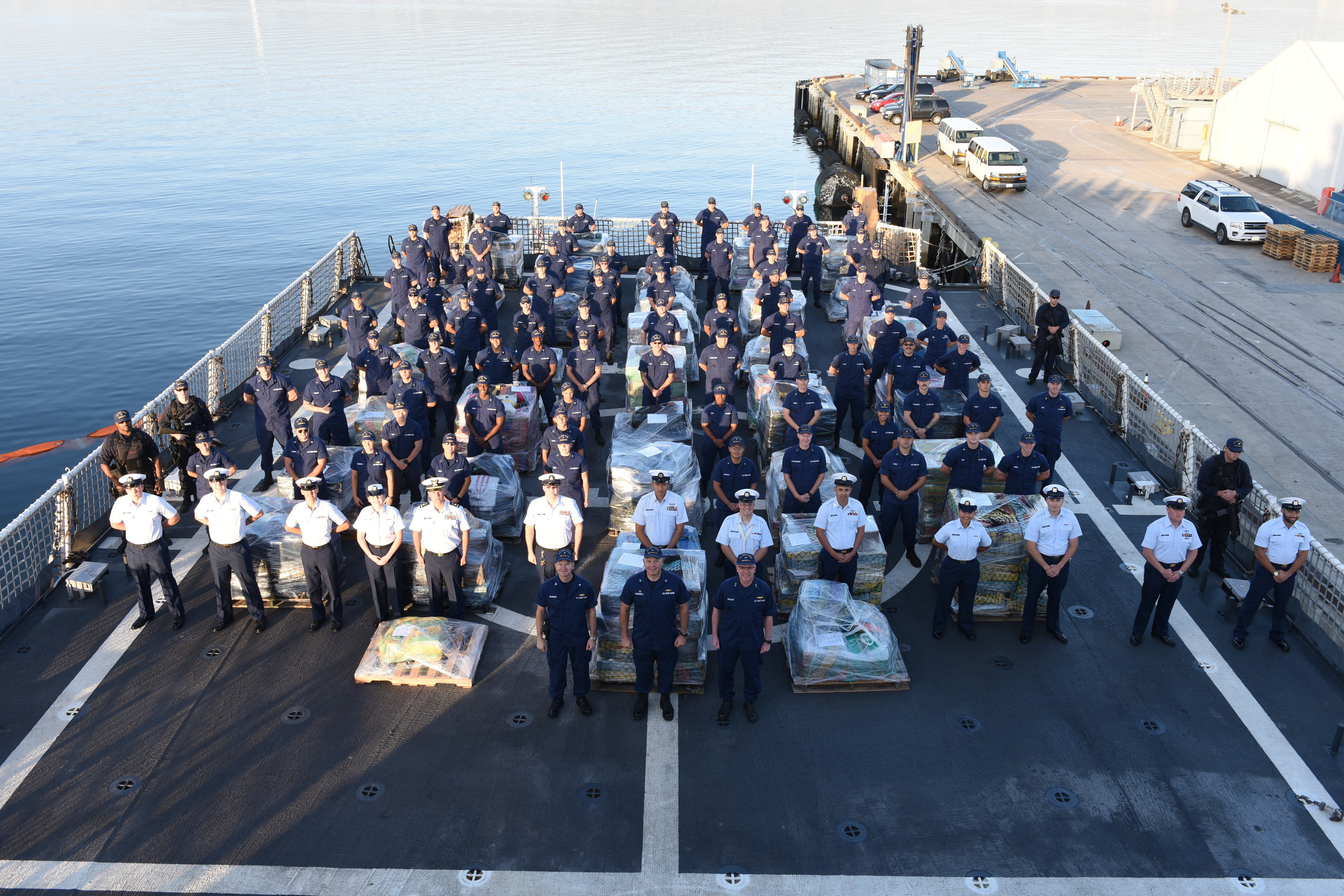 In 2017, the Coast Guard seized more $7.2 billion worth of cocaine and referred 606 smugglers to the U.S. Department of Justice for prosecution, a hit to transnational criminal organizations that Zukunft said “raise havoc and stir civil disorder in the Western Hemisphere.”

Next month, the Coast Guard will work with Mexican and Colombian naval forces to start a combined anti-drug operation, the commandant said, with the hope of eventually creating a more permanent combined task force.

“I’ve got a dozen ships right now in the Eastern Pacific. In the last five nights in a row, we’ve confiscated nearly two tons of cocaine. Five nights in a row. Not one night. Nearly 10 tons in less than a week. Despite all of that, more gets through. We don’t have enough. The United States can’t do this alone.”