The Navy has created a training simulation to recreate the chain of errors that led to the fatal collision of USS Fitzgerald (DDG-62) and a merchant ship off the coast of Japan last year.

The new scenario on the Surface Warfare Officer School bridge simulator takes radar data, ship tracks and other open source information and recreates for SWOS students the experience of being on the bridge of the destroyer in the minutes leading up to the collision with ACX Crystal, which resulted in the death of seven sailors, SWOS commander Capt. Scott Robertson told USNI News last week.

The simulation will not only serve as a tactical primer but also serve to change a culture that made collisions like that of Fitzgerald and fatal August collision of USS John S. McCain (DDG-56) possible.

“I suspect that every student will have to go through the Fitzgerald learning experience,” Robertson said.
“With a combination of having access to Fitzgerald’s speed and heading logs in combination with access to Crystal’s radar, we were able to reverse engineer [the scenario]. We’re pretty close to it.”

Other parts of the service have their own lore to enforce a culture of safety. Submariners have the loss of the attack boat USS Thresher (SSN-593) and all 129 sailors aboard, which led to the creation of the SUBSAFE program that governs operations of the nuclear submarine force. Aviators created an aggressive debriefing and safety culture following thousands of deaths as the service learned to operate jet aircraft at sea.

“The aviators and the submarines have that monumental moment that really sets the culture piece,” Robertson said.

The work on the prototype follows a simulation staple at SWOS — the 2012 collision of USS Porter (DDG-78) in the Persian Gulf.

For about 30 minutes, students watch on a 360-degree bridge simulator in Newport, R.I., as the guided-missile destroyer Porter (DDG-78) transited the Strait of Hormuz on Aug. 12, 2012, and cuts across the bow of two oil tankers, unaware of the positions of the two larger ships, before the destroyer collides with one of the two tankers.

Not only can the students see representations of the tankers moving closer to the warship, they can hear the recordings from the bridge as a confused crew attempts to clear out of the way of the massive merchant ships. Both junior sailors headed to their division officer tour and prospective department heads have to sit through the simulation.

“This is the first time that we can recall that there’s an incident with a Navy ship that we’ve been actually able to hear exactly what was going on on the bridge – the communication between the commanding officer and the rest of the bridge team,” Robertson said.
“The audio piece is so important. You can watch a scenario silently unfold and you can simulate a scenario unfold, but when you have the voiceover and hear the human element of what’s going on — it’s a powerful emotional experience.” 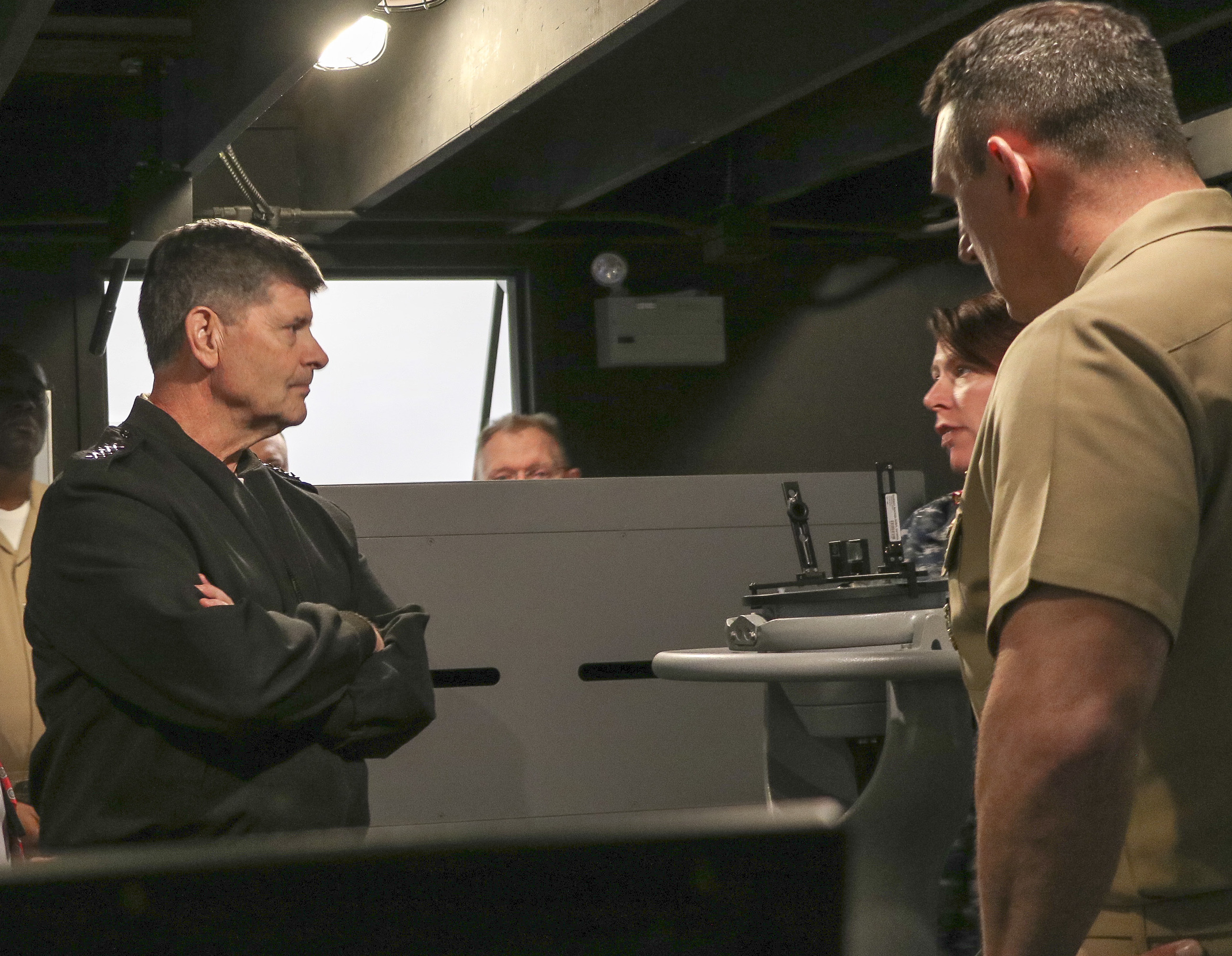 Vice Chief of Naval Operations Adm. Bill Moran listens as staff members from Surface Warfare Officers School (SWOS) explain the functions of the full bridge simulator and how it is incorporated into the surface warfare continuum of training. US Navy Photo

In January, Vice Chief of Naval Operations Adm. Bill Moran visited SWOS in Rhode Island and sat through a prototype of Fitzgerald simulator.

“It’s real and it’s in real time and you can walk through it and get a really good sense of what did and didn’t go right that early morning,” Moran told USNI News in a Pentagon interview earlier this month.
“Those are very impactful training opportunities, but we just have to get that training out to everybody. Right now we’ve got it in one simulator, but that simulation should be available to everyone who drives ships for a living, and I think what I took away from that experience is the absolute value of having a team that’s working together.”