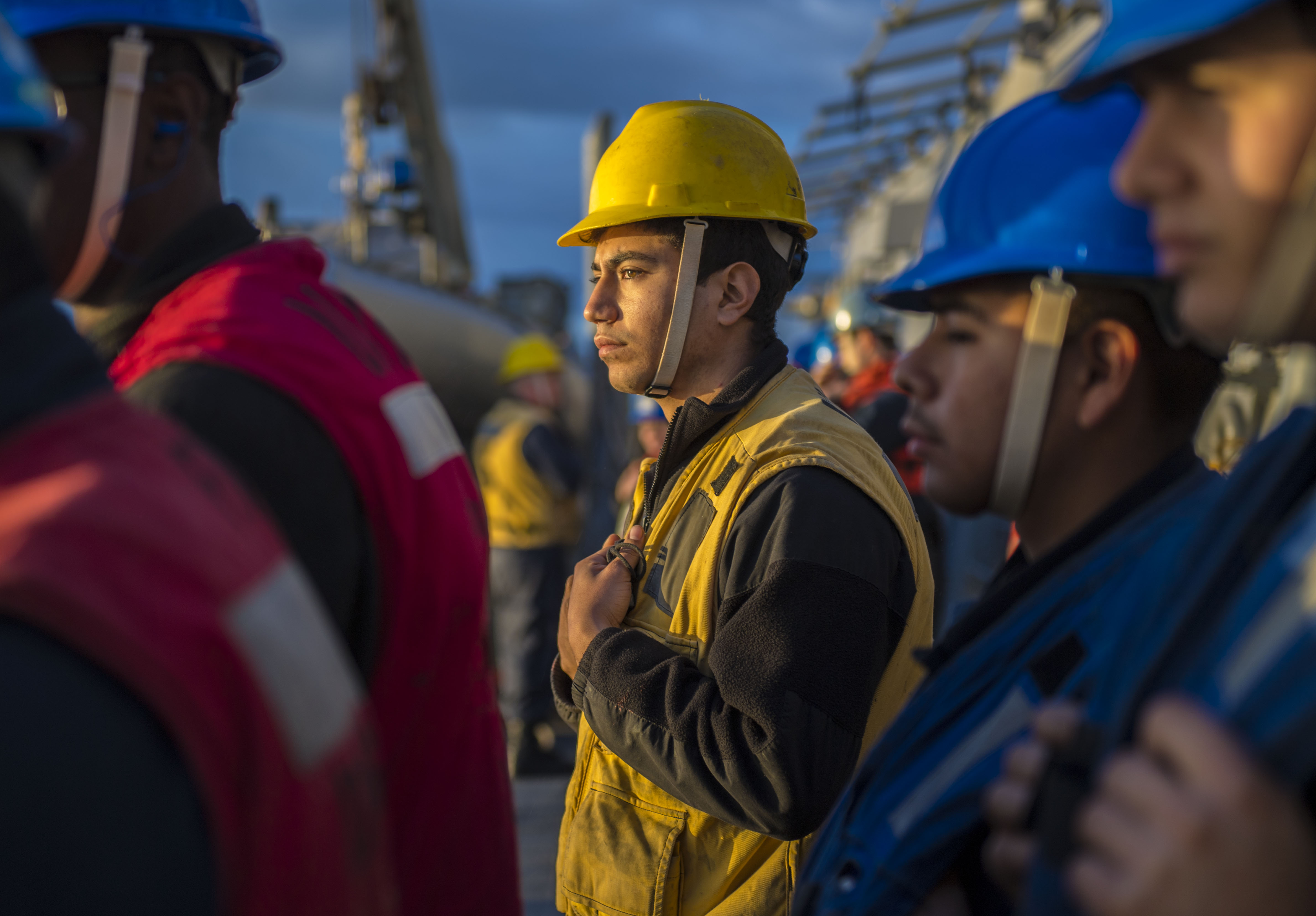 The Navy wants to stretch tour lengths for much of its forward-deployed forces, a proposal that would provide more unit stability, cohesion, continuity and reduce the costs of moving personnel in sea-duty units.

The Chief of Naval Personnel, Vice Adm. Robert Burke, submitted the request to the office of the undersecretary of defense for personnel and readiness in November, following initial discussions by senior naval leaders in September, a CNP spokesman told USNI News.

The request for an exception to the military’s personnel assignment policy is “awaiting a response,” Lt. Rick Moore, a chief of naval personnel spokesman, said Friday. It’s unclear when a final decision, or perhaps tweaks to the request as OSD reviews the proposal, would be made.

The proposal “would give the Navy the authority to assign sailors on sea duty in FDNF forces – that’s Japan, Guam and Spain – that would match their prescribed sea tour up to a maximum of 48 months,” Moore said.

“The main goal is for air, sub and surface (communities) to provide greater continuity by reducing personnel turnover through longer tours,” he said, adding “it only applies to sea-duty units.”

FDNF officer tours normally range between 18 and 36 months and it can vary based on the classification of the tours, whether they’re on a Division Officer tour or are a Department Head, XO, CO, Moore said. First-term sailors, whether they’re coming in from recruit training and “A” schools, normally do a 36-month tour, and follow-on tours are normally 24 months for unaccompanied and 36-months for accompanied, he said.

“As of now, we do expect the officers will serve their tour lengths that are required for their career milestones – that is, for Division Officer, Department Head, CO/XO,” he said.

“The proposal wouldn’t just be specifically for Japan,” Moore said, adding “the same policy would affect all forward naval forces, as a general rule.” The proposal, as submitted, would impact FDNF sea-duty personnel in Guam and Rota, along with Japan.

Burke mentioned the proposal during a January visit to Japan, where he spoke during the Career Development Symposium in Yokosuka. Shorter tours require more personnel rotations, which “puts the commands in a state of continuously having to train up their people and not having a seasoned, experienced crew that can train up the new junior folks,” he said during a town hall meeting, according to Stars and Stripes.

“We want to get impact and feedback from the fleet,” Moore told USNI News. Among issues raised during symposiums and town hall meetings is accompanied and unaccompanied tours, especially of first-term personnel who get unaccompanied orders. “It is something that we are actively looking into,” he said, noting that CNP is looking at it separately from the longer-tours proposal.

The proposal came on the heels of findings in the Navy’s investigations into collisions and at-sea incidents involving surface ships in the 7th Fleet region, including the separate deadly collisions involving USS Fitzgerald (DDG-62) and USS John S. McCain (DDG-56). Among issues cited in the Navy’s investigation report, released Nov. 1, were deficient and ineffective training, unprepared crews, poor communication, and ineffective command and control.

Reducing personnel turnover with longer tours is seen as one way of building continuity and cohesion among units, particularly sea-going FDNF crews with higher operational tempo than units rotating overseas from their stateside homeports.

Cost savings is another potential benefit. The average PCS cost for accompanied and unaccompanied sailors to Japan is $11,157, for a sailor on PCS orders to Japan, Moore said, citing Navy data.

“The Navy does not anticipate any increased PCS costs for longer tours, and the potential PCS costs savings are still being assessed,” he added.

A 2016 survey and report completed by RAND, Corp., for OSD (P&R) in response to a congressional inquiry looked at overseas tours and permanent-change-of-station moves and found the military services would save money by reducing the number of annual PCS moves, with one option being extended tours. The report found that while 59 percent of service members surveyed – including Navy personnel – wouldn’t want to extend their tour voluntarily, 41 percent would do so. It also found that some of the 59 percent might willingly extend with some financial incentive.

The Navy uses several incentives to get personnel to voluntarily extend their time overseas. One program is the Overseas Tour Extension Incentive Program, or OTEIP, which as of January 2016 had 2,537 personnel “who requested and were approved for voluntary extensions,” Moore said.

Financial incentives include Assignment Incentive Pay, which the Navy enables service members to bid for hard-to-fill billets. That 2016 report found: “the Navy’s experience with the AIP program has been successful along a number of dimensions, and there are reasons to believe that the benefits that accrued to the Navy would also apply if auctions were used to assign tour length extensions across all services.”