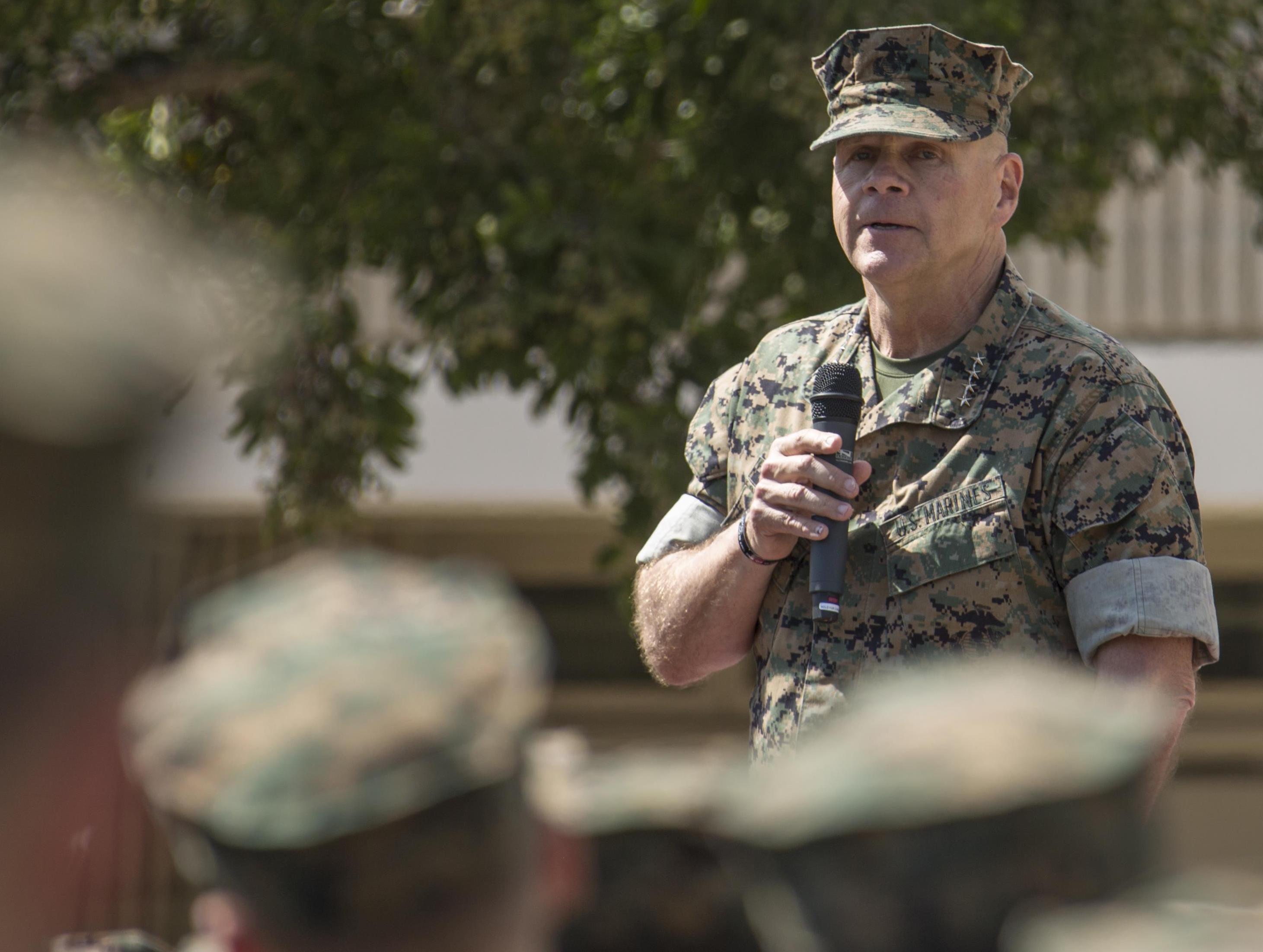 Commandant of the Marine Corps Gen. Robert B. Neller speaks to Marines with School of Infantry West, at Marine Corps Base Camp Pendleton, Calif., April 26, 2017. US Marine Corps Photo

WASHINGTON, D.C. – Ongoing continuing resolutions and budget uncertainty are hampering the Marine Corps’ ability to buy new equipment efficiently and bring in new recruits to increase the size of the force, the commandant said today.

Gen. Robert Neller said the Marine Corps has money but finds itself forced to waste it through things like the government shutdown earlier this week – where reserve units over the weekend reported for duty and were sent home, and employees were paid to not work on Monday – and lost opportunities to save money in multiyear procurement contracts. Neller did not name specific programs but said the service needed multi-year budget stability to allow for good contracts that leverage economies of scale.

Speaking at an event co-hosted by the Center for Strategic and International Studies and the U.S. Naval Institute, the commandant said the “uncertainty that hangs over you like a cloud” also affects how people spend money in the operations and maintenance and personnel accounts.

“The problem that we had last year is we got the budget in April, so the delta between what we had in the [continuing resolution] from the previous fiscal year and what we got in the budget was a pretty substantial amount of money – so then you find yourself like, okay, we’ve got to spend what we’re spending, plus we’ve got to spend $30 million more every day to spend this money that we’ve got now with six months left to go, that if we could have got it at the beginning of the year we could have spent it in a more logical pattern,” Neller said.

In the current Fiscal Year 2018 budget plans, which have yet to be passed by Congress, “part of the money was to increase the size of the force, and if we don’t get the money – you know, I can’t tell the recruiters not to recruit and then we get the money, so we’ll have to figure out how to push (money) around to do that, because we were in the budget … going to get a thousand more Marines, and I really want to spend that money to go buy those Marines.”

Though the Marine Corps cannot control how promptly it receives appropriations bills or how far out it can project spending top lines, the service can take steps to make the most of procurement dollars given. Neller said the service was embracing experimentation as a means of reducing risk and buying smarter.

“You do a bunch of little things and you figure out which ones have potential, and then that’s where you put the rest of the money,” he said, noting that new Navy acquisition chief James Geurts comes from a background of procurement at U.S. Special Operations Command where this type of smart and rapid acquisition – through the use of prototyping, plus leveraging what other services were already working on – is encouraged.

Also at the event, Neller said the new National Defense Strategy from Defense Secretary James Mattis preserves the Marines’ role as a forward-deployed crisis-response force, and it supports the Marines’ plans to evolve how they participate in maritime theaters like the Pacific.

“We know that we need the Navy to be able to do what we need to do in that particular area of operations, and we’ve got to make sure everyone understands we’re part of sea control, we’re part of movement of the force,” Neller said.
“Every ship out there, whether it’s a DDG or an LPD or a big-deck amphib or a carrier or submarine, they have to be netted, they have to communicate with each other, they have to have some ability for strike and defense, there’s got to be some sort of ability to deceive as to what your location is, so that’s part of this discussion about how we operate as a maritime force.”

“We’ve realized there are certain capability things we’re going to need to improve on. We need more mobility, so we’re going to need ships, but the ships have to have survivability, they’ve got to be able to operate in electromagnetic denied environment, they have to have some level of air defense or have somebody provide the air defense for them,” Neller continued.
“We’re going to have to have longer-range precision fires because a lot of the [anti-access/area-denial] capability set is long-range. Most major potential adversaries out there have a fairly effective anti-ship coastal defense cruise missile capability. I’m working to try to get that capability for us. We’ve got long-range shooters off ship, but once we get ashore, and I think the Army is in the same place,” the Marines need long-range weapons to support their operations on land and to support sea control from the shore.