When the Navy charged the commanders of two guided-missile destroyers involved in a pair fatal 2017 collisions with merchant ships, its intent is to hold leaders accountable, but history shows securing a conviction is hardly a sure thing.

Cmdr. Bryce Benson, former commander of USS Fitzgerald (DDG-62), and Cmdr. Alfredo J. Sanchez, former commander of USS John S. McCain (DDG-56), face dereliction of duty, hazarding a vessel and negligent homicide charges related to the collisions that resulted in the deaths of 17 sailors. A chief petty officer from McCain also faces a dereliction of duty charge that has already been preferred. Additional administrative actions are being conducted for members of both crews including non-judicial punishment for four Fitzgerald and four John S. McCain crewmembers.

The Navy has experienced several serious incidents, including collisions and fires resulting in damage to ships, injuries and deaths. The following incidents reviewed by USNI News, involved scenarios similar to those leading up to the McCain and Fitzgerald collisions, resulted in deaths, injuries or both. 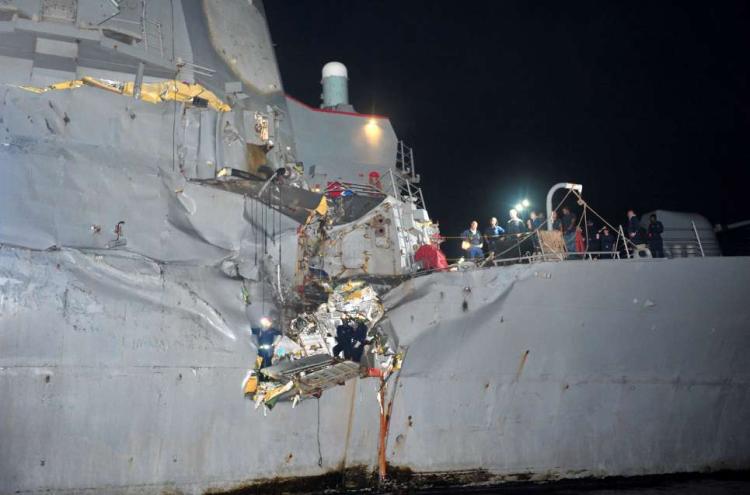 USS Porter following a collision in 2012 in the Strait of Hormuz. US Navy Photo

Guided-missile destroyer USS Porter (DDG-78) collided with Japanese-owned oil tanker MV Otowasan in the Strait of Hormuz, in an incident that did not result in any injuries but did damage the ship, according to Reuters.

Cmdr. Martin Arriola, Porter’s commanding officer, was relieved of command, and the case was referred to Admiral’s Mast for non-judicial punishment. Arriola received a punitive letter of reprimand for his actions during the collision. 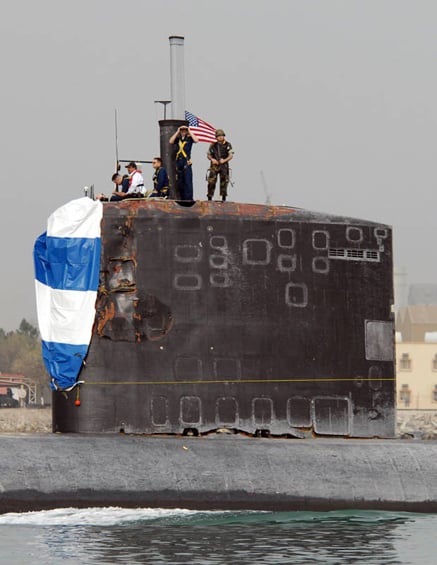 On March 20, 2009, nuclear attack submarine USS Hartford (SSN-768) was traveling at periscope depth in the Strait of Hormuz and collided with amphibious transport dock USS New Orleans (LPD-18). According to a Navy press release at the time, Hartford’s sail, periscope and bow plane were damaged in the incident. New Orleans suffered an approximately 16-foot-by-18-foot hole to its fuel tank. No injuries were reported on New Orleans, and 15 sailors were injured on Hartford.

A Navy investigation concluded the crew on Hartford was to blame for the collision, and Hartford commanding officer Cmdr. Ryan Brookhart was removed. Non-judicial punishment was recommended for Brookhart, the executive officer and several other crew members. 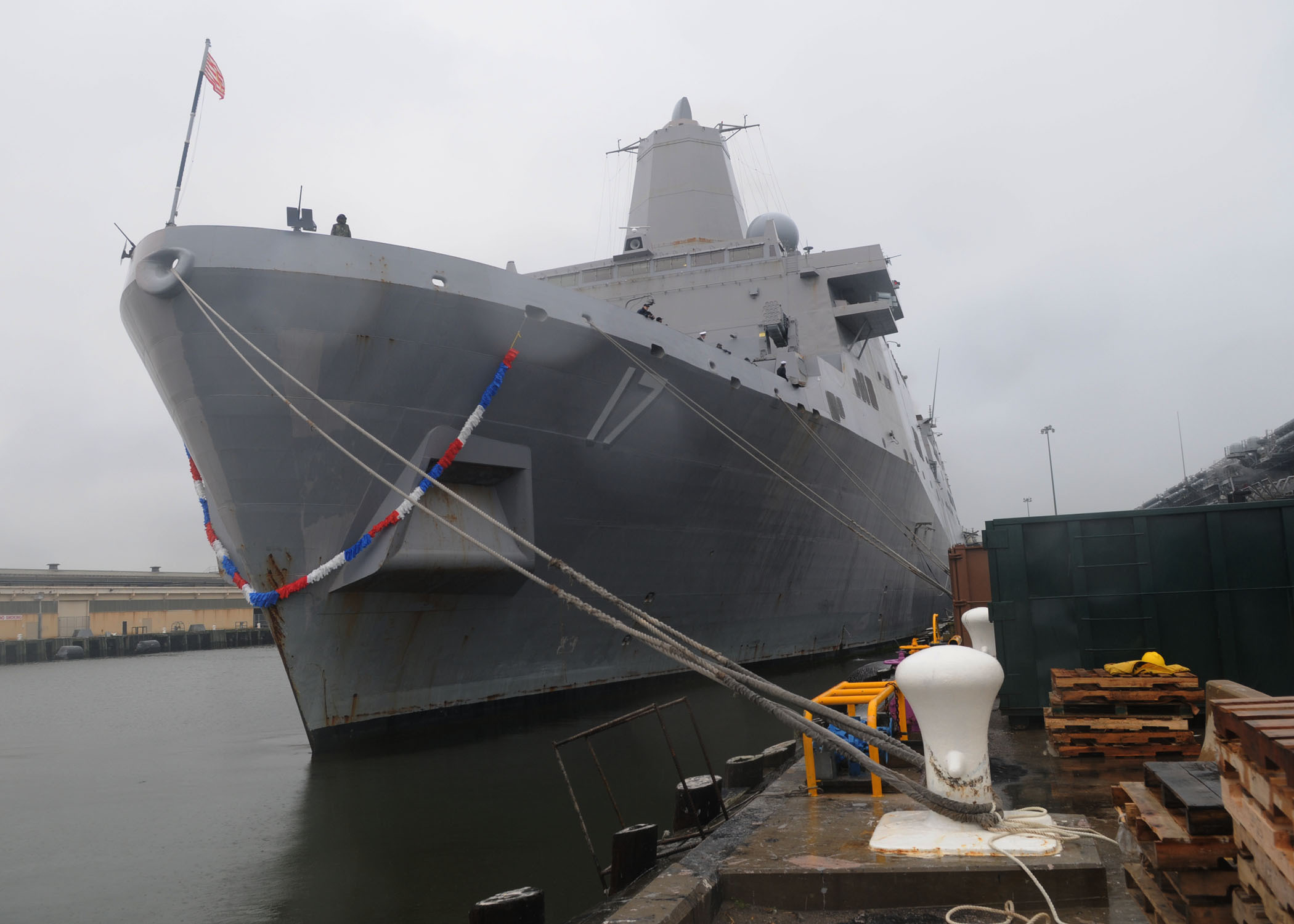 The amphibious transport dock ship USS San Antonio (LPD 17) is moored to a pier at Naval Station Norfolk after returning from a seven-month deployment that began in 2009. US Navy Photo

A sailor drowned after being thrown into the sea when an 11-meter rigid hull inflatable boat (RHIB) flipped while being lowered into the water from amphibious transport dock USS San Antonio (LPD-17) on the first-in-class ship’s initial deployment. At the time, San Antonio was operating in the Gulf of Aden.

Ship commander Cmdr. Eric Cash received a letter of reprimand. The amphib’s executive officer, Lt. Cmdr. Sean Kearns, was found not guilty of negligence. Kearns had transferred from the ship when the Navy decided to levy a punishment. Instead of accepting non-judicial punishment, Kearns opted to fight a single charge of negligence in a military court. During the trial, according to news reports, his lawyers presented information detailing how, at the time of the incident, San Antonio remained an unfinished vessel with thousands of faulty welds, engine trouble and only a portion of the standard technical manuals typically found onboard. Kearns’ promotion to commander, which had been delayed pending the trial, took effect after the verdict. 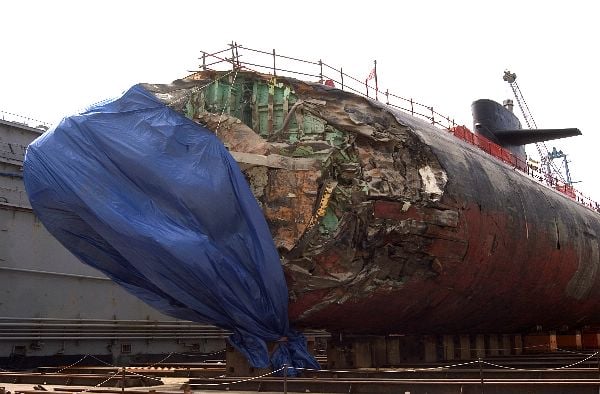 On Jan. 8, 2005, while submerged to 525 feet, USS San Francisco (SSN-711) struck an undersea mountain at full speed near its homeport of Guam. One sailor died after suffering a head injury in the incident, and 97 members of the 137-member crew were injured.

San Francisco commanding officer Cmdr. Kevin Mooney was removed from his command and was issued a letter of reprimand for failing to implement “several critical navigational and voyage planning procedures,” according to a Navy statement reported by Stars and Stripes in 2005. after the hearing.
“By not ensuring these standard procedures were followed, Mooney hazarded his vessel.”

Six other crew members received punishments including letters of reprimand and reduction in rank. 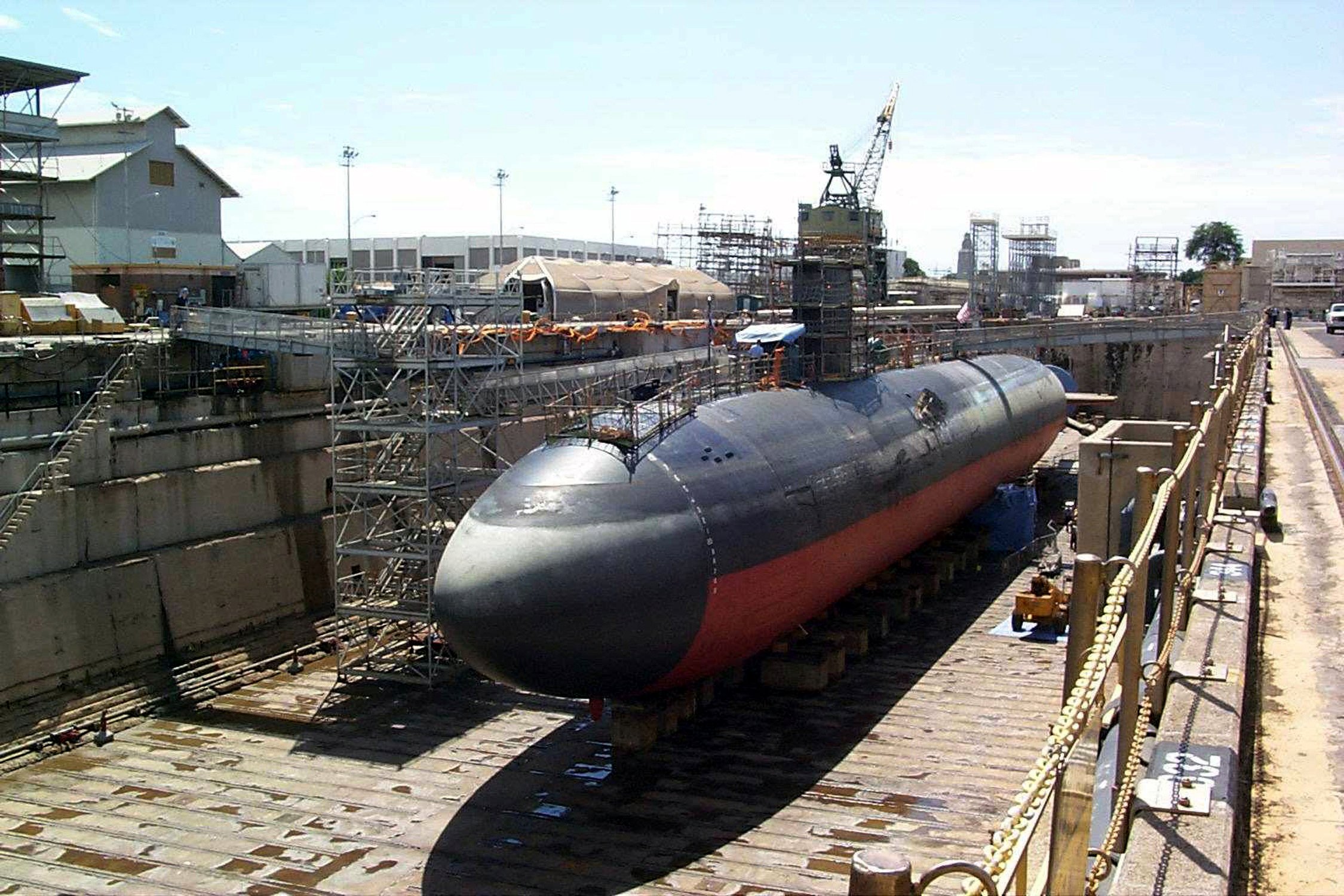 A Navy investigation did not recommend bringing Greenville commanding officer Cmdr. Scott D. Waddle or Fire Control Technician First Class Petty Officer Patrick Seacrest to trial because of what investigators considered an absence of any criminal intent or deliberate misconduct on their part. Instead, Waddle and Seacrest were referred to non-judicial punishment. The investigation recommended the new commanding officer issue admonishments to other crew members and required some to be re-qualified to perform their duties aboard submarines. 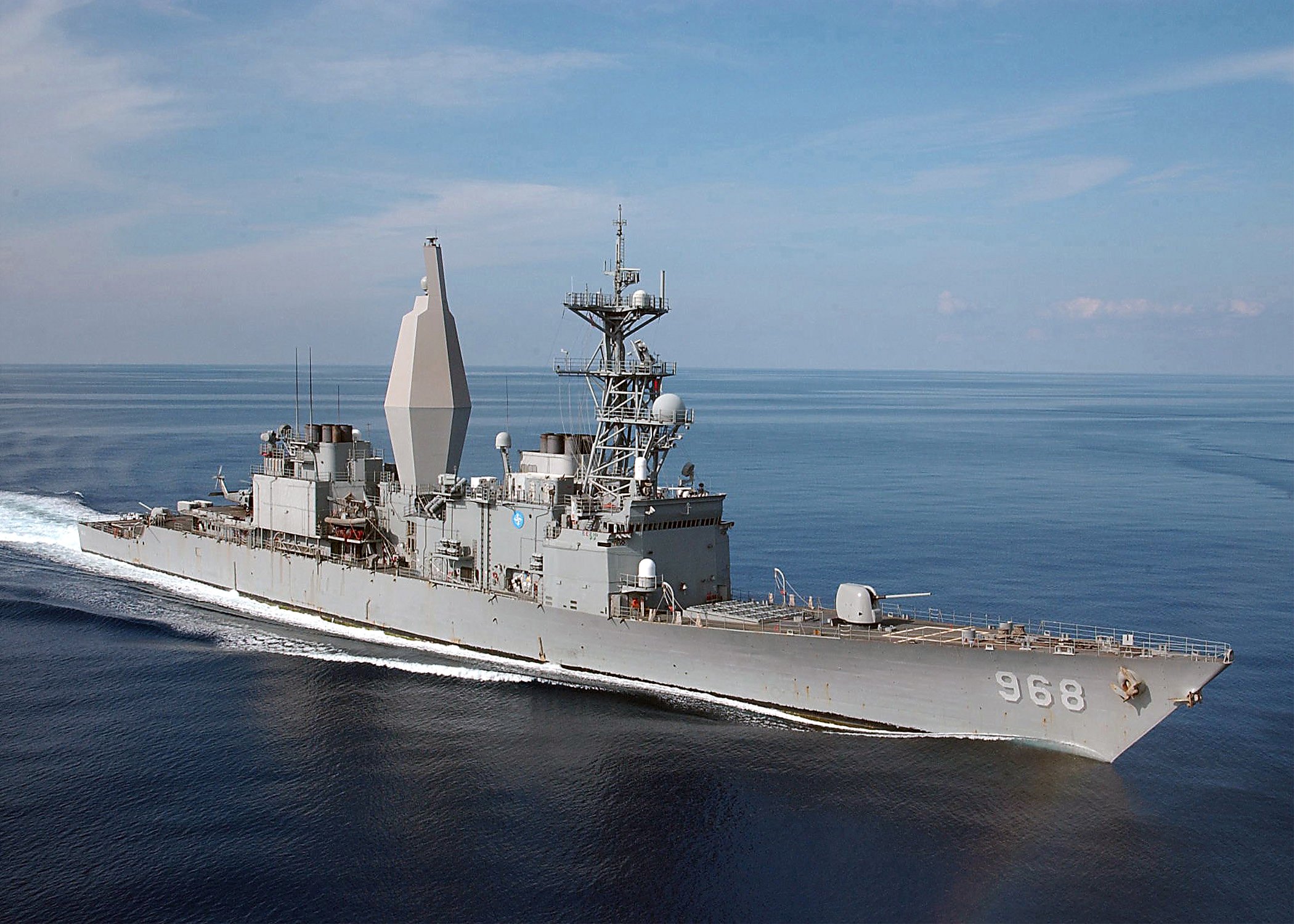 On Feb. 5, 1999, the USS Arthur W. Radford (DD-968) collided with a Saudi container ship approaching the Chesapeake Bay. One sailor suffered a broken arm, and the ship was severely damaged, according to news reports.

Radford commanding officer Cmdr. Daniel W. Chang was relieved of command after the incident. Chang was offered the choice of proceeding to trial or receiving a non-judicial punishment and opted for non-judicial punishment. He received a punitive letter of reprimand. Later, Chang tried suing the Navy, claiming a violation of privacy when his name was released to the press in relation to the collision investigation. The case was dismissed. 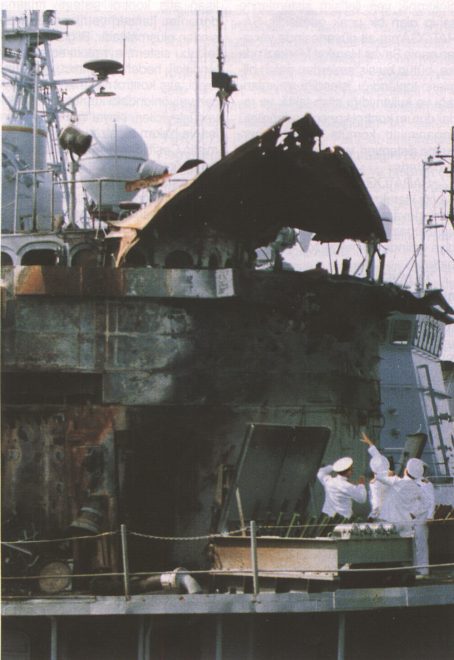 Photos of the damage to the Turkish warship TGC Muavenet

Shortly after midnight on October 1, 1992, during exercises in the Aegean Sea, a Navy investigation found the USS Saratoga (CV-60) mistakenly launched two NATO Seasparrow missles at the Turkish destroyer TCG Muavenet (DH-357) when sailors aboard Saratoga were awakened and thought a drill was an actual attack. The missiles hit Muavenet’s pilothouse, resulting in the death of five sailors including the ship’s commanding officer, and 14 other Turkish sailors were injured.

Saratoga’s Commanding Officer, Capt. James M. Drager, and six other officers and enlisted sailors received non-judicial punishment. In Drager’s case, according to news reports, the reprimand he received eliminated any chance at promotion to flag officer. 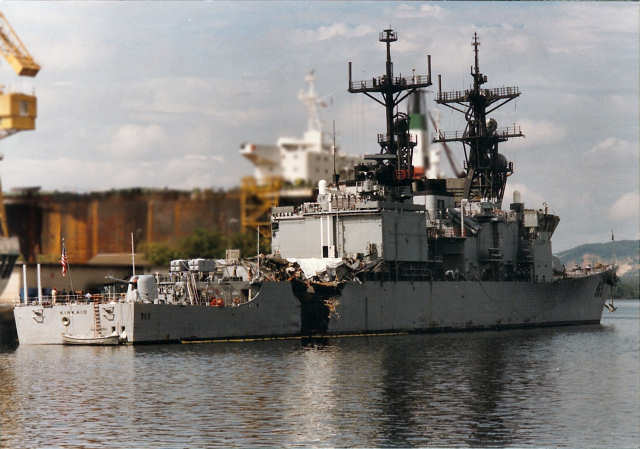 USS Kinkaid shortly after its collision with M/V Kota Petani. Image via mboyd.com

Before dawn on Nov. 12, 1989, USS Kinkaid (DD-965) collided with container ship M/V Kota while transiting the Strait of Malacca near Singapore. The collision resulted in one death and 15 injuries aboard Kinkaid.

A Navy investigation recommended a court martial for Cmdr. John Cochrane, Kinkaid’s commanding officer, and Lt. j.g. Steven Michael Williams, the ship’s officer of the deck. Williams was convicted when he entered a plea of guilty of negligent dereliction of duty and of negligently hazarding a vessel. He was sentenced to receive a letter of reprimand and was dismissed from the Navy. Two months after the collision, Williams was diagnosed with Hodgkins disease. Cochrane was found not guilty of criminal negligence after a trial in 1990. 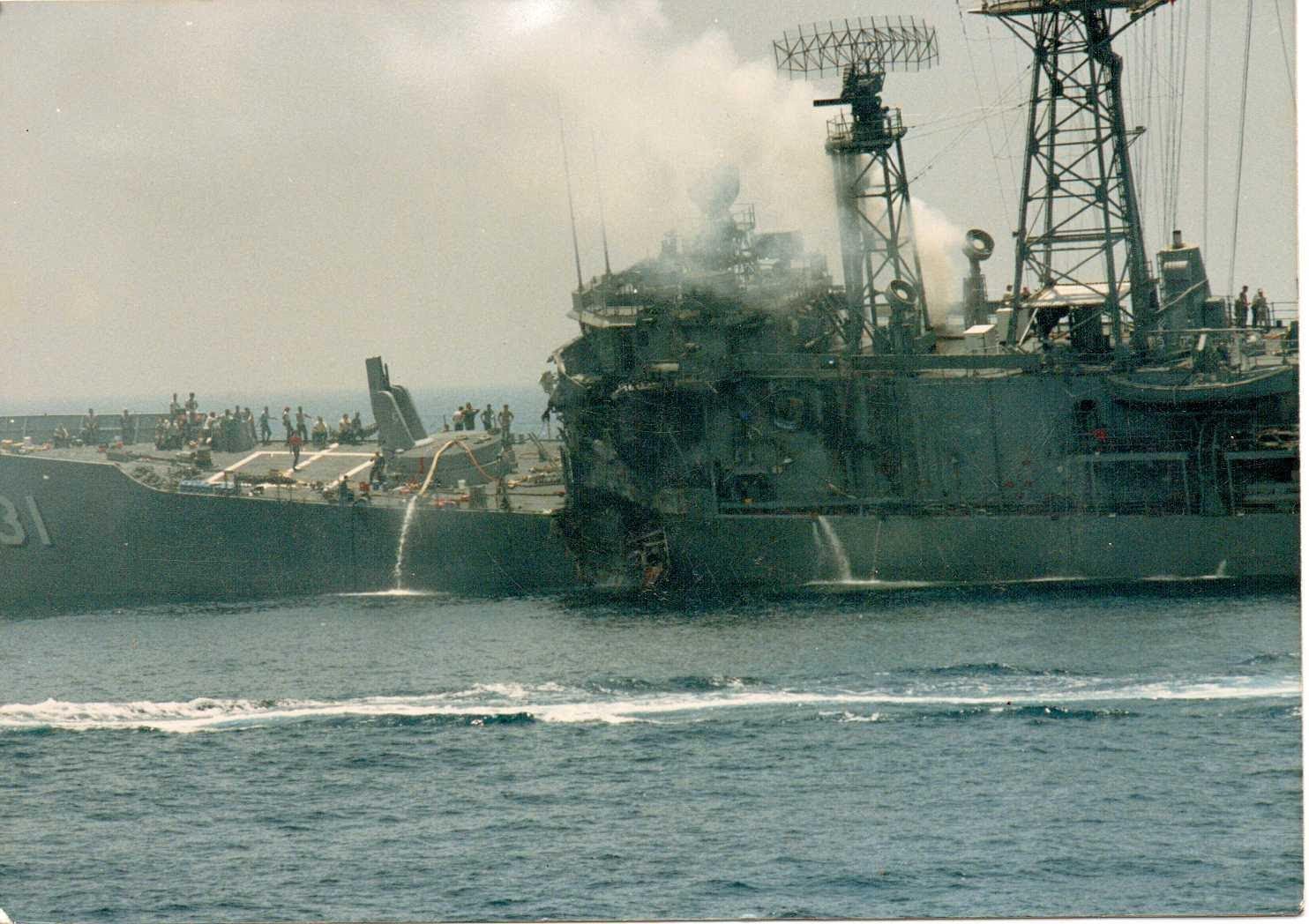 A view of damage sustained by the guided missile frigate USS Stark (FFG-31) when it was hit by two Iraqi-launched Exocet missile while on patrol in the Persian Gulf in 1987. US Navy Photo

While patrolling along in international waters near Bahrain on May 17, 1987, an Iraqi F-1 Mirage fighter jet fired two Exocet anti-ship cruise missiles at USS Stark (FFG-31), setting the ship on fire in an incident that killed 37 sailors. Iraq claimed the incident was an accident.

A Navy investigation recommended bringing Capt. Glenn R. Brindel, the ship’s commanding officer, and Lt. Basil E. Moncrief, the ship’s tactical action officer, to court-martial. Investigators recommended referring Cmdr. Raymond Gajan Jr., the ship’s executive officer, to non-judicial punishment. All three were removed from command, but instead of going to trial, Brindel and Moncrief received letters of reprimand, according to news reports. Brindel retired from the Navy as a commander, and Moncrief resigned his commission. The Navy took no action against Gajan. 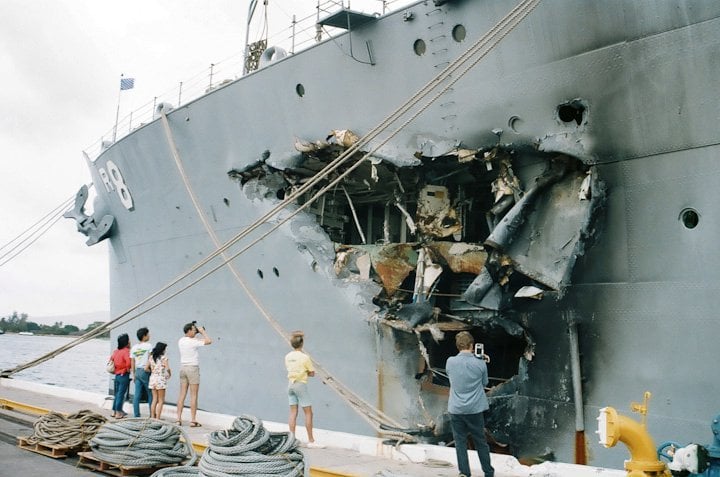 On Feb. 10, 1986, repair ship USS Jason (AR-8) collided with Navy oiler USS Willamette (AO-180) while attempting to join a formation centered around Willamette during a sail to Pearl Harbor, Hawaii. One sailor was killed in the incident. A Navy investigation placed the blame for the collision on Jason’s commanding officer for failing to recognize the risk of collision. The captains of both ships were removed from of their commands.

The night of Nov. 22, 1975, while operating with USS John F. Kennedy (CV-67) in the Ionian Sea, USS Belknap (CG-26) turned into and collided with Kennedy. Fuel spilled from Kennedy ignited on Belknap, causing the aluminum structure to melt. Eight sailors were killed, 48 were injured in the incident. 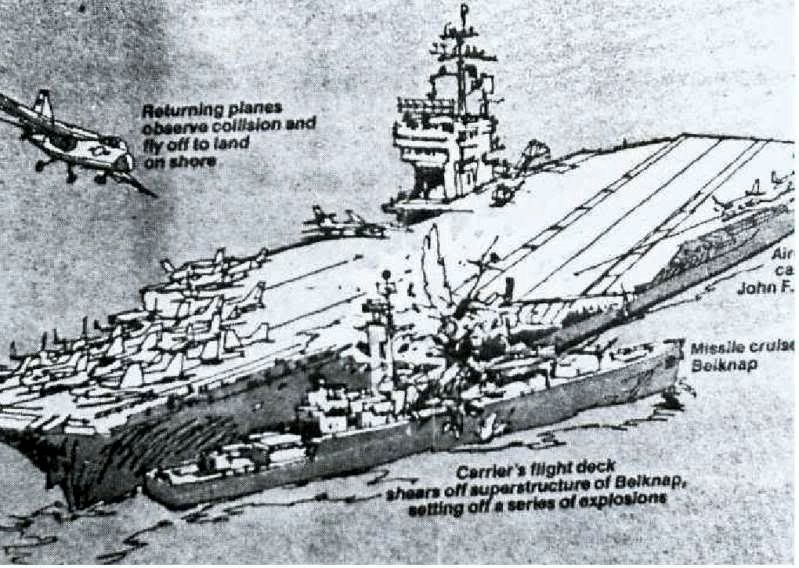 Following a Navy investigation, Capt. Walter R. Shafer, the ship’s commanding officer, was referred to trial by court-martial and was acquitted of all charges and specifications. Lt. j.g. Kenneth M. Knull, the ship’s officer of the deck, was also tried by general court-martial and convicted of three separate charges. The judge in the case declined to impose any punishment. 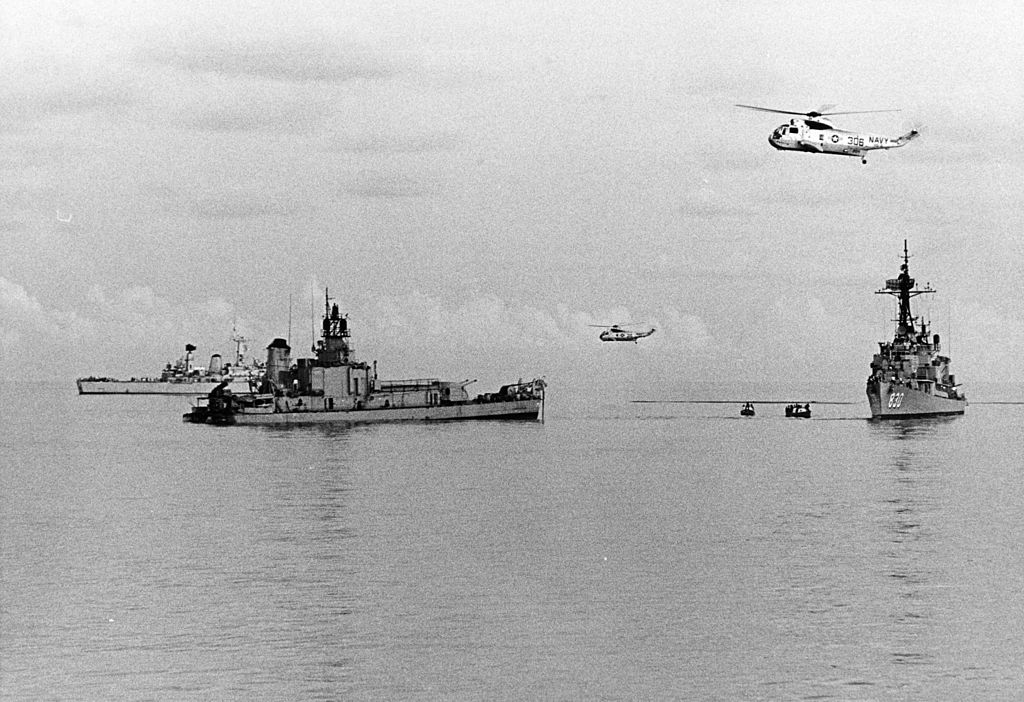 At about 3 a.m. on June 3, 1969, while participating in SEATO exercises in the South China Sea, Sumner-class destroyer USS Frank E. Evans (DD-754) was cut in two when it crossed in front of the much larger Australian Majestic-class light carrier HMAS Melbourne. Part of Evans sunk and 74 sailors were killed.

Following a Navy investigation, Evans’ commanding officer and officer of the deck were charged with dereliction of duty and hazarding a vessel. The officer of the deck plead guilty to the before a general court-martial convened, and instead received non-judicial punishment of a letter of reprimand.

Evans’ commanding officer entered a plea of not guilty to dereliction of duty and negligently hazarding a vessel. He was found guilty in a general court-martial and sentenced to a letter of reprimand. The incident was outlined in the 1975 Navy training film, I Relieve You, Sir.

Melbourne’s commanding officer was tried by an Australian military court on charges of negligence to avoid the collision. He was acquitted.

On July 30, 1945, USS Indianapolis (CA-35) was sunk by a Japanese submarine torpedo attack after the ship had delivered the atomic bomb components to the Pacific island of Tinian. Of the roughly 800 crewmembers who entered the water, 320 were rescued. A Navy court of inquiry was convened to investigate and recommended that Capt. Charles McVay be court-martialed for hazarding his vessel by failure to zigzag and failure to abandon ship in a timely manner. Indianapolis sank in 12 minutes. 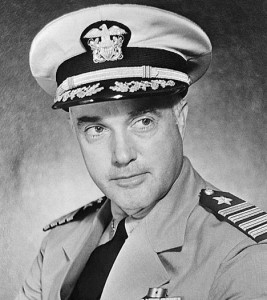 Adm. Chester Nimitz disagreed and issued a letter of reprimand, but then-Chief of Naval Operations Adm. Ernest King overturned Nimitz’s decision, recommending the court-martial commence. McVay was convicted of negligence, but his sentence was remitted in 1946. He served in the Navy until 1949, retiring as a rear admiral. Still, family members who blamed McVay for the sinking continued to harass him until he took his own life in 1968. After a prolonged campaign from friends and family, McVay was officially exonerated of blame for the sinking by an act of Congress in 2000.