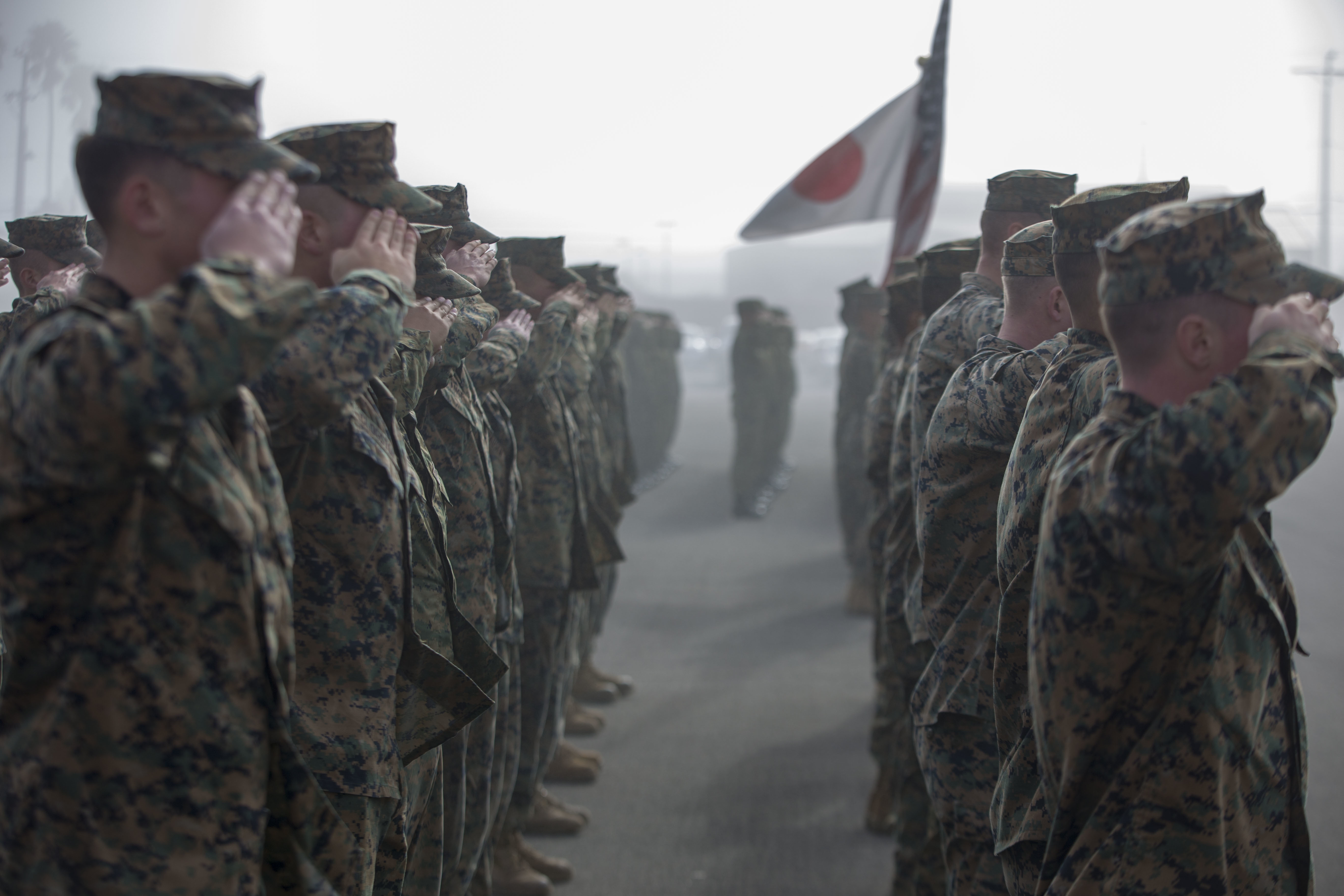 Over the next month, 350 soldiers with the Japan Ground Self Defense Force will train closely with Marines to hone skills that will run the gamut from amphibious reconnaissance and fire-and-maneuver assaults to close-air support and staff planning. They will fire mortars and artillery, land on beaches aboard rubber boats and assault craft and attack and defend “friendly” land from foes in various training scenarios.

The soldiers are members of Western Army Infantry Regiment, a light infantry force that Japan has tasked with creating the first brigade of sea soldiers – with the goal to be ready by April 1, 2018 – that can conduct amphibious operations ultimately as part of a broader “dynamic joint defense force.”

This year’s Iron Fist exercise – it runs from Jan. 12 to Feb. 12 – marks the 13th iteration of the annual training that focuses on amphibious operations, with I Marine Expeditionary Force as a primary host.

With a 2012 decision by Japan to create amphibious rapid deployment brigades, Iron Fist’s training focus has shifted toward building that “go-to” force, as envisioned, to quickly respond when needed to protect Japan’s many islands from threats and harm, whether to its national security or from natural disasters.

Officials from both countries tout the continuing, growing relationship and partnership among the various branches of the U.S. military and self-defense force. “We live in a very dangerous and complex world. There are numerous threats aimed at the United States. It is truly reassuring to work together,” Col. Fridrik “Fred” Fridriksson, the 11th Marine Expeditionary Unit commander, said in a short speech to the crowd gathered at a Camp Del Mar parade ground. 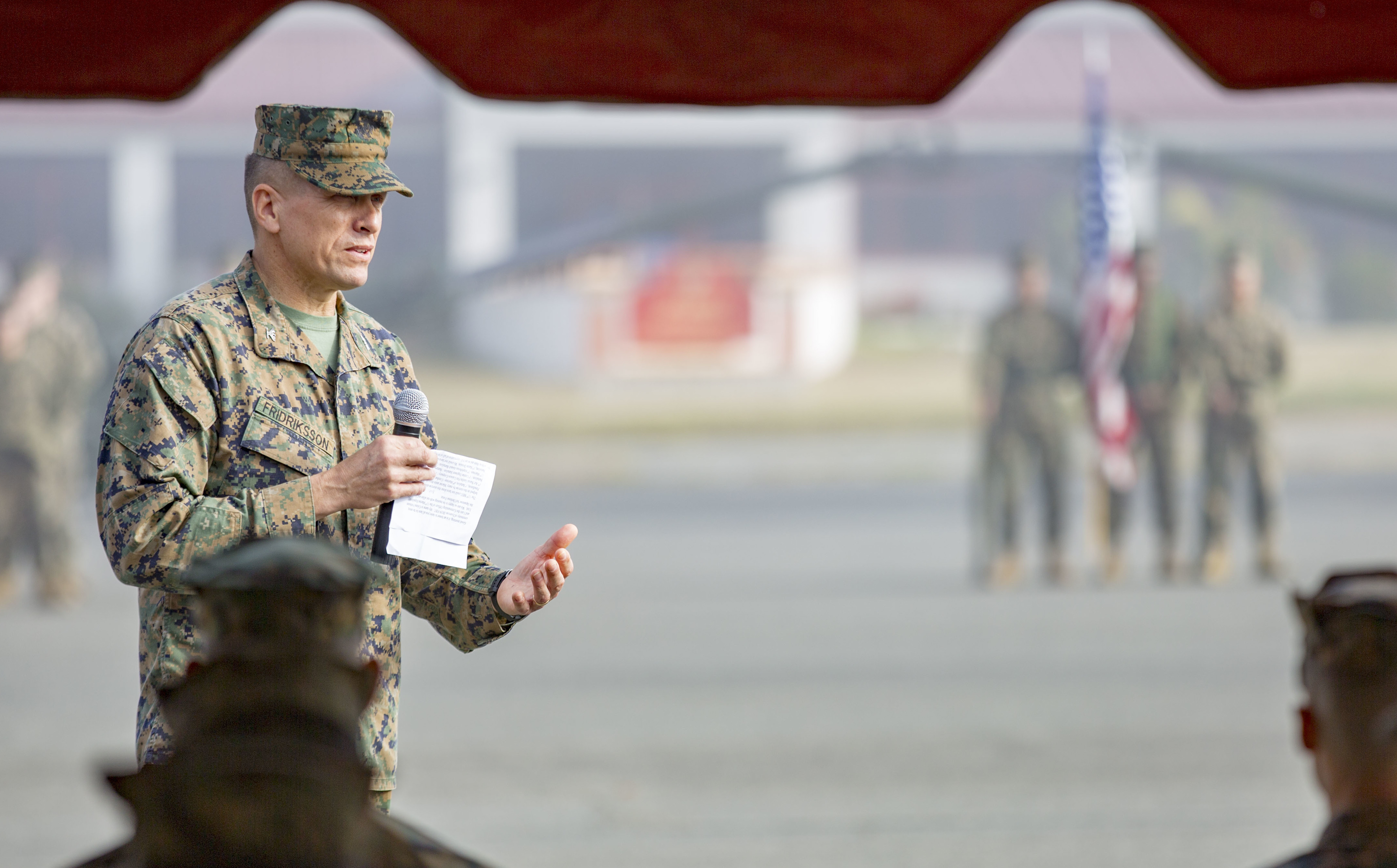 Japan is a “vital ally,” Fridriksson said, noting that long-running, bilateral exercises “will ensure that if danger comes to one of our countries, we will fight together and defeat this threat.”

Japan has been working in recent years to build a “joint dynamic defense force,” with the ARDB is a key part of that. It has partnered with the Marine Corps and the Navy, leaning on their long expertise in amphibious, blue-green missions and joint operations at sea to develop comparable tactics, techniques and procedures for the new brigade force.

Since the first iteration in 2006, Iron Fist training in recent years has shifted from a larger focus on disaster relief and humanitarian operations to include island defense, or what’s described as “recapturing invaded islands,” according to the key JGSDF missions and ARDB roles, according to its Ministry of Defense website.

Col. Ryuji Toyota, who commands the Western Army Infantry Regiment based on the island of Kyushu, spoke just briefly during the ceremony, noting such exercises enable the “step by step” development of the unit’s amphibious capabilities.

Toyota, assisted by a translator, read a message from Maj. Gen. Shinichi Aoki, the Western Army deputy chief of staff, who said Iron Fist provides a “precious opportunity to train” the forces and help in organizing the ARDB. Aoki, in his message, noted reforms including the brigade’s development the Ministry of Defense is doing to strengthen the U.S.-Japan alliance, but he also noted threats from “various challenges and unstable partners, such as further development of nuclear weapons and ballistic missiles.” 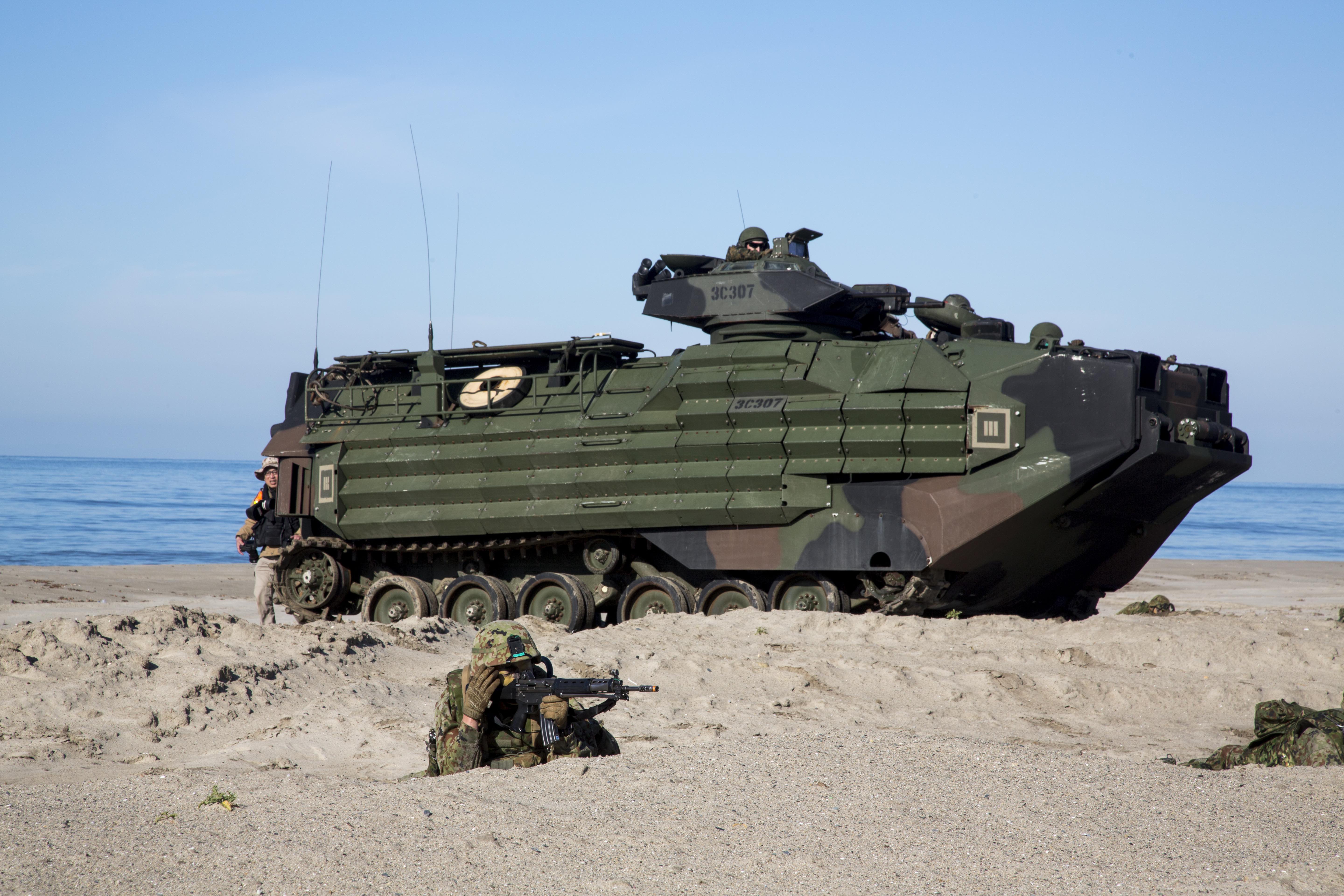 Exercise scenarios, as developed by planners to support the force’s training objectives, include taking back a contested island and reinforcing it with additional forces, officials said. “It is designed very similar to the stuff we normally do,” Fridriksson told reporters after the ceremony. “We are just trying to improve the Japanese amphibious capabilities… Island defense can be one of them.”

Whether future training scenarios would incorporate a nuclear threat isn’t clear, but Toyota’s comment acknowledges an obvious, underlying unease around the Pacific Rim. “I know we are taking steps on many many levels to help out and work with the Japanese on this,” Fridriksson said in response to a question about Toyota’s nuclear concerns. “ Myself, I have very, very good friends that live on the mainland of Japan, and they are concerned about it. So I can see why he is as well.”

During this year’s Iron Fist, the JGSDF soldiers will conduct training at Camp Pendleton and in the desert at the Marine Corps Air-Ground Combat Center at Twentynine Palms, Calif., as well as on the Navy’s offshore San Clemente Island and aboard USS Rushmore (LSD-47), officials said.

“Japan is investing a lot of time and a lot of money and, incredibly, soldiers to this exercise. This is really, really exciting for us,” he added.

The vast live-fire and maneuver ranges and assault beaches are highly sought-out by the JGSDF as soldiers are limited in the ranges available to them at home in Japan. Some of the soldiers have trained at the California bases in previous exercises, although more than half are participating in Iron Fist for the first time, according to a Marine liaison to the force told USNI News. 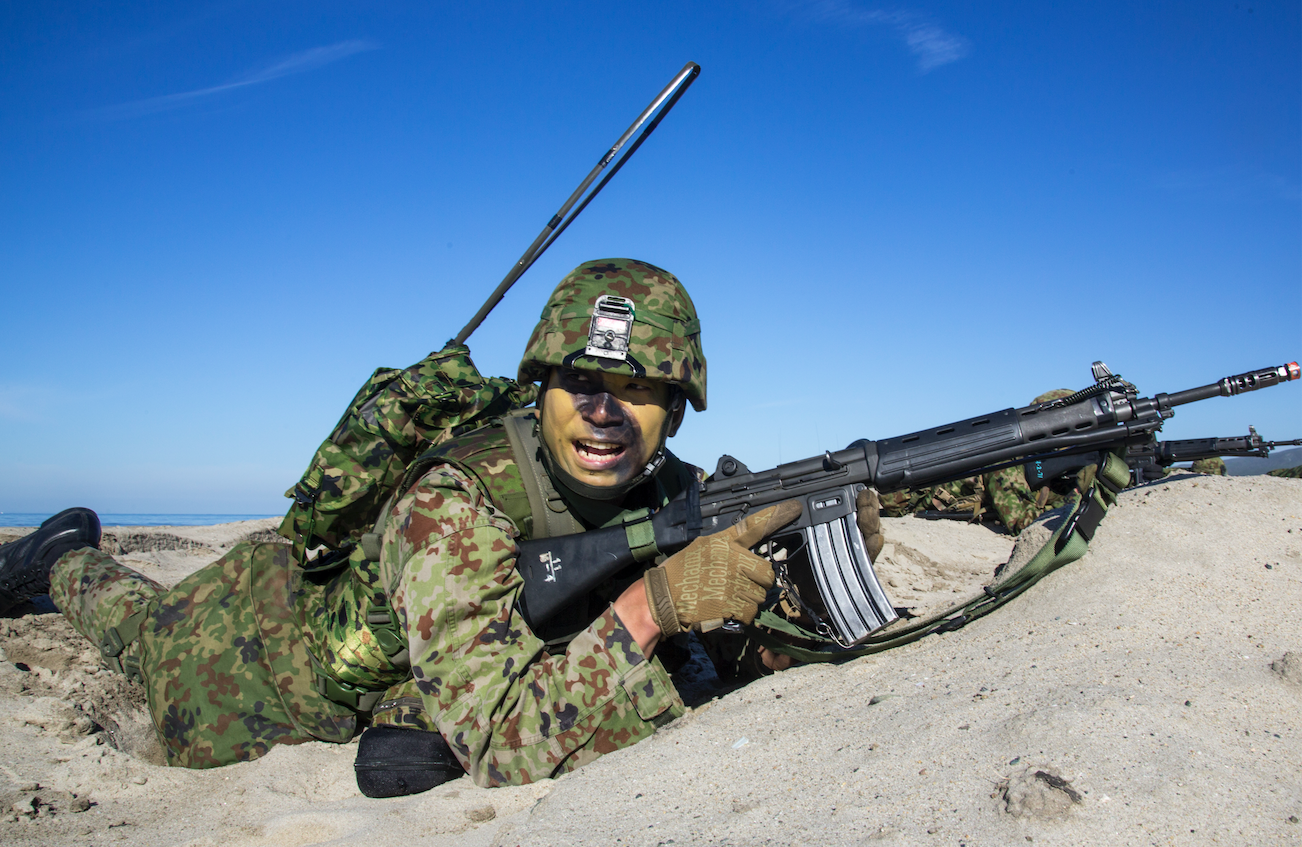 “This is the big milestone,” said Maj. Paul S. Smith, a communications officer by training who recently started his assignment as a Marine liaison officer with the Western Army Infantry Regiment.

“We want to build up, hopefully, their expertise and capabilities that they have so far,” said Smith, one of three liaisons currently assigned as work with the JGSDF.

“A big part is working with the (Japan) Maritime Self Defense Force. There’s a lot of exchanges going on,” he said, adding that “it’s progressing. There’s still a lot of work to be done.”

A few JMSDF officers attended the opening ceremony, but Japan has no ship participating in the exercise.

“The GSDF is trying its best to get the ARDB up and running – and is making good progress,” retired Marine Lt. Col. Grant Newsham, a former liaison officer in Japan, told USNI News. “It’s worth noting that as late as 2012, the idea of an ARDB was unthinkable. Even the idea of a real amphibious capability was taboo in the Japanese political world, and even inside the JSDF. There were ‘reformers’ however who knew what needed to be done – and Iron Fist sort of kept the flame alive.” 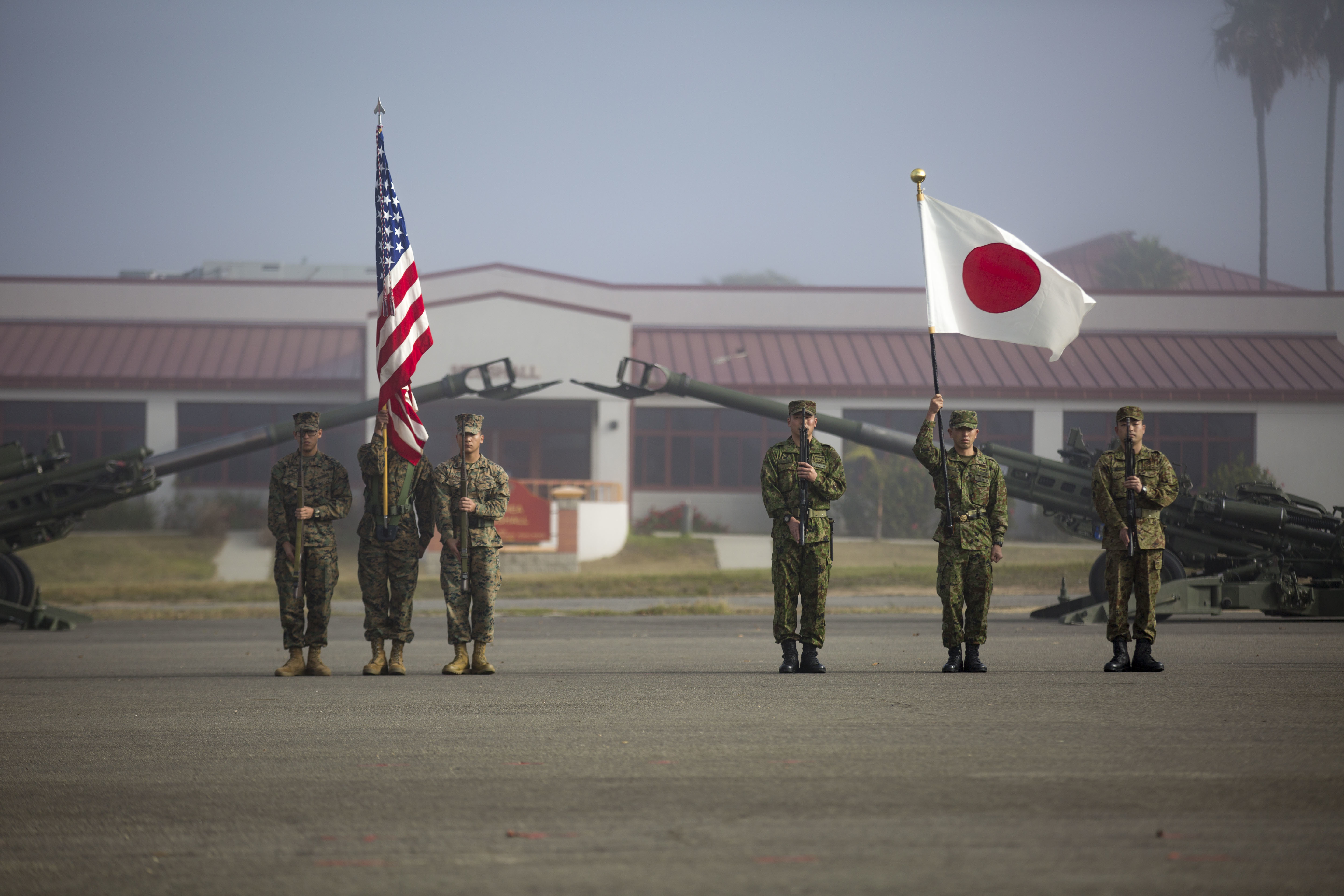 Still, Newsham said, there are challenges particularly in building that joint capability. “One of the shortcomings is that GSDF and MSDF are not coordinating their efforts the way they should,” he said. “It’s kind of done in parallel, and that’s the wrong way to do things. Look around at Iron Fist and ask where the MSDF is.”

Having additional maritime officers “plugged in” with the ground forces as well as with the Marine Corps and Navy, he said, are needed for them to build a credible joint amphibious capability.

With its April 1 target ahead, the ARDB won’t be near brigade size, in personnel and in equipment.

Key to the brigade’s ability to rapidly deploy with amphibious capabilities are the MV-22B Osprey tiltrotor aircraft and the AAV-7, the amphibious assault vehicle used by Marines, both of which Japan is purchasing for the new force.

The ARDB currently has four amtracs in hand, Smith told USNI News on Friday. As many as 30 vehicles were planned to be available by the time the first ARDB unit is stood up by April 1. But last month, news agencies in Japan reported that “production delays” in amtracs or parts will delay the fielding of the vehicles by at least several months.