The Arleigh Burke-class guided-missile destroyers USS Mustin (DDG 89), USS McCampbell (DDG 85), and USS Barry (DDG 52) maneuver near the USS Stethem (DDG 63) during a surface exercise in waters south of Japan on Feb. 27, 2017. The destroyers eventually sailed to Guam to participate in the Multisail 2017 exercise with Japanese forces. US Navy Photo

WASHINGTON NAVY YARD – The upcoming Fiscal Year 2019 budget request will begin to reveal the Navy’s plans for building up the fleet – both through new shipbuilding investments and through a plan to keep current surface ships in service longer, the head of Naval Sea Systems Command told USNI News in an interview.

Reaching 355 ships, the requirement laid out by the Navy in December 2016, “is a primary focus of the Navy,” NAVSEA Commander Vice Adm. Tom Moore told USNI News.

“We’re having ongoing discussions about how we’re going to do this. I think you’ll see the budget that comes out for ‘19 is going to significantly add to shipbuilding, and you’ll see that we’re leaning forward on the looking at what we can do to SLEP (service life extension program) some ships and also make the necessary investments in the shipyards. It’s really an integrated plan,” Moore said in a Dec. 18 interview at Washington Navy Yard.

Moore said the Navy began studying what it would take to build to 355 ships when President Donald Trump was elected and expressed early support for that larger fleet. New construction alone would take into the 2040s, Moore said, which doesn’t help the Navy address urgent needs around the globe today. He said the service has spent the last six months studying SLEPs for current surface ships, as well as other options, and said a SLEP for some destroyers and amphibious ships is “technically feasible.”

“Both the secretary of the Navy and the [chief of naval operations] are very interested in a program that would extend the service life of the DDGs in particular. It has great interest from the Hill as well. I think we’ve come through the technical hurdles and it’s just at this point, like everything else, it’s balancing everything else we want to get done in the budget. But I think, like I said, when the ‘19 budget comes out I think you’ll see some things that will tell you we’re ready to make an initial investment in some of these ships to keep them around a little bit longer,” Moore said.
“Without getting way too far in front of Navy leadership here, it’s got to be part of our overall strategy to get to 355. It’s the only way you can get there – instead of getting there in 30 years, it’s the only way you can get there in say maybe 10 to 15 years. So I think that’s something we really want to go look at.” 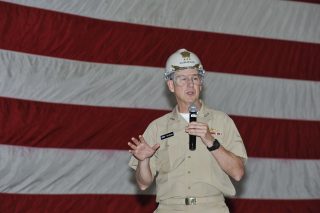 He said the 2016 force structure assessment laid out not just the 355-ship figure but also a breakdown of how many of each type of ship the Navy will need going forward, so the SLEP needs to keep the right ships around. Moore said destroyers and attack submarines are two key parts of the fleet the Navy needs to grow – with DDGs being a good candidate for the SLEP but SSNs relying on new construction to increase their numbers.

As for the specifics of which hulls would be kept in the fleet for how many years beyond their planned decommissioning date, Moore said it would largely depend on their major docking availability schedule.

“If the funds were available, what we’d like to do is, how long we keep the ship would be dependent on when their next major docking availability is. We know once you put it in a major docking availability you can pretty much keep them for eight to 12 more years,” the vice admiral said.
“If the next major docking availability is five years in the past, then maybe we don’t keep them quite as long. I think we’ll use the docking, when they dock next and when we want to make that investment, as kind of the snap of the chalk line as to how far we would keep the platforms. We’ve walked through that, hull by hull, for all the DDGS and all the amphibious ships, so we know pretty well on a hull-by-hull basis how long we could keep each of the ships. You could always keep them longer, but you’re balancing how long do you want to keep them versus how much it’s going to cost. So if you’re willing to make the investment of the docking availability, the cost over the next eight to 10 years is relatively inexpensive compared to buying a new one.” 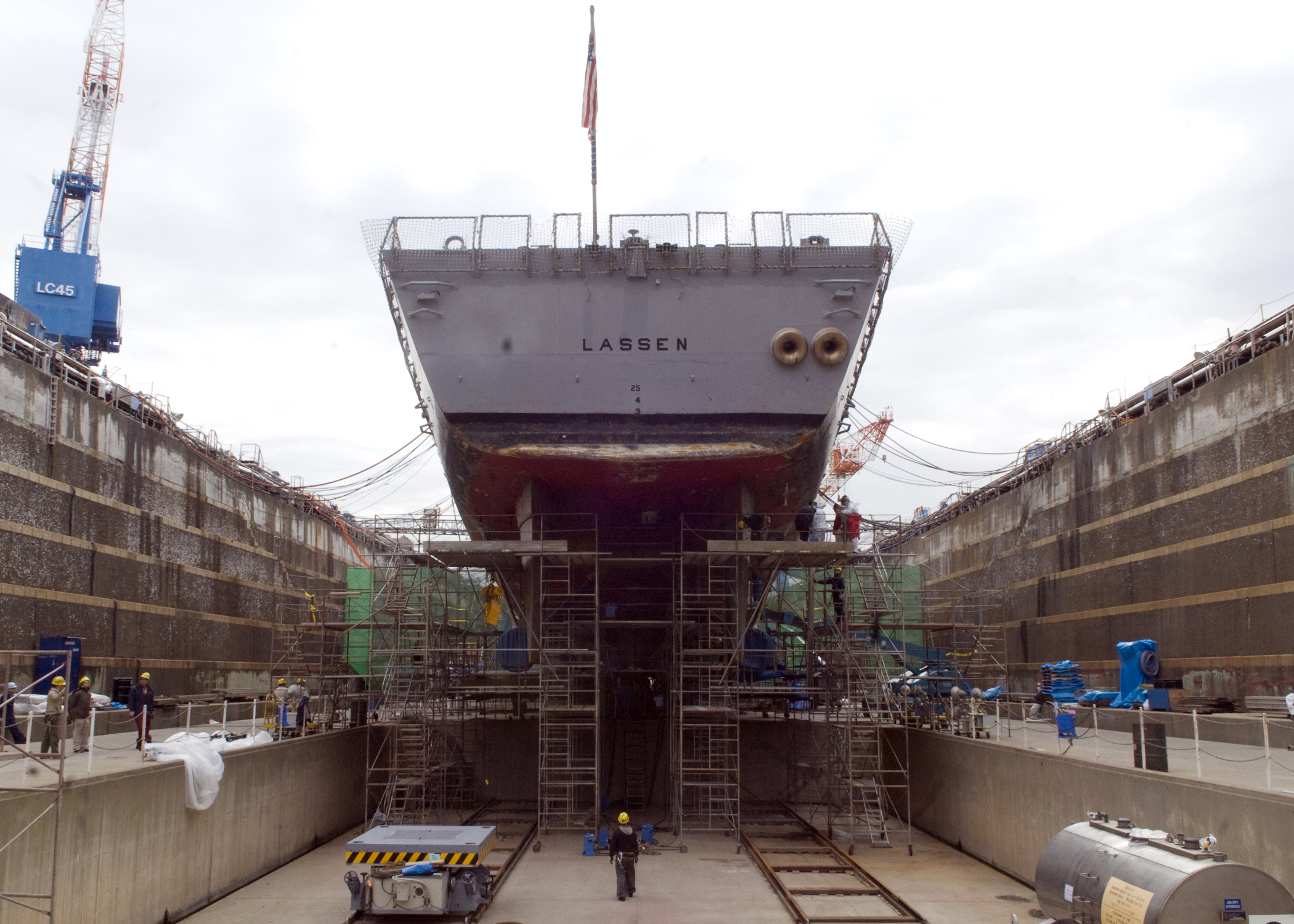 Contractors from the Fleet Activities Yokosuka Ship Repair Facility perform maintenance on the guided-missile destroyer USS Lassen (DDG 82) as it rests in dry dock on March 23, 2009. US Navy photo.

In terms of the capability those DDGs would bring to the fleet, “as long as the combat system can be relevant, there’s no technical reason not to keep them around. And we know today the DDGs, the combat system comes with Baseline 9 and vertical launch and open architecture, they’re out there doing amazing missions today,” Moore said.

Moore said in the interview that the FY 2019 budget would support this SLEP effort as well as new construction, noting that “without getting too much out in front, from what I’ve seen there’s a strong emphasis on shipbuilding and it’s clear where the administration is, it’s clear where the secretary of the Navy is. I think you’ll see we’re progressing down the path we’d like to get on. It’s always a challenge with competing demands on the budget, and the competing demands in this town, all the other things we’d like to get done. I think the Navy continues to make a compelling case why we need more ships. … I think you’ll see ‘19 will be better in terms of the number of ships we’re building.”

Lastly, Moore said that if the Navy takes steps to increase the size of the fleet, it will become even more important to recapitalize the public naval shipyards to support a great demand for ship repair and maintenance.

The Navy will submit to Congress in February a plan to overhaul the four public yards. Moore said the plan looks at spending about $10 billion over 20 years to optimize the layout of the yards for modern ships, upgrade equipment, replace aging drydocks and in some cases build new and larger drydocks for ships such as the Virginia-class submarine with the Virginia Payload Module addition that would not fit in existing drydocks.