WASHINGTON, D.C. — Taking out incoming missiles during the boost phase – the period just after launch – is something the military’s missile defense leadership is confident will occur in the not too distant future.

Speaking Wednesday at the Center for Strategic and International Studies, Rear Adm. Jon Hill, deputy director of the Missile Defense Agency, said the continental U.S. is safe for the moment, but his team is focusing on how to defend against an ever-evolving threat. Hill’s talk, part of the Maritime Security Dialogue series, was co-hosted by CSIS and the U.S. Naval Institute.

“The defense system we have in place today will defend against the threat as we understand it today,” Hill said. “What we’re concerned about is tomorrow’s threat as it continues to increase.”

With countries such as North Korea and Iran continuing to enhance their missile technology, Hill said the Missile Defense Agency’s goal is building and maintaining a robust layered defense system as ship-based and land-based radar and interceptors coordinate with satellites. Hill said gathering enemy missile launch data early is vital for the defense system to be effective. With the Aegis radar system aboard guided missile destroyers, Hill said his agency has the ability to receive very early looks at when an enemy launch is occurring. 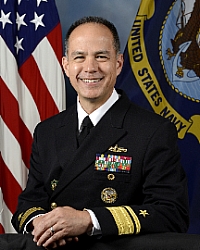 “If that ship is based is properly placed up forward, it gets an early detection, and can cue the ground-based missile defense,” Hill said.
“It allows them to detect a lot earlier and shoot a lot earlier.”

While parking ships off the coast of threatening nations provides missile defense operators a decisive advantage in calculating a missile’s track, Hill conceded doing so comes with a cost to the fleet’s operational tempo.

Following a year when two deadly collisions between guided-missile destroyers and merchant ships, the Navy is currently reassessing how its ships are deployed. Putting the Aegis system on shore, Hill said, offers a partial solution.

While ships can go where we need them to go and bring a variety of weapons, Hill said it might make sense to put Aegis on land in a region where the threat is static and near a friendly chain of islands.

News reports have stated Japan is considering asking for Aegis Ashore systems, similar to what’s been deployed to Romania and being brought to Poland, but Hill said a decision has not been finalized. Other nations have also inquired about Aegis Ashore.

The remarkable thing about Aegis, Hill said, is the system was developed four decades ago, primarily as an air defense system. But the system proved to be very adaptable, which is why it’s still used today, and why friends and allies are interested in being a part of the missile defense system.