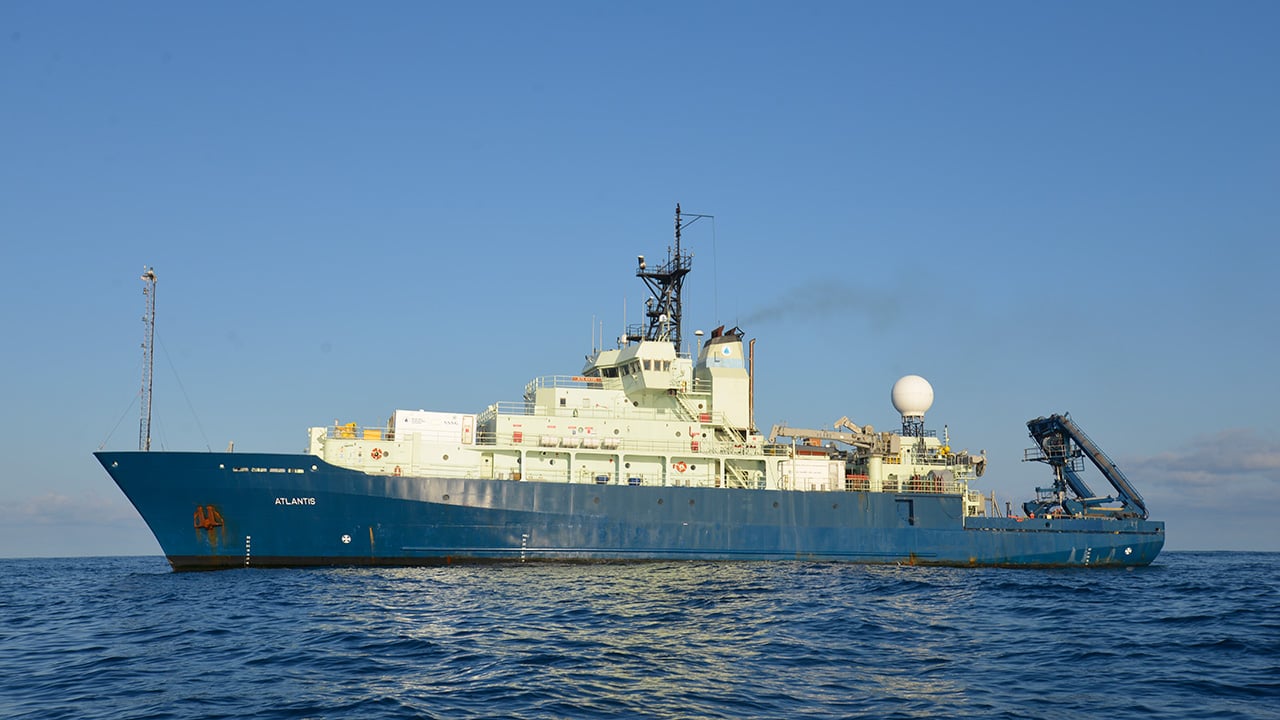 R/V Atlantis operated by the Woods Hole Oceanographic Institution, and owned by the U.S. Navy.

The international effort searching for ARA San Juan – the Argentine submarine missing for more than three weeks – is focused on a region where the continental shelf below the sea surface rapidly slopes down to the deep South Atlantic.

A trio of internationally-run remotely operated undersea vehicles – including one from the United States – are regularly being sent to the sea floor to investigate possible final resting locations of the submarine, according to a statement released by the Argentine Navy.

Along with teams from the U.S., the United Kingdom, Russia, and Chile are continuing to assist the Argentine Armada in the search for San Juan.

The Woods Hole-operated research vessel Atlantis, which is owned by the U.S. Navy, was diverted from a previously scheduled research mission off the coast of Uruguay to assist with the San Juan search, Munior said.

What makes Atlantis so integral to an undersea search such as this is both its ability to be used as a platform for remotely operated undersea vehicles and its onboard multi-beam sonar. Munior explained the multi-beam sonar is a system used to sweep the sea floor to create very detailed maps.

“We can detect things that are either the right size or are man-made,” Munior said, of what the search team is looking for in the data collected.

Once an anomaly is detected, the remotely operated vehicles can be sent down to get a better look. For example, earlier this week, Atlantis detected something on the sea floor about the right size as San Juan.

This information was analyzed and shared with Russian search team, which sent their remotely operated vehicle down to get a better look, according to a statement released by the Argentine Navy. The object turned out to be a large boulder.

At the time, Atlantis was headed back to port to pick up the U.S. Navy’s CURV remotely operated vehicle. Buy Friday, Atlantis was in position where crew members could send CURV down to investigate sonar hits, according to a statement released by the Argentine Navy.

CURV can dive to nearly 20,000 feet, which Munior said was more than what’s required in the search area. If the weather conditions hold up, Munior said there’s a good chance search teams will find San Juan soon.

The search area is fairly narrow, Munior said, because an explosion detected shortly after the sub’s last communication. An array of hydrophones used to detect underwater nuclear testing by anti-proliferation agencies recorded a blast, which Munior said was used by search teams were to triangulate a search area.

Rough seas can complicate the search, Munior said, because the sonar data can end up being less precise. But the likely location, on the sloping shelf, will help search teams. Munior said there doesn’t appear to be many deep trenches are large outcroppings which make it more difficult for remotely operated vehicles to navigate.

If the submarine is located, searchers will likely only find more questions than answers. Chief among the question is why San Juan didn’t surface.

“Why they didn’t go up is anybody’s guess,” said Dan Martini, a retired Master Chief Electrician, who spent most of his U.S. Navy career aboard diesel-electric submarines.

Martini is following news of the San Juan search from his home in Kennewick, Wash., is says the batteries and the snorkel are important clues to what happened to San Juan. Perhaps a critical clue, Martini said, is what appears to be San Juan’s snorkel location – directly above battery three.

Two of San Juan’s four batteries were already having trouble, or not working, when the sub decided to head back to port. Among the last communications from the sub, San Juan’s commander reported salt water entered the sub through its snorkel, and shorting out battery three, sending smoke into the sub and possibly starting a fire, according to a statement released by the Argentine Navy.

At 7:19 a.m. on November 15, San Juan’s captain called his commanders saying the boat was “in Periscope Plane (18 meters) with course 015 degrees at a speed of 5 knots with controlled failure,” according to a record of communications released by the Argentine Navy. The captain added he intended to “go to the security level (40 meters) to enter the battery tank in order to assess the damage.”

“You can isolate the battery but that doesn’t get rid of the problem,” Martini said.

With saltwater sloshing around the battery compartments, Martini said, a chemical reaction could have released chlorine and hydrogen gases. Any spark, such as one caused by work bridging cells in the sub’s battery, could have caused an explosion.

If this is what happened, Martini said the explosion “Probably would have killed everyone inside.”

If saltwater on the sub’s batteries did cause a gas release, Martini said the crew probably had about an hour or so worth of oxygen using emergency breathing devices, commonly issued on submarines.

At about 10:50 a.m. an explosion was detected by anti-nuclear proliferation agencies near the last known location of San Juan, according to a statement released by the Argentine Navy.

The explosion is now considered a central clue to finding the submarine. But was sound detected an explosion caused by the batteries, or as some searchers suspect, an implosion of San Juan’s hull being crushed by the immense water pressure? Martini says we may never know.