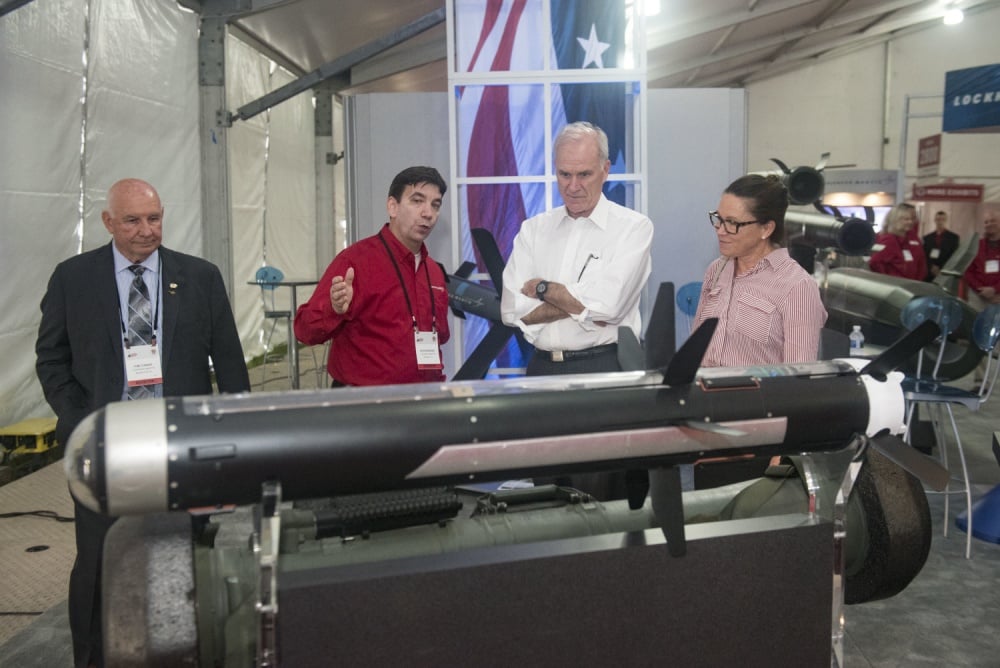 Secretary of the Navy Richard V. Spencer, standing second from right, views a static display at a technology exposition during the 2017 Marine Corps General Officer Symposium. (Photo by U.S. Navy)

WASHINGTON, D.C. — “Fast and frugal,” is how Secretary of the Navy Richard V. Spencer described the way he envisions establishing a long-term spending process to acquire new technologies and expand the fleet size.

Speaking Monday at Defense Forum Washington 2017, sponsored by the U.S. Naval Institute, Spencer described what he hopes becomes a partnership with the defense industrial base sharing risks and rewards.

The way the Navy and the Pentagon acquire new technologies, weapons and systems places much of the risk on taxpayers providing the funding for research and development, while the industrial base is rewarded with contracts, he said.

Spencer wants to create a partnership where the Navy provides industry with what he called, “a clear line of sight to our needs and resources so they can invest in the necessary research and development to provide us solutions to our challenges.”

For Spencer, who comes to the Pentagon from the private sector, creating better value for the people funding his operations has been a hallmark of his career. While chief financial officer with Intercontinental Exchange, Spencer embraced technology such as online commodities trading, to provide investors with a better return.

On Monday, Spencer described a similar goal, only now his investors are the American taxpayers. Sharing the risk of developing new systems with industry will help lower costs and hopefully speed up the acquisition process, ultimately providing taxpayers with a better value, he said.

“I’ve learned from the world of business that when you’re facing competition, you need to have the resources and processes in place to innovate, compete and win – and to stay ahead of the competition at all times,” Spencer said.
“It’s when you take your hand off the throttle that the competition starts to close.”

In the business world, not attaining goals and allowing near-peers to catch up is bad for the bottom line and investor confidence. When talking about national security, though, Spencer said the stakes are much higher.

“I can assure you that near-peer potential adversaries aren’t just treading water – they are full throttle and catching up quickly,” Spencer said. “Spending the money needed to develop the lethal capabilities that will challenge ours.”

With congressional support authorizing block and multi-year buys, Spencer said the Navy is sending the message to industry now is the time to invest in the future.

“Tools like these help us balance the economies of scale while ensuring the health of the defense industrial base, a base that at the end of the day provides us our capabilities,” Spencer said.

But Congress is also complicating Spencer’s job approaching industry. The current budget environment, where Congress continues operating under continuing resolutions instead of approving new spending on an annual and somewhat predictable basis, doesn’t instill the confidence needed by the industrial base to ramp up their production and research capabilities.

The partnership Spencer spoke of, he explained, involves him showing the defense industry there’s both the money from Congress to pay for new programs, including expanding the fleet size, but also that the Navy has a clear strategy for what is needed not just now but for the next couple of decades.

Because of the Budget Control Act of 2011 and the series of continuing resolutions – which limit spending, Spencer said the Navy alone has lost about $4 billion due to inefficiencies in its ability sign contracts.

Spencer said he is confident in the defense industry’s ability to match the Navy’s demand for new technologies and equipment. The industry just needs a clear signal the Navy and the Department of Defense is ready to pay for investments in expanding production and research.

“We have to lay the foundation for that growth,” Spencer said “We must ensure the health of the defense industry and workforce are in place. Large capital investments need to be made today to build the fleet of tomorrow and to maintain that fleet.”