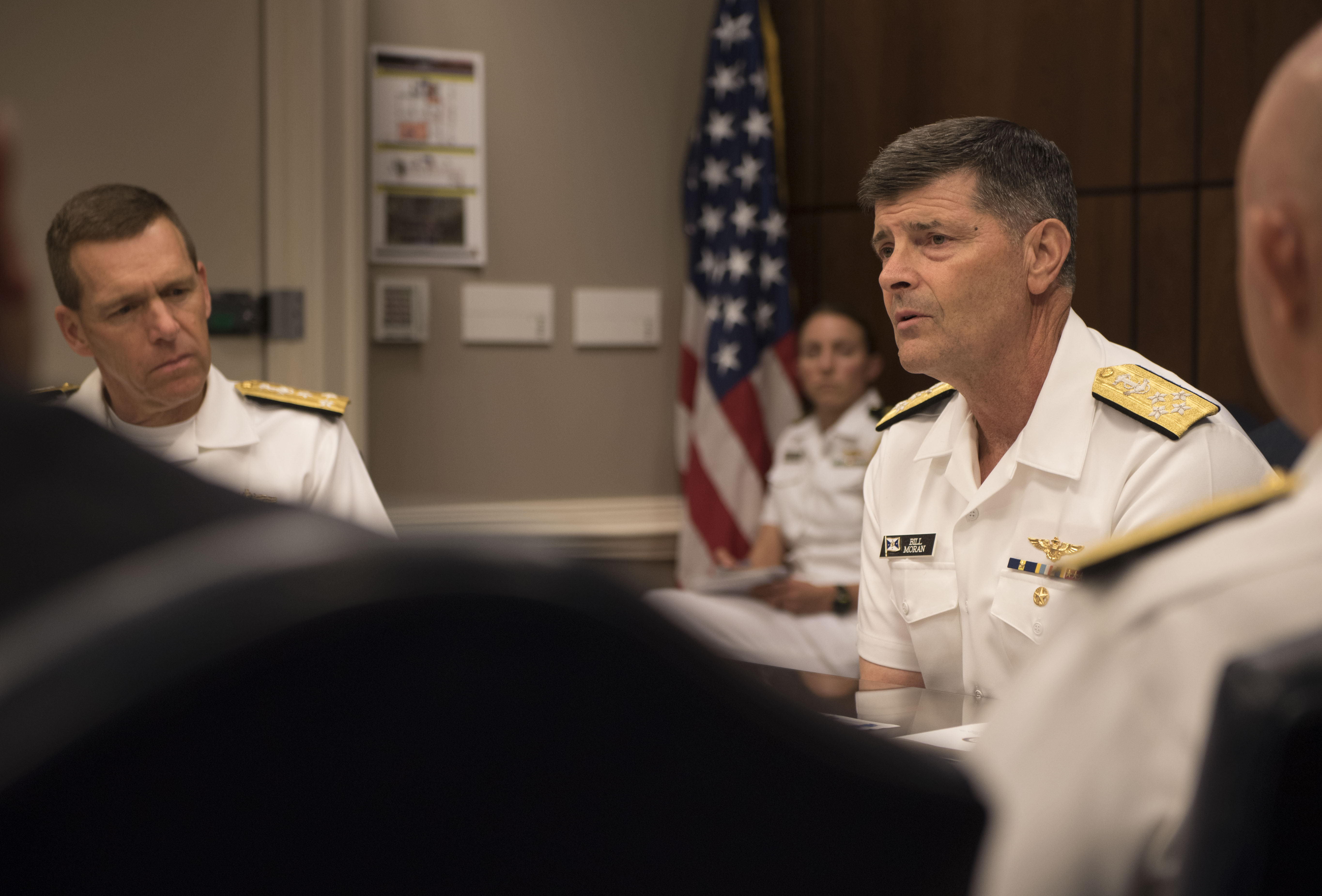 The Navy’s second-highest ranking officer is heading a new group that will implement recommendations to make the surface force safer following two fatal collisions of U.S. warships in the Pacific that killed 17 sailors.

On Tuesday Vice Chief of Naval Operations Adm. Bill Moran will meet with a newly formed oversight committee that will take the recommendations from a comprehensive review in to the failings of the surface force that led to the collisions of USS Fitzgerald (DDG-62) and USS John S. McCain (DDG-56), he told USNI News on Friday.

“The oversight board is going to make sure that we properly prioritize them in a framework that gets after the greatest needs of the fleet … looking at it from a commanding officer’s [perspective],” Moran said.
“The center of the universe in this effort is the commanding officer, and we need to provide him or her the level of support they need to be effective.”

Moran will evaluate not only the recommendations of the U.S. Fleet Forces Command commander Adm. Phil Davidson-led review but also those from previous Government Accountability Office and Inspector General reports and from the upcoming strategic review of the surface force initiated by Secretary of the Navy Richard V. Spencer.

“There’s a lot of concern of where do we go next with this comprehensive review,” Moran said.
“There’s a lot of activity going on, but it needs to be put in a framework and a structure that allows [us to understand] and measure how well we’re doing.”

The wide-ranging panel will include the commanders of U.S. Pacific Fleet. Scott Swift, Fleet Force’s, the commander of U.S. Surface Forces as well as the director of surface warfare, the Navy Inspector General and the Chief of Naval Personnel.

The panel is set to meet monthly to evaluate the progress in evaluating and implementing the recommendations.

“Some of them are longer term. Some of them need to be studied, as was pointed out in the comprehensive review. I will keep my foot on the accelerator to ensure that we get after each one of these,” Moran said.
“We have to prove that we can do this.”

For example, the Navy is operating its ships in busy waterways with commercial identification systems that allow them to be more visible to other ships. The surface fleet is also pushing for crews to get adequate amounts of sleep to fight fatigue.

While some short-term solutions are in place, a major challenge for Moran’s board is to give surface commanders tools to make sure their crews are ready and their ships are maintained enough to be effective. Surface units don’t have the same set of institutional minimum standards that prevent untrained or poorly equipped or maintained ships from getting underway as compared to the submarine and aviation communities.

Moran, a naval aviator, said when he entered the service U.S. naval air forces were just beginning to institute sleep, maintenance and training minimums that ultimately lowered the mishap rate for U.S. Navy aircraft and crews. A decade ago the submarine community suffered several incidents and took a new look at their standard operating procedures.

“We’re not seeing the same commitment to those standard operating procedures in the surface force, and this was an important finding,” Moran said.

Part of the effort, once the standards and procedures are in place, will be to establish consistent training to ensure sailors get adequate practice. Part of the cause of the McCain collision was confusion on how the helm controls worked by an inexperienced operator.

“I don’t think we have adequate capacity to do that like we ought to across the fleet and certainly have the capacity at the waterfront or even on the ship that we should have,” Moran said.

Moran, who served as the Chief of Naval Personnel before becoming VCNO, is set to travel to Florida for the Interservice/ Industry Training, Simulation and Education Conference to ask industry how to maximize returns from training surface sailors.

“How does industry help us be more mobile in the application of that training?” said Moran.

But the fixes aren’t just training. Moran will oversee a sprawling set of changes that will cut across every part of the surface navy.

“The fleet and the media and Congress ought to be skeptical until we can show that we’re making progress and hold us accountable,” he said.
“The only way you can hold us accountable is by us issuing a report that answers with some factual metrics on how we’ve gone after each and every one of these things over time.”