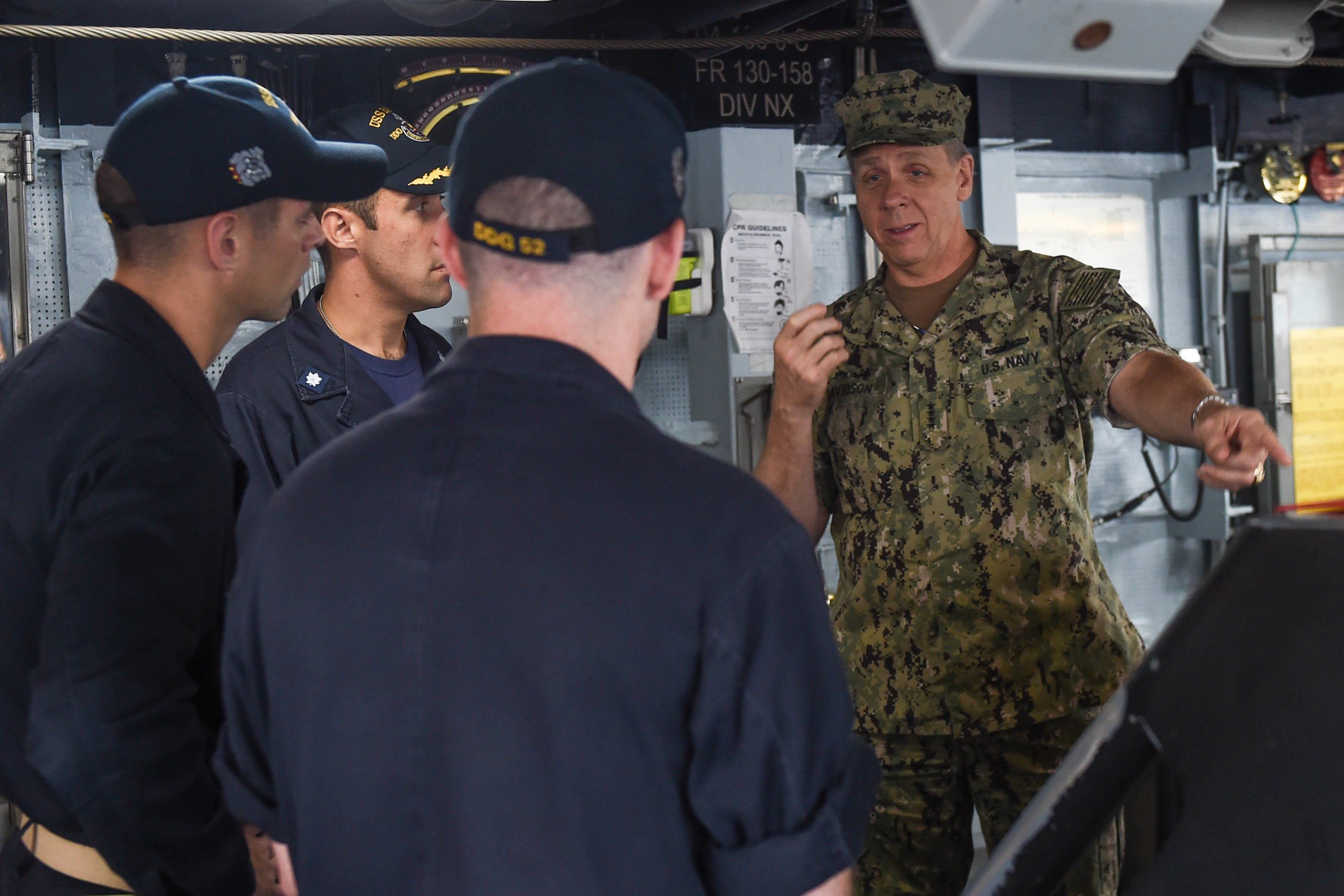 NAVAL STATION NORFOLK, VA – While the Navy will spend months and years dealing with the aftermath of two fatal surface ship collisions this year and the subsequent Comprehensive Review of Recent Surface Force Incidents, U.S. Fleet Forces Command is beginning to implement some changes that will affect individual sailors and units in the near-term.

Two key realizations for Davidson, who led the 60-day comprehensive review, and his 34-man team were that sailors were deficient in the fundamentals – “the actual application of the rules of the road, COLREGS, what to do, when to do it; both in planning, preparing and executing in the heat of the moment” – and that team cohesion on ships had broken down.

To address those two challenges, several training changes are being made now and in the coming months.

At the Surface Warfare Officer School Division Officer Course (SWOSDOC), several changes are being made that “affect the length of the course and perhaps whether you can do it in two chunks or not. But we want to drive at the rigor in training and assessment – for seamanship and navigation, damage control, basic division officer leadership and management – for our SWO candidates,” Davidson said at the all-hands call on Monday.

“Who’s ever been in command in their life? [hands raise in the audience] Everybody in command always knows you’ve got one ensign on the ship that, when you say, hey, come right, they go left full rudder. Is that fair? [laughter from audience] Or doesn’t really have a sense of relative motion. We’re going to test all that up at SWOSDOC, and if they can’t go right full rudder when you want right and they can’t do relative motion, we’re going to find something else for them to do. We’ll have an assessment right up there for SWO candidates before they get to the fleet.”

Once a candidate is selected to serve as a SWO, Davidson said it was important to give them adequate training to serve in positions like conning officer or junior officer of the deck – and not only prepare them to take that job in name, but give them the skills they would need if a crisis occurred while serving in those positions.

“We’re going to drive in the skills that would allow them to immediately be qualified essentially as a conning officer, or JOD, and have all the skills that’s required to be an officer of the deck,” the Fleet Forces commander said.
“This requires a major investment in simulation up there at Newport (Rhode Island) and down here on the waterfront as well to improve all that, but they’re going to have the skills so that when they step onboard the ship they are a contributing member of the team.”

Davidson added that at every step along the way, formal training and assessments need to better prepare officers for real-world scenarios and ultimately determine if those officers are a good match for the job about to be entrusted to them. The comprehensive review calls for “an objective, standardized assessment program to periodically assess individual seamanship and navigation skills over the course of a Surface Warfare Officer’s career.”

In addition to individuals being trained and assessed to a higher standard, Davidson told the audience that ships’ crews would have to work as a more cohesive team and that at-sea certifications and other events would be modified to assess that teamwork aspect.

“Instead of just testing the bridge, testing the [combat information center], CIC and bridge are going to get tested as a total team,” he said.

The comprehensive review calls for improving shore-based bridge trainers to tie in the CIC simulator to “improve watch team cohesion and performance,” as well as to integrate bridge and CIC evaluations in trainers and at sea.

Davidson told USNI News on Monday, in an interview in his office, that changes to training to support team performance “can happen in a relatively short order” and are among the first changes he intends to make in the aftermath of the comprehensive review.

“The at-sea training, we can get to it immediately. It requires that we change some of our mobility seamanship and mobility navigation exercises; they’re going to have to adjust the metrics .. to make sure we’re measuring those things,” Davidson said.
“But really what I’m driving at is, there’s a lot of little individual watch station assessments, and then it’s kind of, well here’s your total score. What I want is, when we roll up all the individual watch stations, is it a team? And how did that team do? Because if the team is solely dependent on one member, for example, perhaps that’s not really a functioning team, because if that one person is the thing that holds the whole chain together and they have a bad day then you’re in a tough spot.”

Of Davidson’s top three priorities to go after immediately, training accounted for two of the three.

“To me, job one is the individual skills training. So I’d like to get after the SWO candidate training, the division officer training, as kind of step one. There will be some transition there – there’s probably going to be a transition … over the next year too, how do we adapt what we own currently to get more of the training – and I set the priorities of seamanship and navigation, damage control, and division leadership training,” he said.
“So the curriculum adjustments. And then the next set of equipment, and that is [simulators] and the CIC backbone. And (third) would be the commercial radars and the portable pilot units, to get those out on the ship.”

Davidson said at the all-hands call that “in the very near term” the fleet would replace aging military surface radars and portable pilot units, or electronic navigation support systems.

“We’re going to take away a CO’s right to buy his own radar and put it on the ship. There have been some poor decisions made in the past,” he said, and instead a common commercial radar would be fielded, along with a training package and a maintenance package, to boost performance and commonality among surface ships.

“if you walk into Combat in any DDG or cruiser, you see a very well-designed, well-organized, well-configured platform that has a human-machine symbiosis that’s incredibly important to the functioning of that CIC. Nobody controls that on the bridge, and as we’ve adapted, particularly in the old destroyers, to 21st Century technology to do navigation and seamanship, they’ve turned it into a bit of a Frankenstein,” Davidson told the audience.
“So we’re going to get NAVSEA and probably PEO IWS to be the single controller of mods, link it with the CIC and take care of that going forward.”

He said NAVSEA would also begin canceling a crew’s qualifications when they undergo an equipment upgrade and force the crew to re-certify and prove they are proficient with their new gear, much like the submarine community does with its system upgrades.

While some of the equipment configuration management would be a longer-term task, “the portable pilot units I think we can do very very quickly. The commercial radar is going to take a little engineering work to make sure they can find one, or at least a family of commercial radars, that could fit all Navy units, take care of the interference problems and things like that – but I think those are the three biggest investments,” he said of the common communications gear for operational ships, improvements in individual training, and upgrades to team training and associated equipment.

In the longer term, Davidson said there would be changes coming to manning levels on ships. He said during a question and answer session at the all-hands call that the chief of naval personnel was conducting seven DDG manning studies – one for each variant of DDG in the fleet – to determine the most appropriate crew size.

Only one is complete and the other six ongoing, but Davidson predicted “it will result, I think, in a higher number of hands.”

The average workweek for sailors today is 101 hours, largely due to manning cuts in the early 2000s after a push for optimum manning levels, and “101 is clearly too much.” Crew sizes are already up from about six years ago – he said the average DDG has 272 enlisted crew, compared to 240 a few years ago – but so is the amount of work each destroyer is conducting.

“I think we’ll come out of these DDG manning studies … with more people, and we’re going to have to find money for that,” the admiral said, though that funding isn’t likely to show up immediately, as lawmakers have yet to agree on a spending bill for the Navy in the current Fiscal Year 2018. The Navy will make its request for FY 2019 spending in February.

Davidson told USNI News that he wanted to make clear to the surface warfare community that, despite the many upcoming changes in SWO training and assessment, the sailors were doing a good job balancing the great workload being handed to them.

“Most importantly, I want the surface navy to know the nation needs their capability and they are absolutely up to the task. We’ve had many ships over the last 15 (months) perform extraordinarily well in combat: Ross, Porter, Mason, Nitze, San Antonio, Wasp. And the true measure of their performance is that combat performance is really outstanding,” the admiral said.
“So when we talk about making changes, they ought to be viewed in a positive way: that we’re going to retain as much as we can of the can-do culture that has been so important to us in combat for our long history, and try to deliver the skills that are necessary to bring out that can-do culture even more. Don’t misread me, I’m not saying we’re going to respond to every demand, but I want to make sure the surface community understands the nation needs their capability, and I know that they’re up for the task.”