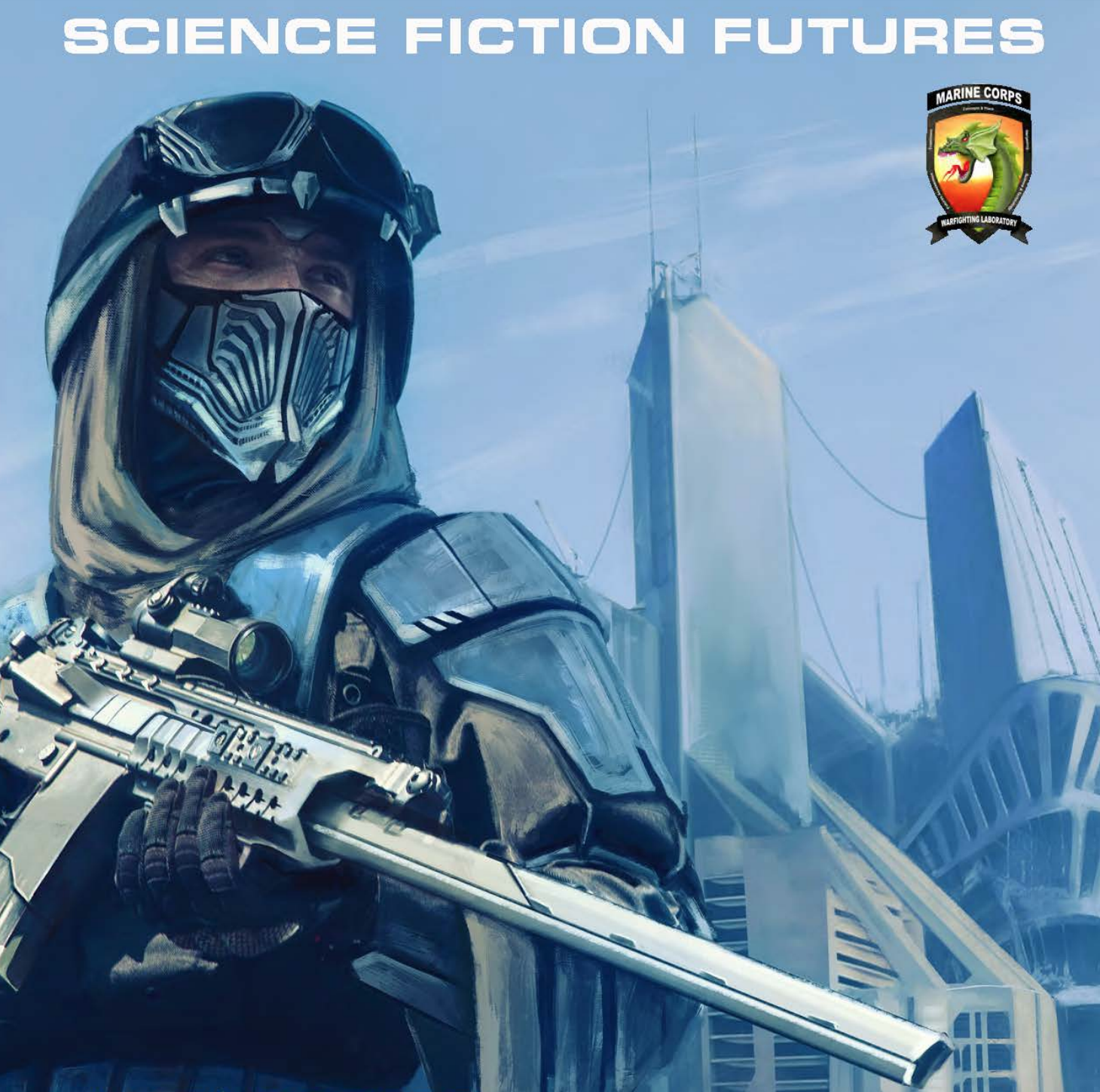 If there’s one constant in planning for future war, it’s that no one expects it to get any easier. To figure out the rough contours of how war gets harder, the Marine Corps Warfighting Laboratory put together uniformed service members with science fiction authors to craft the “Marine Corps Security Environment Forecast: Science Fiction Futures,” a series of short stories approximating calamities the Corps should expect in the future.

In “Water is a Fightin’ Word,” by U.S. Coast Guard Lt. Cmdr. Molly Waters, Marines in exoskeleton suits and robotic teammates conduct a humanitarian relief mission in a world gone dry. In “Double Ten Day,” by Marines Maj. Vic Ruble and Capt. Sara Kirstein, a Marine advise-and-assist mission turns into kinetic urban combat, amidst a post-earthquake Taipei riven by both competing insurgencies and the disaster itself. In “The Montgomery Crisis,” the eight authors detail a bioengineered food shortage that forces a withdrawn United States to cobble together legacy systems and launch an attack for free navigation of the seas against hostile forces in the Mediterranean.

The stories are all grounded in cold, analytical forecasts made by the Marine Corps and influenced by sources as diverse as the United Nations and the writing of Thomas Friedman. It is a useful document, if necessarily a dry one. It’s one thing to say, “it is a world driven by social unrest and marked by instability, complex conflict, food and water shortages, and severe natural disasters.” It is another thing to walk with Marines conducting a raid on a building in Taipei in a world where an earthquake and reactor meltdown turn Taiwan into a collapsed state beset by insurgents. The forecast provides the broader map, but it’s the fiction that shows what inhabiting that world might actually look like.

What’s important about the stories is less the specifics. Speculative fiction is an approximate art, a reckoning of what might be hard in the future, more than an exact roadmap to that future. As such, the forecast deals with modern problems extrapolated outwards. In “The Montgomery Crisis,” display and small arms technology advances, but the U.S. Navy has to make do with then-ancient vessels and planes, like Zumwalt-class destroyers, Ford-class carriers, and F-35B Lighting II Joint Strike Fighters. The military threats are still anti-access, area-denial, powerful ship-killing foreign-designed missiles in the hands of radical religious extremists with near-peer backing. But it’s the impetus behind those attacks, the plague and the grain shortage, that provides the most direct shift: an America made hungry, through careful sabotage at the hands of just a few well-placed malcontents. The story ends with victory, but a temporary one: the plague vector remains, and is beyond the problem-solving abilities of the Marines. Instead, grain shipments and free global trade provide the immediate salvation.

“One of the interesting assumptions across teams was that the Marines are going to be struggling with slightly outdated equipment,” August Cole, co-author of Ghost Fleet: A Novel of the Next World War and director of the Art of Future War project, who advised one of the three groups in the fiction project, told USNI News.
“The writers felt there will always be elements of the kit that are not as modern as someone in the Army.” 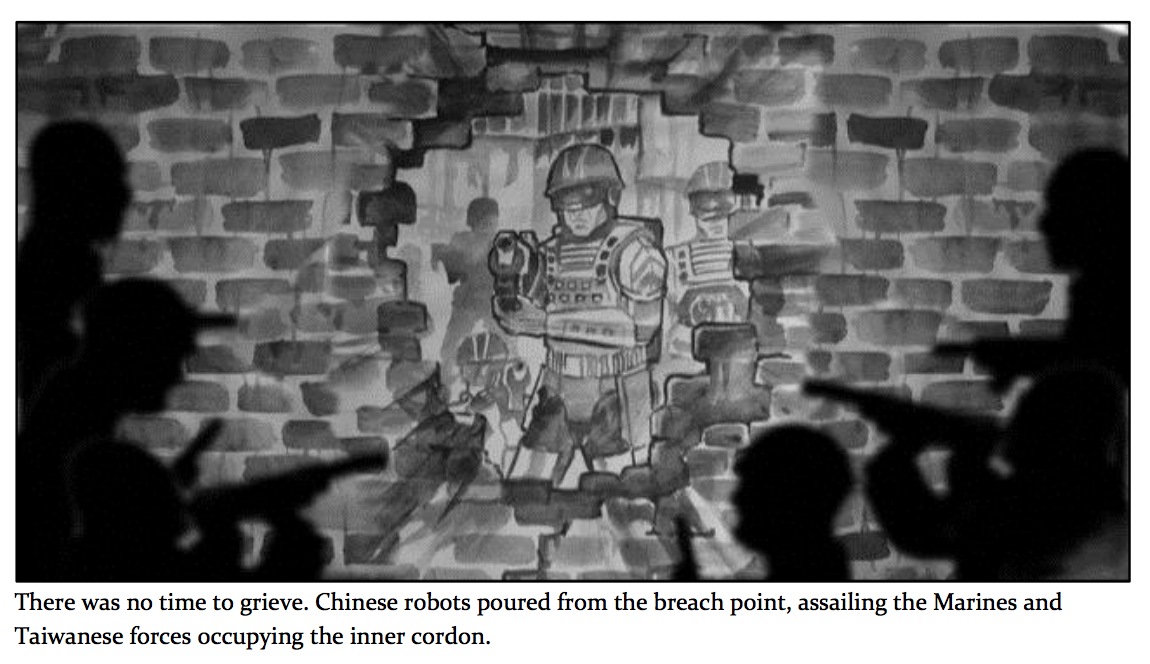 “Double Ten Day” plays out as a nightmarish wargame, with the government of Taiwan too collapsed to provoke a direct state-on-state conflict, but factions within the island turning it into a hell of competing fiefdoms. Here the author envisions Marines on an advise-and-assist, but without much room to keep things from going deadly. Yet it’s the nature of the opponents that are most striking: autonomous robots overloaded by too much visual information, gene-edited special forces stunted at prepubescent heights, ever-present drone sentries and the unavoidable reality of civilians caught in battlefields.

Scarcity animates all three stories, but it has center stage in “Water is a Fightin’ Word.” Water scarcities lead to a heart-wrencher of an opening: a child describing her parents’ decision to no longer use some of the water ration for a family dog. The conflict sends Marines in old-model exoskeleton suits to Lagos, and faces them against local gangs and child-soldiers, in search of stolen medical equipment. Yet it’s the background details that drive home the future: 11-year-olds wielding wooden-stock Russian EMP rifles or less-lethal millimeter-wave weapons. The combined effect is a gritty, worn-in future, the kind of feeling one gets from Star Wars’ Mos Eisley cantina.

“If machine sees X, and is tasked with saying ‘therefore that probably means Y,’ the human recipient of the data is not only getting raw data, they are getting projections on what it is likely to mean, and that is only going to be as good and as accurate as whoever programmed that,” Charles Gannon, science fiction author and one of the co-leads on the fiction workshop, told USNI News.
“One of the things the writers were saying is, ‘if you do take us out of the loop, you better damn well let us know you’re taking us out of the loop.” 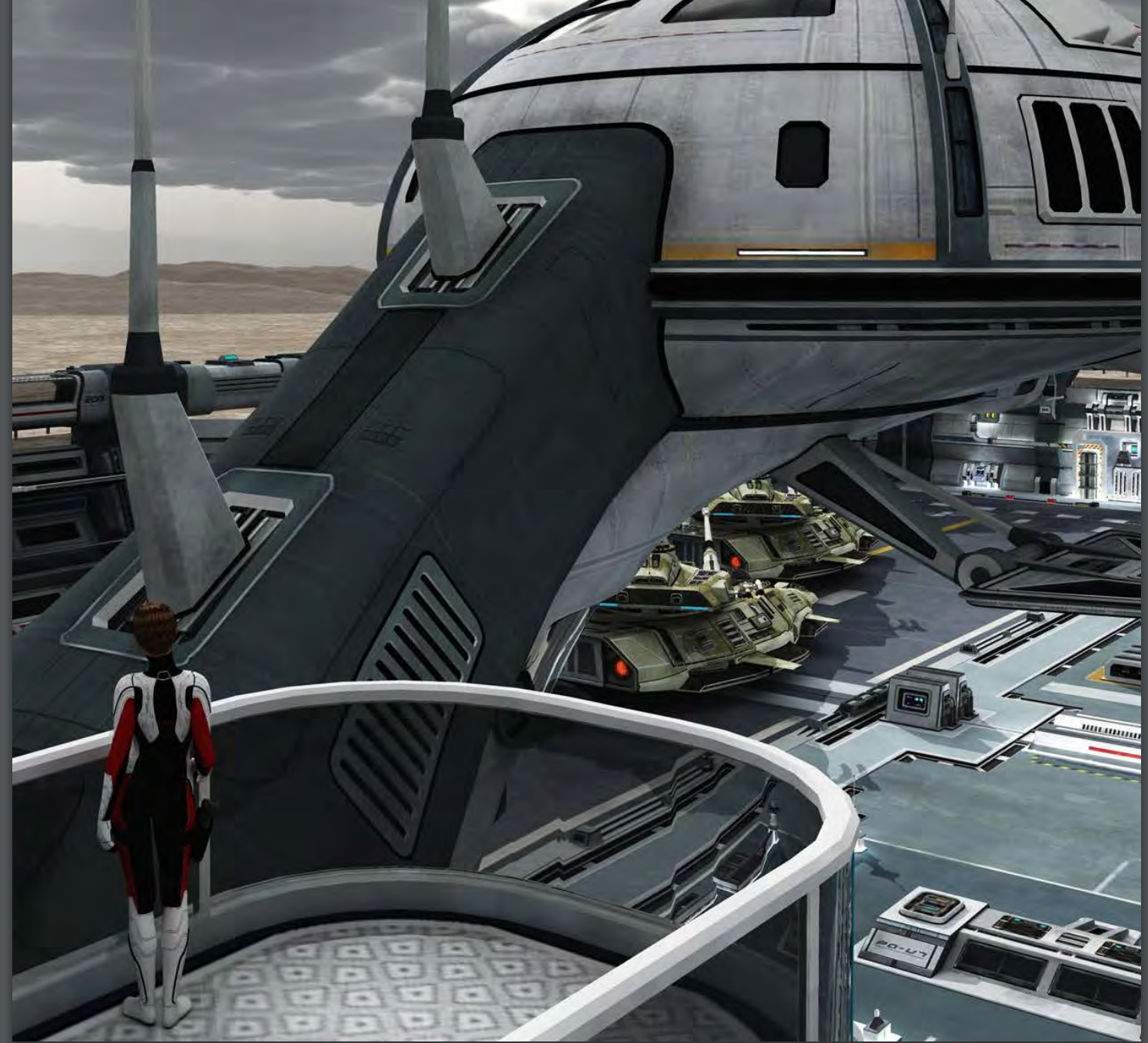 What is clear throughout the work is that the service members writing these stories have a pretty good idea of what new problems might look like. Will the United States have enough juice left to launch a full-scale amphibious assault against a rogue state in fifty years? Will exoskeletons create as many problems as they solve, if special weapons turn them into extremely heavy cages for the Marine trapped inside? Will some states continue to develop and deploy autonomous weapons, even if there are major humanitarian concerns? And will small drones, already in the hands of insurgents in 2017, be an unavoidable threat to all future patrols, for all foreseeable futures? (Militaries have predicted worse futures).

Yet for all the new ways of war covered by the forecast, there are a couple major omissions. Nuclear weapons are left out of consideration, though it’s perhaps understandable that no one expects there to be much of the world as we know it left after the big one hits. More interestingly, the conflicts are focused outward: crisis in Lagos, civil war in Taiwan, rogue state in North Africa. Even when there’s a direct attack on the interior of the United States, the corn plague in “Montgomery Crisis,” the fight isn’t a foe in the Americas, it’s over the Strait of Gibraltar. For authors writing in 2017, it seems the Corps will always keep an eye out for conflicts abroad.