General Dynamics Electric Boat has been awarded a $5.1 billion contract to undertake the detailed design work for the U.S. Navy’s next generation of ballistic missile submarines – the Columbia-class (SSBN(X))

According to the Pentagon notification, “the Integrated Product and Process Development (IPPD) contract award is for the design, completion, component and technology development and prototyping efforts for the Columbia-class Fleet Ballistic Missile Submarines (SSBNs). This work will also include United Kingdom (U.K.) unique efforts related to the Common Missile Compartment.

“The Columbia-class submarine is the most important acquisition program the Navy has today,” said Secretary of the Navy Richard V. Spencer in a statement.
“This contract represents a significant investment in maintaining our strategic deterrent into the future, as well as our ongoing partnership with the United Kingdom.”

In a statement, Rep. Joe Courtney (D-Conn.) praised the work of the Navy and EB.

“Every day, countless individuals – from the shipyard to suppliers to workforce development experts – are working to ensure that our region is ready to meet the multi-generational challenge of designing and building this new submarine,” he said.
“This milestone today is a testament to their work, but a reminder that we still have a lot to do as Congress and the Navy look to grow our undersea fleet.”

The contract award follows a January Milestone B approval for the program to enter the detailed design and engineering phase of the program.

“A program this large and complex will undoubtedly face financial and technical challenges in the years ahead, but it will eventually result in what is arguably the most advanced weapon system ever developed,” Eric Wertheim, author of U.S. Naval Institute’s Combat Fleets told USNI News on Thursday.

The recapitalization of the ballistic missile submarines is the Navy’s top acquisition priority and is poised to make a major dent in the Navy’s shipbuilding accounts. 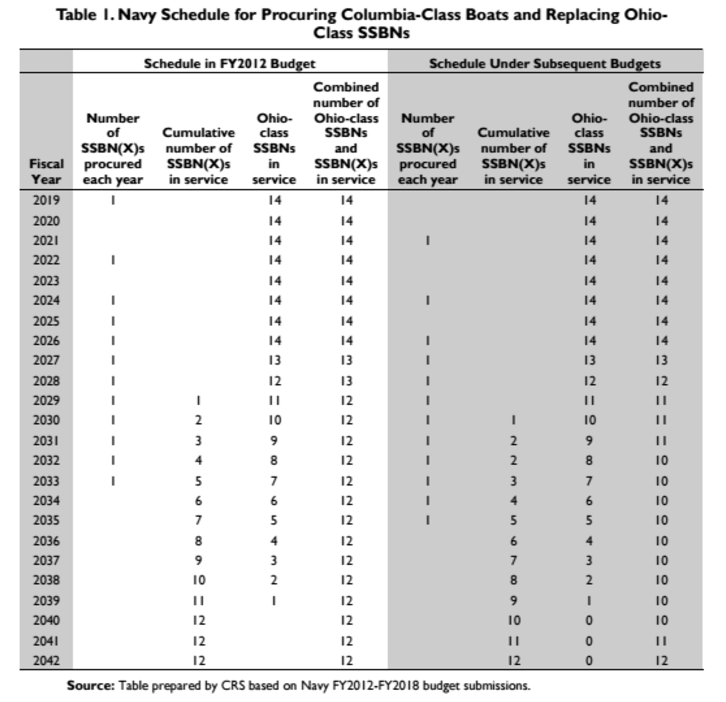 According to a recent Navy cost estimate from earlier this year, the lead ship is expected to cost $10.4 billion – including $4.2 billion in detail design and non-recurring engineering work, as well as $6.2 billion for ship construction – and follow-on ships to cost $5.2 billion, all in 2010 dollars, USNI News reported at the time of the milestone B award.

An August estimate of the total program cost obtained by the Congressional Research Service put the total cost of the program at $122.3 billion in 2010 dollars.
The class of 12 boomers will replace the current class of 14 Ohio-class ballistic missile submarines as part of the U.S. nuclear deterrent triad along with ground-based intercontinental ballistic missiles and nuclear bombers.

The Navy estimates the future USS Columbia will be operational by 2030.