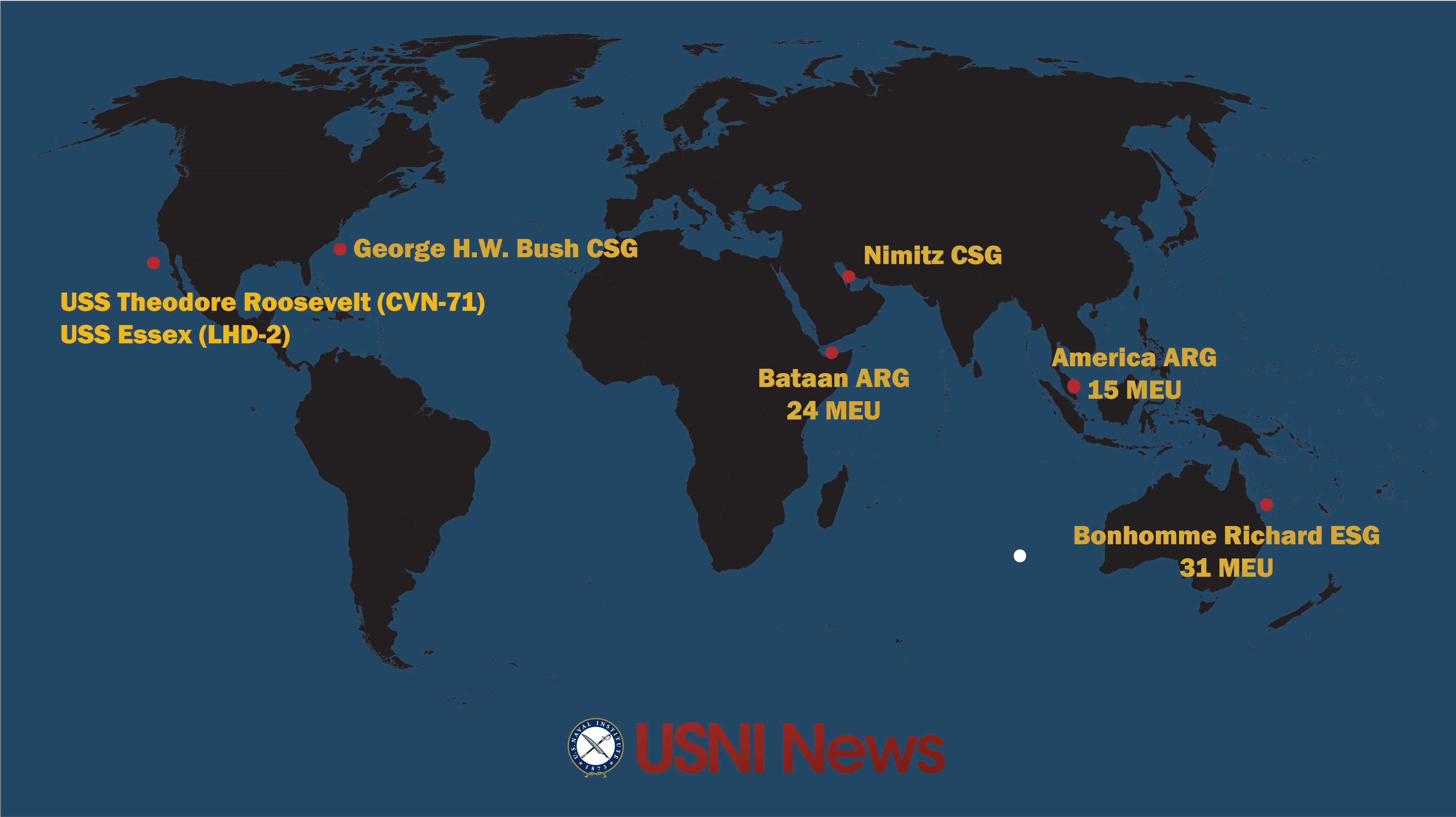 These are the approximate positions of the U.S. Navy’s deployed carrier strike groups and amphibious ready groups throughout the world as of Aug. 21, 2017. In cases where a CSG or ARG is conducting disaggregated operations, the map reflects the location of the capital ship. 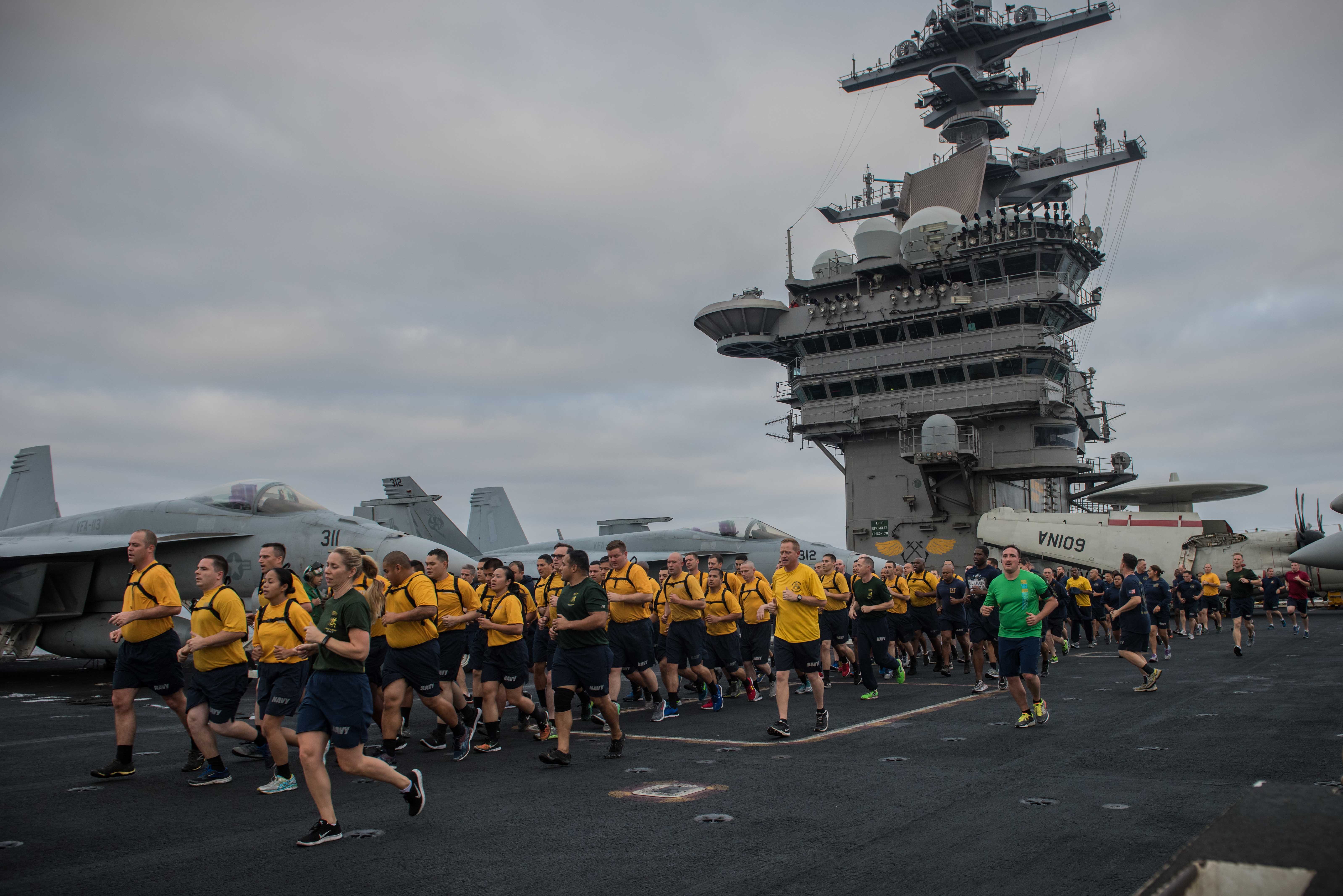 Chief selects run in formation during a 5k run on the flight deck of the aircraft carrier USS Theodore Roosevelt (CVN-71) on Aug. 17, 2017. US Navy Photo

The Composite Training Unit Exercise is usually the first time all elements of a Strike Group – ships plus air wing – come together in preparation for deployment.

USS John McCain (DDG-56) is pier-side at the Changi Naval Base after a collision with a Liberian-flagged chemical tanker in the Strait of Malacca early in the morning of Aug. 21. The collision injured five sailors and 10 are missing.

The America Amphibious Ready Group (ARG) and 15th Marine Expeditionary Unit (MEU) are now back in Singapore to support the crew of John McCain (DDG-56). After Singapore, they are expected to head through the Strait of Malacca and into the Indian Ocean en route the Central Command Area of Responsibility. 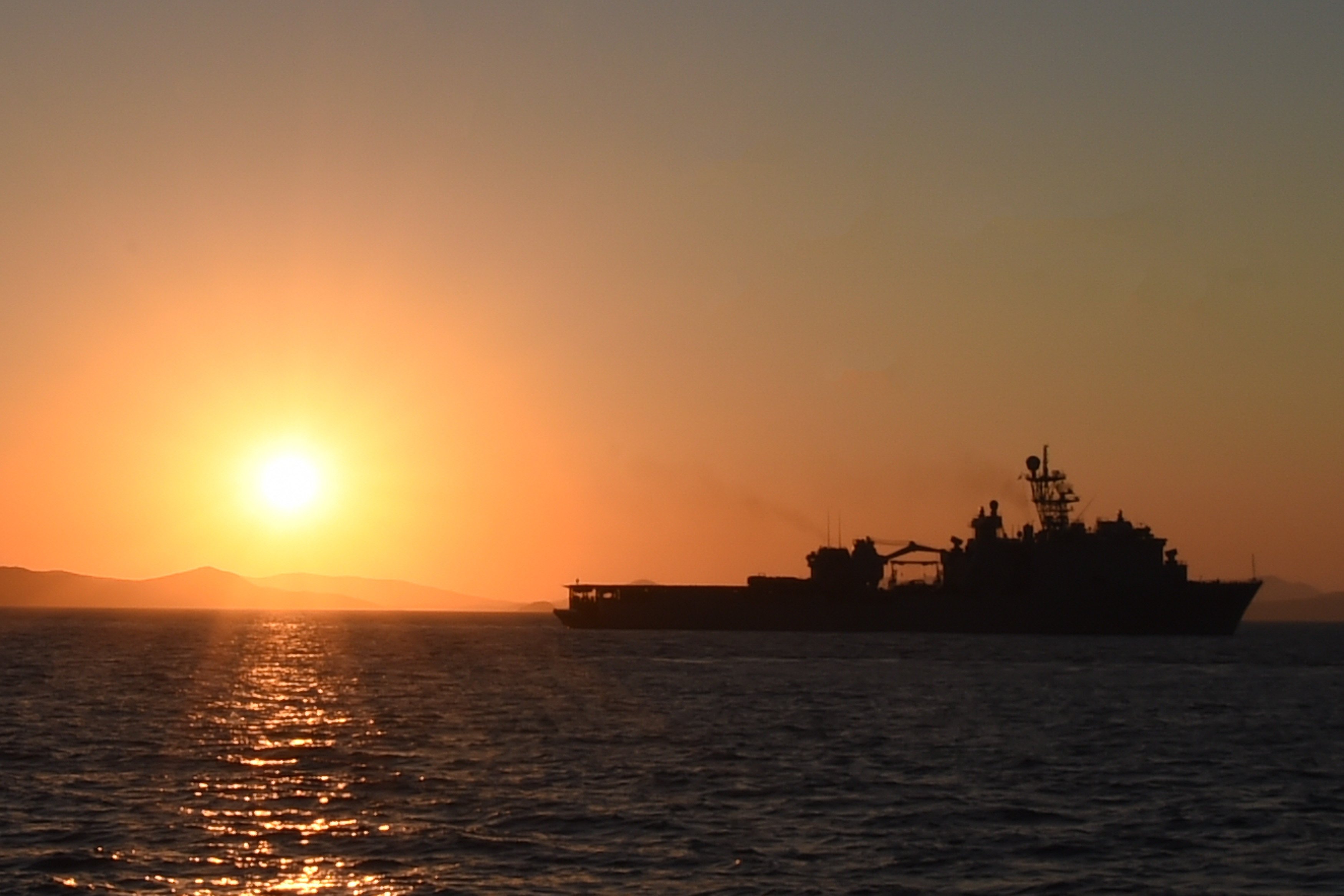 CERTEX is the last qualification step for the 31st MEU as it continues on its regularly scheduled patrol of the Indo-Asia-Pacific region. Since May, the 31st MEU has completed a series of exercises to hone its mission planning and execution capacity, beginning in Okinawa, Japan, and ending off the east coast of Australia with CERTEX.

During CERTEX Marines and sailors with the 31st MEU conducted a variety of standing missions – military tasks the MEU can plan and launch within six hours using the Marine Corps Rapid Response Planning Process. During CERTEX, leaders within the 31st MEU receive a series of scenario-based orders to execute a variety of amphibious missions – from a beach assault and helicopter-borne raid to a noncombatant evacuation operation (NEO) and humanitarian assistance-disaster relief (HADR) mission, all launched from the sea and including up to 2,200 Marines and sailors, which comprise the 31st MEU. 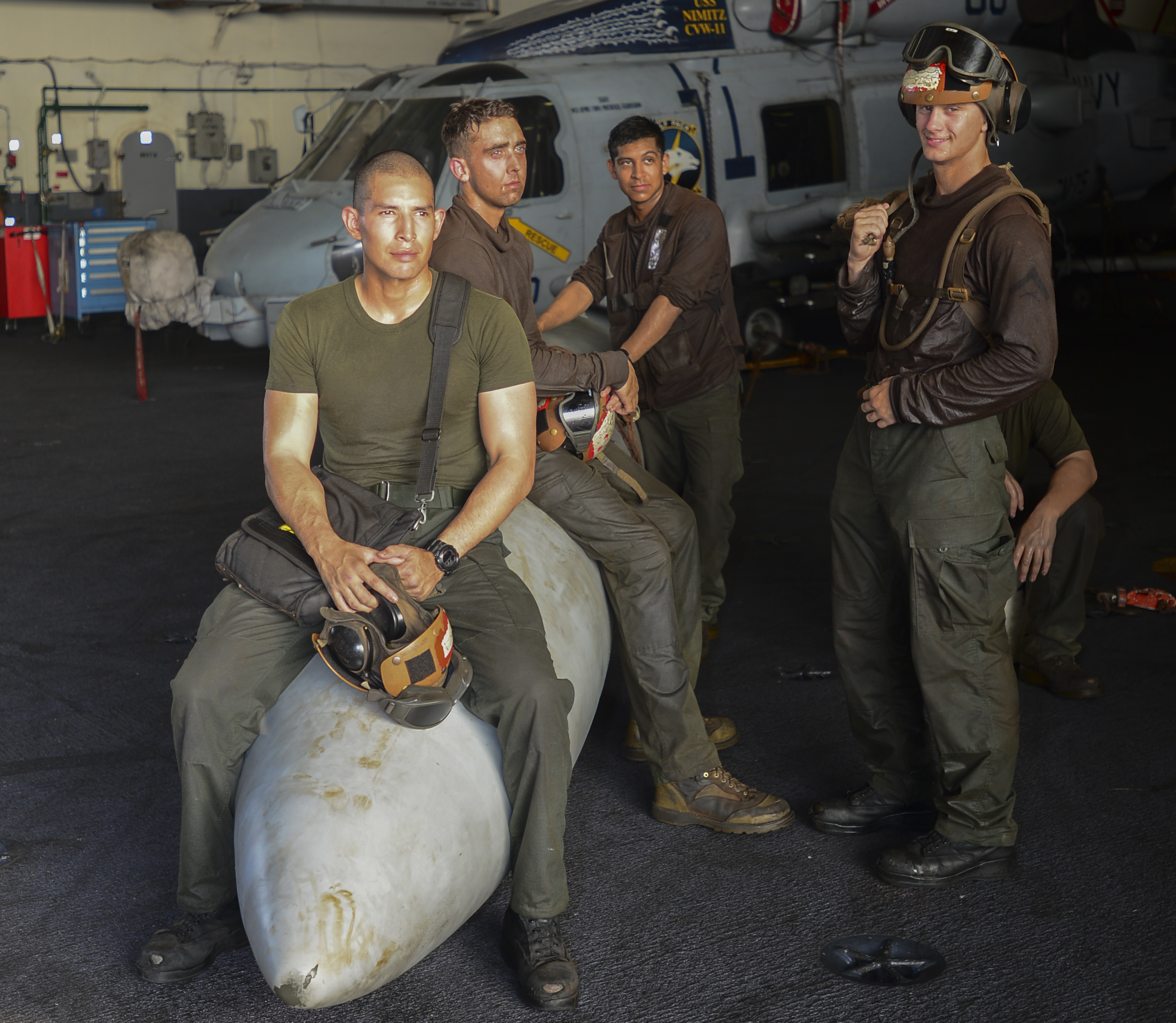 Marines take a break from their work in the hangar bay of the aircraft carrier USS Nimitz (CVN-68) on Aug. 20, 2017, in the Persian Gulf. US Navy Photo

The Nimitz Carrier Strike Group commenced combat flight operations in early August, conducting anti-ISIS strikes in Syria and Iraq in support of Operation Inherent Resolve.
On Aug. 13, for the second time in a week, an Iranian drone attempted to interfere with flight operations on USS Nimitz (CVN-68). 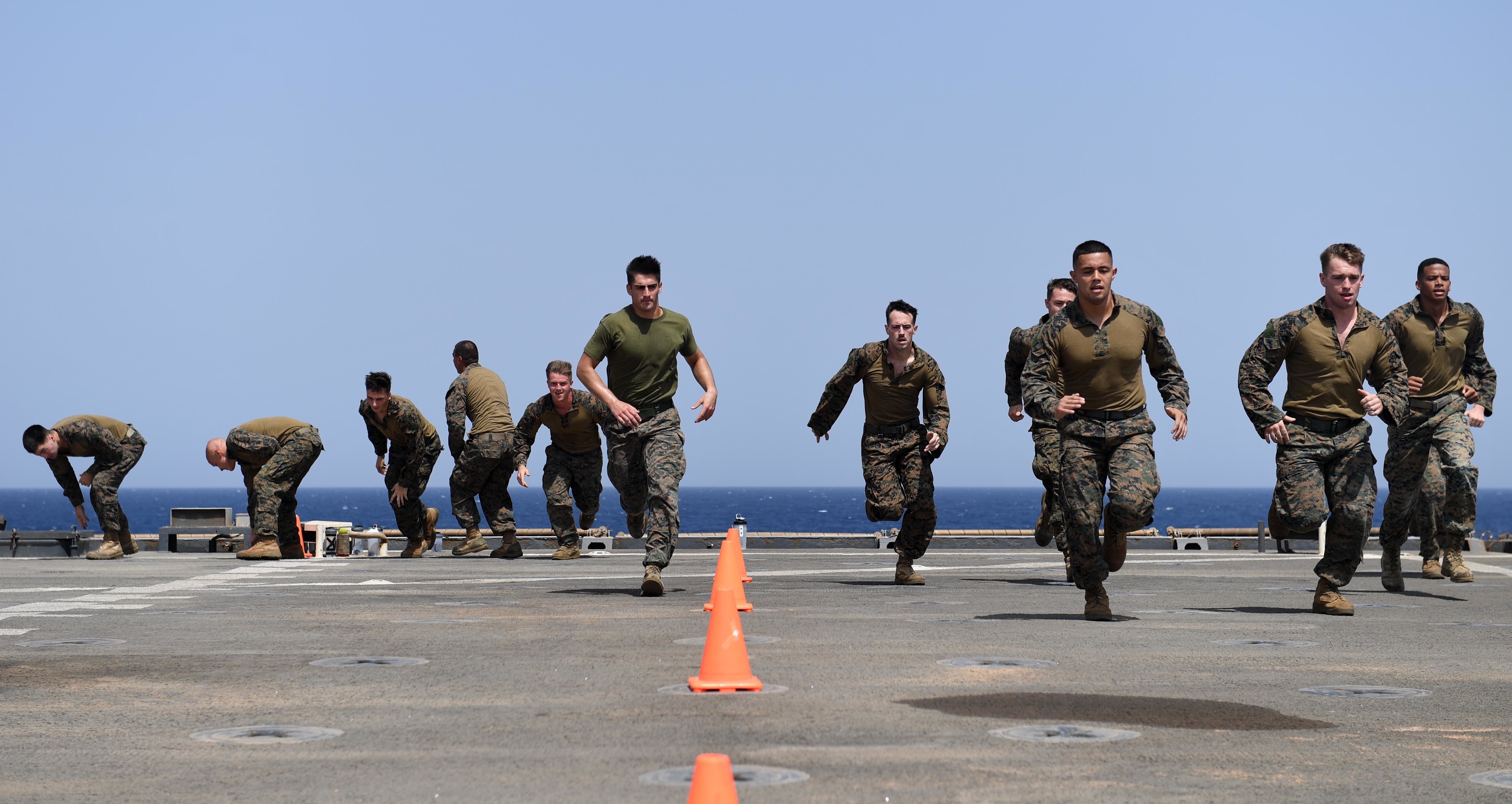 The Bataan Amphibious Ready Group with the 24th MEU is operating off Yemen, after arriving in theater in March.

They are expected to depart within the next ten days for the Mediterranean Sea before finishing their seven-month deployment and returning to the East Coast of the U.S. in September. 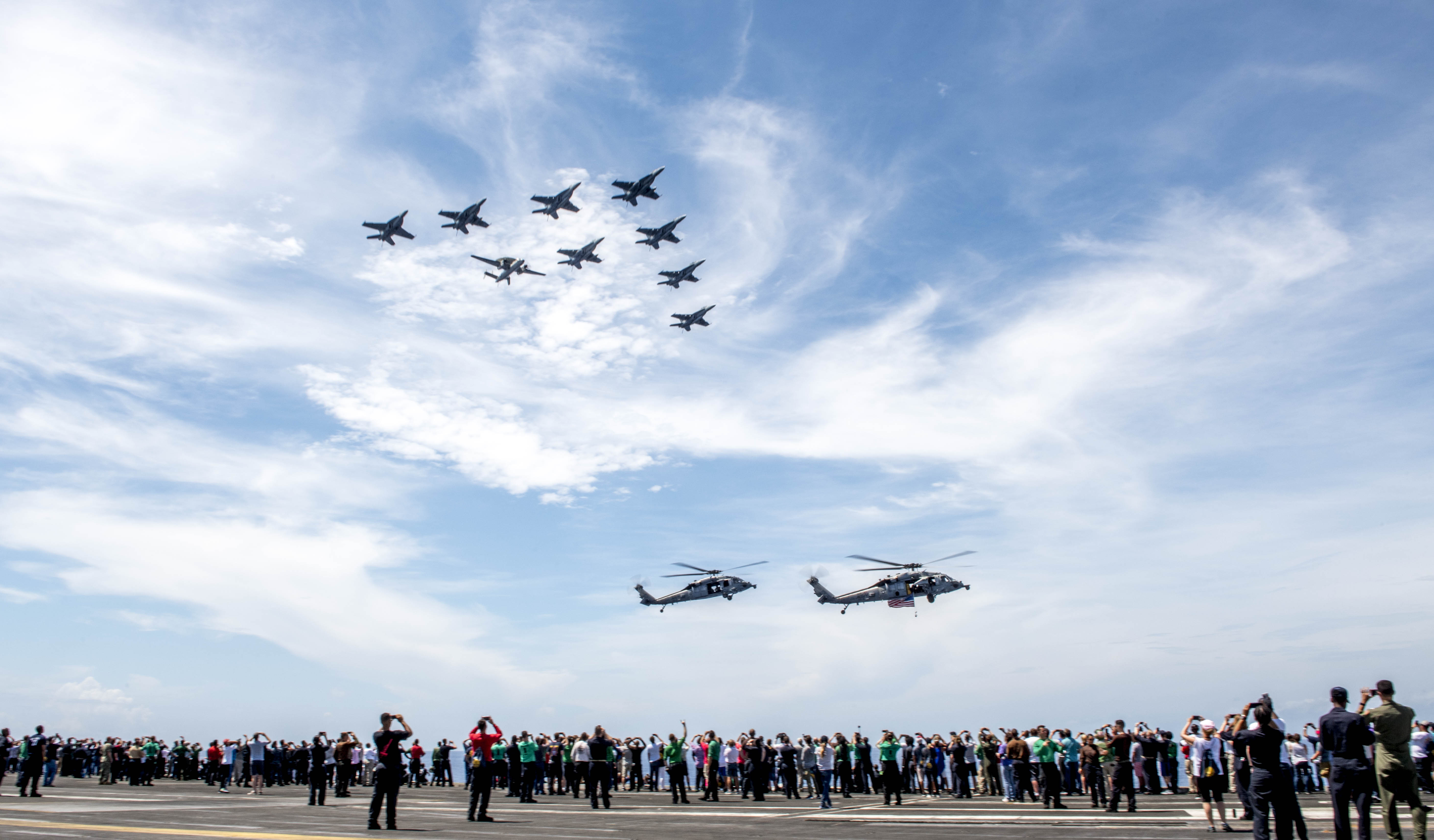 It is typical for the air wing to fly off about three to four days ahead of arrival of the ships. The squadrons of Carrier Air Wing 8 (CVW-8) returned to their bases including Naval Air Station (NAS) Oceana, Va., NAS Whidbey Island, Wash., NAS Jacksonville, Fla., NAS Lemoore, Calif. and Naval Station Norfolk on Aug. 17 and 18.