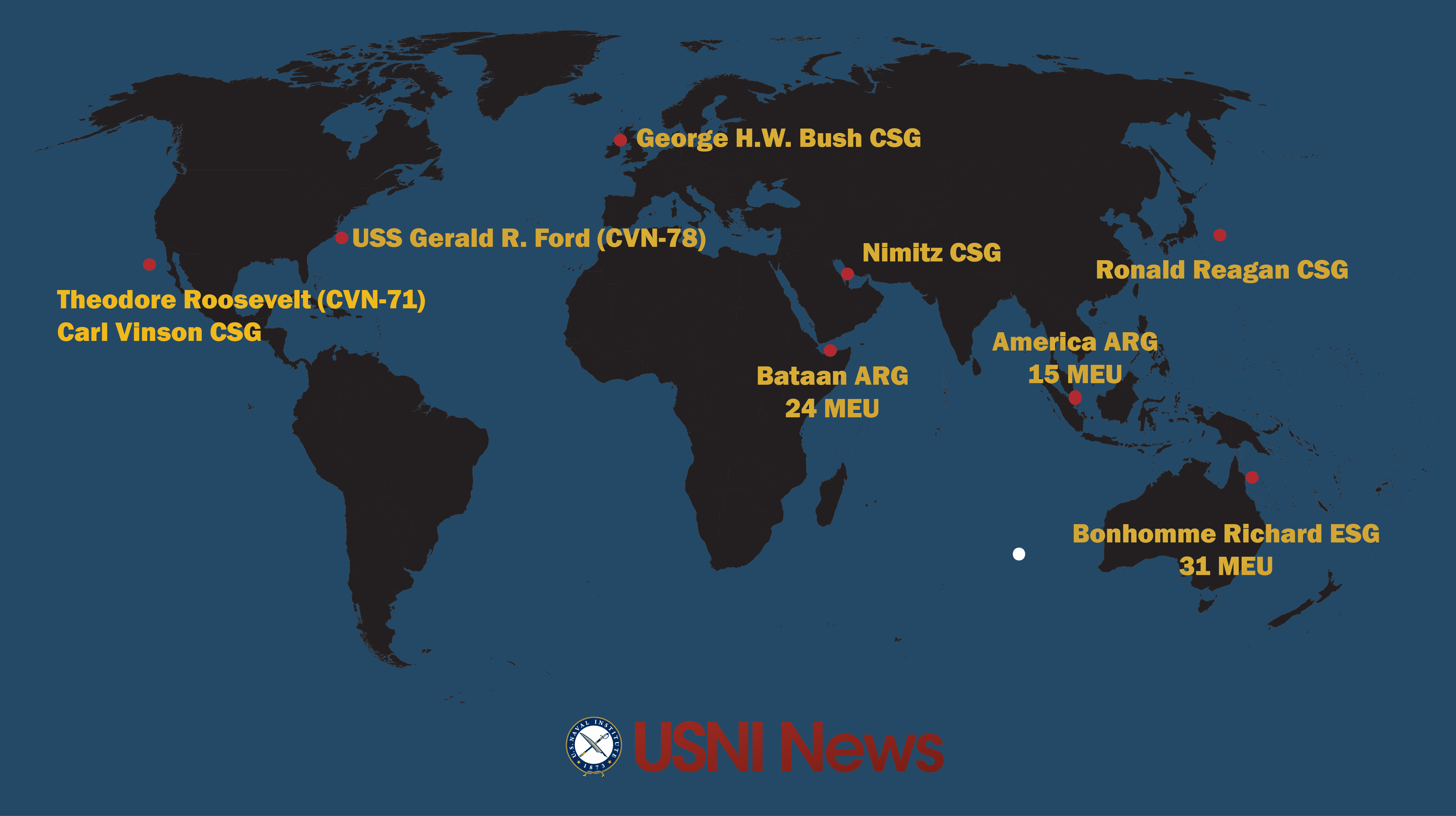 These are the approximate positions of the U.S. Navy’s deployed carrier strike groups and amphibious ready groups throughout the world as of Aug. 7, 2017. In cases where a CSG or ARG is conducting disaggregated operations, the map reflects the location of the capital ship.

In the Singapore Strait 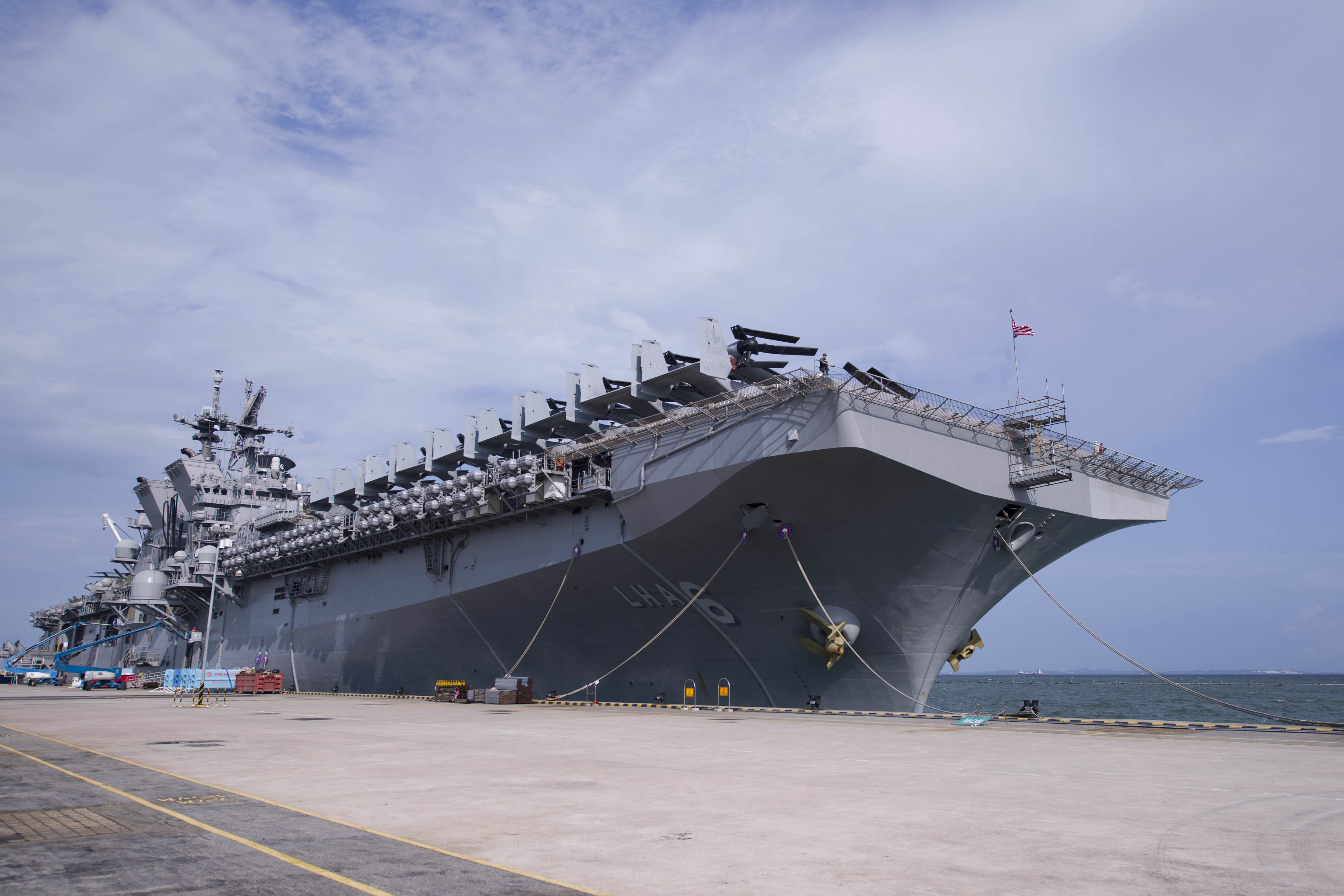 The amphibious assault ship USS America (LHA-6) is moored pierside while on a scheduled port visit to Singapore. US Navy Photo

The America Amphibious Ready Group (ARG) and 15th Marine Expeditionary Unit (MEU) are in port in Singapore at the Changi Naval Base. Changi was opened in 2004 and can accommodate large ships pier-side, including aircraft carriers. It is strategically located and used regularly by U.S. Navy ships transiting the route between the Pacific and the Indian Ocean.

The America ARG and 15th MEU will eventually relieve the Bataan ARG in the Middle East.

A Marine MV-22 with 26 people aboard crashed Saturday. The aircraft had launched from the USS Bonhomme Richard (LHD-6) and was conducting regularly-scheduled operations when it crashed into the waters on its final approach to the USS Green Bay (LPD-20). 23 people were recovered safely. Three are presumed lost at sea. There are reports that Green Bay’s flight deck was damaged. 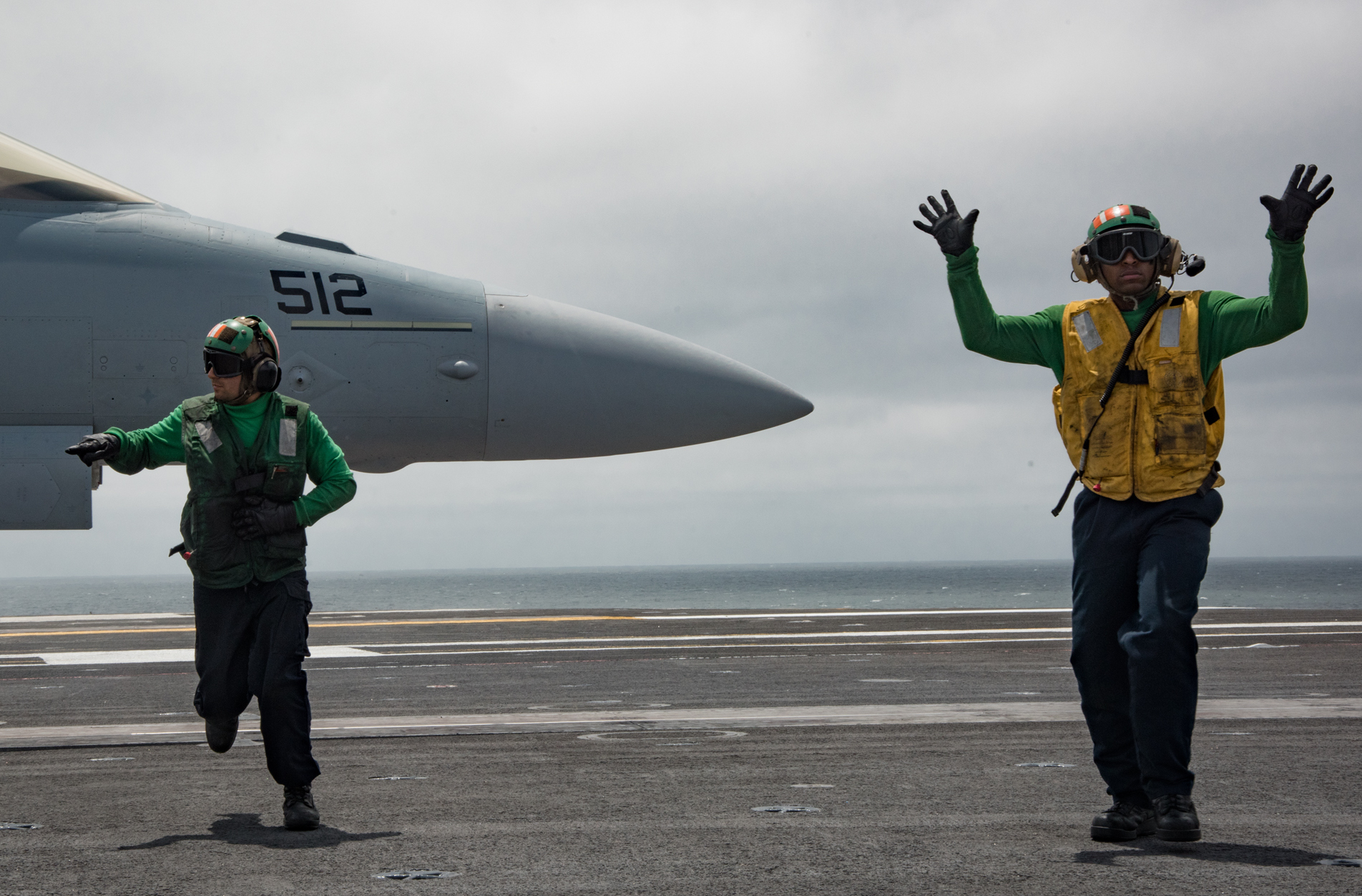 An E/A-18G Growler assigned to the “Vikings” of Electronic Attack Squadron (VAQ) 129 prepares to launch from the Nimitz-class aircraft carrier USS Carl Vinson (CVN 70) on July 31, 2017. US Navy Photo

The COMPTUEX is usually the first time all elements of a strike group – ships plus air wing – come together in preparation for deployment.

An F/A-18 Super Hornet assigned to the “Royal Maces” of Strike Fighter Squadron (VFA) 27 launches from the flight deck of the aircraft carrier USS Ronald Reagan (CVN-76) on Aug. 4, 2017. US NAvy Photo

The Ronald Reagan Carrier Strike Group is operating off the coast of Japan. 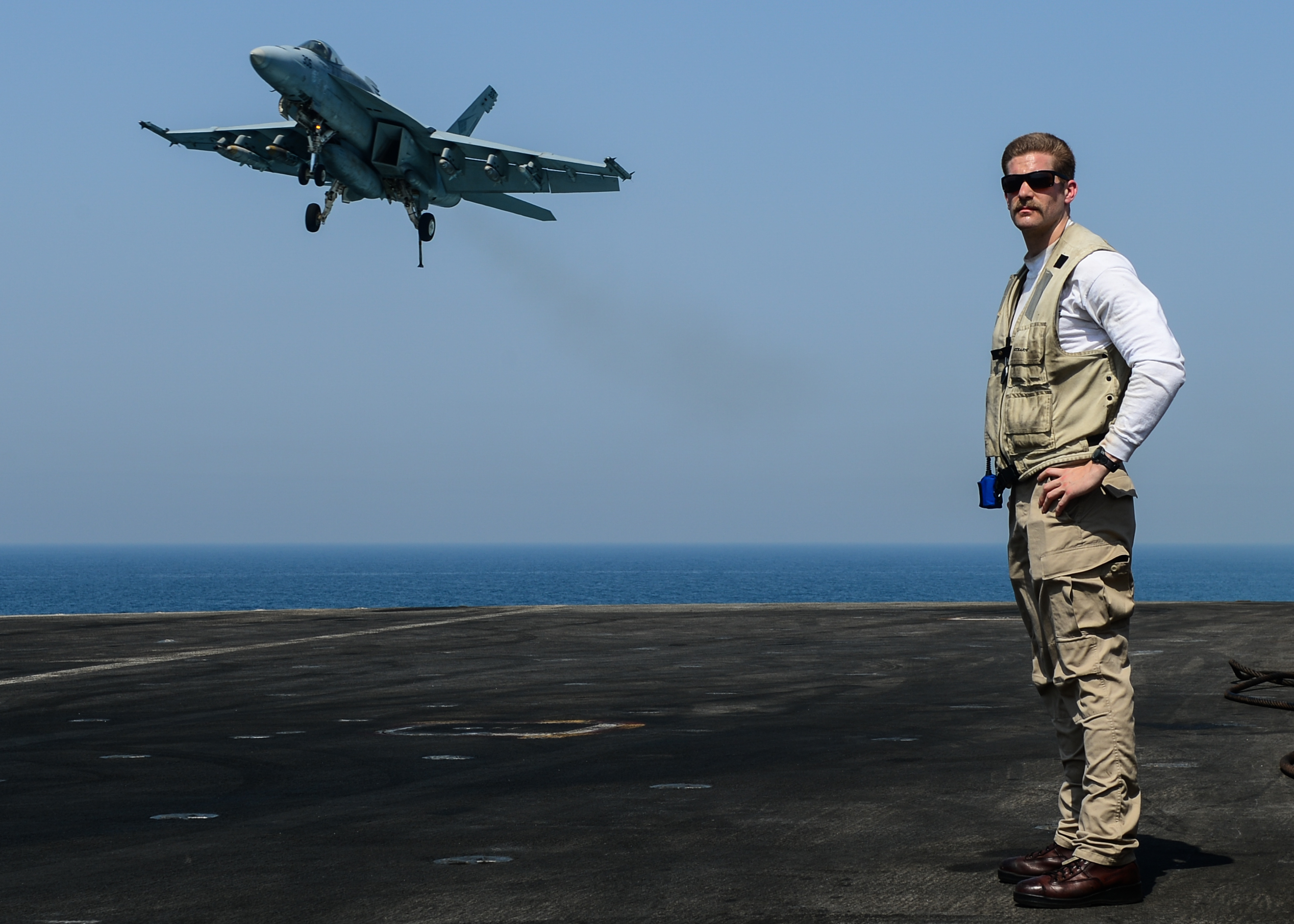 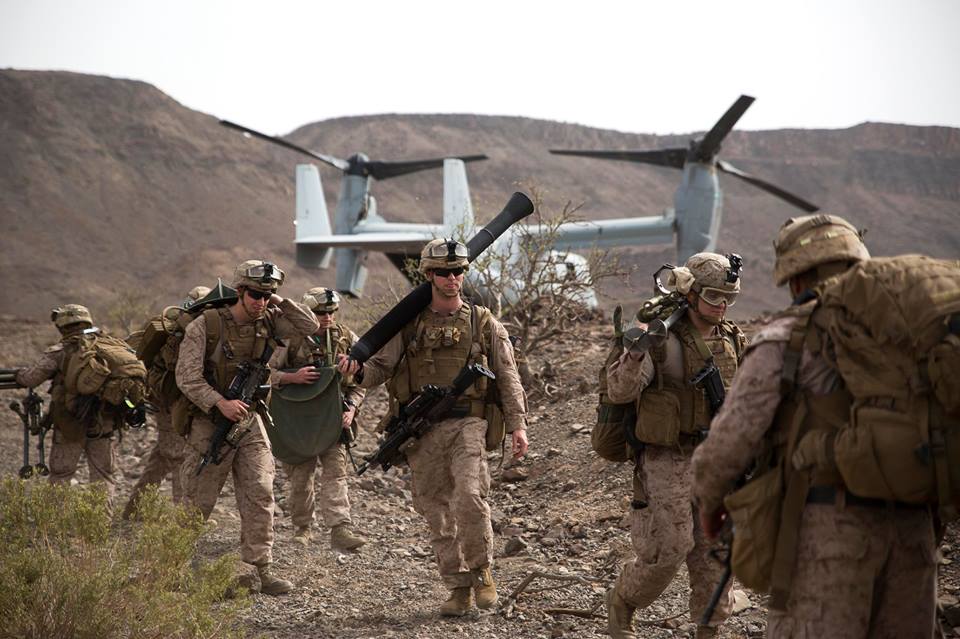 Marines with the 24th Marine Expeditionary Unit stay mission ready as they conduct sustainment training while deployed with the USS Bataan (LHD-5). US Marine Corps Photo

The Bataan Amphibious Ready Group with the 24th Marine Expeditionary Unit is operating off Yemen, after arriving in theater in March.

The America ARG and 15 MEU – currently in the Western Pacific – will ultimately relieve the Bataan ARG on station in the Middle East. Bataan ARG and 24 MEU are due to return home to Norfolk in September. 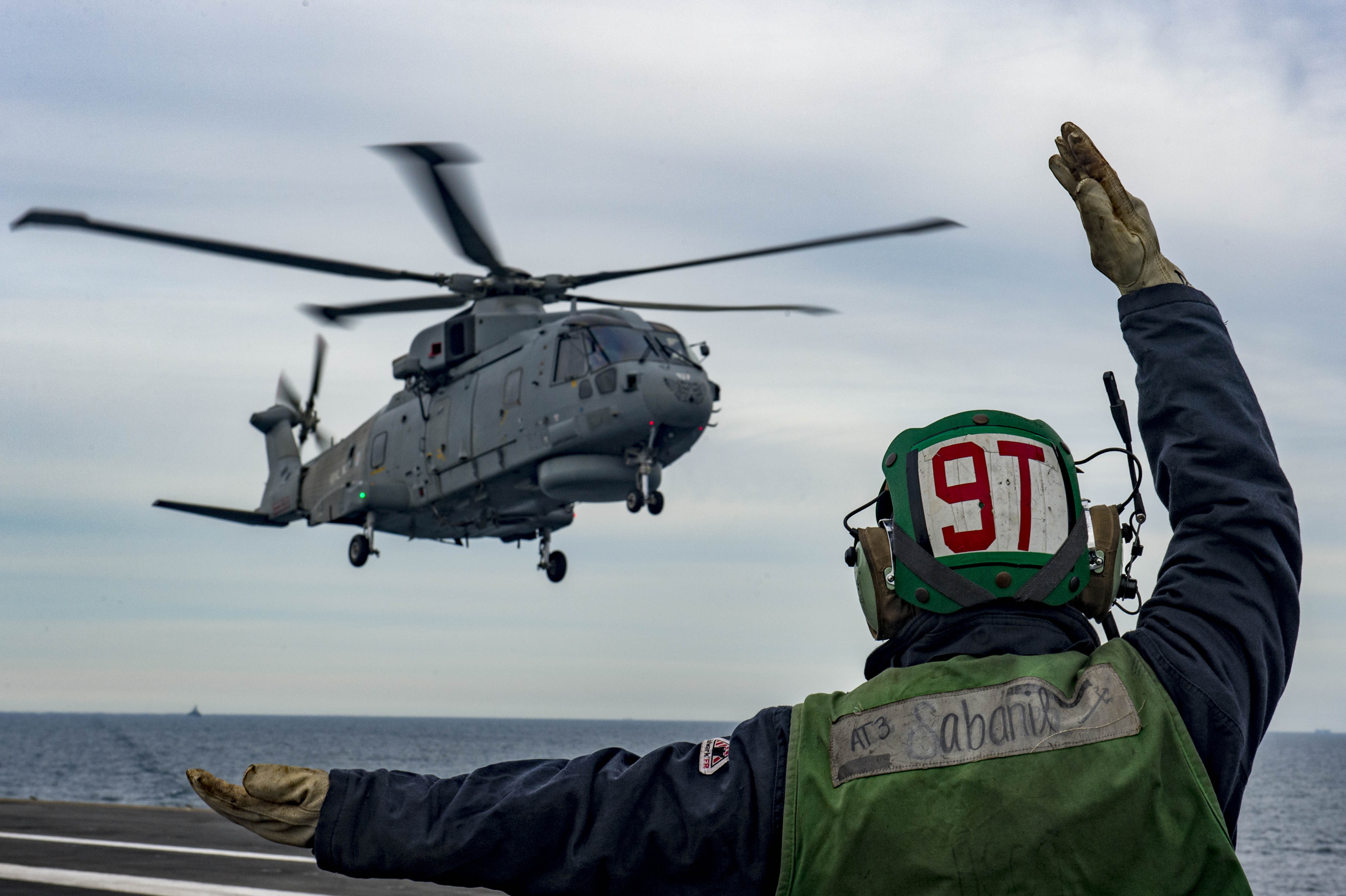 The George H.W. Bush Carrier Strike Group is operating off the coast of Scotland.

The Bush CSG is taking part in early August Exercise Saxon Warrior 17 in the North Atlantic Ocean to “demonstrate Allied interoperability and collective defense through power projection from the sea.” Nations participating in Saxon Warrior 17 include: Germany, Norway, Sweden, the United Kingdom and the United States. Saxon Warrior was last held in 2011.