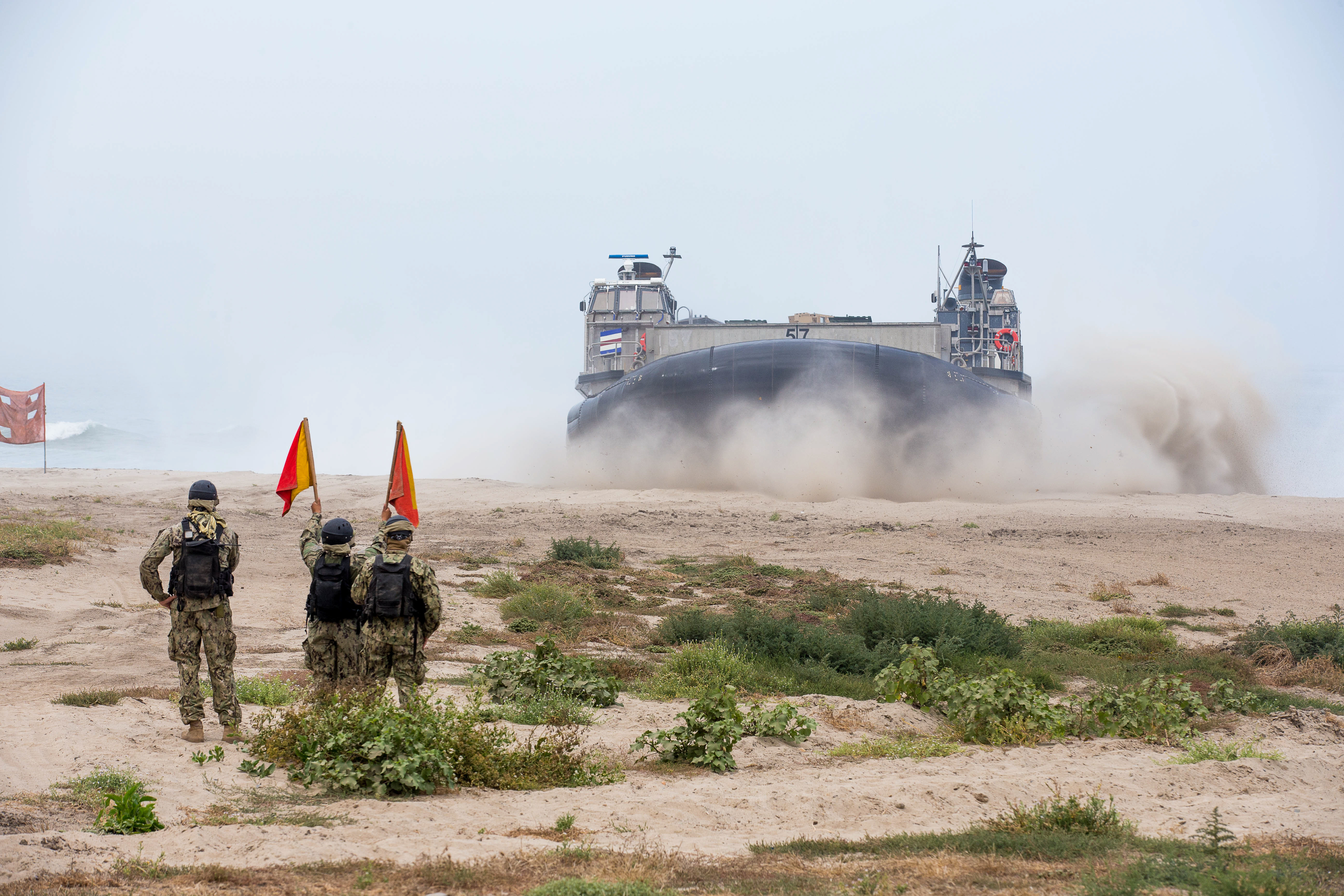 That “skin-to-skin” mooring, which provides a logistics sea base, lasted longer than previous iterations of the exercise as the ships didn’t have to separate due to rougher seas, officials said. With just several feet separating them, both ships remained connected by a vehicle transfer ramp for four straight nights.

During the previous exercise, in 2014, swells pushed the Pacific beyond Sea State 2 at times, requiring the ships to separate and moor together when sea conditions eased, all which takes up time and eats up ships’ crew days, officials said.

Not this year. Dahl and John Glenn remained together until the afternoon of July 11. “That was a huge win,” Samson Avenetti, I MEF’s maritime prepositioning force analyst, told USNI News.

This year’s calm seas also allowed for pre-staging of equipment on John Glenn’s’ raised vehicle deck, which helped double the amount of combat vehicles and equipment loads removed from Dahl and transported to shore than in 2015.

During Pacific Horizon 2015, held in October 2014, Dahl moored with USNS Montford Point (ESD-1) off the coast. Together with equipment offloads from USNS Pfc. Dewayne T. Williams( T-AK-3009), I MEF moved a total of 132 vehicles via 34 LCAC loads to shore during that exercise, Avenetti said. 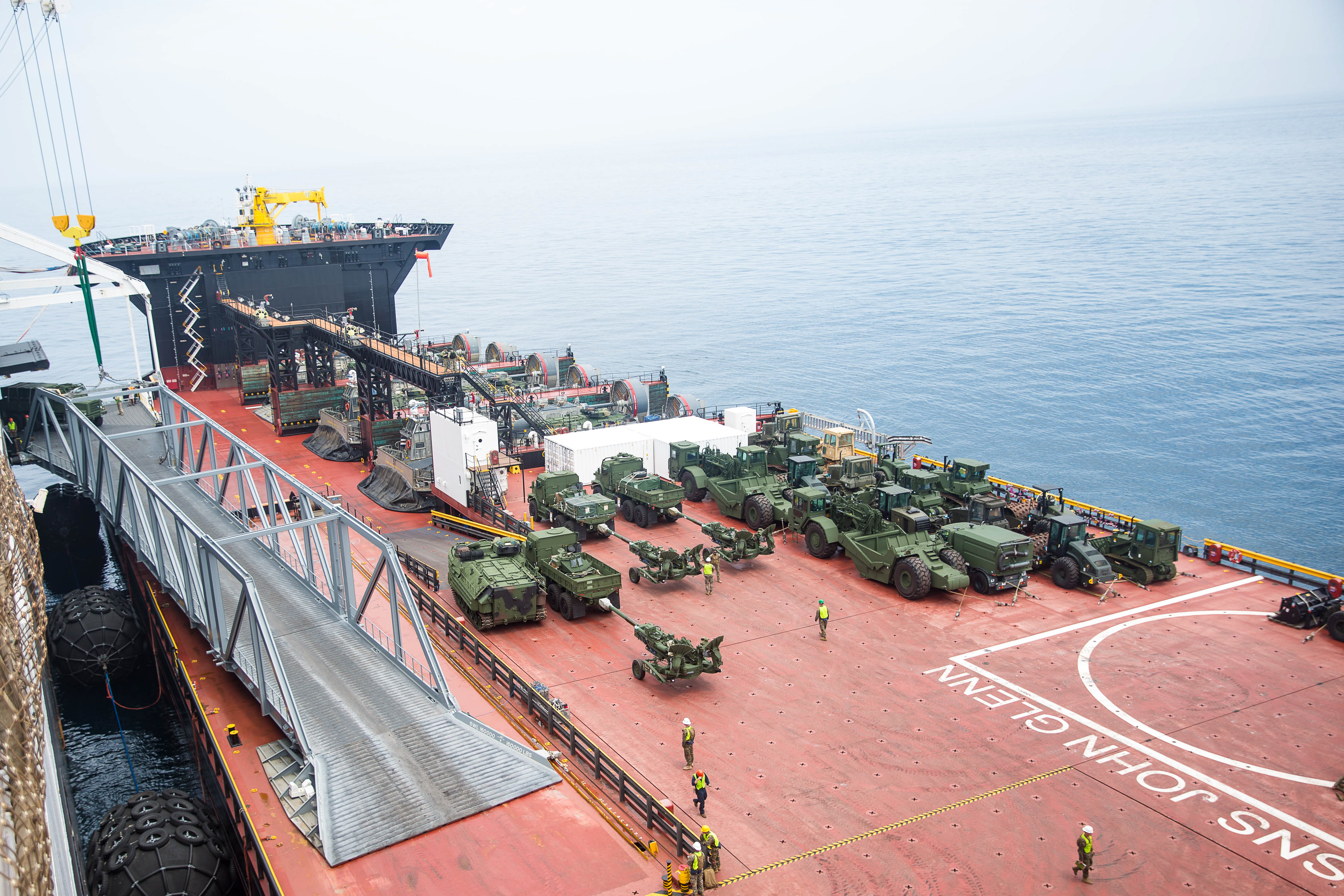 This year, Marines and Navy personnel moved 289 pieces of rolling stock along with 14 containers off Dahl and sent them ashore in 83 LCAC runs, plu one utility landing craft he said. “In four days, we did 72 loads,” compared to 34 loads taken to Camp Pendleton’s Red Beach training area via LCACs over a three-day period in 2015.

The LCAC loads carried by Assault Craft Unit 5 included 72 loads of vehicles as well as containers. Navy Seabeds and their dossers helped keep the shoreline level during those busy days, work likely replicated this week during the retrograde phase.

The weekend began work to reconstitute all the vehicles and gear removed from the ships for a five-day backload operation after the ships moored together, skin-to-skin, on July 16. Avenetti said Marines would do repairs if needed for every vehicle and equipment and do a fresh-water rinse aboard John Glenn before each item is stowed again on Dahl.

“The main focus of Pacific Horizon ’17 is to continue to develop our assembly and staging operations team with Navy and Marine Corps integration in the MPF program,” Lt. Col. Chad Dodd, a I MEF logistics officer, told USNI News while observing LCAC operations at the sea base on July 11. “You certainly learn something new every time.”

About 500 Marines and 150 Navy personnel, along with several Army reservists, are participating in Pacific Horizon, which runs through July 23, Dodd said. Pacific Horizon also provides hands-on preparation for I MEF personnel and others who will participate in Native Fury, an annual, joint over-the-shore logistics exercise to be held in the United Arab Emirates. 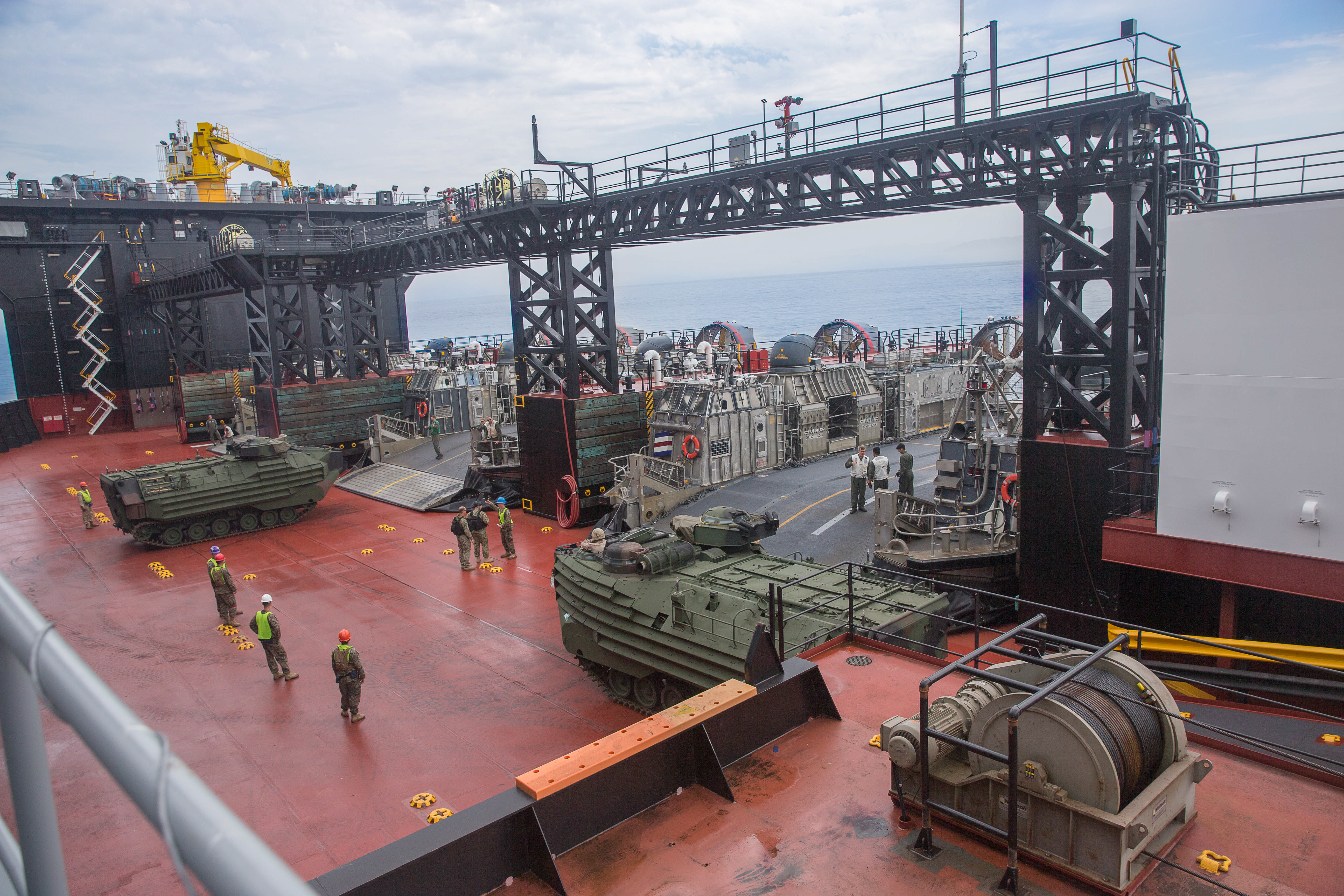 Like other ships in the Maritime Prepositioning Force, Dahl is heavily packed with combat and logistics support equipment to support Marines for a wide range of operations. This year, I MEF pulled out a wide range of equipment used across the Marine air-ground task force, from M1A1 Abrams tanks, armored recovery vehicles and Humvees to bulldozers, generators and aviation equipment. “We tried to find some unique items just to demonstrate what’s across the ship,” Dodd said.

The exercise is helping refine standard operating procedures and build skills and expertise, especially for Marines and Navy personnel less familiar with MPF operations. “We have to learn something from each exercise and implement that into the SOP,” Dodd said. The presence of John Glenn, a newer ship in the services’ sea-basing force, lets Marines learn new things about what the Military Sealift Command’s two ESD ships can do, including LCAC operations with its three LCAC lanes.

John Glenn “gives us the opportunity to try different things and test it. We know we can do LCACs; what else can we do with the ESD?” Avenetti said. “Can we do simultaneous roll-on/roll-off on the starboard side with ESD alongside the LMSR as we are doing lift-on/lift-off operations off the port side of the LMSR with containers?”

So this month, I MEF and the Navy used an LCU to receive one containers craned off Dahl to test new methods to offload containers. “There were some challenges, and we got one container off,” Avenetti said. Safety concerns precluded the second container, largely due to ocean currents and the positioning of both ships currents.

John Glenn also “helps us do selective offload more so than” using lighterage and a roll-on/roll-off ship like Dahl, Avenetti added, noting “you have a platform to pull some of the gear off and give yourself a little bit of room.”

In-steam offloading or onloading operations of ships at sea bring “a whole set of challenges,” compared to pierside operations, he added, depending on available craft including lighterage, utility landing craft (LCU) or air-cushioned landing craft (LCAC) to carry the stocks ashore. And then there’s the critical work to get vehicles, equipment and containers to the main arrival-and-assembly area and then onto the receiving units.

Navy Seabees from Naval Construction Battalion 5, based at Port Hueneme, Calif., “are down here learning about MPF operations,” Avenetti said. “They help prep the ground for that larger force coming it… They bring a tremendous capability to the MAGTF, and they need the same training as we do in conducting maritime prepositioning operations.”

Warehouse in the Field 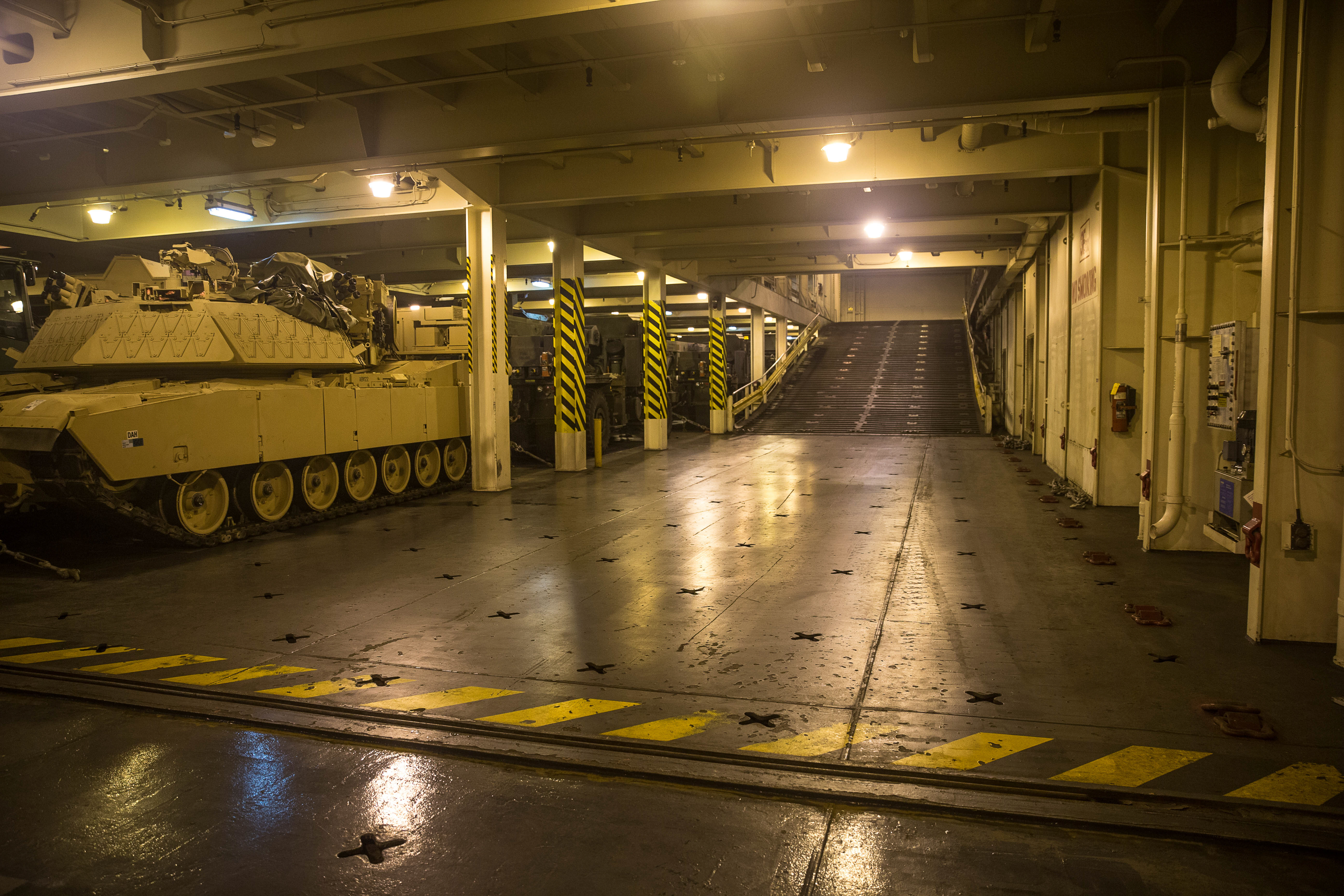 The Marine Corps has 14 ships in two maritime prepositioning ship squadrons – MPSRON-2 based at Diego Garcia and MPSRON-3 based in Guam – and operated by the Military Sealift Command. The ships deploy when needed and offload vehicles, equipment or supplies in ports or offshore for Marine air-ground task force, such as a MEF or a Marine expeditionary brigade. Each squadron carries enough stocks including food and medical supplies to support a Marine expeditionary brigade-sized force of 16,000 for up to 30 days.

Offloading a prepositioning ship like Dahl, with its seven stowage decks, is no easy feat, especially when I MEF, for this exercise, didn’t need every item that’s stowed and packed tightly aboard the ship. “It’s very much a puzzle,” Dodd said. Logisticians often refer to the game Tetris is describing how to load a ship or access particular vehicles, supplies or equipment.

Each MPF ship is loaded with a mix of vehicles, equipment and supplies that’s routinely reviewed and adjusted in three-year cycles. Every ship goes to Blount Island Command in Jacksonville, Fla., for the scheduled maintenance, and all equipment is removed, updated, repaired or replaced, and backloaded to the ship.

For Pacific Horizon, I MEF flew an Offload Preperation Party (OPP) and a MAGTF Offload Liaison Team (MOLT), direct liaison to its Arrival and Assembly Operations Group, to Hawaii to meet up with Dahl. They used that transit time to California to determine what’s aboard and prepare the equipment for the offload for Pacific Horizon, including replacing batteries, starting vehicles or doing minor repairs. Meanwhile, the AAOG set up its headquarters in tents at Camp Pendleton’s Red Beach as the MEF’s subordinate elements as well as Naval Beach Group 1 units established their arrival and assembly areas at several locations throughout the base.

Units must know what’s stocked on each ship, determine what they’ll require for the training scenario and organize ways to get those items ashore, if possible, just like if it was a real-world mission. That’s because Dahl, like other MPF ships, isn’t loaded specifically for what a deploying MAGTF may need. “Each ship is administratively loaded,” Dodd said, not combat loaded.

Vehicles stored on MPF ships often are loaded with other equipment and items, not necessarily for the vehicle’s unit. In each ship are loaded containers designated for each of a MAGTF’s combat elements: command, ground, air and logistics. Not every item may need to be offloaded to shore, however, and those that are transported ashore may need to be moved to different locations. A container may hold dozens or several hundred items that various units may need. One ship in each MPF squadron holds more than 2,200 pallets of ammunition for ground and aviation units, so discharging that equipment requires extra attention to handle and move the equipment.

Each item must be properly tracked, managed and accounted for, said Avenetti, a retired limited-duty major and mobility officer. “So how do you prep for that? I can’t wait until units start showing up to start un-stuffing these containers. I also have to protect the contents of these elements from the containers.”

“So you are running warehouse type of operations in the field, in a tactical environment, and in conditions that just aren’t favorable to conducting these type of operations, but you’ve got to do it,” he said. “And you’re giving that responsibility to people that don’t do this on a daily basis.”

“But that’s what we’re trying to do, at least on a year-to-year basis, in an MPF exercise to try and get everyone the knowledge that’s required on how to deploy the force and how to fall in on prepositioned equipment, because it’s not that easy,” he added. 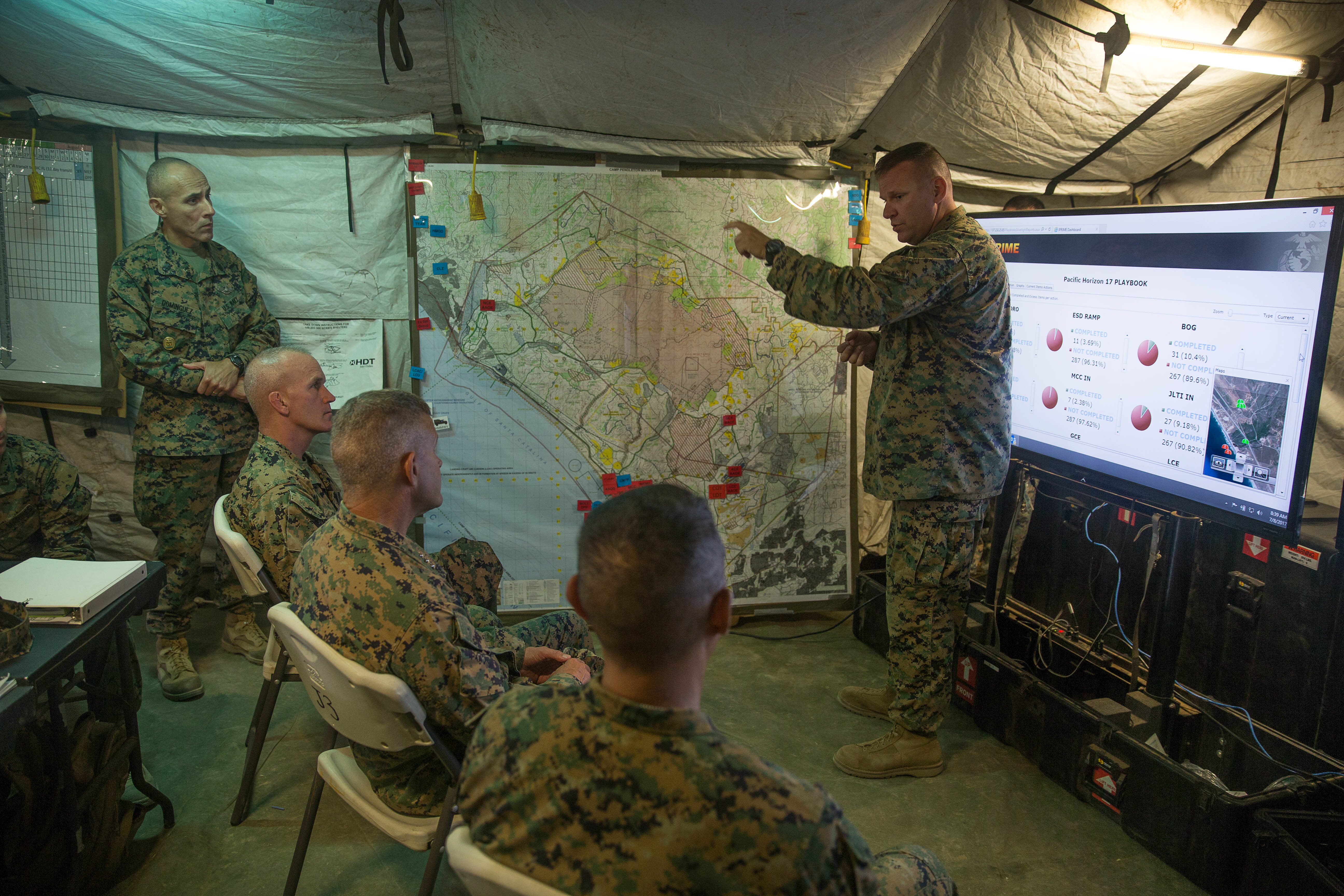 Avenetti has had a long career in maritime and expeditionary logistics. He served as I MEF’s AAOG operations officer at the start of Operation Iraqi Freedom, helping oversee the offloading of two MPF squadrons and two large amphibious task forces deployed to the Persian Gulf region. “That’s really where I cut my teeth on MPF,” he said. “These evolutions aren’t small.”

Avenetti wants Marines to have a good understanding of how ships are configured with stocks for war or a crisis-response mission so they have realistic expectations and can better plan for what they may need. “It’s not just ‘break glass in time of war,’” he said.

Over two days last week, he taught several classes to several dozen Marines from every MEF subordinate command about MPF and port operations. At one class, Marines opened four containers, staged at the base’s Camp Del Mar, so they can get an idea of what’s stowed inside, he said.

An MPF operation “is not your normal unit movement operation,” Avenetti said, and units may fall in on gear they haven’t seen before and might not be everything they need at that time. “It’s important to…get them to start thinking about, how do I as a commander make sure I bring in the right equipment at the right time and I understand how I’m going to receive it.”

“Where’s my stuff at? All these units need to figure out now: What do I have on the ship, what do I need to take with me and how do I marry all that up?” he added. “How do I ensure it’s phased-in properly? What can I afford to send on black-bottom ships afterward to accomplish my mission? Where’s all the controlled items like crypto equipment or weapons stored in the ship’s armory.”

Units also must plan for space to receive equipment, set up containers and stage for convoys, which can be “extremely challenging,” Avenetti said, including coordinating with a host nation and in overseas ports. They need a driver pool large enough to push all the gear to the subordinate units, which “are still flowing in,” he added. “They’re not coming down to the port to pick up. We’re pushing it out to them. That driver pool is an enormous responsibility.”

“How do you paint the picture to the Marines to understand the size and the complexity of MPF operations this size? This MEF isn’t going to go anywhere without its prepositioning equipment,” he said. “If you don’t know how to conduct those type of operations, we’ve lost everything we’ve gained.”

“Learn it now. Figure it out now. Go through the challenge now. Don’t wait until we have to do it for real, because it’s eye-opening,” he added.