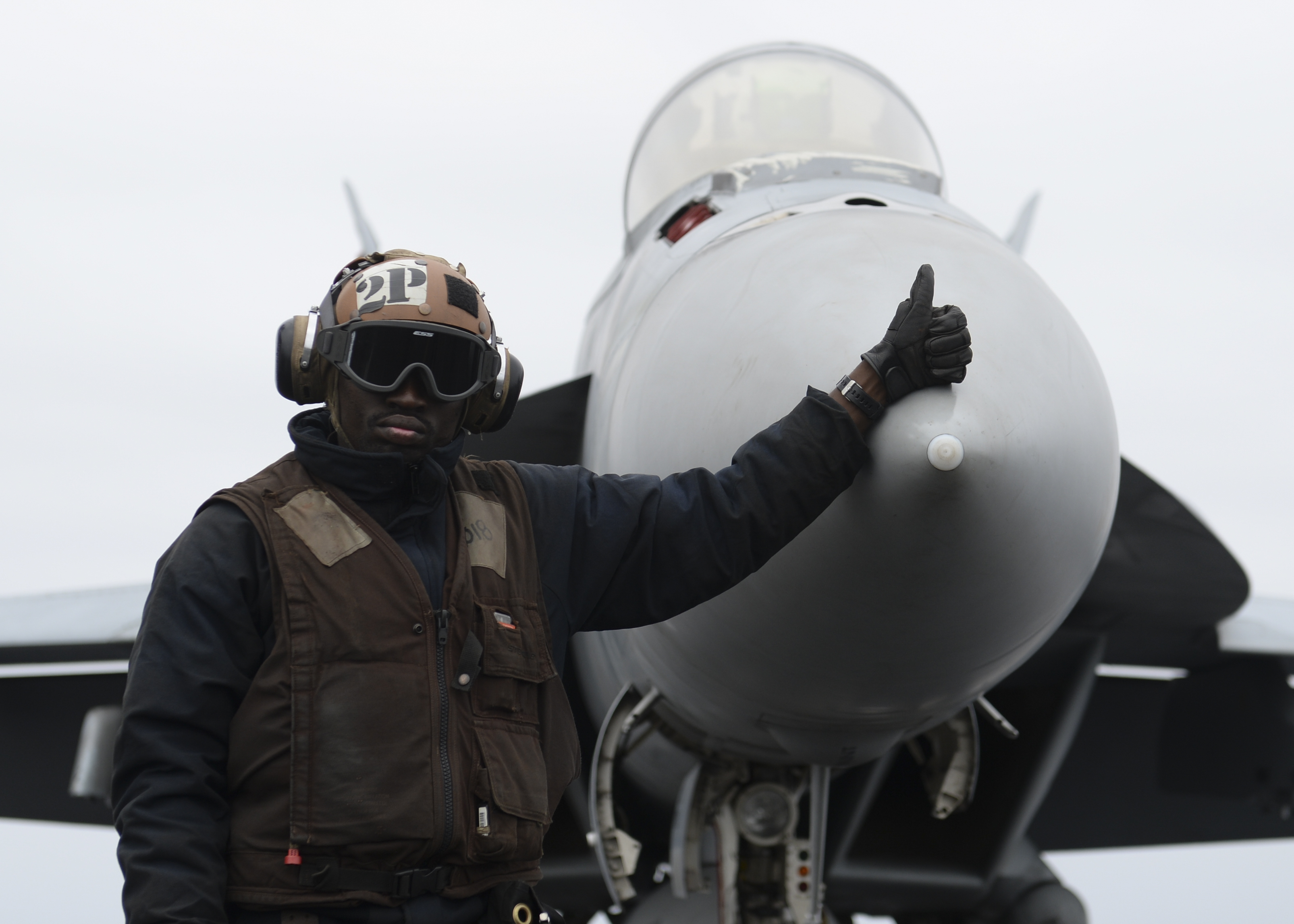 Airman Michael Nywair signals that an F/A-18E Super Hornet from the Argonauts of Strike Fighter Squadron (VFA) 147 is ready aboard the aircraft carrier USS Nimitz (CVN-68) on June 7, 2017. US Navy Photo

WASHINGTON, D.C. — The Navy intends to buy at least 80 more Boeing F/A-18E-F Super Hornets over the next five years to address its fighter shortfall, a change from its previous on-the-books plan to zero out the aircraft program beginning next year, service officials said in congressional testimony today.

The Navy’s written testimony to the Senate Armed Services seapower subcommittee notes the “Fiscal Year 2018 President’s Budget requests $1.25 billion in [the Navy’s aircraft procurement account] for 14 F/A-18E/F Super Hornet aircraft” and that, “with the support of Congress, we will also procure a minimum of 80 additional Super Hornets across the Future Years Defense Program (FYDP) and continue modernization plans to address continuing warfighter demand for advanced tactical aircraft. These additional procurements begin to mitigate the decline in [the Department of the Navy’s] strike fighter inventory and enable older aircraft to be pulled from service for mid-life upgrades and rework to extend their service life.”

Though the services typically include in their budget requests a five-year projection of spending plans, this year Pentagon officials told reporters during the budget rollout that any out-year numbers were speculative and in many cases simply maintained current program levels. They said an ongoing defense strategy review would inform future year needs and render any current projections moot – and the Navy, as a result, took the FYDP projections out of its budget highlights book but not from its more detailed justification documents.

“The (defense) secretary has not spent any time at all looking at anything beyond FY ’18,” John Roth, performing the duties of under secretary of defense, comptroller, told reporters during the budget rollout.
“You will not see a growth in force structure. You will not see a growth in the shipbuilding plan. You will not see a robust modernization program in the so-called current FYDP. And so therefore I caution anybody from trying to make any comparisons. And I’m actually of the school that it really doesn’t provide anything that’s particularly insightful.”

In contrast, the FY 2017 budget request included 14 aircraft in 2018, as was requested last month, and then zero for the rest of the years of the FYDP. 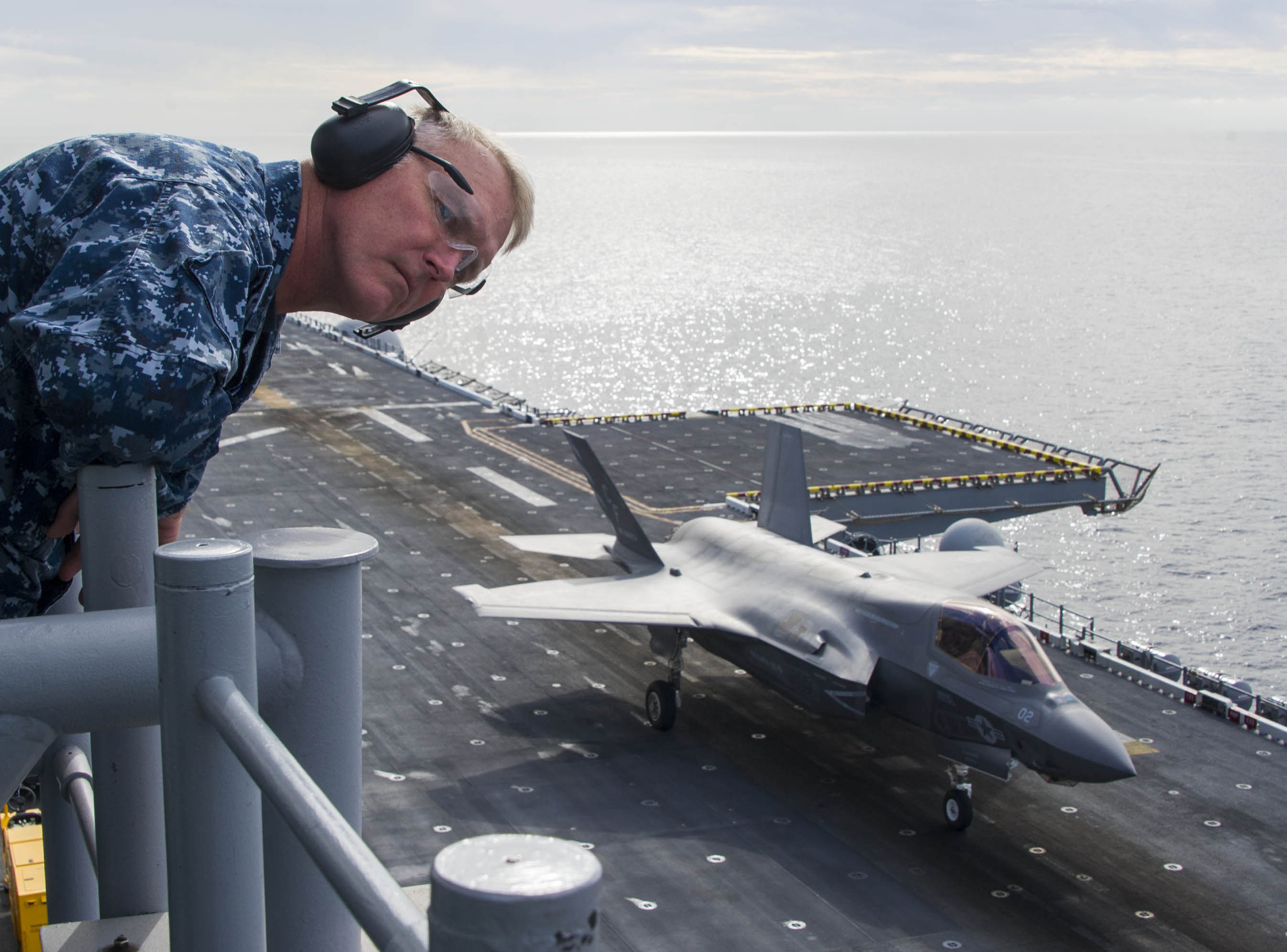 Many have speculated that future F/A-18 procurement would be a signal of the Navy moving away from the Lockheed Martin F-35C Lighting II carrier variant Joint Strike Fighter. President Donald Trump’s December 2016 tweet pitting the two airframes against one another only increased speculation – as did Defense Secretary James Mattis’ subsequent memo ordering a review of the two aircraft and the ability to add improvements to the Super Hornet to make it comparable to the Joint Strike Fighter.

At the SASC hearing today, Navy Director of Air Warfare (OPNAV N98) Rear Adm. DeWolfe Miller made clear that the Navy would not be choosing between the two.

“I get the question a lot, tell me about this F-35 versus F-18. And I say, it’s not a versus. The complementary nature of both these aircraft in the future for our Navy, our aircraft carrier Navy, is very exciting.”

At the hearing, Miller, Deputy Commandant of the Marine Corps for Aviation Lt. Gen. Jon Davis, and Naval Air Systems Command commander Vice Adm. Paul Grosklags agreed the F-35C and B development and fielding were going along well.

For the Marine Corps, which is already operating its short takeoff and landing variant overseas, the cost of operating the aircraft has proven to be less than predicted. Davis said the Marines still hired an outside firm to work with the service, airplane manufacturer Lockheed Martin and engine manufacturer Pratt & Whitney to identify even more cost savings in operating and maintaining the F-35Bs.

“Right now it’s costing me a heck of a lot of money to fly the legacy airplanes and get readiness out of them,” Davis said, but “the F-35 has got a high readiness rate for us right now; also too we’re working at driving cost per flight hour down and the [operations and sustainment] costs out.”

“We have a winner on our hands,” he said and added that the Marine Corps would share lessons learned with the Navy and Air Force to help reduce costs for operating the F-35A and C models as well. 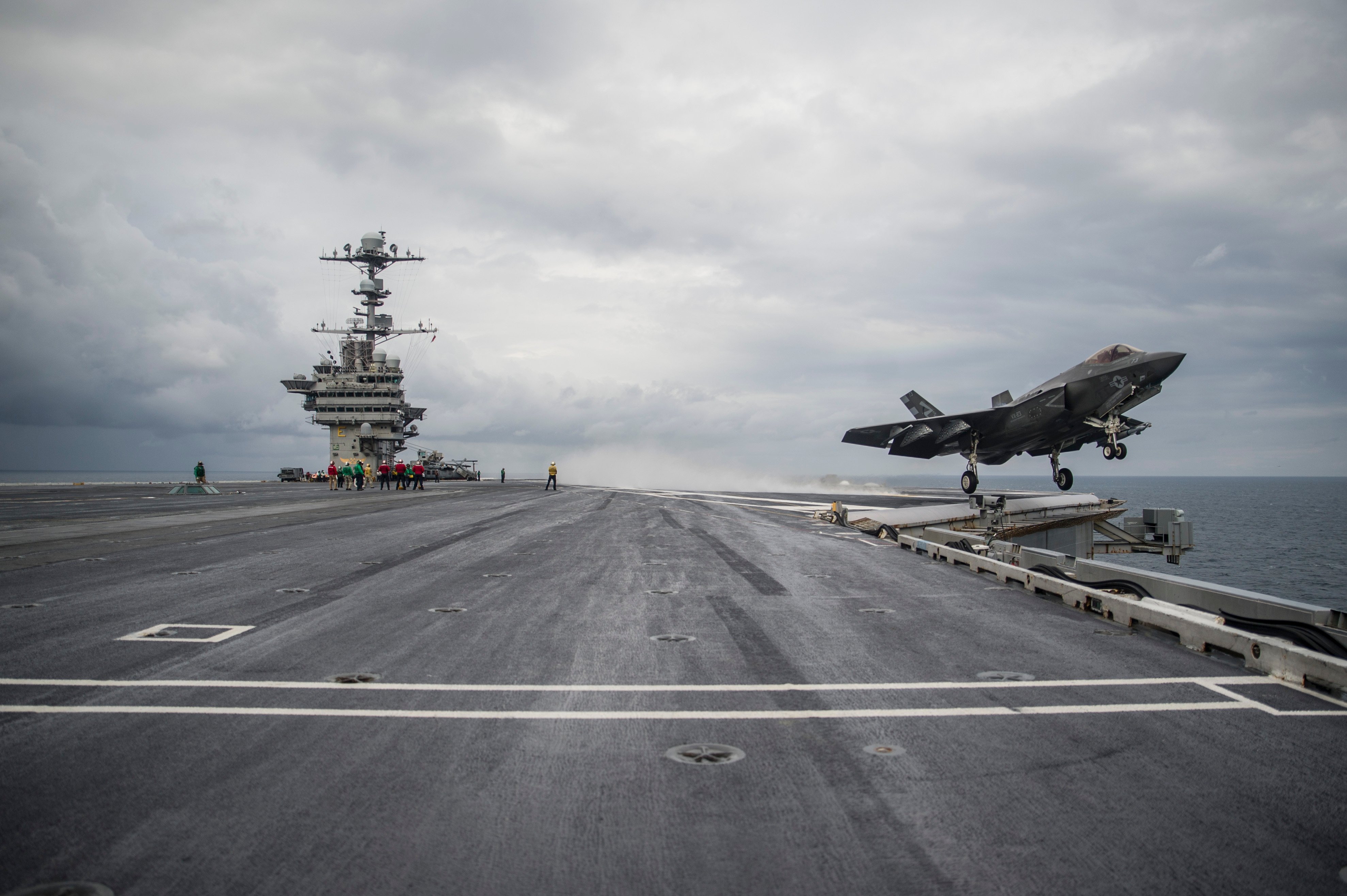 The F-35C is still awaiting the 3F software upgrade before beginning final test and evaluation and working towards reaching initial operational capability. Grosklags said at the hearing that “in terms of the (software) development process, we’re on very solid ground.”

“As we want to get to the final 3F software configuration before we introduce the aircraft in the Navy, we’re very closely watching the stability. And we have seen over the last year to 18 months the in-flight stability go from where they were having to system-reset or having to do something with the system in-flight from about every five hours, to the most recent software release is about every 40 hours, which is more than acceptable for us right now,” he said.

Miller said that early shipboard testing of the F-35C with previous software increments already looked promising. After about 150 carrier landings, the F-35C has seen a 100-percent rate of successfully landing on the carrier, with none of them catching the first of four arresting wires, which is typically the most dangerous of the four to catch.

“It was a dream to bring aboard,” Miller said. On the plane’s capability, he said “the fact that we’re getting super-sonic stealth, data fusion, the sensor-netting that this airplane is going to be able to provide, it adds capability, lethality and survivability, not just to the air wing but to the entire carrier strike group – the way we integrate it with our Aegis ships and our Baseline 9 configuration, the way we fight it alongside our .. E-2D [Advnaced Hawkeyes] and with the capability of a [EA-18G] Growler.”