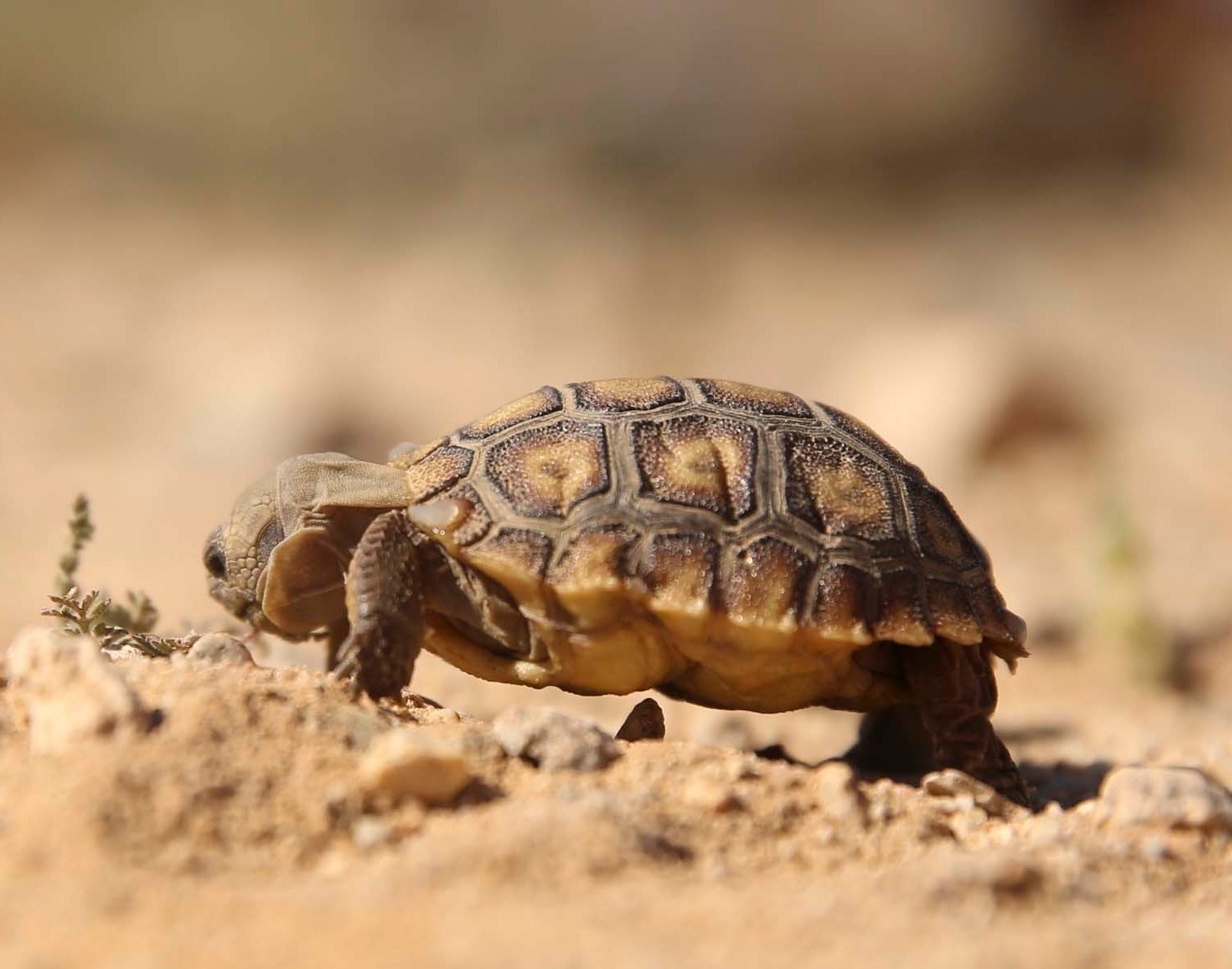 As military missions go, this one is unique: Relocate desert tortoises inhabiting desert land eyed to train Marine Corps brigades to safer areas away from human activity and military training.

By the sixth day of a two-week effort, the Marine Corps was almost halfway through its goal to relocate about 1,100 tortoises in a “translocation” program to re-home desert tortoises from its recently-expanded Marine Corps Air Ground Combat Center at Twentynine Palms, Calif. The combat center is the Marine Corps’ premier training center for desert warfare and houses numerous live-fire, maneuver and urban warfare ranges and operating bases where units train before they are certified to deploy overseas. 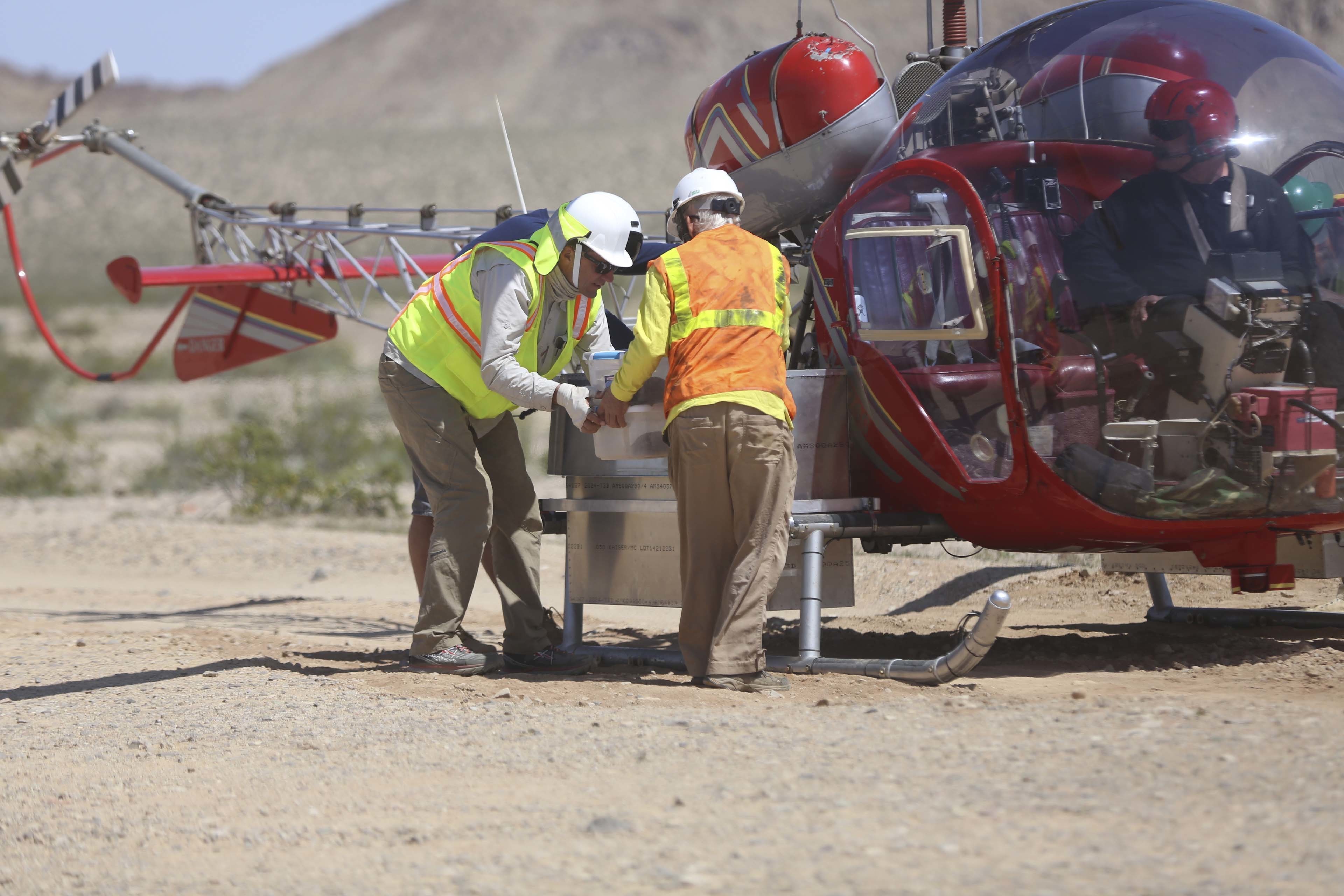 Employees from Natural Resources and Environmental Affairs, remove empty bins for desert tortoises from a helicopter during the Desert Tortoise translocation on April 10, 2017. US Marine Corps Photo

But the home of the desert tortoise, which is federally listed as a species “threatened” with extinction, includes those swaths of the Mojave desert.

The relocation plan began April 8, when 125 biologists fanned out to find the first group of desert tortoise in the expansion areas of mostly federal recreation desert lands west and south of the existing base. They located the tortoises, and each got a full health assessment, including blood work and a physical exam, food and water. The following day, a helicopter piloted by a biologist carried bins bearing tortoises to their new homes in one of five sites within MCAGCC or nearby federal lands. 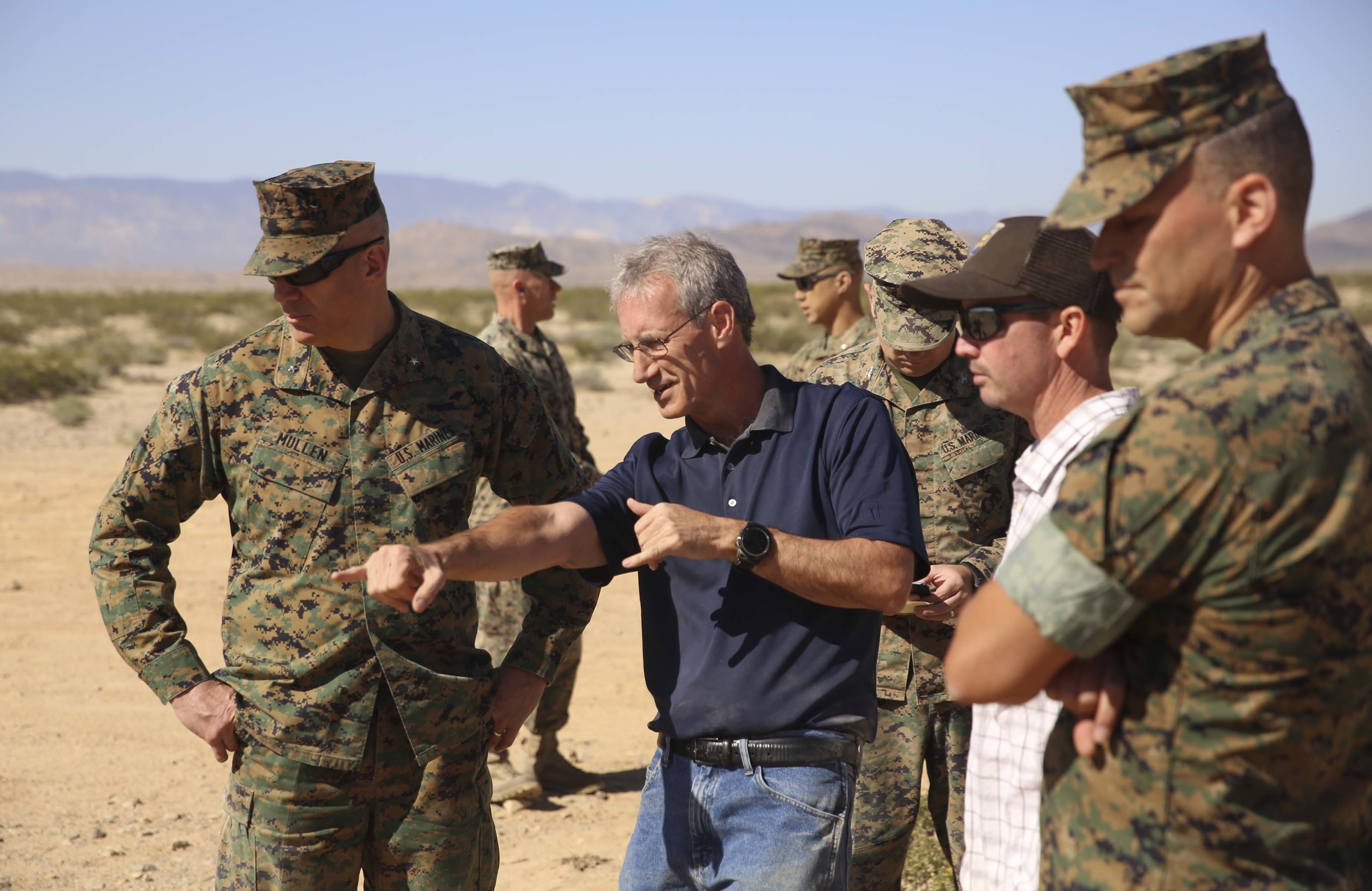 On Wednesday, 98 tortoises — all tagged with transmitters and ranging in age from about six to 60 years– were taken to their new future homes, or “receiving site,” via a contracted helicopter, officials said.

“This is the last recovery requirement before we can proceed with full-scale use” of the expansion areas, Walter Christensen, conservation branch head of the center’s Natural Resources and Environmental Affairs division, told USNI News on Thursday.

Over the past two years, biologists had placed radio transmitters on the shells of tortoises marked for relocation. Last year’s planned relocation was stymied by California’s extended drought, which shorted the water and growth of plants that provide the tortoise’s nourishment and lifelines. Legal challenges by conservation groups also put the brakes on the Marine Corps’ airlift plans. Those delays had hampered the service’s initial plans to enable brigade-sized forces to conduct the first large-scale exercise in August 2016. 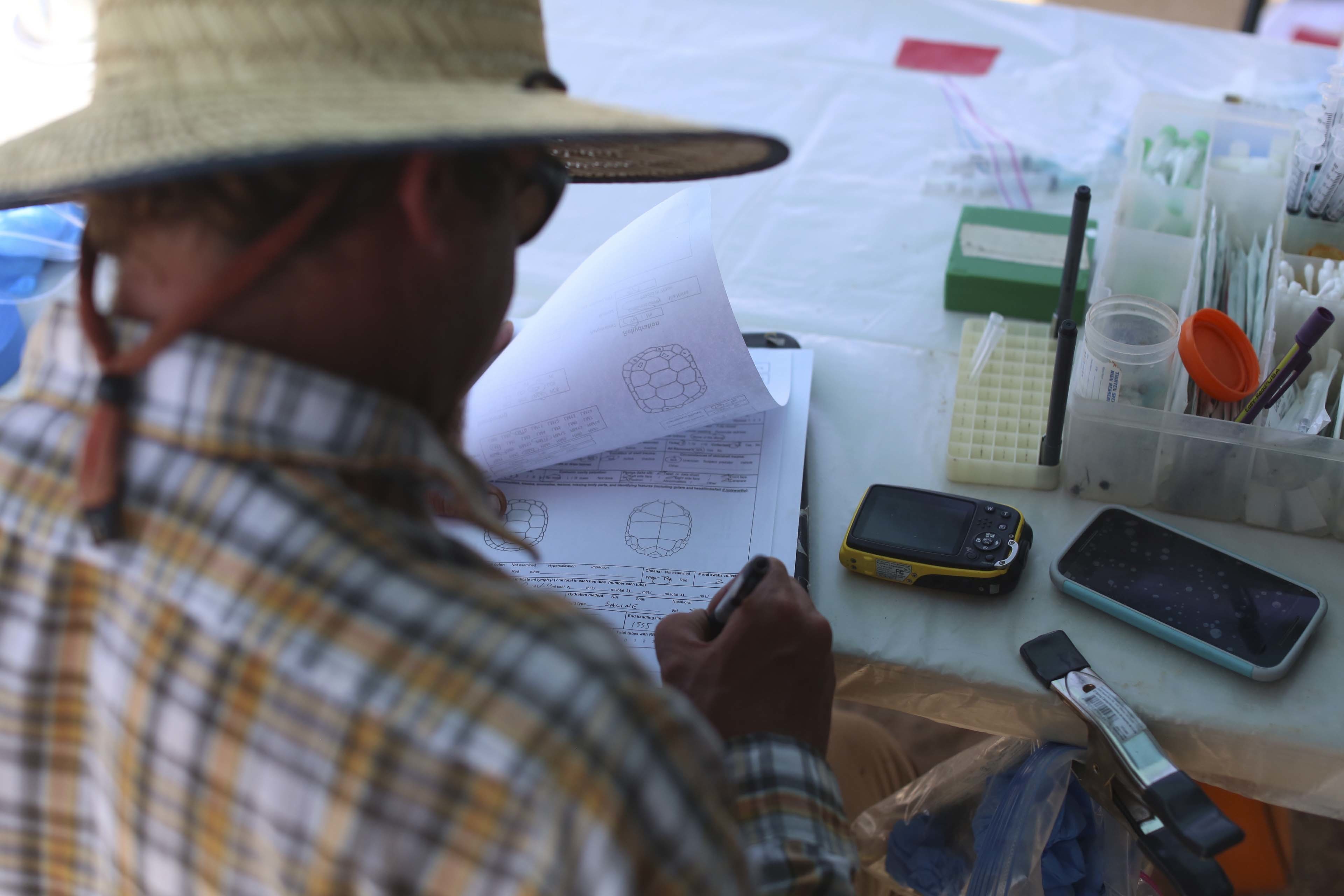 A biologist with Natural Resources and Environmental Affairs, conducts a health assessment during the Desert Tortoise translocation on April 10, 2017. US Marine Corps Photo

It’s no small feat to find new homes for the desert tortoise, whose native region in the Mojave is besieged by increasing human activity, development, diseases, commercial and energy uses and recreational off-roaders. Then there’s the threat from predators: Ravens, coyotes, even jackrabbits who find the soft underbellies of fledgling juvenile desert tortoises a tasty treat.

Yet the tortoise has found kin among Marines. For more than a decade, the Marine Corps has taken point in finding better ways to ensure survivability and viability of the critters.

Desert tortoises found to be too small to relocate instead are placed in holding pens at the combat center’s Tortoise Research and Captive Rearing Site, Christensen said. The site, known as TRACRS, covers about six acres and houses large fenced pens where clatches of eggs and juveniles are housed and monitored as part of a long-running study with the University of California. TRACRS, considered by some as the tortoise’s “head start” program, was established in 2006. 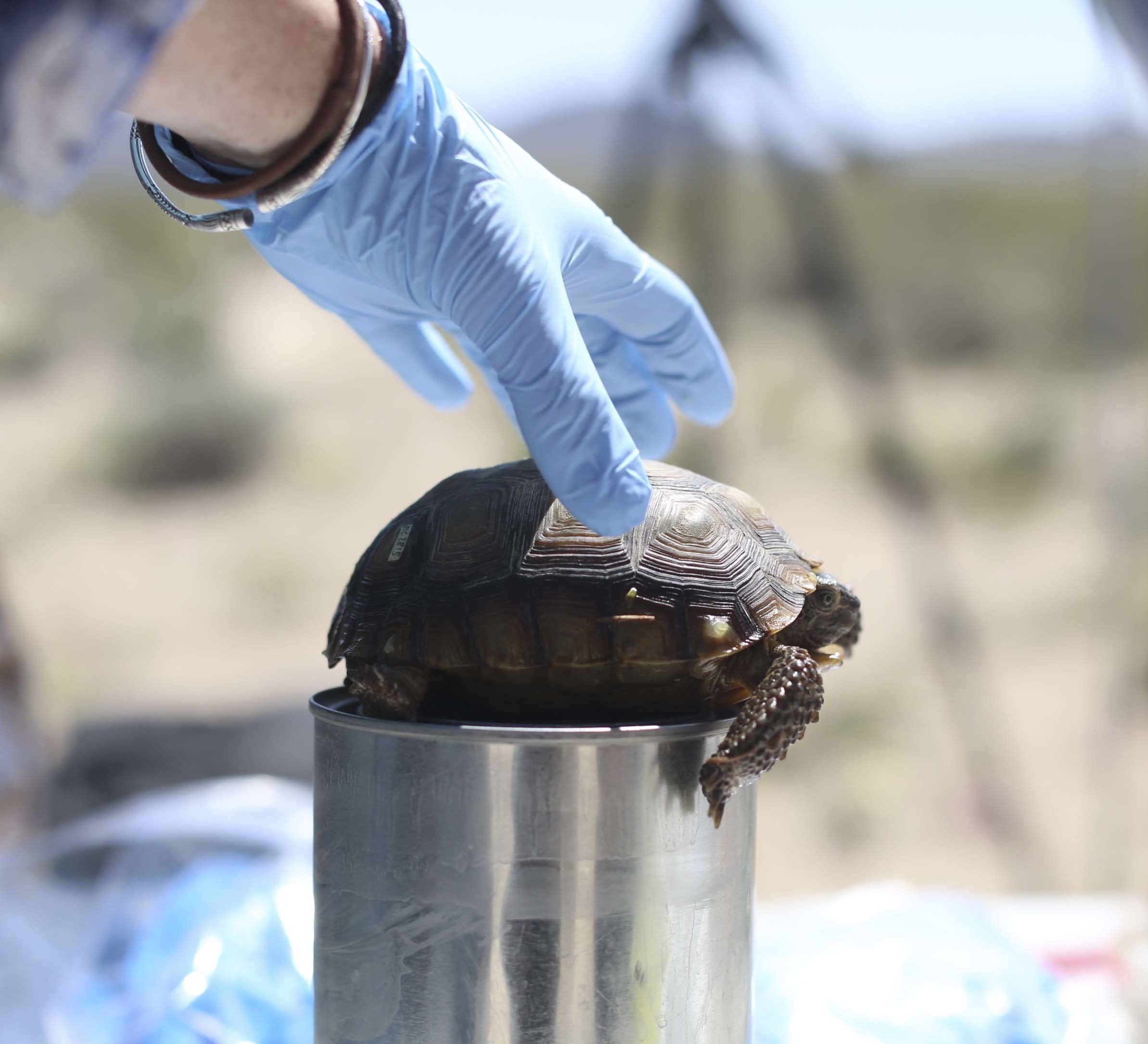 Biologists with Natural Resources and Environmental Affairs, weigh a desert tortoise as part of a health assessment during the Desert Tortoise translocation on April 10, 2017. US Marine Corps Photo

The first group of 35 TRACRS tortoises was released in October 2015, but the region’s drought delayed a planned spring 2016 release. Recent rains across California sprouted more native plants across the desert, so, in March, a second group of 50 tortoises were moved from TRACRS to new habitats, Brian Henen, a combat center biologist and resident tortoise expert, told USNI News. About 390 tortoises remain in the pens at TRACRS, Henen said.

The Marines’ relocation program had come under legal challenge by conservation groups, some who pointed to failed previous attempts by the Department of Defense to save tortoises by moving them from military training areas in California, at Fort Irwin and Edwards Air Force Base. The Marine Corps “learned from past lessons,” Christensen said, adding it “took the time to do it right.”

“People feel very strong about the tortoise,” he said. “The tortoise is very charismatic. We are pretty careful about what we do here.”

The service has funneled money and focus into ways to improve the odds of tortoise survivability, including TRACRS and its long-term study and tracking and the relocation program once Congress approved the combat center’s expansion into mostly former federal lands controlled by the U.S. Bureau of Land Management. For the relocation mission, combat center officials followed U.S. Fish and Wildlife guidance that provided methods to up the odds that the tortoises could persevere against predators and manage in their new environment. 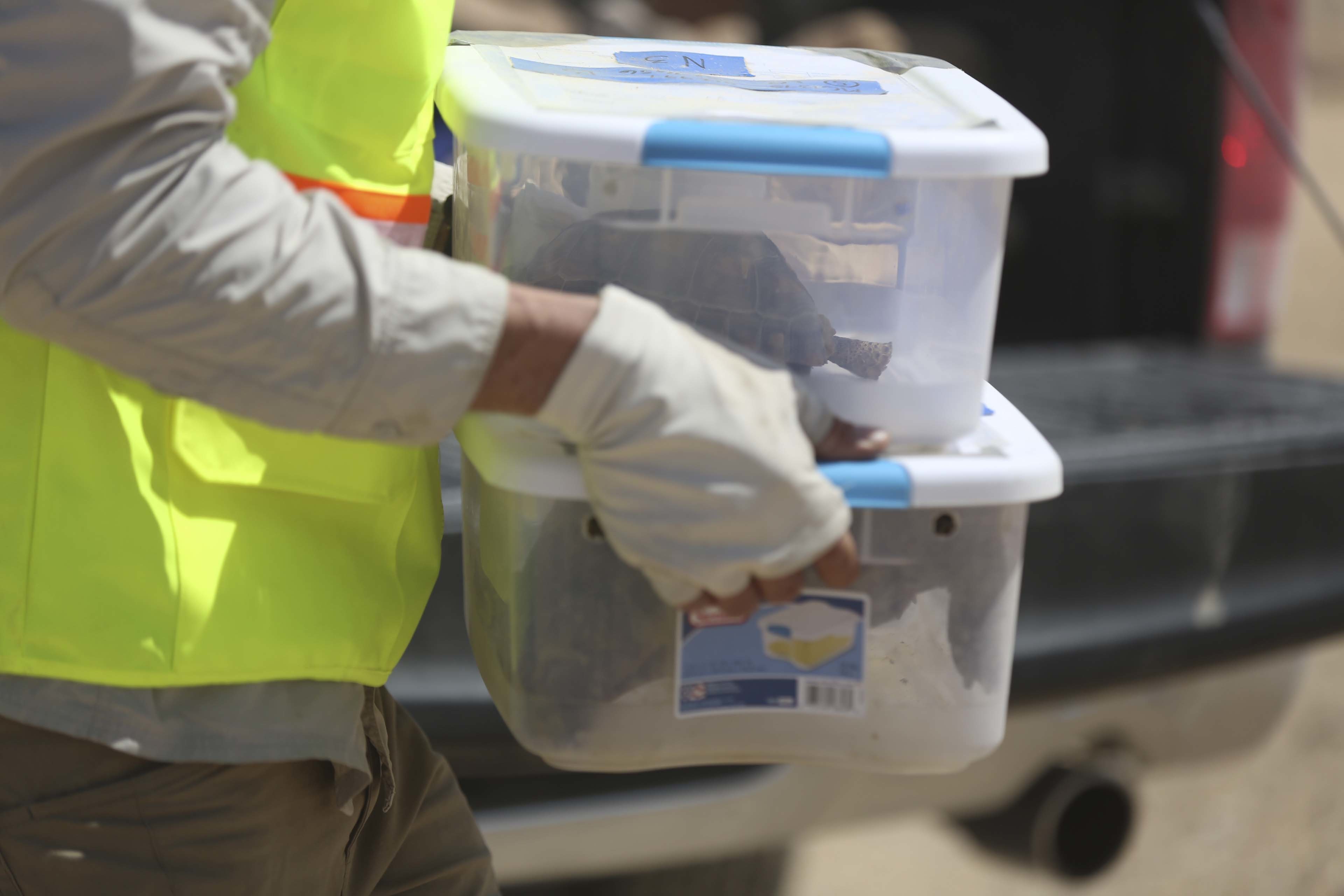 An employee with Natural Resources and Environmental Affairs carries desert tortoises to a helicopter to be transferred to a recipient site during the Desert Tortoise translocation, April 10, 2017. US Marine Corps Photo

Biologists had affixed transmitters to each desert tortoise, which enabled tracking and monitoring and helped identify any social groupings of tortoises that could be moved together. The Marine Corps will track these tortoises for 30 years, with consistent tracking for the first five to 10 years, Henen said, adding, “we are committed to doing 30 years.”

Tortoises were moved from areas in the Western Expansion Area, west of the main combat center, to five areas 15 to 20 kilometers away but within the training base or on BLM-controlled lands, all identified as supportable tortoise habitat. “We are not fencing these areas off,” Henen said. A smaller number, about 85, will be moved from the combat center’s Southern Expansion Area in the upcoming week. It’s uncertain whether tortoises would return or venture to lands busy with military activity or remain in their new areas, but by their nature they tend to stay within six miles or so of their location. “The tortoises are mobile,” Christensen said, “but yes, they are slow.” 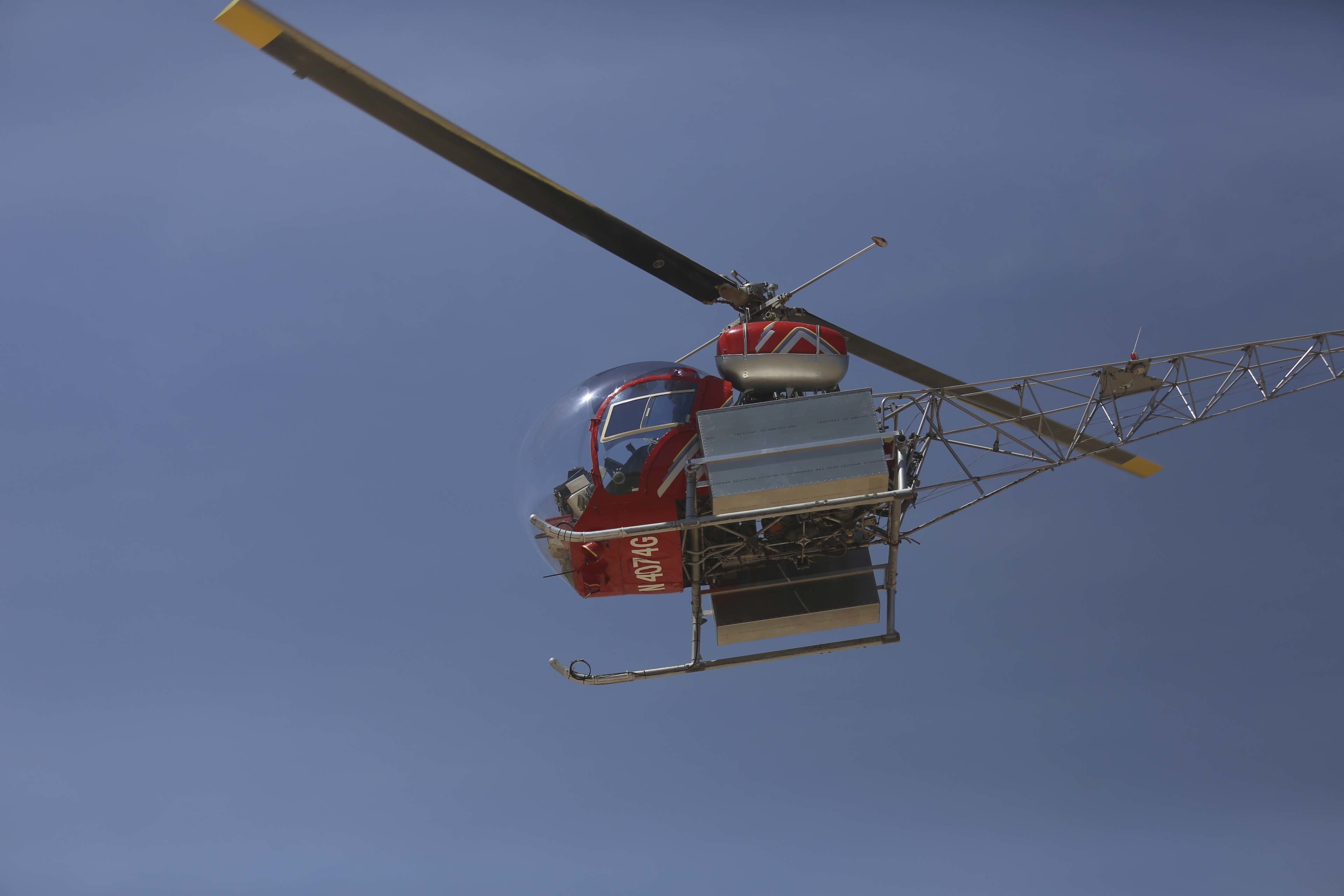 A helicopter transfers desert tortoises to a recipient site via helicopter during the Desert Tortoise translocation on April 10, 2017. US Marine Corps Photo

That lack of speed makes them vulnerable to coyotes and ravens. Ongoing efforts are trying to track and control the raven assaults, official said. Those ravens found to target tortoise nests can be removed by Fish and Wildlife Service personnel, Christensen said. Coyotes, which frequent the combat center, also are targeted by existing base regulations. In recent incidents, Christensen said, a Marine training in the field was bitten, and several base residents reported attacks on their household pets by coyotes.