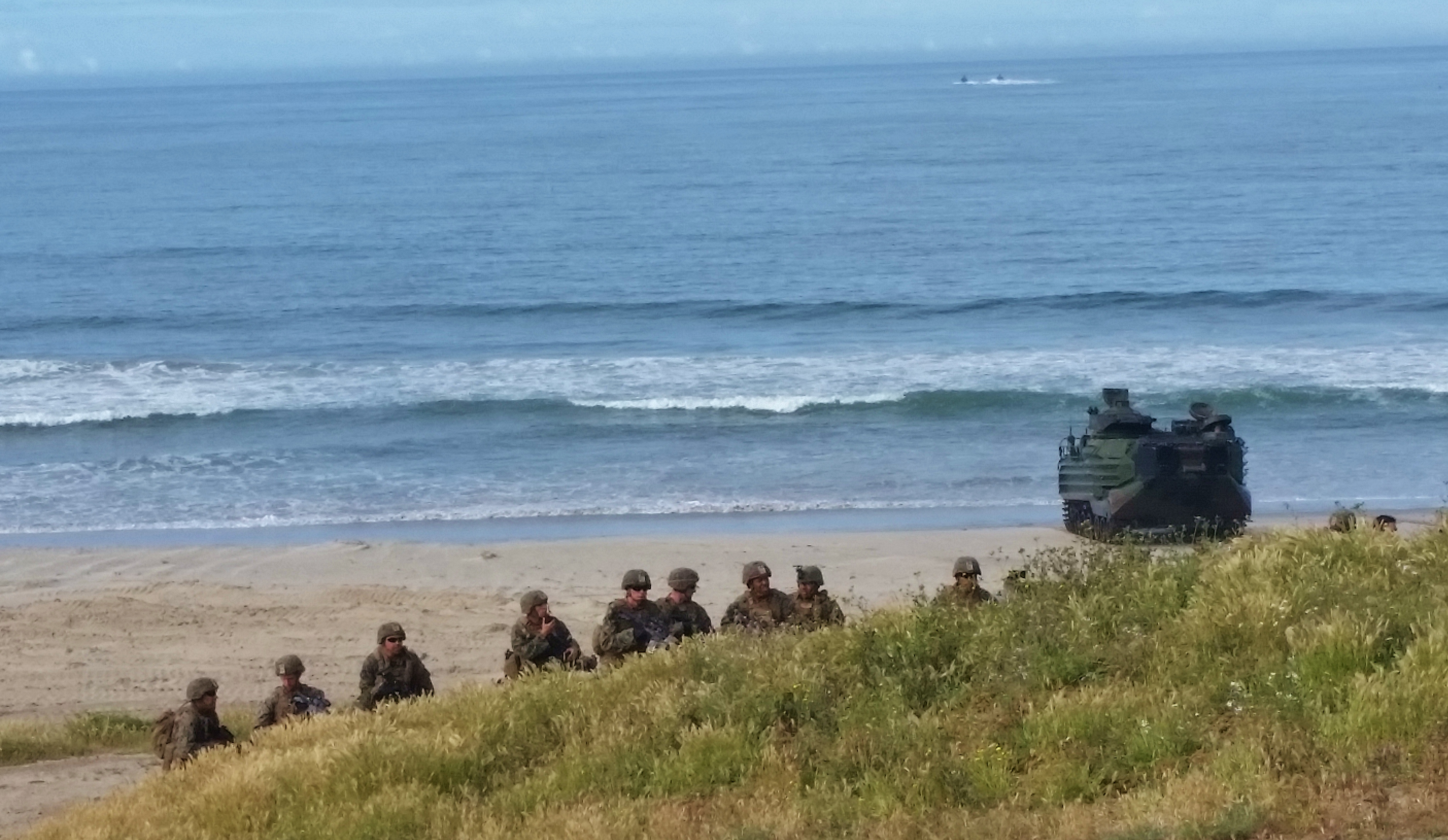 A previous version of this story had the incorrect hull number for USS America. The correct number is LHA-6 not LHA-8.

CAMP PENDLETON, Calif. – Amphibious transport dock USS San Diego (LPD-22) slid into the thin, offshore fog bank as two waves of amphibious assault vehicles swam toward the sandy bluffs Thursday morning. Within minutes, several dozen combat-equipped Marines rushed from the ramps and made their way into a nearby village.

It wasn’t long before the sounds of gunfire and rocket-propelled grenades – simulated, for the most part, for this amphibious assault training mission – drew in the Marines in their mission to clear the village of “enemy” fighters or terrorists and perhaps capture one man considered to be a high-value target.

The mission didn’t go without casualties as the Marines’ fire teams with the 15th Marine Expeditionary Unit moved through the dusty village, snaking into doorways to search rooms and, occasionally, aim their weapons at gun-toting fighters.

Several Navy landing craft, air cushioned (LCACs) raced to shore, bringing reinforcements of Marines in light-armored vehicles and Humvees to the outskirts of the village as an AH-1Z Super Cobra attack helicopter and UH-1Y Huey helicopter provided close-air support overhead. One hour and several dead fighters later, the Marines with Alpha Company, Battalion Landing Team 1/5, regrouped near their AMTRACS as exercise controllers wrapped up the scene. 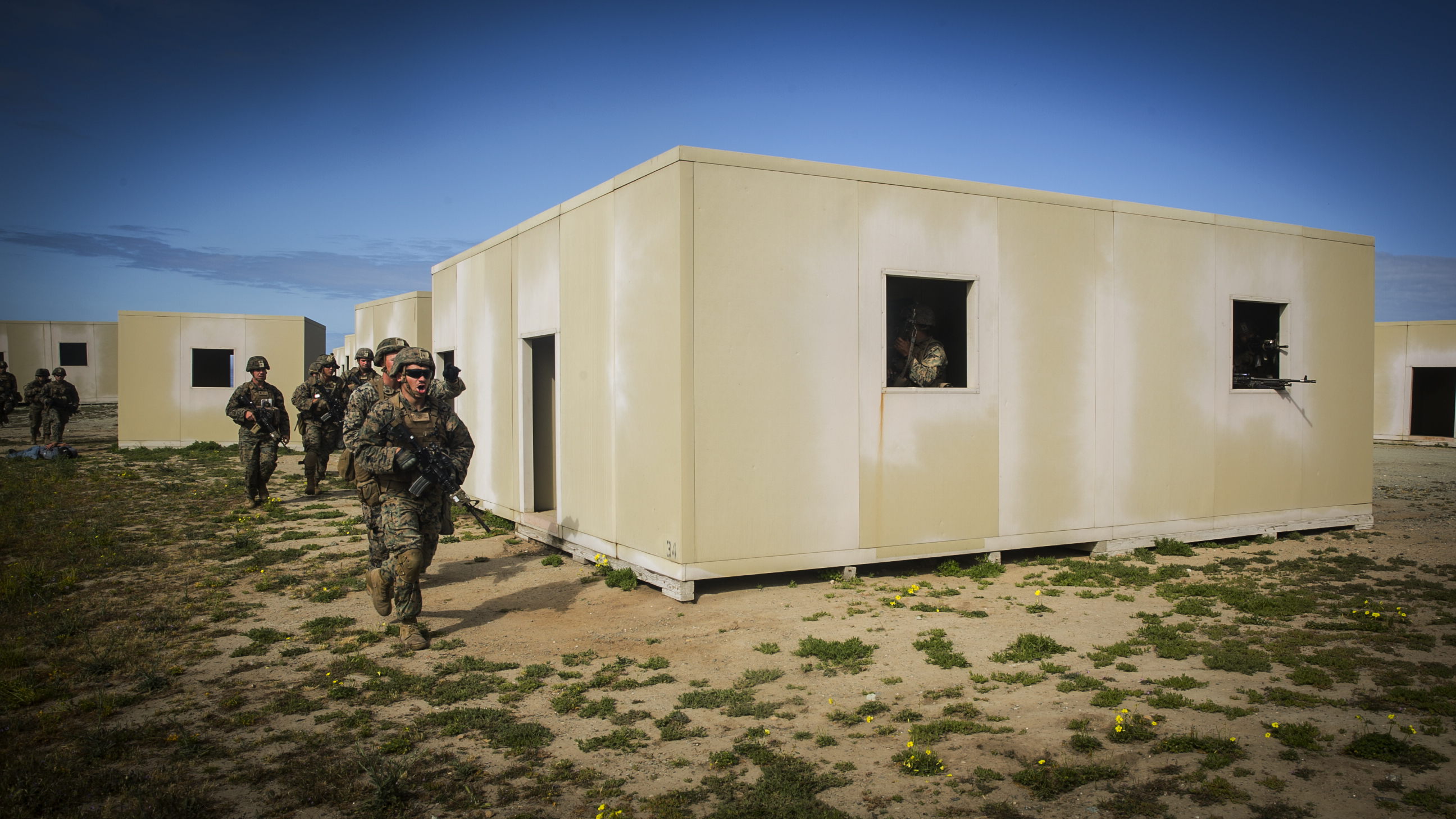 The amphibious assault exercise, held at Camp Pendleton’s Red Beach training area, was the culminating event of the 10-day integration exercise called PMINT. The PHIBRON-MEU Integration exercise is the first at-sea training period for the 15th MEU and its amphibious ready group led by Amphibious Squadron 3 and the first time Navy blue and Marine green forces come together to conduct missions from their ships at sea.

The 2,500-member 15th MEU got underway with the America ARG, boarding amphibious assault ship USS America (LHA-6), dock landing ship USS Pearl Harbor (LSD-52) and San Diego from the San Diego Naval Base for the first at-sea training, which ended April 13. The America ARG and 15th MEU are due to deploy to the western Pacific and U.S. Central Command regions later this year.

The 15th MEU last month completed a RUT, or Realistic Urban Training exercise, held in downtown Phoenix, Ariz., and at the Marine Corps Air-Ground Combat Center in Twentynine Palms, Calif. The exercise, which ran from March 6 to18, brought MEU elements together in several urban warfare scenarios. It included a helicopter raid to the desert base and a nighttime ship-to-shore raid mission by the MEU’s Maritime Raid Force. “We did that through full combat, with real live bullets flying down,” said 1st Lt. Maida Zheng, the 15th MEU spokeswoman.

Throughout the predeployment exercises, the Marines “continue to refine their skills and get better as a team,” said Lt. Col. Richard “RAKE” Alvarez, 15th MEU’s executive officer.

The ability to come from the sea and land ashore to seize an objective remains a core skill among 13 essential missions the Marine Corps’ MEUs are expected to do when they deploy overseas as part of an amphibious ready group. While Marines haven’t done large-scale amphibious assaults, under fire, since Korea, the mission helps train them to seize smaller objective areas with likely enemy activity, Alvarez said. 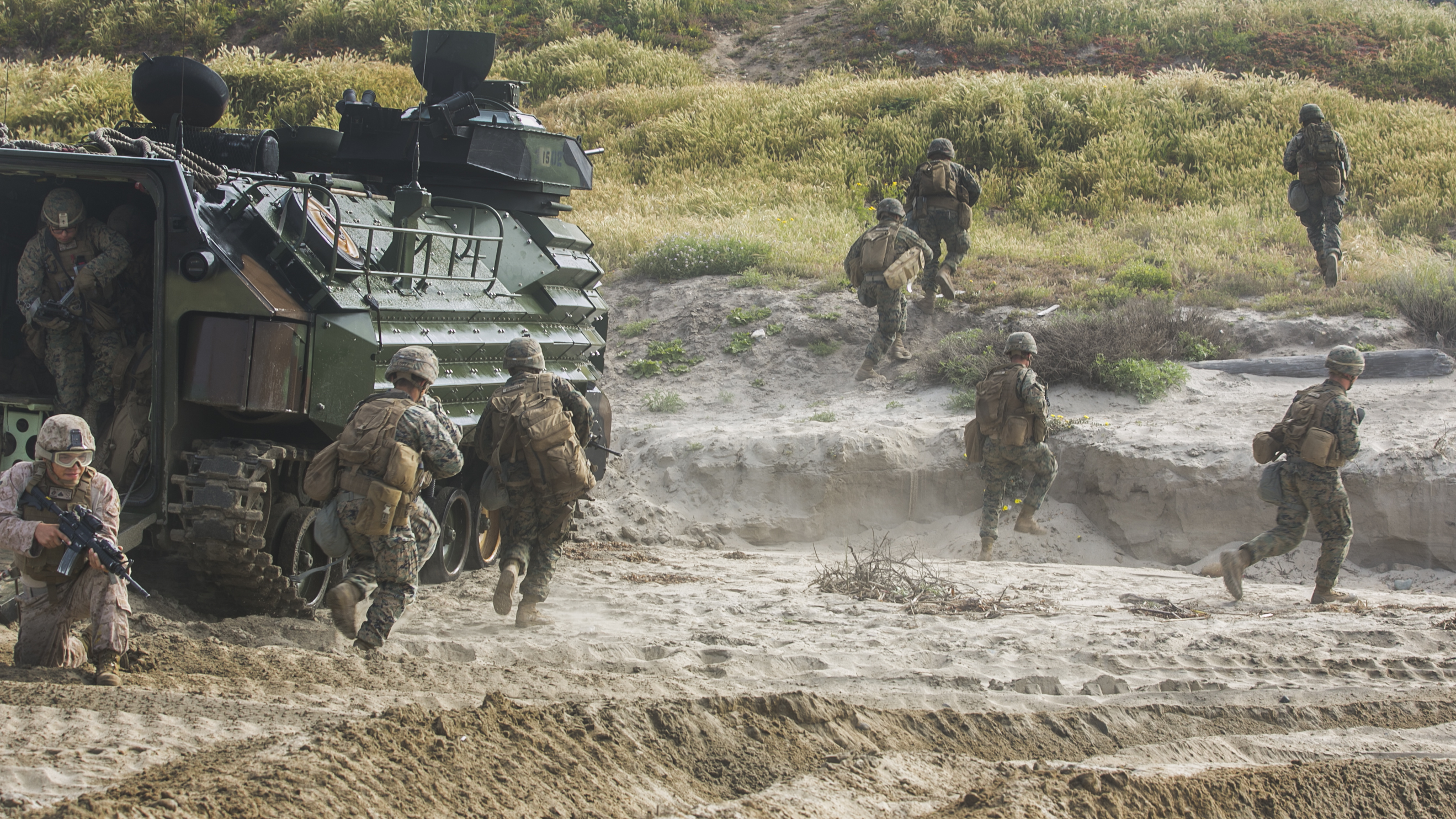 Training missions, including the amphibious assault, are designed “to get our Marines and our sailors in a place where they have to make decisions,” he said, adding, “We try to mimic the operating environment as much as possible.”

For Thursday’s mock amphibious assault, that included a lightly-armed group of enemy fighters who tried to fight off the Marines, albeit unsuccessfully. The assault was designed to provide some authenticity, with the opposition force equipped and outfitted “to sort of mimic the adversary that we’re going up against,” said Capt. Andrew Paul, the 15th MEU’s officer-in-charge of exercise control. “The more realistic training that we give them, the better.“

“The challenge at this point right now is observing and gathering that intelligence,” Paul said, adding, “we will continue to grow, so as we grow as an ARG/MEU team… we get a little bit more accomplished.”

The upcoming deployment marks the maiden operational overseas deployment for America, which is home to a larger aviation component than the existing fleet of big-deck amphibious ships that have well decks that house Navy landing craft. Joining America are San Diego-based ships, San Diego and Pearl Harbor. “It doesn’t get more American than that,” Zheng said. “It’s going to be an epic deployment for us.” The 15th MEU is composed of Battalion Landing Team 1st Battalion, 5th Marines; Marine Medium Tiltrotor Squadron 161 (Reinforced) and Combat Logistics Battalion 15.