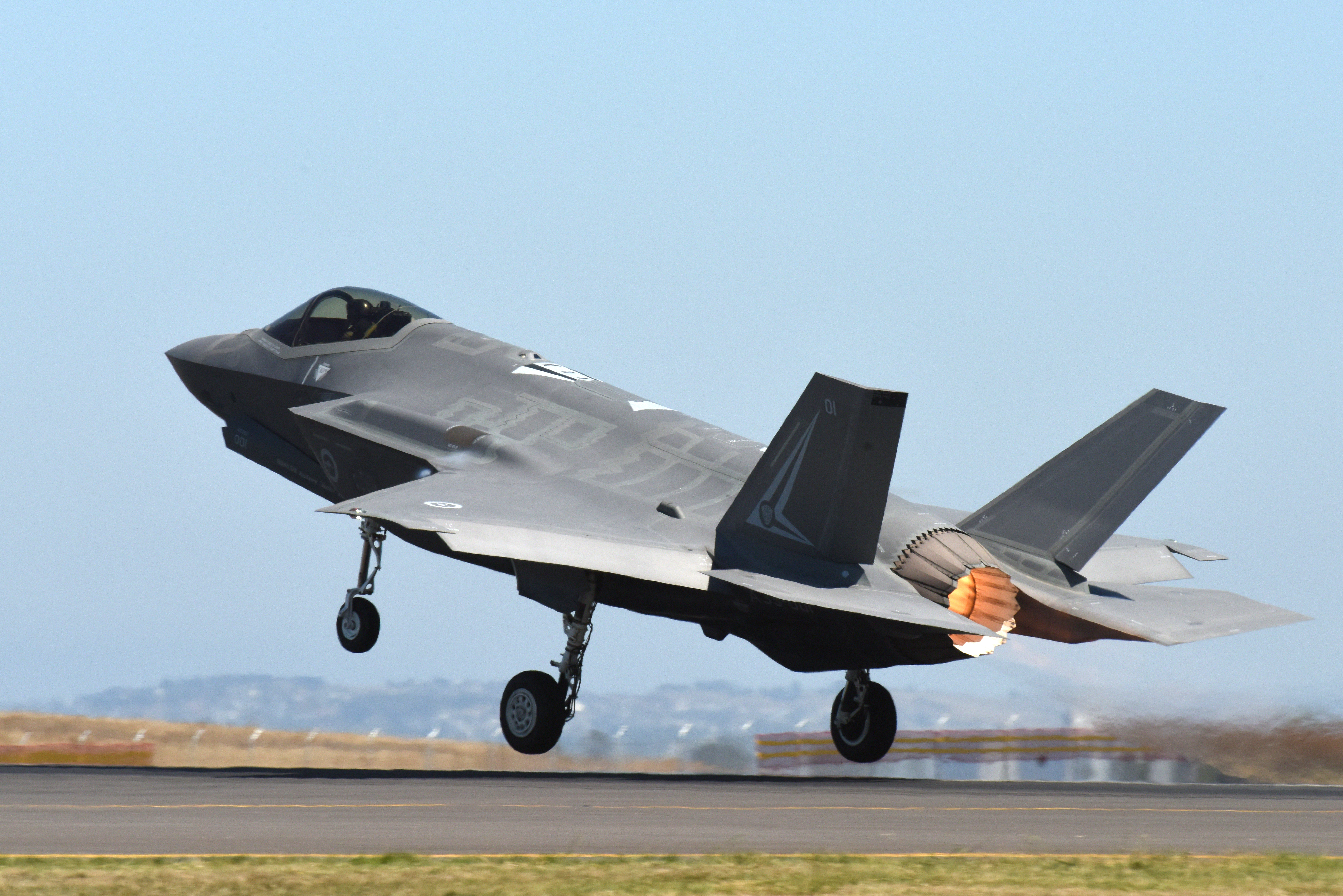 An F-35 Lightning II stationed at Luke Air Force Base, Ariz., departs the runway during the Australian International Airshow and Aerospace & Defence Exposition (AVALON) on March 4, 2017, in Geelong, Australia. US Air Force photo.

This post has been updated to include information from U.S. Marine Corps Forces Pacific.

Current and future F-35 Joint Strike Fighter operators met this week to discuss plans for leveraging the fifth-generation airplane in the Pacific.

About 90 representatives from the U.S. Air Force, U.S. Navy and U.S. Marine Corps, as well as from the Australian, Japanese and South Korean militaries, attended Pacific Air Forces’ (PACAF) inaugural F-35 Symposium to discuss “enhancing F-35 operations in the Pacific, sharing fifth-generation lessons learned and building a foundation for future F-35 bilateral and multilateral engagements” more broadly, and specifically “bed down, integration, logistics, sustainment and combat operations,” according to a PACAF news release.

“This symposium marks an exciting new chapter in Pacific combat capability,” Air Force Brig. Gen. Craig Wills, PACAF’s strategy, plans and programs director, said in the news release.
“Together, our joint and international partners have introduced the most capable combat aircraft in the world to the Pacific.”

The Marine Corps permanently moved its first squadron of F-35Bs to Japan at the beginning of the year, and many more developments for JSF operations in the Pacific are set to take place soon. By the end of next year, the Republic of Korea will have received its first F-35; Japan will have its first domestically built F-35A, after the Japan Air Self Defense Force completed a first solo F-35 sortie by a Japanese pilot, crew chief and team of maintainers last month out of Luke Air Force Base in Arizona; and Australia will have its own F-35s stationed in the country, after two Australian F-35As flew from Luke AFB and debuted at the Avalon Airshow outside of Melbourne earlier this month. 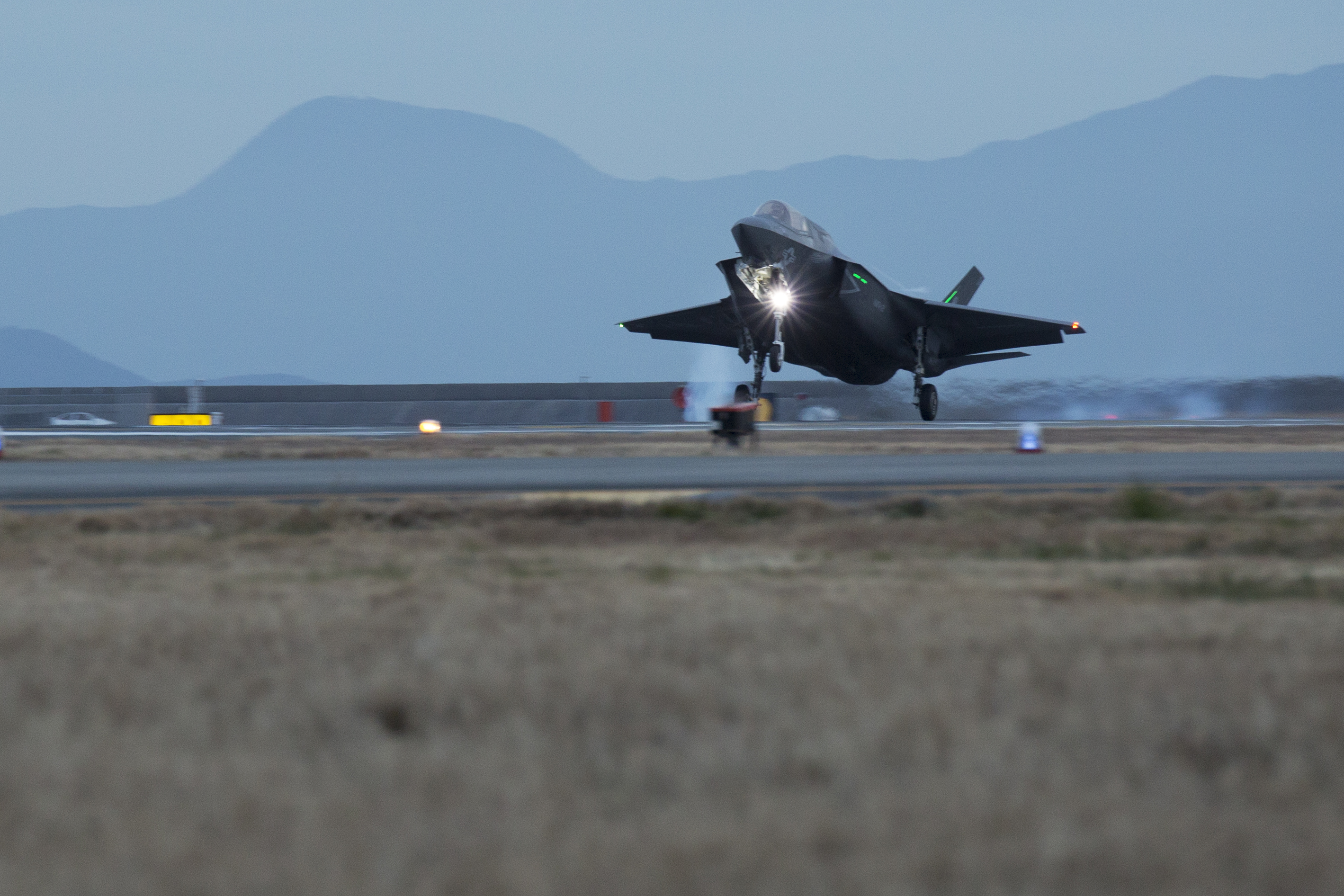 In part due to these milestones, it is “a perfect time to have a meeting to discuss ways to enhance interoperability and cooperation amongst the F-35 community,” JSF program office spokesman Joe DellaVedova told USNI News.
“The F-35 will be the backbone of future joint and combined air operations, enabling critical interoperability. When pilots from different nations fly the same platform, they talk the same language. Successful joint and combined operations are assured well into the future through the F-35’s foundational interoperability.”

For the Marine Corps, which is furthest along in operating its F-35s forward, “we’re in both soak-up and transmit mode,” Lt. Col. Mark Bortnem, U.S. Marine Corps Forces Pacific Training and Operations (G-3) Air Officer, told USNI News by email this week.

“There are different discussion groups at the symposium, with topics ranging from initial delivery of aircraft and setup of squadrons to deployments and maintenance. We’re looking for the Air Force’s perspective on how to establish information-sharing roles with key partners in the Pacific,” he said.
“At the same time, we’re looking to share information that the Marine Corps has learned as the first forward-deployed operating force. Our objective is to share what we’ve learned over the past five years since we first stood up in Yuma, Arizona, on how we got to where we are.”

Particularly being the first service to operate in the Pacific, the Marine Corps’ ability to develop the right relationships will be important, Bortnem said.

“I view the F-35 symposium as the beginning of what I anticipate will be an enduring relationship between the U.S. services involved and with foreign partners,” he wrote.
“We are beginning the conversation of how to continue to introduce this incredible weapon system, and how that ties into planning exercises and bilateral/ multilateral engagements, and fostering relationships, both joint and combined.”

Eleven countries will eventually join the U.S. in F-35 operations, including Canada, Israel and six European partners. Six of the 12 countries have already received their first jets, according to manufacturer Lockheed Martin, and all nine of the original participants’ industrial bases are involved in production.

For Bortnem, having so many important partners – let alone the sister services – operating the same airplane will create countless opportunities for collaboration that were never possible before.

“The F-35 symposium highlights an important characteristic of the F-35 itself – it’s a weapon system shared between not only U.S. military services, but also foreign militaries, in a way that no other aviation system has ever been shared. The U.S. Air Force and U.S. Marine Corps haven’t operated the same aircraft as each other before, for example, the USAF with the F-16 or A-10 and the USMC with the F-18,” he wrote.
“This time, we’re all flying different variants of the same aircraft. We are sharing information among U.S. services and with key foreign partners in a way we’ve never done before. The symposium facilitates discussion on how we’re going to set up the way we share information, of course between the U.S. Navy, Air Force and Marine Corps, but also with our partners, in this case, Japan, the Republic of Korea and Australia.”